posted 10 months ago
Mike, maybe you need to get here a day earlier to make adjustments to get everything just the way you want.  :)

posted 10 months ago
I'm fine with that as long as it doesn't get built upon further (lights, trim, etc) that make it harder to move in the future...

Thanks Mike! As far as I know, we aren't planning on any adjustments that will make the ladder harder to move. I think your point is valid though, we hadn't considered someone being taller than the twin bed there. I'll see if I can pop it over to the side when I have some free time.

Today it was truly rainy for the first time since I've been at Wheaton labs. Take a look at the normal view (1) and compare it to how limited the view is in the rain (2). I never realized how much rain could block visibility when it was just a light shower.

So, due to the rain, we did some indoor work and then some meetings. For the indoor work, we did some cleaning and I got a chance to work on some tool maintenance. Pictures 4 and 5 show the rocket mass heater in the shop getting some cleaning. Picture 5 is me doing some chainsaw sharpening, I have the pictures I need to get the BB for tool care, but I'm not sure if I should post them. The teeth on this chainsaw were really worn down and this will probably be the last sharpening on it before it gets replaced. So, I feel like the sharpening I did doesn't really count. I'm also not sure how good the sharpening I did was, since this was the first time I've ever sharpened a chainsaw.

Anyway, the rest of the day was filled with meetings! We met as a boot camp with paul to discuss priorities and short-term goals. I'm sure most people would find that boring, but I actually enjoyed it haha. I'm really excited by the things that we will be working on in the near future!

After that meeting was lunch and the usual scramble, then most of us filed back into the library to begin talking about a dedicated effort to really getting our food systems going this year. So of course that resulted in a tour of the hugel beds near the fisher price house and discussions of plants and planting times. Right now the plan is for each of the interested boots to take command of a chunk of hugel and to tend that area like a garden. Picture 6 shows the section of Hugel I will be tending! This section is just past the gate near the front door and I'm thinking it will be great to plant lots of culinary herbs here since that will (hopefully) incentivize us to use them for all kinds of cooking. Gardening has been a growing interest for me this year and this is one of the projects I'm really looking forward to sinking my teeth into.

Tonight I made dinner (7). I made Thai Curry from scratch for the first time and I gotta say, I'm a huge fan. I'll definitely be experimenting more with this in the future. That giant cast Iron was filled to within an eighth on an inch of the rim and it pretty much all disappeared by the time dinner was done.

Tonight we also had a little talent show for culture night and it was a blast! Side Note: I feel like it should be called an exhibition of skills since that's what we're really doing. During the exhibition of skills Fred Sung, Erica danced, both by herself doing tap dance and with her partner doing swing dancing, Lara showed us some Japanese Kanji and taught us how to make an origami crane (which I personally loved, thanks Lara!), Daniel demonstrated some self-defense stuff (I was the demonstration dummy haha), I read a short story I wrote for one of the Dungeons and Dragons games I play in, and Kyle showed us how to run with good technique, which was way cooler than it sounds. It was all a lot of fun and I'm really glad I participated in it, we got all kinds of skilled people here.

Well, that was a way longer post than I wanted to write, but lots of stuff happened today haha. I'll leave you all with this lovely picture of a rainbow I saw today while discussing sawmill fixes with Josiah (8). 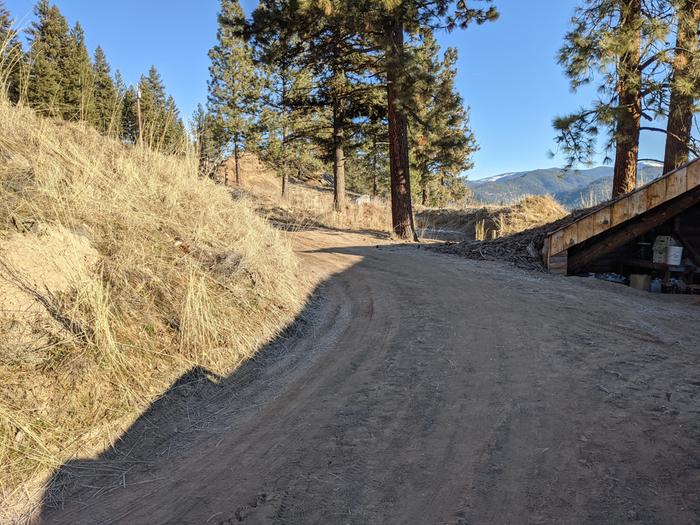 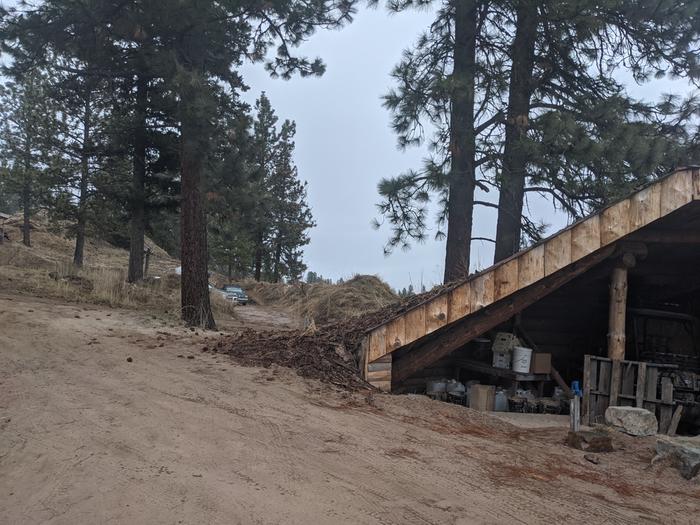 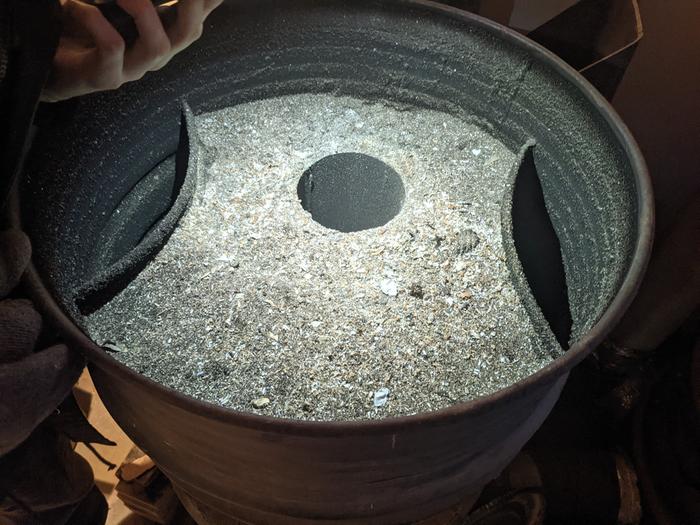 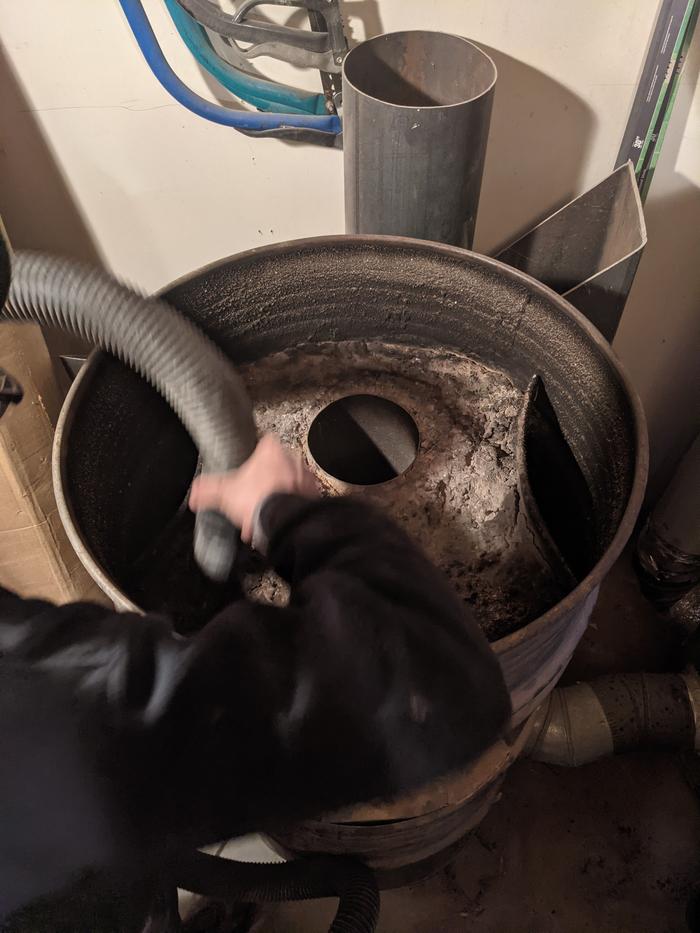 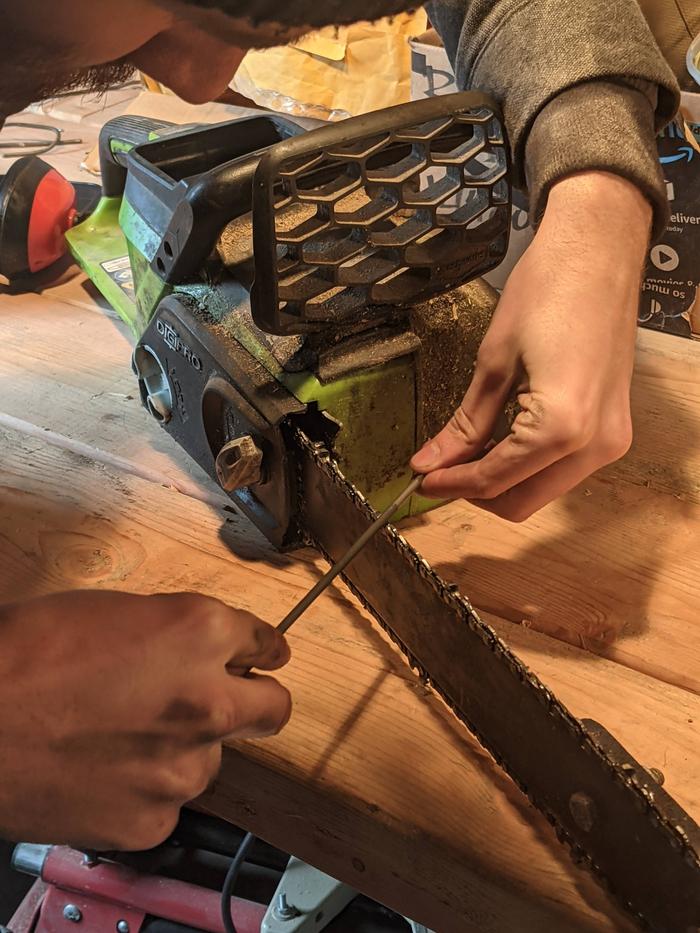 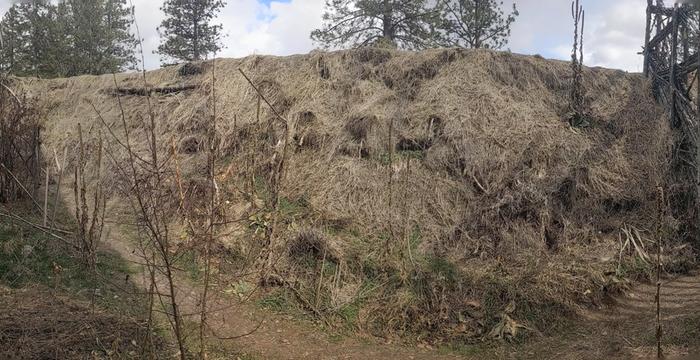 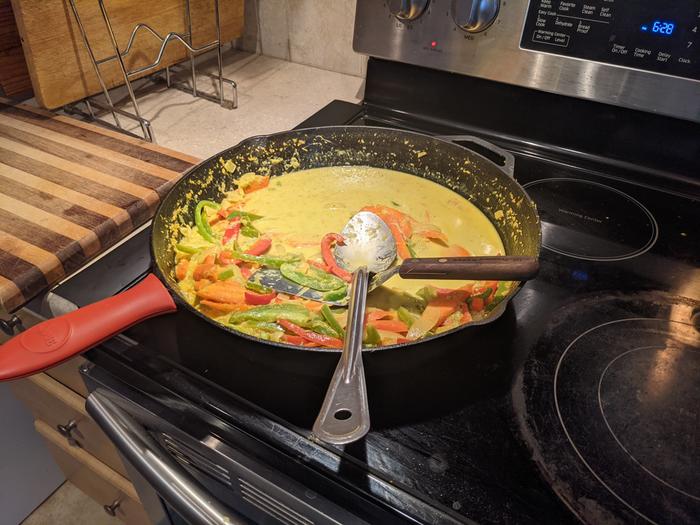 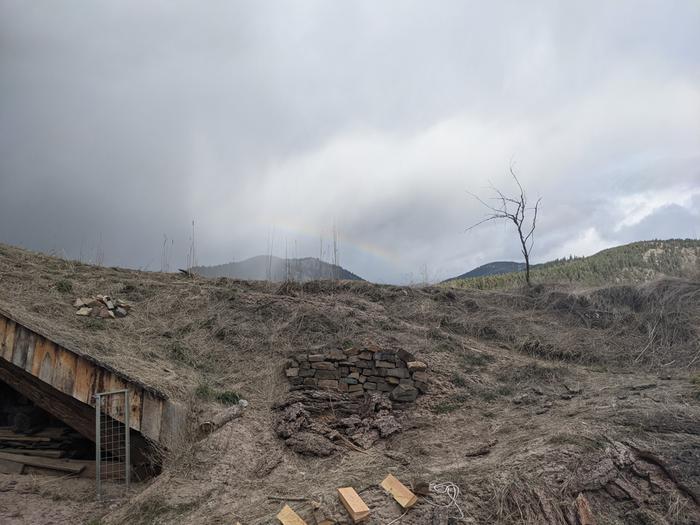 Today will be a shorter post since I have to post from my phone (laptop is updating slowly and it's bed time haha).

For the love shack, me and Dan moved the ladder this morning since it's a two person job. The ladder is actually structural and is holding up the beds on that corner. So, one person has to hold the beds level while the other screws in the ladder.

For the rest of the official workday I worked on the sawmill and most of that was reading the instruction manual. I was working on getting the blade properly aligned and so I wanted to make sure I was knew exactly what the procedure was. Eventually I made the first cut and determined the blade was off, unfortunately, we didn't have a wrench in the right size that was also thin enough to adjusts the nuts I needed to adjust. Instead of just taking off the wheel that's connected to that bolt in order to get at that bit, I decided to make a new thinner, wrench. That took most of the afternoon, but it works! And I'm ready to move on with calibrating the sawmill and have a way to make it easier for people who come after me as well.

After the work day ended, I decided to head up to the love shack to help Nine, Kyle, and Dan finish up there. Mostly I just carried down their extra tools while they wrapped up hanging the door. But after the door was hung, we found that it caught a bit on the doorframe. So I decided to stick around a bit longer and fix the catch using a hand plane, my mora knife, and some sand paper. For added measure I out on a handle. Now the love shack is looking great and the door is functional!

Today was not super eventful, but overall it was a good day.

This morning I made myself a delicious skillet hash for breakfast and ate it with eggs and some leftover cabbage and grapefruit coleslaw Josiah made last night (1,2).

Later in the morning, I met with Paul and Josiah to discuss some of the video opportunities here at Wheaton Labs and now I'm gearing up to start making more videos (hopefully). There's a lot of exciting stuff to document here and I'm definitely looking forward to polishing my video editing skills since I'd like to keep video making open as a possible passive income stream for me in the future.

After the meeting, Dan and I started working on prepping meal stuff for the Seder dinner he's going to lead us all through tomorrow. I'm not Jewish and I don't really know the religious beliefs of anyone else here, but personally, I'm excited to partake in the ceremony, and it's been really interesting cooking all the food for the dinner. I have no idea how much of what we're doing is traditional as, again, I'm not Jewish, but the food all seems really tasty. I baked up three different Baklava, one with a more traditional honey glaze, one with a maple glaze, and a third with a grapefruit glaze (3,4). My mouth was watering as I stored them for tomorrow haha. Meanwhile, Dan worked on cutting vegetables, making hard-boiled eggs, and cooking up a dish called Gefilte Fish. The fish dish is served cold, but as part of making it, it produced a wonderful fish stock that we are considering making into Ramen (if it lasts that long).

Once Dinner was done, I decided to take a walk up the volcano. Only I did it barefoot haha. I'm trying to toughen up my feet since I'd like to walk around barefoot more. It was a great walk, but real slow going.

Nothing else notable really happened, overall a slow day despite the 3 hours of baking work haha.

I'll leave you all with this video I wanted to post yesterday, but since my laptop decided to update I couldn't. Enjoy a little 20 second reveal of the Love Shack everyone:
1-Cooking-Skillet-Hash.jpg 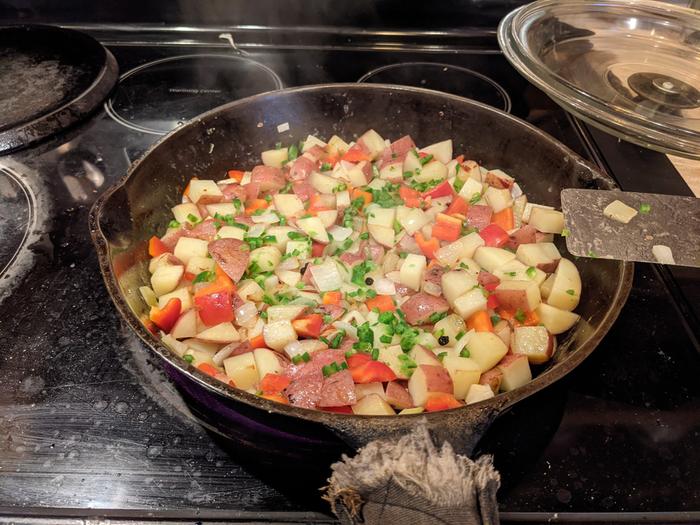 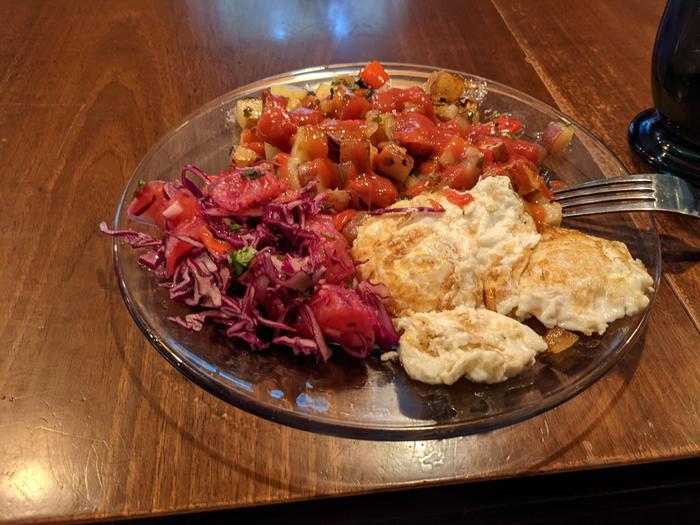 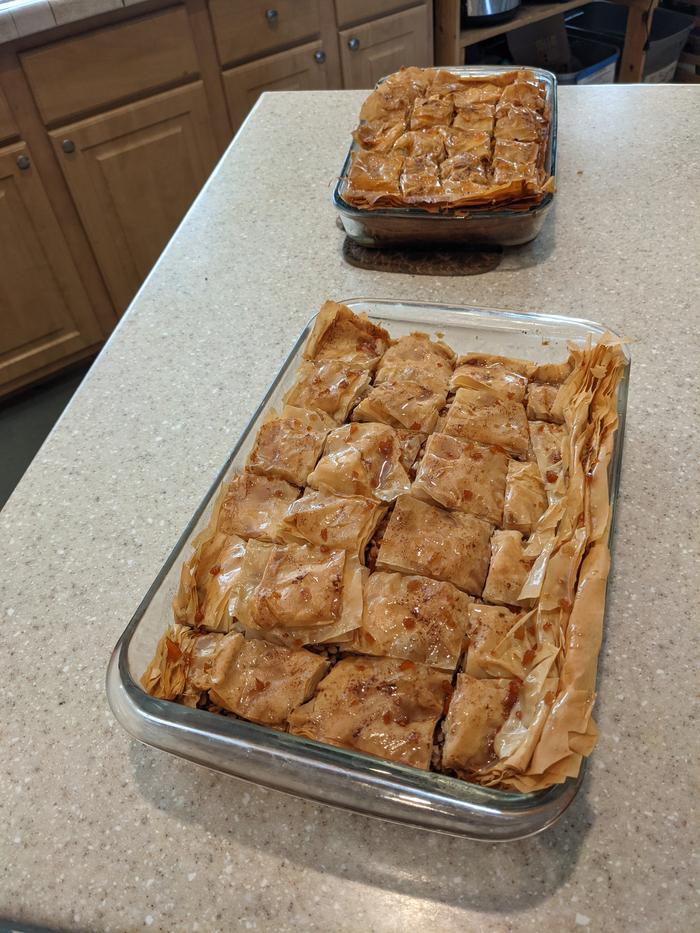 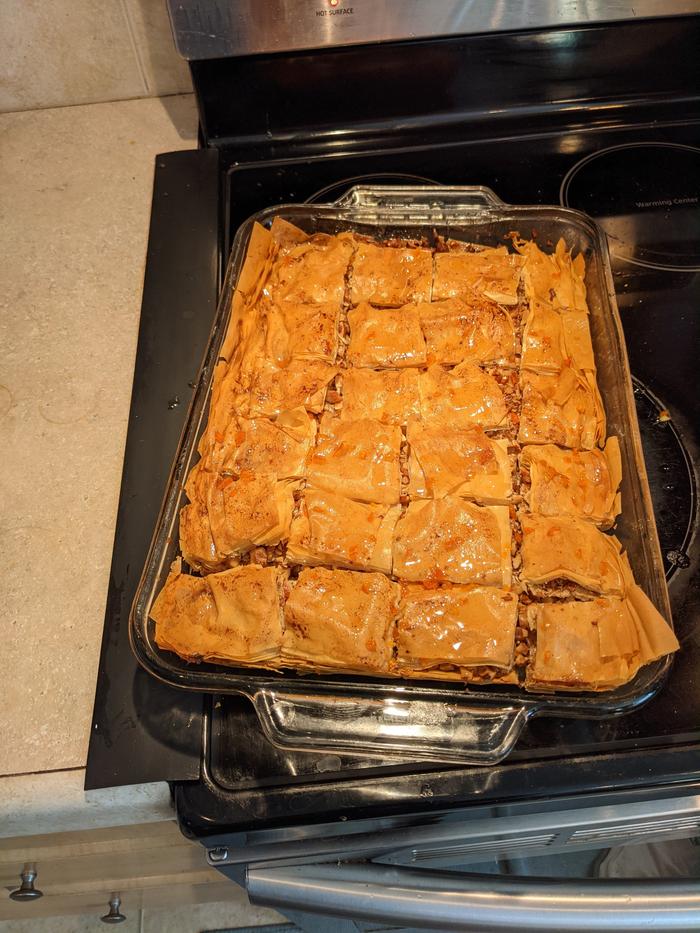