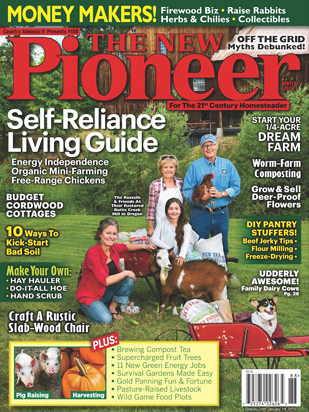 The New Pioneer Magazine was created in 2010 and comes out four times a year. It covers a wide range of self reliance and homesteading subjects: gardening, food preservation, hunting, alternative income streams, tools, survival, eco-building, energy independence and much more.

The magazine is available in print or digital subscriptions. Do not look for a website, they only have a Facebook page where they put scanned copies of some articles.

They are published by Harris Publications who publishes many other magazines such as the Farmer's Almanac, and Quilt Magazine.

posted 7 years ago
The part about "permaculture gardening" mentions me, and there is even a sidebar about me!

And there is an article about butchering pigs by the farmstead meatsmith guy. Lots of good pictures.

I was able to score a copy at Barnes and Noble today.

They sent me two copies about six weeks ago with a note saying something about how they like me, and they hope I like them! I browsed the two issues they sent and thought - yeah, this is good!

.... I just went through this issue that talks about me. I thought I would relay subscription price and phone number but I couldn't find anything in the magazine about subscribing. I guess you just have to buy it one copy at a time.

posted 7 years ago
I saw this in the checkout line of Tractor Supply the other day.

Fallon Wilson
Posts: 36
Location: Sable River, Nova Scotia Canada
2
posted 7 years ago
They should have it at Chapters if it's at Barnes&Nobles. Paul as for the commentators we wanna let ya know our household loves your sense of humour. It keeps the monotony at bay and keeps us ADD folks interested

posted 7 years ago
I think the is the first time I have seen a magazine that does not do subscriptions. They only wanna sell it on the shelves. And there is pretty much nothing on-line.

When I open any magazine, I fully expect that the good ones will have one article I am interested in. A really good one will have two or three. This one has

2) paddock shift stuff, including RABBITS as a colony style

3) a geothermal system for hundreds of dollars instead of thousands

6) cooking fireside (I never thought of that refective spit)

I think there are probably five to ten more that others will like but are not so interesting to me.

Torrie Birkemeier
Posts: 4
posted 7 years ago
I'm laughing this morning.....
I was going to write a post about a good permie mag for my bathroom reading material

and low and behold- mr wheaton is not only the duke he is also a mind reader because there was a link to this rad mag in my inbox along with the daily reader.

Rhoda Kendry
Posts: 15
Location: Ontario, Canada
posted 7 years ago
What a co-inky-dink just found this the other day at wally world. It was ok but I guess i expected... more? Maybe my opinion of it will improve with further issues. Good article on paul, nice picture. First time on the forums )))))waves((((( Hi all.
John Polk
steward

Posts: 7926
Location: Currently in Lake Stevens, WA. Home in Spokane
318
posted 7 years ago
Sounds like I will need to find a retailer in the Seattle area.

They must be trying to keep expenses down by eliminating the 'home office'.
Too bad - they're also keeping sales down.

posted 7 years ago
interesting, i'll have to keep an eye out for that, when im out and about:)

posted 7 years ago
If I understand well....
No way to get it from abroad!

Xisca Nicolas wrote:If I understand well....
No way to get it from abroad!

Xisca, On the order page, the drop-down boxes had options for country, so I think you would be able to get them.

posted 1 year ago
The most recent issue has a huge article about the permaculture playing cards!

And they sent me this and told me it was okay to share!

I hope they sell lots of issues this month because people want to encourage this sort of article!

Jim Fry
Posts: 307
Location: Stone Garden Farm Richfield Twp., Ohio
24
posted 1 year ago
Good magazine. I like it.
Especially because we were on of their featured farms
a summer or two ago.

Florian Hübner
Posts: 8
posted 1 year ago
Too bad they have no digital version, shipping doubles the price for me. :/
paul wheaton
steward

posted 8 months ago
The new issue has a glowing, full page review of my book!   Yay!   My understanding is that it is at newstands now!

Florian Hübner
Posts: 8
posted 8 months ago
They have a digital version now too!
paul wheaton
steward

posted 8 months ago
The issue with the lovely review of my book is the "spring 2020" issue.  With the dog on the cover.

posted 8 months ago
I just found it on kindle:  https://amzn.to/2v7qAk6