From the Cutting Room

Bart Glumineau
Posts: 193
27
posted 7 years ago
Hi all, even if this room at Wheaton Laboratories is a virtual one, I though it will interest you to get some news and special behind the scenes of what's cooking on my editing bench. And just so you know, excuse my french, but i'll try to be as visual as possible !

I'm just back from Voices where i had some lovely time with Jocelyn and Paul, and it was also time to shoot some extra footage for the soon to be released 3 dvd set on earthworks. Here is what is on my bench today We've got some finger ballet of an improvised crew And surprise surprise, we had some nice visit !

All for tonight, until next time ....

Paul seems to be missing a hat. (running ducking and hiding)
neil bertrando
Instructor
Posts: 111
Location: Reno, NV
15
2
posted 7 years ago
There must be something very interesting off in the distance;)

Charles Tarnard
Posts: 337
Location: PDX Zone 8b 1/6th acre
14
posted 7 years ago
If those three got a little closer together, their shadow could attack using the word NI!
Burra Maluca
Mother Tree

posted 7 years ago
Anyone know a good guild for a shrubbery? They look like they need one...

Bart Glumineau
Posts: 193
27
posted 7 years ago
Ok , here is an other view of Paul in action. The exact same moment capture by Christian ! Christian Kettner
Posts: 73
Location: North Carolina, near Raleigh
4
posted 7 years ago
First of all,I must say that I had way too much fun getting to hang out with the permies crew for a day and it is a memory I will always treasure!
I also enjoyed the fact that Paul likes having fun even when the camera is not rolling....I think he was REALLY enjoying the fuzzy microphone in this photo..(maybe a little too much..hehe :-b)..
20140317_101729.jpg 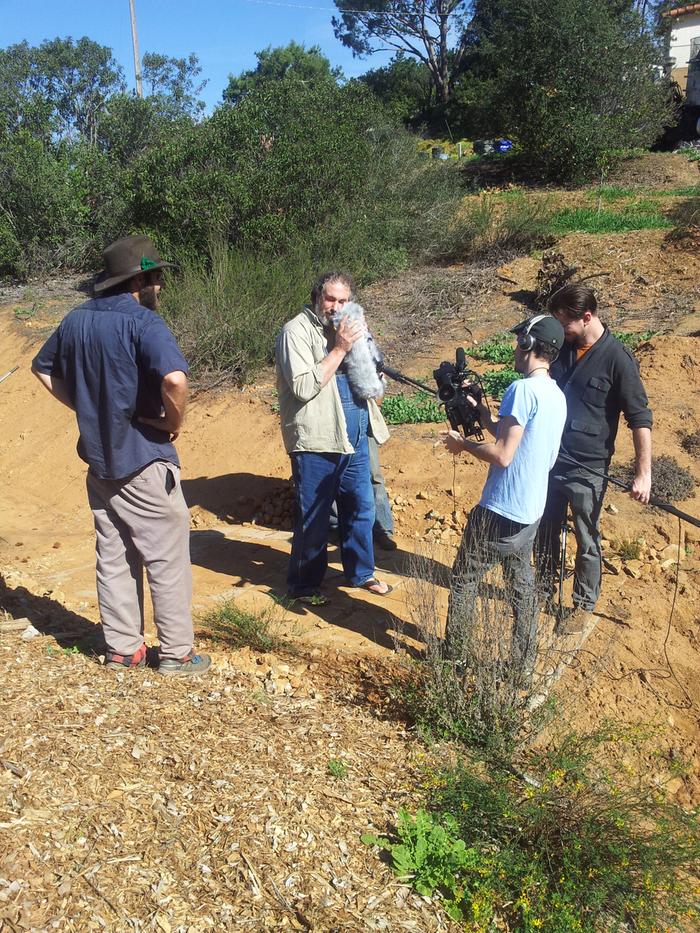 Christian Kettner
Posts: 73
Location: North Carolina, near Raleigh
4
posted 7 years ago
Kris cam time!!..This guy shows up with a drone...the amazing thing was that he built it himself...After chatting with him for a while I found out that he is really cool guy and knowledgeable about permaculture as well....the mid day winds were too dangerous for drone flying so Kris waited patiently all day for his chance to fly....here is a shot of kris the drone pilot getting ready for liftoff! 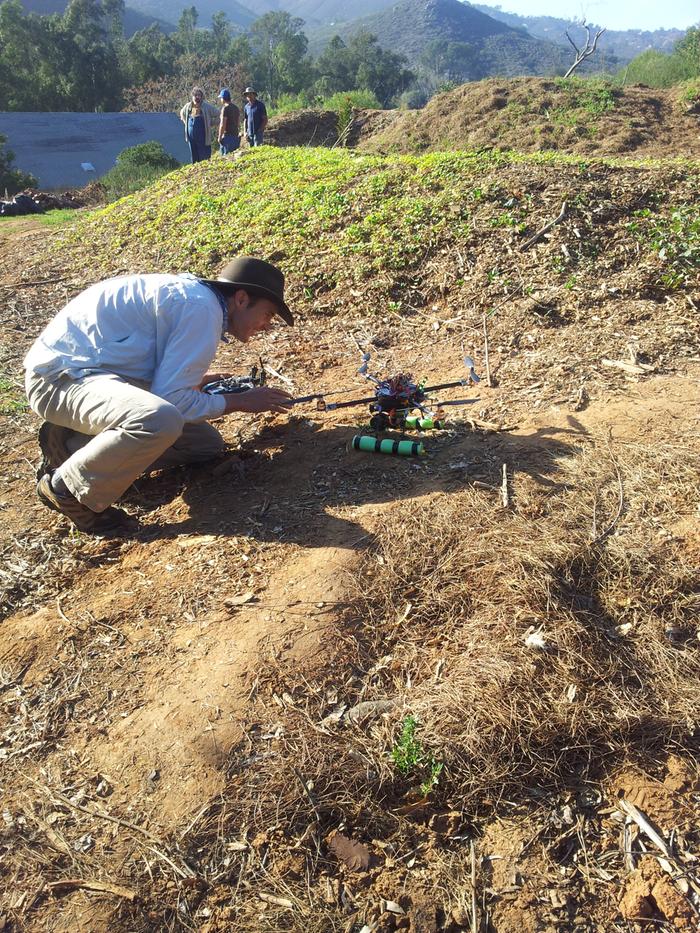 Bart Glumineau
Posts: 193
27
posted 7 years ago
Big thanks to Kris Cram, not Chris, who did an awesome job with us. His work with the quad will give some aerial footage to the world domination gardening 3 dvds ! Thanks again

And for the fun here is more of Paul messing with my microphones ! Christian Kettner
Posts: 73
Location: North Carolina, near Raleigh
4
posted 7 years ago
Sky Mountain Institute is in a valley that gets a nice dose of cool coastal winds funneling through from the nearby pacific ocean.Alden and his Lovely wife were so hospitable and had some delicious food waiting in a small house perched on the hillside...here is a view from the house...after lunch more awesome footage was taken inside with Paul,Geoff and Nadia(Chad working the Mic and Barth Running the camera).....Owen and Neil are observing patiently on the couch 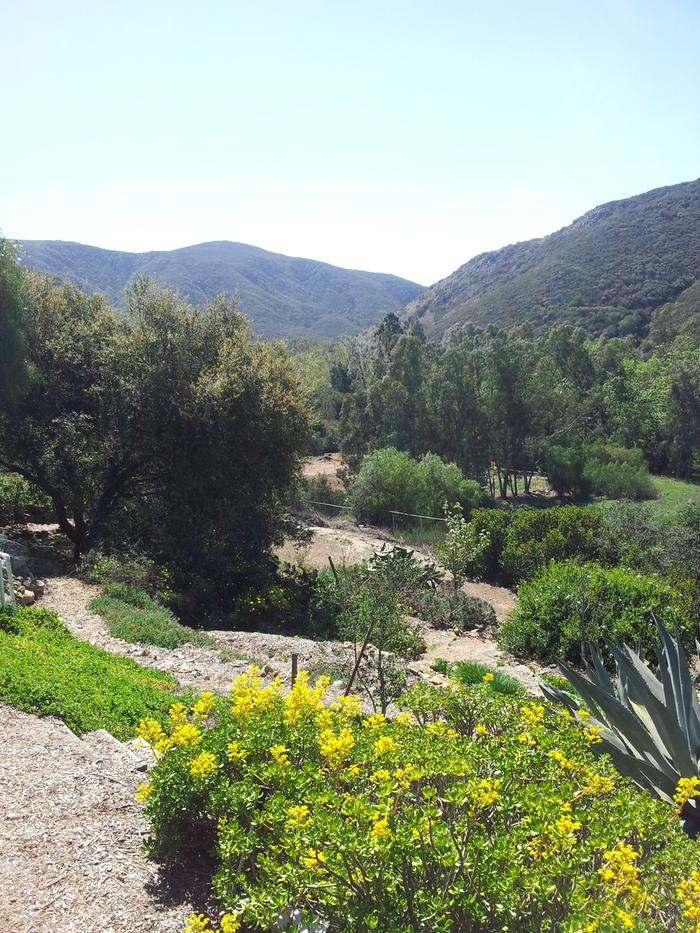 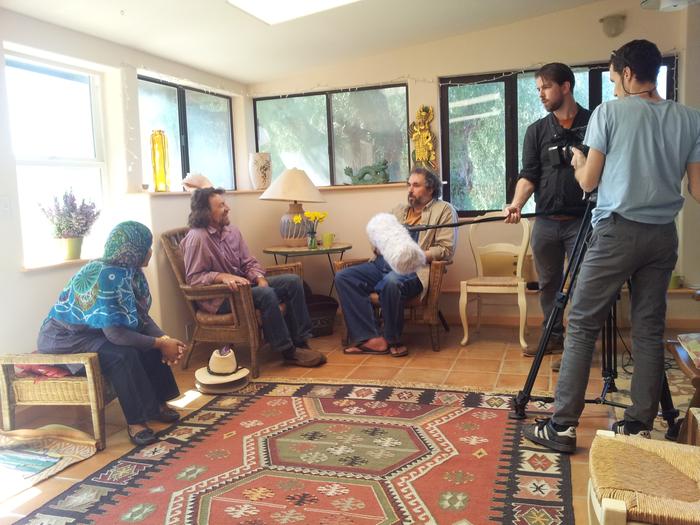 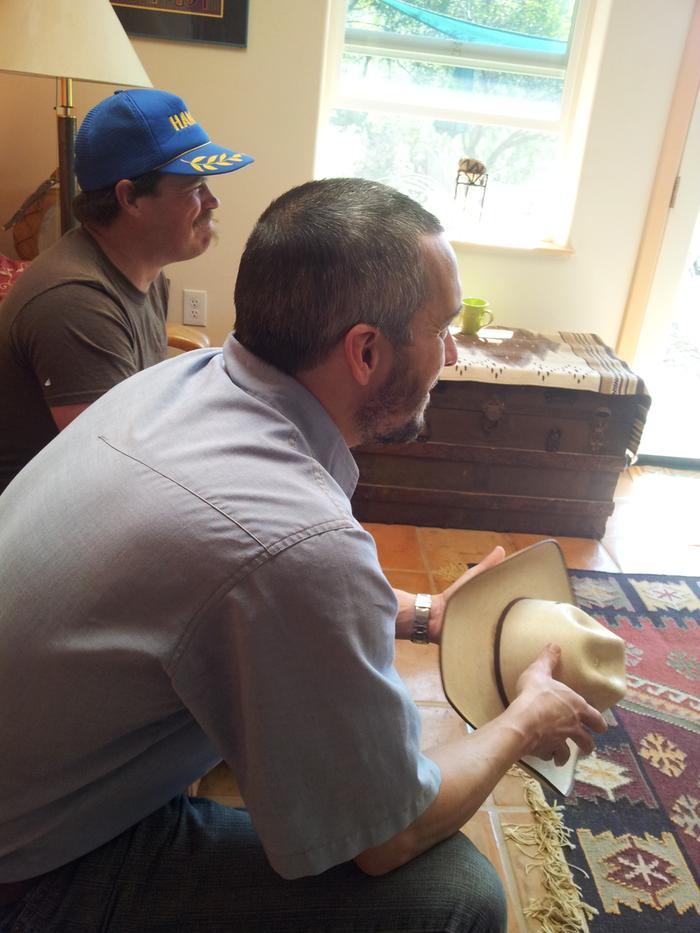 Christian Kettner
Posts: 73
Location: North Carolina, near Raleigh
4
posted 7 years ago
Lol Charles here is exclusive footage of the crew showing up for the filming that day,
It's amazIng how fast they got from Temecula to the earth work sIte usIng just coconuts! !sorry, couldn't help myself.
king-arthur.jpeg 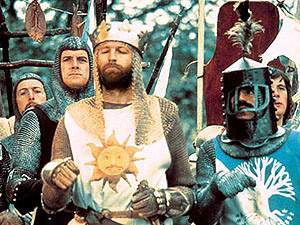 Christian Kettner
Posts: 73
Location: North Carolina, near Raleigh
4
posted 7 years ago
More random behind the scenes photos...one with my roadtrip and lake skinner buddy Derik in the foreground....
Second one showing Bart bending to get the best footage(Bart can bend like a pretzle if required)
Geoff talking plants in the third.
Bart and Chad are true professionals and were fun to watch...awesome 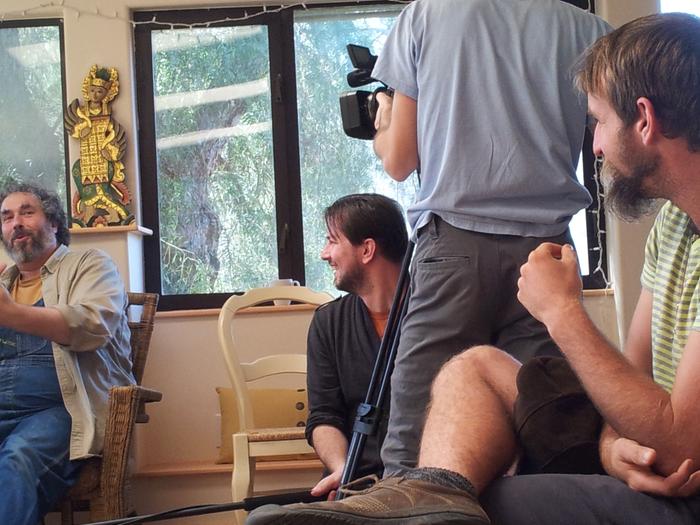 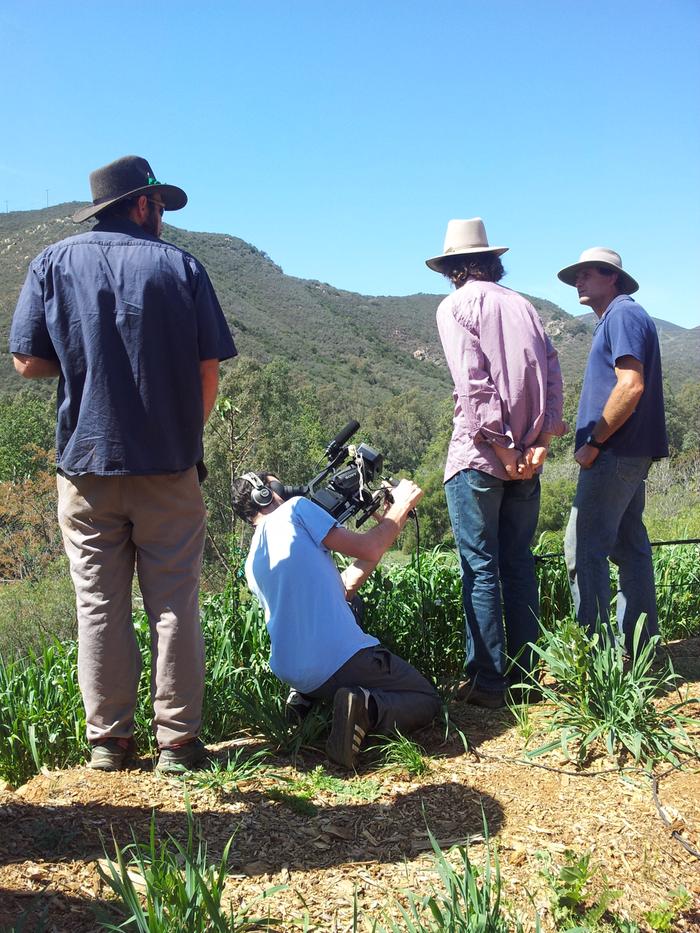 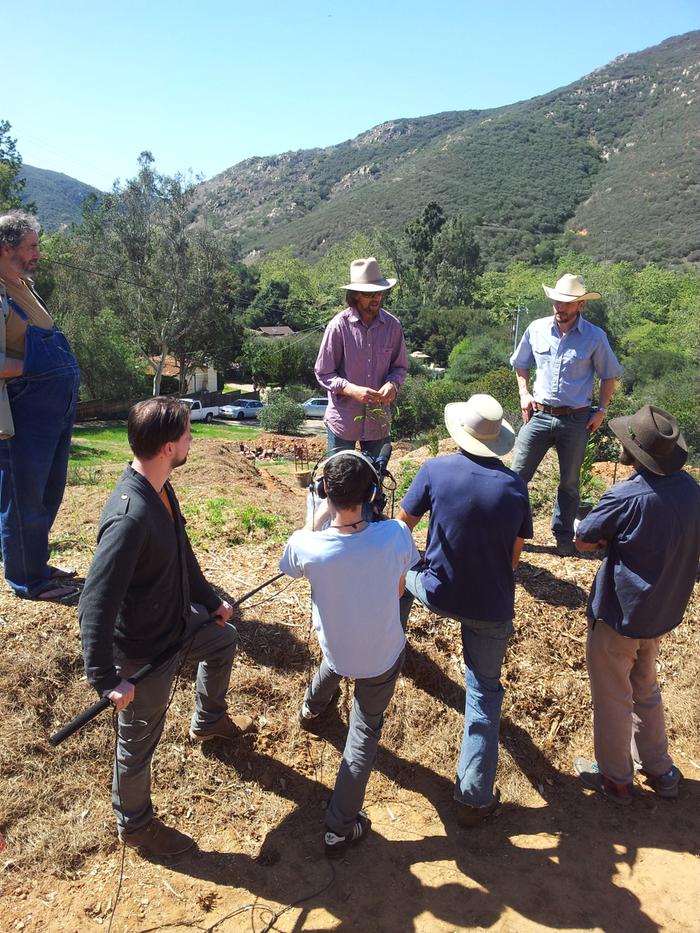 posted 7 years ago
Thanks for the pictures - can't wait to hear what Geoff had to say!

The Duke is trying to impress the Prince with some magic tricks ! These photos make it look so easy.

Filming Geoff Lawton is like trying to take a photo of a toddler, he's liable to turn his back to the camera at any time or suddenly start walking in any direction on a whim.

Then, trying to position the microphone somewhere in front of these guys (either from above or from below, without getting in the frame of the camera, and without casting a shadow on anyone, while chasing them around the property, on which I could be standing anywhere between 4 feet higher or lower than the guys chatting about the landscape) was no walk in the park, to say the least, but I think we all had a blast that day.

And Bart, so great to meet you and work with you, during and after the conference.

That does look like way too much fun. Glad to see the film 'crew' is growing. Hope they feed you guys good!

Kris Cram
Posts: 2
Location: Pine Valley, CA
5
posted 7 years ago
Looks great Bart, looking forward to see everything come together into a visual/educational masterpiece. Thank you again for the opportunity to come out and fly a little, crash and little, and above all get some great knowledge and insight from some great folks who love permaculture

We just had a new mini Paul made today. Check it out ! posted 7 years ago
I think I like the old mini-paul better - except for that odd hat.

posted 7 years ago
I like the new mini Paul!

Christian Kettner
Posts: 73
Location: North Carolina, near Raleigh
4
posted 7 years ago
HAHA..love it Bart ! a new mini Paul was born...."BLORP"....
And having his own 'mini me' will work in perfectly with the whole hollowed out volcano plan!!
((ducking&hiding)) 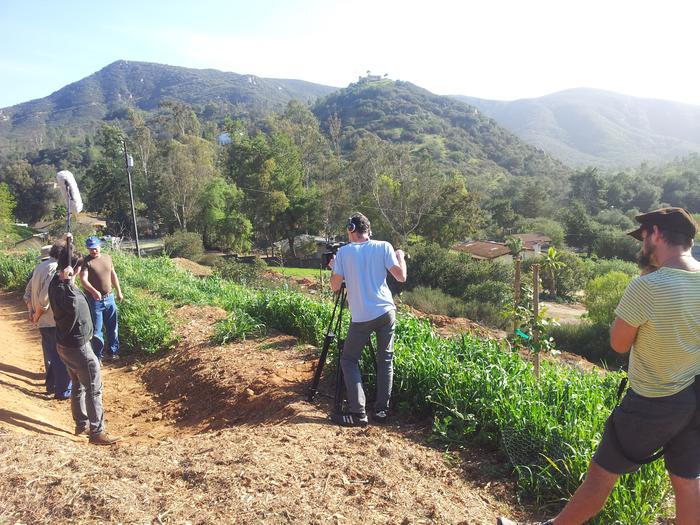 ..Neil Bertrando's car is in background and it is sad because the battery is kaput 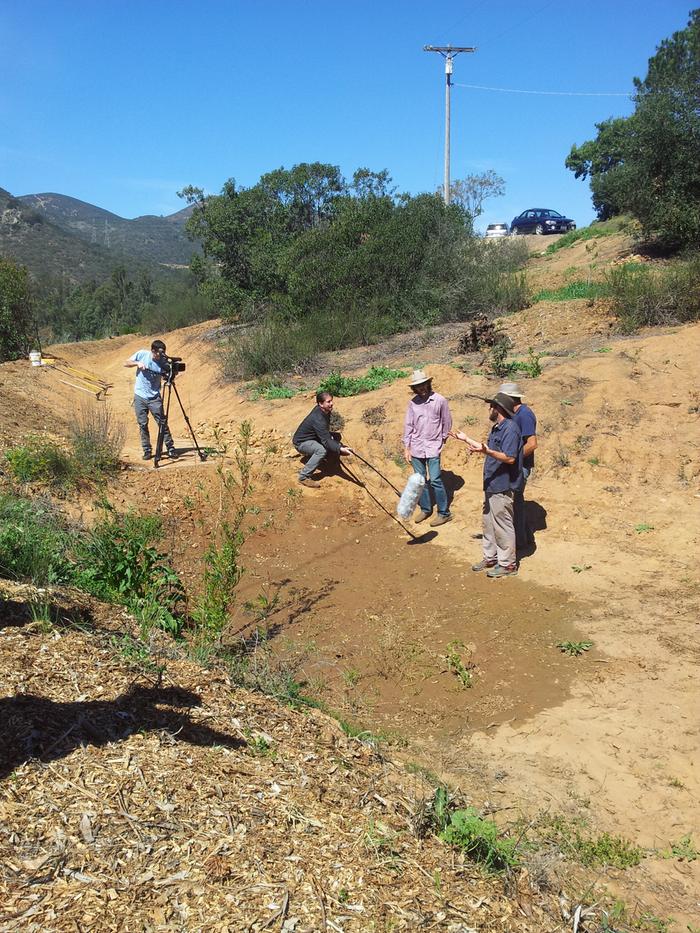 Christian Kettner
Posts: 73
Location: North Carolina, near Raleigh
4
posted 7 years ago
I want to thank Bart for inviting me to share my experience at sky mountain!
And also Paul and Jocelyn for welcoming a permies"newbie"to stay at the house with open arms...you guys are awesome.
I am almost out of my version of behind the scenes stuff...hope you don't mind me indulging in just one more story and a video.
It was inspiring watching the video making process at sky mountain, then I got this idea and had to try it,I wanted to make a video of the path that a drop of water would take from the road and through the entire earthworks, but all I had was my cellphone and the first attempt came out really shaky and my chubby shadow was getting in the way.
I remembered a horror film I saw years ago called The Evil Dead....the camera in this film represented the eyes of the monster as it float through the landscape and home in on its next victom. ..it was really cool and even cooler when I saw a behind the scenes film on how it was done and how it"low tech "it was.


So On my next attempt I taped my cellphone to the end of one of Alden's rakes to provide the mass needed to stabilize the camera and maybe create a floating effect.....
Well the results were definitely a huge improvement over the first try...but still...very amateur. ..lol and may make you a little seasick if you decide to watch....especially when I try to create a floating effect in the pond area...then I continue on pretending I am running Kris Cram's drone and get carried away lol
This is only half of the video.
It does show the earthworks in very good detail though...

Burra was able to imbed the video for me in the next post,
Enjoy the "EVIL GARDEN TOOL CAM" :-b

posted 7 years ago
I've embedded that video below.

Christian Kettner
Posts: 73
Location: North Carolina, near Raleigh
4
posted 7 years ago
Thanks Burra! ...wow it comes through really blurry after uploading to YouTube. ...oh well
Bart Glumineau
Posts: 193
27
posted 7 years ago
i ve been absent the past days, i was moving and unable to get access to internet. Tonight in the cutting room :

Some special guest featured in the upcoming DVDs Don't forget to go check out our Kickstarter campaign on Natural plaster. We are almost funded ! http://kck.st/1kX0Mrq

brad millar
Posts: 133
Location: Kooskia, ID
39
2
posted 7 years ago
Last Sunday I was able to go out and see the swale, pond and sun scoop hugel you guys put in. I'm looking forward to seeing the workshop video.

Bart Glumineau
Posts: 193
27
posted 7 years ago
Working on some cool animation for the DVD

posted 7 years ago
That is super cool, but the spinning thing made me dizzy! Maybe slow that down a little in the DVD. . .