Erin Newell
Posts: 35
Location: Vancouver, BC
posted 6 years ago
Just want to give a shout-out to non-violent communication, which works fabulously when I remember to use it. The thing I like best is that it makes me stop and listen to what the other person is actually saying, and check that I've heard them, not continually think about how I'm going to reply. I've seen NVC done very according-to-formula, and it works ok, but once you've got the idea and you can fly with it, it's really powerful.
Jeanine Gurley Jacildone
pollinator
Posts: 1459
Location: Midlands, South Carolina Zone 7b/8a
34
posted 6 years ago
I read a book recently that discusses more productive forms of communication. Wish I could remember the name but I can’t at the moment.

The author talked about how chairs or benches for problem solving meetings should never be set up in rows all facing the front. He said when all of the seats were arranged in a circle the incidence of violent or hurtful comments and responses dropped to almost none.

I suppose it has to do with having to look each person in the face as you are speaking that would change the comment or response.
Personally I do like the idea of having all community meetings in a circle such as this.

Posts: 3999
Location: Wellington, New Zealand. Temperate, coastal, sandy, windy,
103
posted 6 years ago
I'Ve been in face-to-face situations where the 'lingua franca' has been nvc.
I'm sure with practice it can feel ok

But the way I try to communicate on permies is basically a version of nvc-
it took a bit, but now I'm really comfortable putting forward my own experiences,
and feel a bit weird when someone says 'you' in a pointy-finger kind of way!

Judith Browning
Posts: 7635
Location: Ozarks zone 7 alluvial,black,deep clay/loam with few rocks, wonderful creek bottom!
1464
posted 6 years ago
we have this list on our 'peace wall'....I tried to find a link to a copy on line and in the end just took a picture of my copy....and I also think that the bounderies here at permies have taught me much. 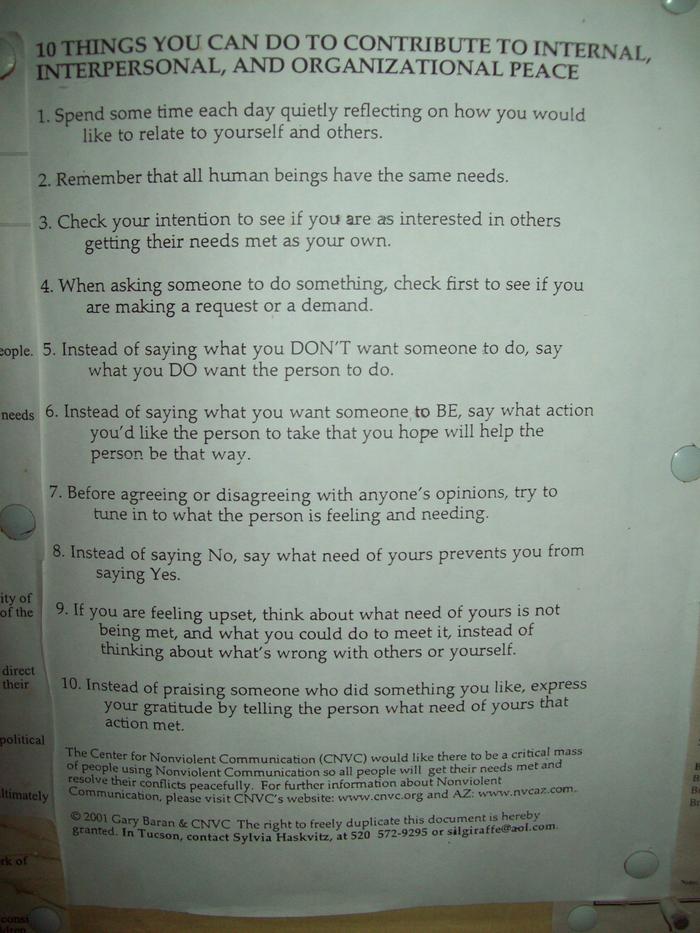 posted 6 years ago
Two ears and one mouth.

So you can listen twice as much as you speak.

Judith Browning
Posts: 7635
Location: Ozarks zone 7 alluvial,black,deep clay/loam with few rocks, wonderful creek bottom!
1464
posted 6 years ago
Is anyone familiar with the Listening Project ? Miles mention of 'two ears one mouth' made me remember it. I think it has been very effective with facilitating discussion among more diverse groups of folks.

Posts: 319
Location: Buffalo, NY
30
posted 6 years ago
I've been to some workshops for NVC, but haven't really used it. I've heard great things like when people start to use it regularly their friendships get better or they drop bad friends, relationships improve, etc.
Erik Little
Posts: 167
Location: USDA 5b - Central IL
5
posted 6 years ago
I read/heard somewhere when it comes to discussing something with your significant other to get face to face maybe even in an embrace to reduce the potential for elevated voices.

.. I recently stumbled upon a phrase that sets the basis for things pretty neatly.. "Be Nice"....

This sounds so simple in theory.....putting into practice is a real challenge I think

posted 4 years ago
There is some nasty reverse psychology out there under this title.
It uses words with opposite meanings and makes a mess of logic.

Be careful and make sure the whole thing makes sense.
Julia Winter
steward

posted 4 years ago
I am a beginner, but I can vouch for NVC's effectiveness.  It helped me deal with my neighbor in a more effective way.

I was in my back yard, a relatively large space (by Portland standards - it's a quarter acre) that I'm reclaiming from the Himalayan blackberries, perennial morning glory and sweet autumn clematis, all vining, super persistent and invasive plants in this climate.  I have a six foot chain link fence around most of my property's back yard, and my neighbor on the south side came up to me to talk about the vines growing on the fence (just a few at that point, I will point out).

He said, "What we need to do is hire some guys to dig this out completely on both sides, and then put down concrete, two feet of concrete on each side."  I was stunned.  Luckily, I was so stunned, I didn't respond right away.  I tried to remember some NVC advice. . .

So I said "What I hear you saying is that you would like a permanent solution to this problem, something that is once and done."

"Yes," he said.  And right there, at least we were still communicating!

I suggested that if we install and encourage plants that we like, we can overcome the invasive vines without resorting to concrete.  I pointed out the thornless raspberries and passionfruit vines I'd planted there, also the jostaberries and the hydrangeas back in the shady area by the western fence.  I commiserated that it is frustrating to have to remove the invasives over and over again, but I shared that it seems to me they are getting less vigorous with time.

And henceforth, I've tried to weed that southern fence, starting in the far back corner, first, when I have a little time to garden.

One PNW gardening tip: I've found I can throw the morning glory vines into the chicken pen and they will die and dry up there.  Once dry, they are a fine addition to my compost system.  I'm lucky enough to have a big double rotating barrel that an elderly neighbor sold to me for cheap, so I get good breakdown.

James Hoggan
Author
Posts: 13
Location: Vancouver, British Columbia
3
posted 4 years ago
Bryant Welch believes that nonviolent speech is effective because a lack of response from someone who is attacked undercuts " the projective devices that adversaries use to justify their aggression." If the victim remains silent, it is much harder for an aggressor to sustain an attack, because "the perpetrator is left to stew in his or her own ugly juices. They are slowed in their attempt at self justification,"
Susan Quinlan
Posts: 20
posted 4 years ago
I spent one year in a weekly  NVC  practice group.  Hardest thing I have ever engaged in.

What do I need? Trick question?

Enough time in the space to discover how I REALLY feel?

I dont even have to be mad at the bad guy when I realize how scared or hurt I am.

Not passing judgement? Now what do I do to make choices? This was my go to coping skill.

We had a hard time getting people to return to the meetings and it did sadly end.

Thanks for reminding me today to reflect.