posted 6 years ago
So I know paul isn't big on grafting, I am not huge on it myself but I thought I would share this idea.

What if we could put just one of these where sheeple could see regularly. Not only do they see an amazingly beautiful tree in spring, they get to see you harvesting from it all year. I have always thought grafted trees never looked as nice as natural ones, but maybe the problem is the solution?
John Elliott
pollinator
Posts: 2392
88
posted 6 years ago
You've got me inspired!

I was just wondering what to do with 4 absolutely disappointing plum trees that I got swindled sold by a mail order company. Worthless little fruits the size of a pokeberry. But now I know what I am doing this winter: since the root stock is well established, I am going to cut them back and start grafting on fruits on that I do want!
Kate Muller
pollinator
Posts: 291
Location: New Hampshire
85
I like...

Shawn Harper wrote:So I know paul isn't big on grafting, I am not huge on it myself but I thought I would share this idea.

What if we could put just one of these where sheeple could see regularly. Not only do they see an amazingly beautiful tree in spring, they get to see you harvesting from it all year. I have always thought grafted trees never looked as nice as natural ones, but maybe the problem is the solution?

I do think it is a beautiful form of art. I love to see people make growing food and gardening beautiful.
This is going around my social circles and I now have more friends interested in fruit trees, grafting, and growing more of their own food.
Burra Maluca
Mother Tree

posted 6 years ago
I have to admit, it is rather beautiful... 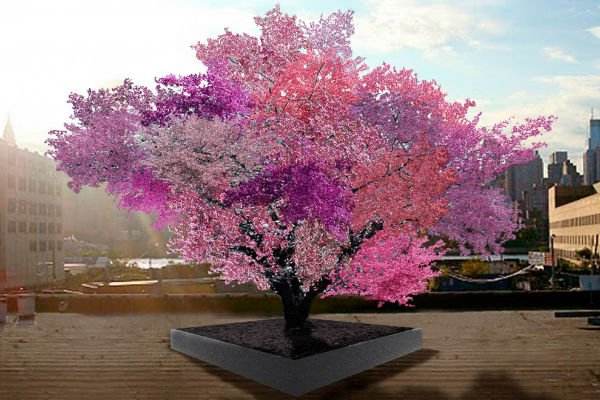 posted 6 years ago
Thanks for posting the picture Burra, I am not good with message board stuff.
james Apodaca
Posts: 57
2
posted 6 years ago
I've seen this post a lot lately. Every picture I've seen looks like its computer generated.

Either way, if its a real tree, cool.

I've seen 2y/o grafted citrus here in Florida with 6 different varieties on it selling for $300+. Seems pretty lucrative if you have multiple known varieties and know your clientele.


I can only assume that picture is fake, given how unnatural it looks. It looks like something someone cobbled together with photoshop for lack of any other illustration for the article. It would be nice to see a real picture, and get some specific details of his grafting process.

I think it's quite common in places to graft multiple varieties of citrus onto one tree, to save space. I saw one older greek gentleman in Australia, who had grafted four or five onto his via bud grafting. Including finger limes, grapefruit and some other stuff. His approach was rather straightforward. He bound the bud into place with strips of the bark from one of the branches. Once my grapefruit is large enough, I'm going to chuck a mandarin and a lemonade onto it.

Alder Burns
pollinator
Posts: 1606
Location: northern California
218
posted 6 years ago
My partner and I looked at the stuff behind this article and discovered that not only is the photo computer-generated, but there are only a few trees in the initial stages of the grafting actually in existence. I think it would be extremely difficult, if not impossible, to bring this many varieties into production on a single rootstock. The commonly offered 3 and 4-way grafted trees always fail in my experience. Inevitably one of the scions proves more vigorous than the others and dominates within a couple of years at most. It would take continuous judicious pruning to keep the most vigorous scions restrained enough to give the others a chance......
Dave Lodge
Posts: 93
Location: New England
3
posted 6 years ago
This happens a lot, and members of the Rose family can be grafted pretty easily. The image is Photoshopped though. Attached some photos from his website.


Once the working tree was about two years old, Van Aken used a technique called chip grafting to add more varieties on as separate branches. This technique involves taking a sliver off a fruit tree that includes the bud, and inserting that into an incision in the working tree. It's then taped into place, and left to sit and heal over winter. If all goes well, the branch will be pruned back to encourage it to grow as a normal branch on the working tree. 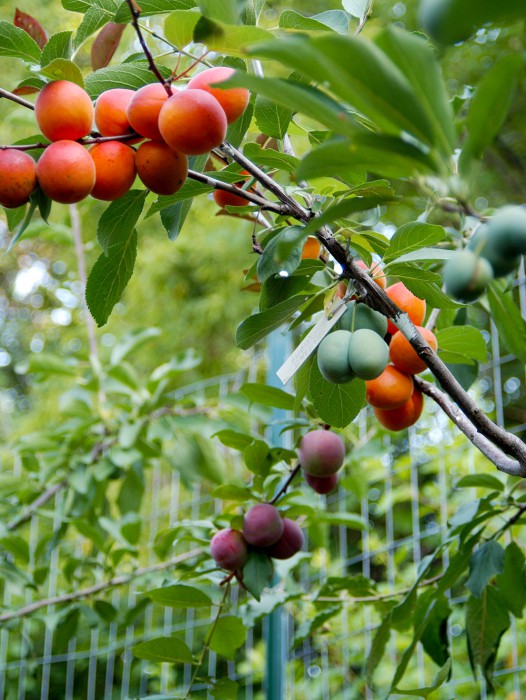 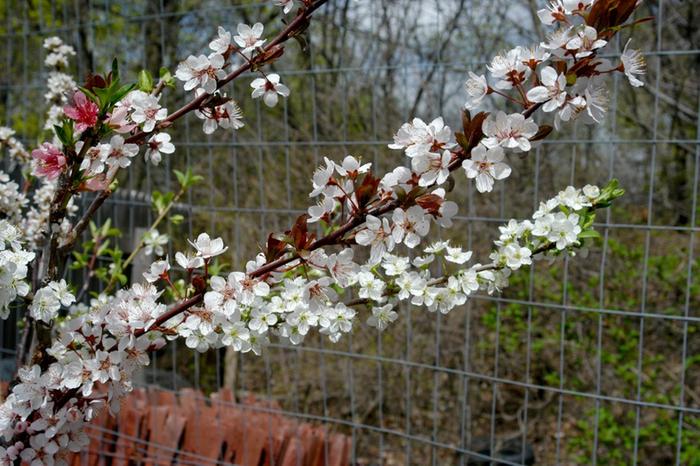 "You mustn't be afraid to dream a little bigger..."

Matt Reed
Posts: 11
posted 6 years ago
Turkeysong blog has a Franken apple tree he claimed had 140 unique apple varieties before it became diseased.

https://turkeysong.wordpress.com/2010/03/16/113/#more-113
Steven Edholm
Posts: 19
Location: norcal
7
posted 6 years ago
Yes, that's correct, my original frankentree has about 140 varieties on it. The virus has not proved to be much of a problem, just affects the leaves of some varieties and none severely so far. I also have multiple apple trees with many different varieties on them and am always adding and removing. I have thought about doing some art with grafting, like bark textures for instance. There can be issues for sure. One is suckering which can be exacerbated by interstems for instance. There can also be issues with vigor. Vigorous varieties like Katherine Etter (awesome apple) tend to overgrow, while weak some very weak ones will get crowded out. An issue with the tree of thing pictured on this thread would be getting varieties that all flower concurrently. In general though, I've had very few problems with multigrafted trees and lots of benefits. I'm so stoked about the idea that I did a follow up article encouraging people to dive in and go for it and would pretty much like to start a movement. The benefits are many and I think most small scale homeowners and homesteaders, would be better served by either multiple restricted form trees, or larger multigrafted trees. Pollination is better, you get more variety, longer season and it's just neat. I don't know much about nursery trees that are multigrafted, presumably by budding, but I've had great success with frameworking trees once they are established a little. Once a person knows how to graft, a lot of things can be fixed if they don't work out. Most of my experience is with apples, but I have a frankenplum and a frankenpeach that I'm slowly working on.

Grafting as art. There are so many things I would like to try to do in this realm. I think people are way too conservative in grafting. We are afraid the grafts won't take, so we follow whatever we are told or what has worked before. I've done a heart shaped tree in which the sap flow had to reverse at the top of the heart before going into the scion. It's doing very well in it's probably 4th year? I also did one tree where I stacked 6 consecutive grafts one on top of the other, staked it firmly and bound it to a bamboo to keep it stable. Every graft took. Each stick was a different variety, my attempt to make a tree that was a different variety for each scaffold branch, grafted in one year. But, some failed to thrive, while others grew out vigorously. I concluded that the varieties would probably have to selected carefully for equal vigor and never grew that tree out to see what would happen. I mostly wanted to see if I could get that many grafts to take. I've also made very long grafts, at least 3 feet long. Last year, I grafted about I think it was 70ish seedling apples onto dwarfing stock as part of my red fleshed apple breeding project. I left all of the scions full length, some up to 2 feet long, with 100% take. I'm not bragging (okay, not much:) my point is that I think we can really push the boundaries more than we might think, and we should start testing the limits

For long scions, paint the entire scion with a sealant. I usually use Doc Farwell's grafting wax.

Stabilize grafts, tight wrappings and support as needed. If long or prone to movement for any reason, binding to a form or stake can really help. Think of it like splinting a broken bone.

Be able to sharpen a knife and keep it sharp

Disbud at least some of the buds you don't need to direct energy where you want it, but leave enough for the tree to photosynthesize adequately.

With those ideas, I think we can go far in terms of grafting forms. As far as a tree like that picture, that would be really easy, except for varietal selection. I would grow basically a crap ton of plums in a row and watch them closely for years before deciding which to use for matched vigor and blooming dates. Length of bloom time and density would probably also be important. A big investment, but seriously cool! It would probably require maintenance, but so what.

The path to knowledge is paved with blasphemies
Bryant RedHawk
gardener

posted 6 years ago
I'm with Steven on this subject. I've bud grafted many trees when working at a nursery. The important things are, the stocks need to be related at least at the genus level for a good graft, the new slip must match to the cut and the binding must be tight. I would not add more than 4 grafts per year to a host tree, just so they have the best chance possible. I also would want the host tree to already be producing before I started adding the new species.