Superworms for bioremediation of polystyrene: ideas for extending the (re)processing?

posted 3 years ago
Thank you!

posted 3 years ago
Caught a glimpse of a beetle in the bin. Pretty sure it was a darkling beetle and not a local invader. If so, evidence that they are at least healthy enough to pupate and morph into beetles on a diet of mostly styrofoam.

posted 3 years ago
I got some normal mealworms about a week ago. They don’t seem to be interested in eating the plastic grocery bag I gave them, or the styrofoam takeout container. Maybe they are just so small compared to the superworms that their depredations are not apparent yet. I thought about trying to put them all in the same bin, but I feel like the superworms might just eat the mealworms. Some of the mealworms did crawl over into the corner of their bin and pupate already, so I feel like they may be more easily self-perpetuating than the superworms. But in my opinion they are not as cool. I really want to get some worms to eat polyethylene, but so far no dice.
B4A251C0-AEB3-496B-9C57-F149B01401B5.jpeg

posted 3 years ago
The Red Wigglers I put in the bin died.  Going to try BSF next.

Kimberley Whyte
Posts: 2
Location: Missouri Ozarks Zone 6B
I like...

posted 3 years ago
I am beyond excited about this! I have bred these guys before as snacks for my chickens but had no idea that they could help in my recycling efforts. I had great success using oatmeal as a substrate. They will eat their eggs as well as their pupa so I sifted the substrate regularly to separate them out. Your numbers will increase faster this way. I got my first batch of these worms  at shop that sells Live Bait. Very cheap. Thank you Jennifer for sharing this!
Tyler Ludens
pollinator
Posts: 11844
Location: Central Texas USA Latitude 30 Zone 8
1186
I like...

posted 3 years ago
So far the BSF larvae are doing great, cleaning up the dead Superworms and Red Wigglers.  I don't expect them to eat any of the remaining polystyrene, but I hope they will turn the rest of the bin contents into a uniform soil-like material which I can send off to the lab.

posted 3 years ago
Opened the superworm bin today and found several adult darkling beetles. Counted five before they hid in the bedding. So the larvae fed styrofoam are certainly capable of pupating and reaching adulthood. Actually, many people say that superworms will not do this if kept in a bin with lots of other superworms; I suspect that the ability to tunnel into the bigger chunks of styrofoam and isolate themselves is allowing them to pupate successfully. So depending on whether or not you want them to do that, you can decide whether you want big chunks of styrofoam into which they can tunnel. Personally I would like a self-sustaining population without having to pick out individual worms to let them pupate in other containers, and consider it encouraging that they are healthy enough to reach adulthood while chowing doen on styrofoam, so we will see how it goes. 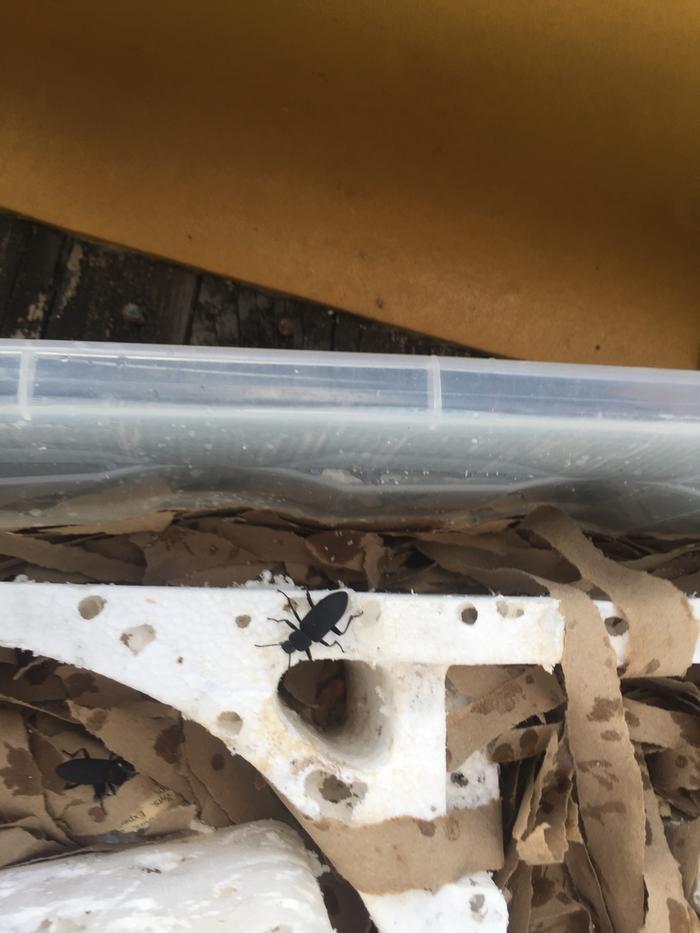 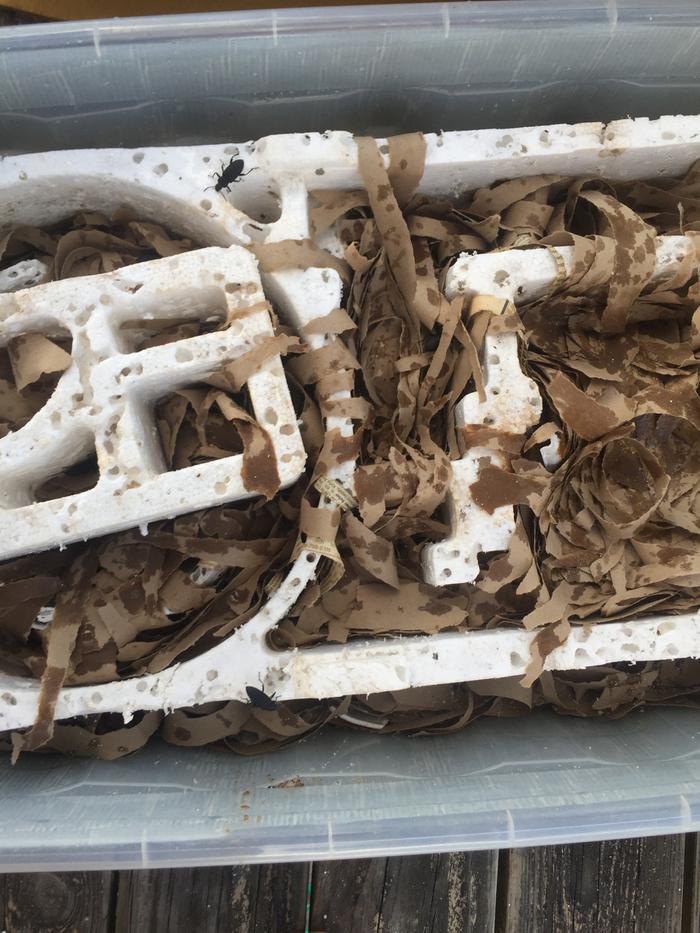 Really interesting post.  I am thinking you have a very cutting edge topic here.  It would be so interesting if you did a lab test for microplastics at each stage. The University of Reading recently did a study to remediate heavy metals with earthworms and found that the organisms over a number of generation altered their physiology to deal with it (pp.153 in 'Compost Teas'). I think what you are suggesting is viable, but the evidence must follow.

Matthew Nistico
pollinator
Posts: 632
Location: Clemson, SC ("new" Zone 8a)
119
7
posted 3 years ago
I am so glad that you are doing these experiments, and eagerly look forward to reading your results!  I am particularly interested in the test results, if indeed you can get a lab to determine just how broken down the polystyrene becomes after passing through a mealworm or superworm's gut.  But I am wondering: are you planning to test the worms themselves, or just the "soil" they produce in their bin?  I feel that both would be interesting to know.

If the worms themselves showed little contamination, then the possibilities of using them for livestock feed would be very exciting. If, on the other hand, they still contained microplastic particles, not so much.  Whereas if their poop was shown to be free of residual plastic pieces, that opens up different but still interesting possibilities.

Devin Lavign
pollinator
Posts: 1063
Location: Pac Northwest, east of the Cascades
315
I like...

posted 3 years ago
Jennifer showed some of us her beetles at the 2019 PDC at Wheaton labs, sadly the temps of Montana were not kind to the little buddies.

I am sure she will be giving an update when she has time. We sure didn't have much during the PDC.

But her experiment has gotten me interested in these little helpers.

posted 3 years ago
Hello all! Thank you for your interest! Unfortunately the nightly temperatures in Montana were too cold for the superworms even in summer, and they all died. I still have the partially processed waste, and may send some of that off for testing if I get organized, but for now the experiment is on hold.

Jennifer Richardson wrote:Hello all! Thank you for your interest! Unfortunately the nightly temperatures in Montana were too cold for the superworms even in summer, and they all died. I still have the partially processed waste, and may send some of that off for testing if I get organized, but for now the experiment is on hold.

posted 3 years ago
I think it would definitely be worth it to have the residue tested.

(Unless the lab cost is stupidly expensive)

posted 3 years ago
Still trying to track down a lab who will test for styrene in compost.  ALS Houston said they don't do it but will try to find someone who does.  Said such a test should cost $150-200. (yikes)

Mary Armenta
Posts: 1
posted 2 years ago
Hello!  Any news on your experiments?  This thread is extremely interesting and I just wanted to see if there’s an update.
John C Daley
pollinator
Posts: 3889
Location: Bendigo , Australia
340
I like...

C. West
Posts: 118
13
posted 2 years ago
i would fill a pot mixed with their frass (poop) and dead and mix it with soil and red wigglers then use that soil to grow dandelion or other easy greens, then feed those greens back to the superworms. with enough cycling perhaps the styrene will be taken in by the plants and processed a second time by the meal or super worms.

posted 2 years ago
If/When you begin this experiment again I would highly reccomend both oatmeal and wood shavings for your Superworms. We breed them at the pet shop where I work and use wood shavings for bedding, and oatmeal for daily feed. A couple times a week we take whatever veggies have gotten too old for our other critters and dump them in with the superworms. They seem to like starchy things the best, but will also eat the other veggie remains.

We raise mealworms in cornmeal! It is easy to sift through and pull out the worms and beetles to move them around (they're in a large plastic set of drawers, with different levels for different life stages). They eat apples and potatoes, and will also lay their eggs in the fruit/veg bits. They are quite prolific breeders, much faster than the Superworms.

James Iannessa
Posts: 1
posted 2 years ago
I know this is old brotha so I hope this gets to you and whoever else trades this, but you can feed the worms reminents to rolly polies / pill bugs and use their poop for the compost the e combination of the two render the plastic back to nature
Morgwino Stur
Posts: 70
Location: Southwestern Ohio
15
posted 2 years ago
I don't know if anyone is still interested in this, but I'm actually doing to be undergoing a similar project here soon! I've read several papers that mention using mealworms to degrade polystyrene, with notes that over 50% was completely destroyed, the remaining 50% is passed through, more or less, with a minimal amount of carbon from the plastic actually being retained. I found references that the mealworms can be used for other plastics as well, so my idea is to try and quantify how much the worms can eat, as a percentage of their body weight, possibly throughout their growth process, as well as see if they can do their entire life cycle on only plastic.

Superworms grow much bigger, but i remember reading that they actually are less efficient at it, though if mealworms can't do a full generation (beetle to beetle) on plastic, the superworms might be a better option just by virtue of lasting ~2 years as worms instead of mealworms constant pupating. The article I link below says that beetles were produced, but they didn't see if they were reproductive, and I had found others that said they had none survive till pupation. Some places say you need to acclimate worms on a rice diet first, then introduce to plastic. If my initial test doesn't work, I'll try inserting this step in before doing any significant changes.

The citations for it can lead you down an interesting path. One thing to note specifically is the mealworms themselves only physically break up the plastic, it's the microbes in their gut that actually process it, something proven by smearing mealworm guts over a petri dish and measuring the micro-divots the microbes ate. but the microbes by themselves are nowhere near as efficient as mealworms, likely due to the chewing up of material.

To test for microplastics in their waste, (of course i can't find mmy saved link here...) I'm going to use a simple set up of pvs with valves that works basically by making the plastics float. for heavier plastics, I'll have to use ZnCl I think, but for most just saturated saltwater should work. for this I'm not going to be too fusseed about following exact scientific handling, since for the most part it's going to be a yes or no. if yes, I'm going to use filters to try and catch enough fo the microplastics to get a sample size big enough to see if specific plastic eating microbes can handle it from there.

Ideally, I want to find out if using mealworms to eat plastic would result in safe to use frass, mealworm meal and happen with a minimum of input.

Sorry this is all sorts of rambly but as soon as weather in my area gets below 80F consistently, I'm going to order some mealworms to kick the testing off =)

Katherine Buchanan
Posts: 1
posted 1 year ago
Any updates on your experiment?