Restoring a historic watermill in the Italian Alps and putting it back into action. Help welcome!

Jeremy Baker
pollinator
Posts: 489
Location: Nomadic
40
posted 2 years ago
Yes, I spoke with a hydro designer today and he explained his personal micro hydro system is somewhere around 70% efficient but that it takes a LOT of tweaking the system to get such performance numbers. It took years to get it up to that level of performance.
Id be happy with any hydro then I’d want to start tweaking it to get it better. Speaking of which I’m going to tilt my solar panels now.
Ciao
tel jetson
steward

Posts: 3685
Location: woodland, washington
177
posted 2 years ago
is the wall that the river flows over man-made? is it a dam? what's above it?

Can you tell me the length of the span?
A 4inch steel pipe can self-support a span of 27ft, and a 12inch one can do 44ft.
http://www.piping-designer.com/index.php/datasheets/piping-layout-information/1669-allowable-pipe-span
I wonder what the cost is?

I wonder what the permit process is like to get a approval for taking water from the stream, and then secondarily what the electrical permit is like to install solar/wind/hydro.

tel jetson wrote:is the wall that the river flows over man-made? is it a dam? what's above it?

The wall is man-made. Just a concrete wall. It’s no dam, just intended to reinforce the original natural rock wall where the water used to fall from. You can still see part of the natural rock face that they didn’t reinforce. Above the wall is just a relatively flat plain where the creek runs a bit wider over. The only photo I have of this so far is the one attached. Hard to see though with all the foliage!
772FEA68-6C6F-4637-87B0-FF860B5B7E71.jpeg 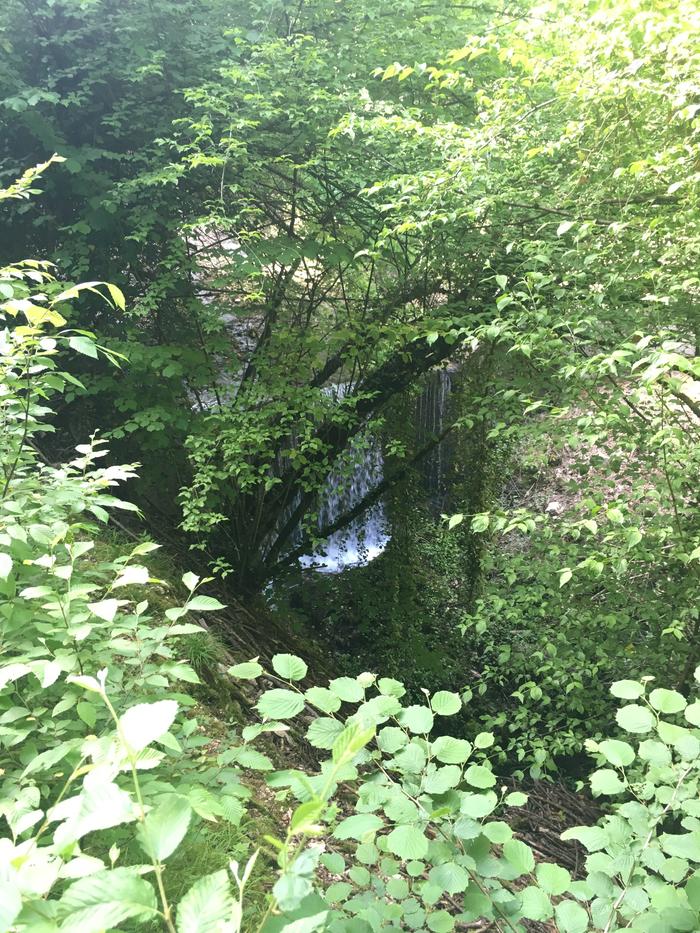 Can you tell me the length of the span?
A 4inch steel pipe can self-support a span of 27ft, and a 12inch one can do 44ft.
http://www.piping-designer.com/index.php/datasheets/piping-layout-information/1669-allowable-pipe-span
I wonder what the cost is?

I wonder what the permit process is like to get a approval for taking water from the stream, and then secondarily what the electrical permit is like to install solar/wind/hydro.

I’m not exactly sure as I didn’t take those measurements but if I had to guess I’d think around 45 feet from the waterfall directly to the top part of the property. If we could however get permission to divert the water over the original aquaduct, then we’d only have to span about 10 to 16 feet. Using steel pipes that can self-support sounds like a good idea, and would greatly reduce the need for scaffolding. 👍
bruno motta
Posts: 10
Location: lugano svizzera
1
posted 2 years ago
complimenti    per la  tua   intenzione di ripristinare      oggetti della storia passata,

posted 2 years ago
-- English translation below --

Hi Bruno, thanks so much for your reply! I will translate my reply in English as well for the other readers who don't understand Italian.

Where in Italy do you live? You are the first Italian I can speak with about hydropower, and I am very curious to hear if you have any experience with creating hydropower yourself. I am currently trying to look into what permits one would need to be able to divert a part of a river running on our land to our wheel so we  can use it to produce energy. Do you know anything about this? I'm a new resident in Italy and I don't know which authoroties I need to contact to get this done.

Also: what kind of generator are you talking about. Do you know places in Italy where one could buy such a generator?
Thanks so much!

Hello
I write you this email for info:
I am a retiree who has done so much for solar and water generators
https://www.youtube.com/watch?v=w16StyKLkvA&t=197s you can see a video of a brushless generator complete with elc for three-phase 230 volt 2.5 Kw at 600 rpm

if you are interested i am in switzerland (lugano)

I would be interested in your help. I don’t have much technical knowledge myself (although I’m trying to learn as much as I can).
Do you install these hydro-installations yourself as well, or do you mainly help with the planning/ calculating?
Do you ever visit the Belluno regio in Italy? It would be great to get your advice on planning our site.
Also: do you know good places to buy generators/ turbines in Europe/ Italy?

Thanks so much!
Jeremy Baker
pollinator
Posts: 489
Location: Nomadic
40
posted 2 years ago
How’s it progressing? Have you gleaned any more information from the locals about doing micro hydro? Is there another micro hydro system nearby you can visit?
S. Bard
pollinator
Posts: 278
Location: Italian Alps, Zone 8
133
I like...

We are currently playing the waiting game while our contractor is getting in touch with someone he knows who could be of help. Also discussing the possibilities of the waterwheel to do some small scale hydropower with Bruno. He might also know someone from the region who can help, so I hope to be able to get in touch with that person soon.

I’m sorry if this all doesn’t sound terribly exciting right now. We’ve been swamped with work and the project for the house, so the hydropower research is sizzling a bit on the slow burner right now.

posted 2 years ago
Just dropping my own comment here so I don't lose track of the thread.

I have absolutely nothing to offer on the subject; but I have much appreciation for your photos.

Ruth Meyers wrote:Just dropping my own comment here so I don't lose track of the thread.

I have absolutely nothing to offer on the subject; but I have much appreciation for your photos.

Thank you Bruno! What lovely photos.
Unfortunately I haven’t been able to take the measurements of the diameter of the wheel to give them to you. Because of the coronavirus lockdown in Italy I am no longer allowed to visit the property until at least the 3of April, but more likely it will be the 30th of April

posted 2 years ago
Oh My Yes!  Those were great  pictures!   Thank You Bruno!
S ; I'm glad you found a local expert , who may be able to help you develop your water wheel.
Stay safe for the next few months and when your able to work on your home again, please keep us informed.

Jeremy Baker wrote:How’s it going over yonder?  Any updates. What have you figured out? Thanks


Jeremy Baker wrote:How’s it going over yonder?  Any updates. What have you figured out? Thanks

Sorry for not giving any updates yet! A lot of things have happened in the meantime. We have been very busy with the build of the house.  We decided we first needed to tackle building the house so we can move in the property before continuing with the hydro project. We still have every intention to continue the research to create hydro-power, but it is clear to us that the task, specifically the permit part is going to be a daunting one. Better to have settled in the town first and then start to connect with the right people.

We did however already start connecting with our neighbours, who could tell us a lot about who owned our mill before us, and interestingly, who owns the plot of land adjacent to ours that houses the old ruin of the aquaduct that used to bring up the river water up to the mill. Having permission to use the land would help a great deal into getting the permits to get the mill reconnected to the river!

We also came to learn that the original millstones of our mill have not been lost to time, instead we have been told they have been turned into a small monument in front of the church of the small village that lays beyond the mill. We haven’t gone to find the stones yet, but we do very much look forward to discovering the rich history of our mill.

In the meantime things have been slowly progressing with the build. Getting all of the building permits was a kafkaësk nightmare, and the COVID lockdown sure didn’t speed things up! But we finally started building this summer! It is exciting and nerve wracking at the same time! But what a pleasure seeing everything slowly come together!!

I’ll post some pics of the progress so far. We’ve decided to use all of the traditional materials and architectural elements from the region, but use them in a contemporary manner, though keeping in tact all of the original parts of the mill that survived. I know for some this might not be a popular idea to add modern elements to a historical watermill, but it was a very conscious decision. Rebuilding a more or less brand new mill, but making it look old feels rather unauthentic to us. It becomes a fake facade, something that dwells in the past. We do not want to write off our mill as some relic from the past. Instead we want to give it a future. Show how old technology and traditional craftsmanship can go hand in hand with the now and tomorrow. Both in terms of the aesthetics as functionality. Who knows, maybe one day our old grain mill might produce electricity!

All of the wood we use is larch wood, treated only with linseed oil. Larch is a really good rot resistant wood that is used extensively in the traditional rural houses here. Usually they leave it untreated even. Initially rather light of color, it turns into a rich warm orange brown over time, and eventually after much exposure to sun and rain, a beautifully weathered ashy dark brown. Everything from the roof, the ceilings, windows to the wood floors will be made from larch.

For the exterior wall on the north face of the mill we used traditional stone masonry to build onto the original stone foundation of the mill. It was such a treat seeing the craftsmanship that goes into building the walls, each stone carefully chiselled into the right shape on the spot.

We kept the windows and doors close to where the holes for them were on the original mill, but adding glass where closed doors used to be, adding back the original inspection window near the waterwheel so it can be observed from inside, and adding one big window in the kitchen that extends outwards from the wall giving full view of the forest. All traditional houses in the region have a arched window in the attic. Ours had one as well. We kept the arch, but extended the window to the floor, to open up the dark attic space and let the light and the view of the gorgeous forest flood in.

The inside of the house is still unfinished, will show that later once it’s progressed, if anyone’s interested.

Johannes Schwarz wrote:Looks good!
But as someone who has bought and made habitable a hut in the Italian Alps in 2015, I have to ask: which valley are you guys in? The fact that the roof is tiled indicated that is not my area - which ist off the Val d'Angrogna (where stone slab roofs are universal) but just out of curiosity, which Province are you in? Has a Verbano/Varese Feel.

Hi Johannes, we are in Belluno, situated between the Lagorai and Dolomiti Bellunesi mountain chain. So we're basically on the completely opposite side of the Alps in respect to where you are, unfortunately!
Looking forward to hearing more about your adventures her in Italy!