posted 5 years ago
I've ordered 3. If the description is anything like the reality this has got to be the most under rated tree in the world. Anyone had them? Postivies and negatives? I know they are natural to the United States but can be hard to transplant because of feeder roots. I've got mine coming in pots so hopefully they'll do ok. If that banana cream and vanilla custard description pan out....amazing!

Russell Olson
Posts: 184
Location: Zone 4 MN USA
12
posted 5 years ago
I've got them growing in zone 4 here, probably as far north as they will go.
They are slow growers to start, need plenty of TLC when small, and I found they don't like hot sun at all. One of mine is thriving even after the absolutely brutal winter we had last year(coldest of my life).
Good luck!
Ian Taylor
Posts: 59
Location: Grafton NY, 25 Miles east of Albany
9
posted 5 years ago
They also produce strong insecticidal compounds similar to the Neem Tree. There is apparently some research about using an extract in organic farming.


The fruit doesn't keep very long once picked so that would be a disadvantage though.
elle sagenev
pollinator
Posts: 2328
Location: Zone 5 Wyoming
327
I like...

Russell Olson wrote:I've got them growing in zone 4 here, probably as far north as they will go.
They are slow growers to start, need plenty of TLC when small, and I found they don't like hot sun at all. One of mine is thriving even after the absolutely brutal winter we had last year(coldest of my life).
Good luck!

Hmm on the hot sun part. Most of the area I'm planting is hot sun. To think on this now....
John Wolfram
pollinator
Posts: 740
Location: Porter, Indiana
70
I like...

Ian Taylor wrote:They also produce strong insecticidal compounds similar to the Neem Tree. There is apparently some research about using an extract in organic farming.

As others have mentioned, transplanting pawpaws can be tough. My best success has come through buying paw paws by the hundreds from the state nursery ($30 for 100!!!) with the expectation that a good number of them will die.

Did you order from One Green World? While they are the most expensive, they also ship the highest quality pawpaws:


Also, be sure to give your paw paws lots of water their first year. Even watering once a week (in Indiana) can be insufficient in Indiana:

Did you order from One Green World? While they are the most expensive, they also ship the highest quality pawpaws

I ordered from Stark Bros. I've ordered a ton of trees from them and so far they've all been healthy and are thriving! I hope the same for the pawpaws.

Thanks for the tip on watering. I am going to have to modify my planting plans for them I believe. Glad i posted this.

posted 5 years ago
I have a grove of wild paw paws in 2 acres we have in the Shenandoah Valley. The biggest one I have harvested is the size of palm. They are delicious, custard like with mango, banana & tropical fruit flavors (soursop, custard apple). The fruit will not keep for long once it ripens. If the harvest is plentiful, the pulp can be frozen and used in ice cream, & baking.

They are understory trees, however will do well in full sun once they are fully established. You might want to shade them after planting until they grow up. The tap root is very deep, that is why they transplant poorly.

I am burying seeds at my work and around my property in town. From what I have read, the seed sends the taproot first then it sends a shoot. It is a s-l-o-w grower at first.

We can green the world through random acts of planting.

Ghislaine de Lessines
pollinator
Posts: 261
Location: Vermont, annual average precipitation is 39.87 Inches
43
posted 5 years ago
I planted seeds out in my woods this spring and I picked up a couple of improved varieties from a local nursery this fall. I planted those under some ninebark bushes that I'll remove once the pawpaws get to a good size. I'm also in zone 4 so I was happy to read Russell's reply to you! Good luck with yours!

Sean Banks
Posts: 155
5
posted 5 years ago
To me the taste was more like pineapple with the consistency of custard. It also has a bitter aftertaste but not too bad. It is certainly underutilized but that could be attributed to the fruits very short shelf life...within a week some of the fruits were moldy. They seem to grow best in the understory of deciduous trees like tulip poplar, sycamore, and black walnut with a deep fertile soil along waterways.
Akiva Silver
Posts: 175
15
posted 5 years ago
I don't think the paw paw is close to the most under rated tree. I think that title has to fall to the American persimmon. I've eaten lots of pawpaws, there is a planting of 400 grafted trees near here. After eating them for more than a few days in a row, I always feel kind of sick and nauseous. The best way I feel good about eating them is as frozen pulp in smoothies. I honestly think they are a good fruit and a beautiful tree, but don't see how they could be a staple in my diet.

posted 5 years ago
Thank you everyone!!!

Posts: 1029
Location: Northern Italy
23
posted 5 years ago
I have one growing from seed, two in the ground, and 2 more waiting to be transplanted. I agree that it's difficult at the beginning. Probably best to start from seed in the ground and graft onto a more mature tree. Also artificial or natural shade might help, tends to struggle through summer.
William

posted 4 years ago
Did my Paw Paw seeds finally germinate? 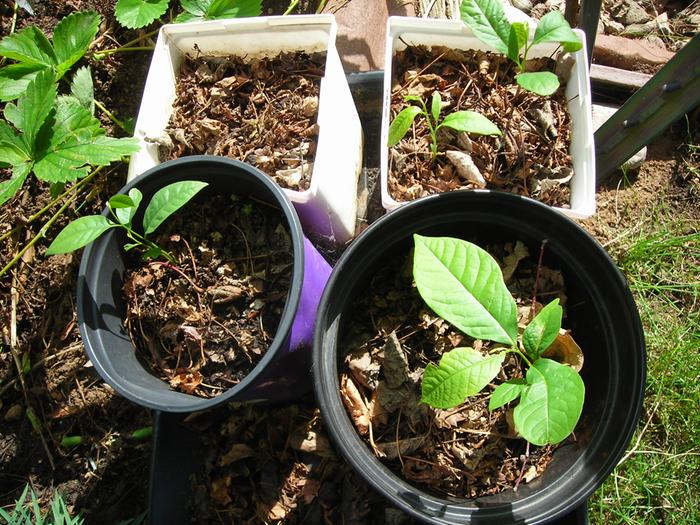 posted 4 years ago
That's pretty similar to what mine looked like (before they died).


Those sure do look like pawpaw leaves. Make sure they get plenty of water.

posted 4 years ago
OK, I will put them in bigger pots soon. They get water from a sprinkler, right now, about every other day.

posted 4 years ago
Keep them partially shaded until are at least 3' tall. They're understory trees but will take the sun once fully established.

We can green the world through random acts of planting.

Alfred Scheib
Posts: 3
posted 4 years ago
After hearing the pawpaw song since I was a child in Central PA, I finally saw my first pawpaw tree in the woods near my house at Millersville PA in 1990. The oldest pawpaw Grove in the philadelphia area that I know of is an acre in Pennypack Park, with a history of no fruits ever been found on any of the trees. See book Pawpaw, 2015, by Andrew Moore. I have several pawpaw trees started from seed purchased from Hilltop Acres (see their website) in my veggie garden nursery. I'm hoping to plant them in the woods near me and in several parks nearby.
Jay Emm
Posts: 21
Location: Southern Ontario, 6A
I like...

posted 4 years ago
If I could give only one piece of advice it would be to buy your pawpaws potted.  My experience has been that up to 50% of bare root transplants die in their first winter, and most suffer horribly before they bounce back.  Potted seedlings and grafted trees, meanwhile, tend to do fine.
Alfred Scheib
Posts: 3
posted 4 years ago
I know pawpaw trees, but I found 2 in a new place yesterday that are so VERY similar to pawpaw trees. One is the usual max. 6" dia., but the other is about 10" dia., larger than I've ever seen, including the old large grove in Pennypack Park. No fruits & no little ones below, but the large properly shaped leaves & bark are right.
I googled & found no satisfaction. Help?