posted 7 years ago
I once heard about a fancy pants, ivy league art school. The guy talking about attending the school explained that when he showed up as a freshman he wanted to learn how to be a great sculptor. For the first semester he sees that he will spend two hours, EARLY, every morning, monday through friday in a sculpting class. He shows up and is in a room by himself. The instructor walks in slaps a blob of clay on the table and explains that he has two hours to sculpt a head. BEGIN!

At the end of the two hours, he thinks he has done a reasonably good job for his first day - and given only two hours. The instructor comes back into the room and smashes it. "See you tomorrow."

The next day: "you have two hours to sculpt a head." Two hours. Smash.

It's like he isn't even looking at it. He doesn't give any feedback.

For four years, two hours a day, monday through friday: sculpt a head and smash.

The guy telling the story explains that at the end of the four years, the heads he could sculpt in two hours were rather magnificent. It is a pity they were all smashed.


In 2003 or so I had so much stuff rolling around in my head that I needed to express that I decided to take a drawing class. On the first day of the drawing class, the instructor showed us the amazing stuff he had drawn. It was all amazingly cool. His stuff would often be used on the cover of the weekly magazine, or as art in all sorts of things. Or as art!

He said there is nothing he can teach us. Learning to draw is 100% experience. You just sit down with paper and a pencil and draw. Call it doodling if you want. The more you draw, the better you get. If you become obsessed with drawing and spend fifteen hours a day drawing, then you can probably get some stuff published in a couple of months. If you spend an hour a day drawing, that point might come in a few years. He was emphatic that no amount of teaching or advice would change any of that. The only thing a teacher can do is to get you to spend some time drawing instead of doing something else. So, that's what the class was going to do.

And that is what we did.


When it comes to homesteading and permaculture, I think that this sort of experience is not 100% of this, but it does make for a good 70%. It helps to know about different tools and techniques. But .... 70% is a lot.

Kyle Williams
Posts: 53
Location: Olympia, WA
7
2
posted 7 years ago
Thanks for that Paul. I need occasional reminders to "read from the book of nature" more often than an actual book, or the forums!
William James
gardener

Posts: 1058
Location: Northern Italy
25
2
posted 7 years ago
Yeah, I was just thinking today "you learn by going through failure, and there's just no getting around it." We're very programed to not want to make mistakes, but they are probably the best learning tool.

That being said, I often wish I had someone around who would say "I wouldn't do that if I were you" and then we could have a discussion about why. Not having someone around means I'm probably making a lot of mistakes that if I had someone just tell me to "wax on, wax off" I would avoid them when I was alone. 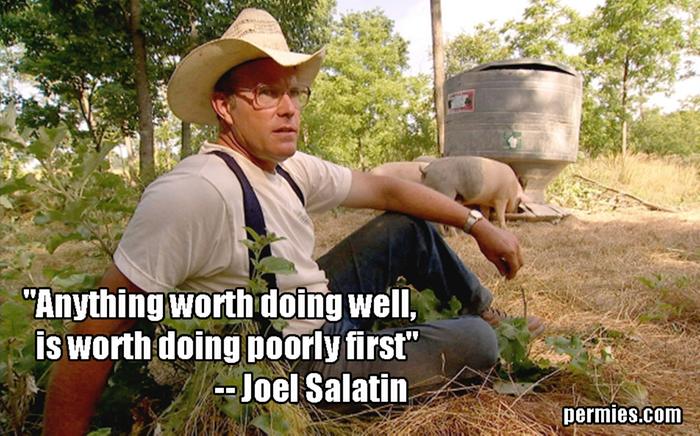 posted 7 years ago
And, "Good judgment comes from experience, and experience comes from bad judgment."
Peter Ellis
Posts: 1637
Location: Fennville MI
78
posted 7 years ago
On the other side of the coin, practice makes permanent, and doing the same thing again and again without any critical review is not a likely path to improvement.

Peter Ellis wrote:On the other side of the coin, practice makes permanent, and doing the same thing again and again without any critical review is not a likely path to improvement.

You're right, I think it might be a question of not observing well and not accepting feedback. When you do something that is wrong and you see the effects of what you've done, most people I think would do some hard thinking afterwards. The reason mistakes lead to experience which leads to making fewer mistakes is the frustration and pain that come with making a mistake. Humans generally try to avoid pain and frustration, so usually we don't repeat the things that bring those feelings.

There might be other factors involved, like making a profit out of a dysfunctional system, which in many ways is encouragement that something swell is being done when it's really not.

posted 7 years ago
I think with any skill be it an artistic one, or a more functional homesteading one there is a lot to be said for the perspective of the student. In my years of teaching guitar lessons I was able to think a lot about practice and how to get people where they want to be with their skills. Like Peter said practice does make permanent, and I think 9 times out of 10 someone who is practicing a mistake is doing so because they are in a hurry to move to the next thing. It takes presence of mind and self control to step back and actually practice what needs to be practiced, that's why having a teacher to guide you can be so productive.

In my own struggle to be a better artist and musician I had to step out and get experiences in public and with others, but I also started to think I could not play the music I wanted unless I put myself in the position to do so, both technically and mentally. So it fits with that Joel salatin quote quite well, start with a rough approximation and hone in on it until it's exactly what you want. That can also apply to my permaculture systems, start with an idea and actually observe its functioning before tweaking, dismantling, praising, or whatever. And if it works then find a way to make it work a little better.

Bottom line is, if a person does not look past their nose with their observations then they probably will not learn from their experiences.
Jocelyn Campbell
steward

posted 6 years ago
I found this story on Facebook this morning and Paul asked me to share it here. It'd be awesome to learn if this is a true story.

posted 3 years ago
You know, I think all the actually valuable help and advice I have ever given or gotten on homesteading matters falls into two categories:

- Preventing horrible mistakes, of the “you are about to cut your leg off with that chainsaw/get gored by that cow/knock yourself off the tractor with that tree limb and get shredded/die of botulism” variety.

- Giving people an example and a framework for things that they thought were overwhelming or somehow mysterious; this usually involves leading them through a process as a participant, usually multiple times, sometimes in different roles in each iteration (a process such as going from live deer + live hog > meat > smoked dry sausage that will keep at room temp for months). Stuff where they would, if left on their own, think about all the equipment and logistics and labor involved and just never tackle it.

The rest is practice, with a balance between brute repetition and thoughtful, experimental repetition, depending on the task and the person and the goal. Don’t screw up so badly you can’t recover, don’t quit before you’ve begun, and then just keep going with periodic course corrections. I agree with your 70% figure. The 30% is where a good mentor really comes in handy, and for probably 20-25% of that you can act as your own coach if you are reflective and persistent and have access to resources in the form of books/internet/etc (and are careful and situationally aware enough not to accidentally remove yourself from the gene pool).

Jocelyn Campbell wrote:I found this story on Facebook this morning and Paul asked me to share it here. It'd be awesome to learn if this is a true story.

This is a GREAT book:  Art & Fear: Observations On the Perils (and Rewards) of Artmaking, by David Bayles and Ted Orland.

I read it in art school right after it came out. I read (listen to) it again (on my phone) last summer while I was working on my farm.

It took us a long time to get our land and to be able to move to it. Now we have the luxury to try all of the things we have read and dreamed about while stuck in out 1200 square foot house on a 3000 square foot lot in an extremely urban setting where I could stretch out my hands and touch my neighbor's house and mine at the same time.

The previous posts talk about making lots of mistakes on the way to understanding how to do something right or well. As a school teacher and an art teacher, it is an easy thing to grasp. As a farmer, it is harder to accept. There are so many things that need to be done. It is hard to not take the time to do something well, but sometimes it can have very negative consequences if you d not get it right.

It is nice to be reminded that I am not the only one who struggles with perfection.