Purchased plans from Paul Robinson.
I have constructed a proof-of-concept dome last year, and decided it's better to use a proven design.

Paul appears to know his stuff well, but I didn't get much luck getting a response from him; there were a few ambiguities in this experimental design (it's my understanding that Paul hasn't built this particular model himself yet,)
and I probably did more that a few things wrong, cutting corners figuratively and literally. In particular, what was supposed to be a high point in the middle somehow turned to be a low point, and I will probably need to support it with a pillar before it collapses under snow.

If I started the whole thing now, I would probably resort to spherical design with hubs, and check all dimensions with my own calculations.

Timeline. Last October and November, while concrete was still workable, foundation was put (twenty 6-ft treated 4x4s with twenty "landscape timbers" laid on top.)
During the winter, cut 82 or so triangles, which took about 350 2x2 "furring strips". In March, when the snow was mostly gone, and early April, attached those triangles to the foundation and to each other.
Since the rest of April (two weeks were lost to family affairs,) was sanding the sharp corners, fixing sticking out screws so they don't rip poly film, and painting the whole think white or pink (because there were two gallons of discounted outdoor pink paint.)

Next step is covering with 12-mil reinforced poly film when the temperature rises a bit (if I do it now at 55°F, I am afraid it might sag in 90°F in July and flap in the wind.)

What I am not sure about is the number of vents; I am planning to do two 3-by-3-by-3 ft triangular vents near the two peaks, and several rectangular ones near the base. Any suggestions?

Also not sure about the best way to cover. Usually, if I get it right, the domes are covered with pieces big enough to cover of 2 or 3 triangles at a time; I will try to use 6-ft wide 35-ft long bands for the tunnel section and see if I can reach far enough to attach is all the way.

posted 4 years ago
What are you planning to have in your dome?
If you want to have plants healthy in it all year, I'd recommend many more than two 3x3 vents in the top. We heat our houses with attached solar greenhouses (a totally different design from yours, but anyway, this is our experience) and they get badly overheated in March and April, until we remove them in early May. Our greenhouses are much smaller than yours, and our vent simply consists of an open door, which is much larger than your proposed two 3-foot triangles, but lacks cross-ventilation. Plants suffer badly in the overheating, get aphids, wilt and require watering twice a day, and seedlings tend to get roasted and die. But in March and April the outdoor temperatures are still well below freezing at night so we can't remove the greenhouse so early. It would be a great help to have much more area of operable vents than we do.

Rebecca Norman wrote:our vent simply consists of an open door, which is much larger than your proposed two 3-foot triangles, but lacks cross-ventilation. It would be a great help to have much more area of operable vents than we do.

I mentioned that I plan to have windows in the lower part, with the total area of tens of square feet, can be up to 100 ft², for cold air intake and general heat exchange; the smaller two vents in the roof would be just for hot air exhaust.

Last year I used cheap metal frame greenhouse (its deformed frame can be seen in background,) which was 200 ft² and had some windows for ventilation; results were satisfactory, the plants did not overheat, but the thing was torn apart by the wind by October (and we rarely get strong winds,) so it did not last a single season. In particular, poly cover deteriorated in the sun (and our UV index is rather low). Here I solemnly swear never to buy a cheap substandard tool just because I can't afford the proper one.

Also I use 8x6 Shelter Logic greenhouse (also seen in background,) which has two small vents on its opposite sides, and was happy with it, though its reinforced poly started giving way after two years, the zipper door being the weak link.

I expects the foundation and roof vents combination to work satisfactory; as the last resort, I may install two electric fans with temperature sensor to force the hot air out.

Ultimate goal is, yes, to use the greenhouse year round, but according to my calculations I can't go passive solar in December and January; I am planning to add a thin film on the inside and see how effective does that get.

posted 4 years ago
Further progress. About 50% glazed. Covering with 35-feet long bands did not work as I could not tighten it over individual triangles, so I resorted to rhombus-shaped pieces covering two triangles at a time. On a few occasions, I did tree- and for-triangle pieces.
Note how the plastic is pressed to the frame with wooden lath (I should have painted those too, just for looks.)

Question about number of vents is resolved: I will have about seven of them in the upper part, otherwise I can't reach from below to tighten the plastic.

There were couple of relatively severe storms, and unfinished greenhouse withstood without pooling of water in the flatter parts of the roof; so far so good.
partly-covered.png 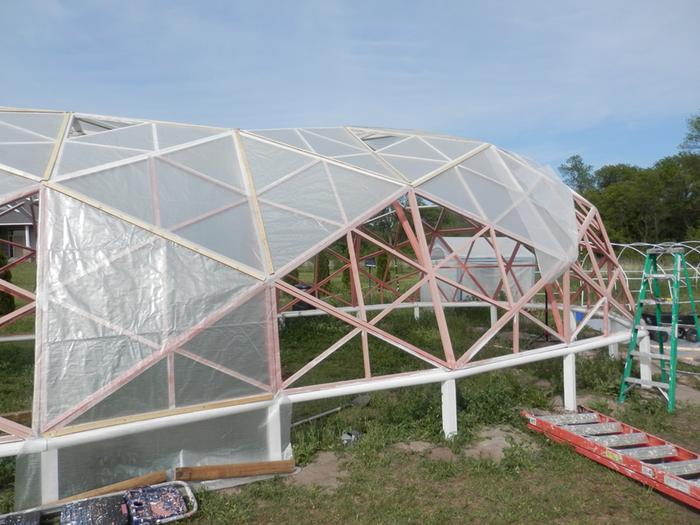 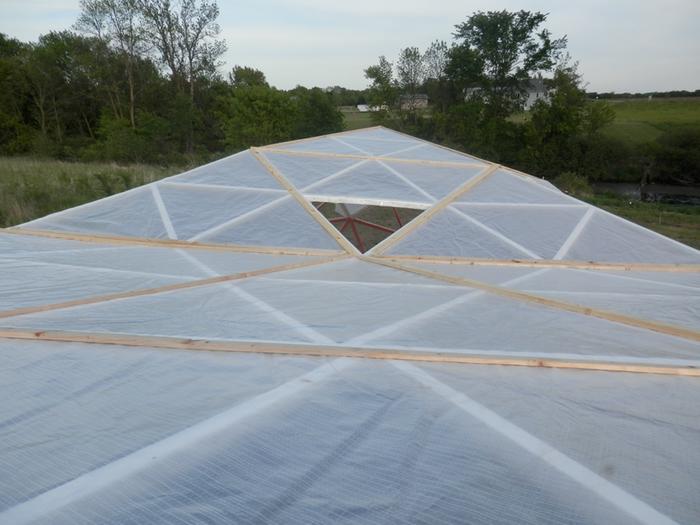 Todd Parr
pollinator
Posts: 1793
Location: Wisconsin, zone 4
95
posted 4 years ago
Make sure you have an equal amount of vents at the bottom of the walls or you won't get air flow and the heat will be trapped even with the top vents open.

Sorry, just re-read and saw that you have foundation vents planned as well.

Devin Lavign
pollinator
Posts: 1022
Location: Pac Northwest, east of the Cascades
272
I like...

posted 4 years ago
Interesting greenhouse design concept, I look forward to hearing how it works and the pros and cons as you get a chance to gain in use info on this.

posted 4 years ago
You may want to consider some extra snow load supports across the middle at the low point between the domes. It's a bit hard to visualize the load paths but I think it may squat down in the middle and push the long sides out. Vertical supports should counter that situation though.

It's a beautiful and creative design!

Devin Lavign
pollinator
Posts: 1022
Location: Pac Northwest, east of the Cascades
272
I like...

I thought the same thing, but in the first pic you can see a door frame on the opposite side from the side pictured.

That particular door location may further increase the chances of building distortion under snow load. I'm sure it isn't a fatal flaw, just something to be aware of and maybe put up a few 2x4's for the first winter to make sure it can handle the weight.

Mike Jay wrote:
You may want to consider some extra snow load supports across the middle at the low point between the domes. It's a bit hard to visualize the load paths but I think it may squat down in the middle and push the long sides out. Vertical supports should counter that situation though.

I agree, and building a support pillar in the center. There are also support struts in the middle section which will distribute some load.
The low midpoint, where the pillar goes, concerns me the most. I will follow your advise and stick a few 2x4 in the ground for the first winter.

All praise, and some of the blame, goes to Paul Robinson. I might be the first person building to this design though, with a few variations.

For a moment I panicked

See the attached picture. Another deviation: the door was supposed to be wider and recessed, but I realized I am better off resting it on the foundation beams.
door-and-post.png 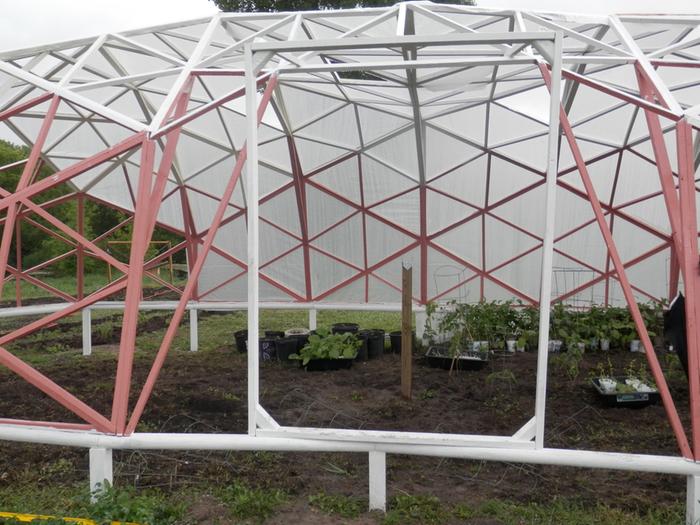 Daniel Bowman
Posts: 86
Location: Sandy Mush, NC
2
posted 3 years ago
I like this design. I would watch out for the solar angle at the upper glazing, though, depending on your seasonal conditions and uses. I have been planning a greenhouse for a few years, now, and have been considering implementing geodesic shapes. The problem with the tunnel configuration is the middle is not as well supported and it can sag if it gets too long. The design I am considering will need some midspan posts to hold it up, but I also want to make my greenhouse much larger (30ft x 120ft)
I started a thread about my design here: https://permies.com/t/59520/Geosolar-Tunnel-Greenhouse

Gail Moore
Posts: 232
5
posted 3 years ago
Here is a link to a 13 page pdf Preview and Update of the GEOquonset designed by PJ Hafer some years ago.

there is no dip in the center of the tunnel. it is all the same height across the top.

I've been envisioning building this with bamboo or Poles of pvc.or ?

using various lengths of poles instead of building the hoops and struts from lumber.

you can buy the ebook for $10 at the green trust website.