I put study in quotes because I think this survey that was sent out was a wee bit biased and majorly flawed. This person is obviously unaware of Permacultures global reach.

Anyway, I'm not sure why this thing was published but it doesn't make permaculture look good and I don't like it.

Jason Silberschneider
Posts: 177
15
posted 6 years ago
I had no real problem with the article. I think it was rather spot on with most aspects of permaculture.

Yes, the majority of people who call what they do "permaculture" are white. I hazard a guess that this is because most while people have found permaculture, and are making a journey back to their ancestral roots. Whereas most indigenous or "coloured" practitioners are simply doing what they've always done, and have never even heard of the concept of permaculture.

That most "leaders" in permaculture are males is neither a good nor a bad thing in my opinion. It comes down to what the definition of a "leader" is, and whether it's necessarily something worth striving for.

What particularly caught my attention was the part, "...income was relatively low, but the level of education and homeownership were higher than national averages." This summed up for me the concept of permaculture by a person who doesn't "get" permaculture. The use of the word "but" in there showed me that a typical expectation is that people with a high education who own their own homes should have a high income. I mean, it stands to reason, right? Perhaps educated people who discover permaculture soon realise that if they pay down their personal debt then they don't NEED a high income, and can live a perfectly comfortable life on a small income with heaps of free time and personal liberty.

All in all I thought this was a perfectly honest and accurate portrayal of permaculture from the viewpoint of an outsider looking in.
chip sanft
pollinator
Posts: 459
Location: 18 acres & heart in zone 4 (central MN). Current abode: Knoxville (zone 6 /7)
52
I like...

The article itself is located here: <http://www.ecologyandsociety.org/vol20/iss4/art39/>. I think that the study was limited by its methodology, which the authors describe as follows:

" The survey was only available in English. We solicited respondents through a variety of electronic and social media, including regional, national, and international permaculture-related email lists and online forums, through permaculture interest groups on social media, and through the researcher’s website. We also asked respondents to refer the survey within their own networks. We invited people who “participated in permaculture in any way” to respond, and the survey was restricted to respondents 18 years of age and older. A total of 1055 respondents began the survey. By virtue of web access and language, our sample excludes important sectors of participants in permaculture, and this exploratory study pertains only to that sector of the permaculture network with web access and facility in English."

First, the goal of involving less represented and structurally disempowered groups in permaculture is laudable. That much more remains to be done is obvious. That's basically the case for all aspects of the environmental movements. Much of that involvement may take the form of we permaculture types learning from traditional agriculturalists, not vice versa.

Second, it seems like this particular study's results are not unexpected given its design and designers. Note: People who speak English are not the whole world.

Finally, if one wants to know what if any impact permaculture is having in the world and who is using its methods, asking about the word "permaculture" on English-language social media is not the way to do it. Going to actual places and seeing actual practices is. That, unfortunately, would be a lot of work and quite resource intensive. But I think it would give better results.
David Livingston
pollinator
Posts: 4328
Location: Anjou ,France
246
posted 6 years ago
Good catch Chip
I often find with such type of projects is folks get what they are looking for. One does wonder what the adjenda is here ?

posted 6 years ago
Interesting study finding that in the USA, Canada, Australia and the UK that permaculture tends to be very white, about 50/50 men/women, and women tend to stay out of the spotlight positions. While every study could be improved, I'm not sure how appropriate the "English-only" criticism is in this case because their results seem to be primarily based on the responses relative to the demographics of the English speaking county those responses came from. 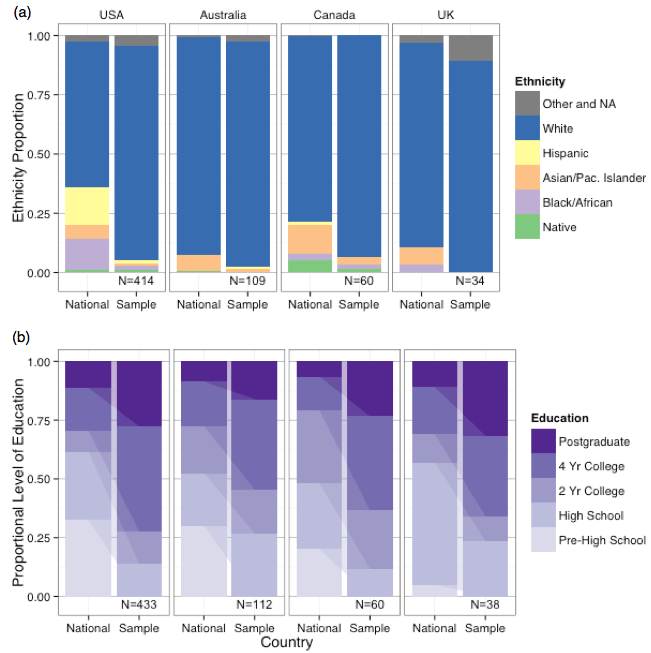 John Wolfram wrote:Interesting study finding that in the USA, Canada, Australia and the UK that permaculture tends to be very white, about 50/50 men/women, and women tend to stay out of the spotlight positions. While every study could be improved, I'm not sure how appropriate the "English-only" criticism is in this case because their results seem to be primarily based on the responses relative to the demographics of the English speaking county those responses came from.

FWIW, I'd also want to know the methodology of the study whose graph you link. It is easy to make a graph; it's hard to design a reliable study.
David Livingston
pollinator
Posts: 4328
Location: Anjou ,France
246
posted 6 years ago
The UK is 86% white http://www.ons.gov.uk/peoplepopulationandcommunity/culturalidentity/ethnicity/articles/ethnicityandnationalidentityinenglandandwales/2012-12-11#ethnicity-in-england-and-wales 2011 census and so frankly everything is mostly white despite the propaganda put about by the usual suspects .
So if you look at Permaculture in the UK it will be mostly* white and .......

note I said mostly not all *

posted 6 years ago
"This apparent parity is tempered by the discovery that women are disproportionately excluded from professional roles in the movement."

Are they actually "excluded" I wonder? Or simply not as famous as their male counterparts?

"The factors limiting diversity and equality in permaculture must be addressed thoughtfully and systematically if the movement is to grow and contribute to sustainability in a meaningful way," Lovell says.

Factors limiting diversity and equality in society in general need to be addressed. So in this case permaculture within white (male)-dominated, English-speaking society seems to reflect problems inherent in that society. Which isn't very surprising to me.

What a cracking loaded statement ! One does wonder if "a meaning ful way " is the same for the writer and myself or indeed anyone else in for that matter

also implies that it does not do so at the moment

How to win friends and influence people

posted 6 years ago
Exactly, "meaningful" compared to what? What other movement is contributing to sustainability in a more meaningful way than permaculture? Even other sustainability movements such as Radical Simplicity and Transition have permaculture as one of their core concepts, as far as I can tell.

David Livingston
pollinator
Posts: 4328
Location: Anjou ,France
246
posted 6 years ago
My suspition is that person has another way lined up for us all to follow . With her/his self at the helm maybe

posted 6 years ago
My suspicion is that person has no clue how to pursue sustainability, if they're wasting their time complaining about permaculture.