I’d like to learn how, for you, RMH firewood consumption has compared with more conventional wood-heating equipment, once you got the mass heater up and running.  Can you give a general figure for about how many cords of wood it now takes you to get through your winters? And what type of wood (softwood, hardwood) are you burning?  Also, if you reply a little info about your home situation would be great – your length of winter, type of winter climate, square-footage of house area you heat, how your home is insulated… stuff like that.

I want to get reliable, experience-based info.  Because retrofitting an RMH in our place would be a big effort.

Our current situation is that we’ve been heating a two-floor house (total: 1600 sq ft) with wood heat.  It’s a frame house built in 1974 with 2x4 stud framing and fiberglass insulation, plus rough-sawn wide-board and batten exterior siding (well over an inch thick), and 11-inch-deep insulation above the second-floor ceiling.  We heat with a Pacific Energy fireplace insert (built-in fan moves lots of heat out into the room).  The original fireplace was built with an extensive brick facing, with convection portals above the fireplace front, and the brick mass absorbs & holds heat from the insert and flue and radiates it into the house.  Because of the stairwell up to second floor, the set-up does a good job of heating the whole house.

When we moved into the place there was a ducting system for a wood furnace in the basement.  We lived with that heating system for a number of years while we gardened and began altering the house.  When we switched to the fireplace insert, our winter firewood consumption diminished by about 20%.  In an average winter, we burn about three cords of mixed local softwood.  In what we consider a cold winter, we burn about four.

I’ll be grateful to learn about anybody’s experience switching to an RMH.  Thanks.

Yes, that's a good thread that offers some interesting and compelling info.

By the way, I have no axe to grind (pardon the pun).  I'm not stuck on the notion that, in our home, we currently have the best woodburning technology.  I'm open-minded and, I guess you might say, questing.  In almost any topic on any forum I belong to, I really like to learn of the personal experiences of other forum members.  To me, replies of that sort are often as valuable as lab tests (and tend to highlight other aspects of the complete picture).

Dave Lot
Posts: 153
7
posted 4 years ago
I wonder how many people out there are like me.  Never had a wood stove, never wanted one . . . one day I needed a shop heated, and someone suggested a RMH.  So I don't really have a comparison for you . .

All I can say about my little dragon, is that I tell people that one hard wood skid will burn for X number of HOURS . . . and they look really surprised and say "That's all it burns ? ! - for that long ?? "

This takes about 80 minutes to burn : 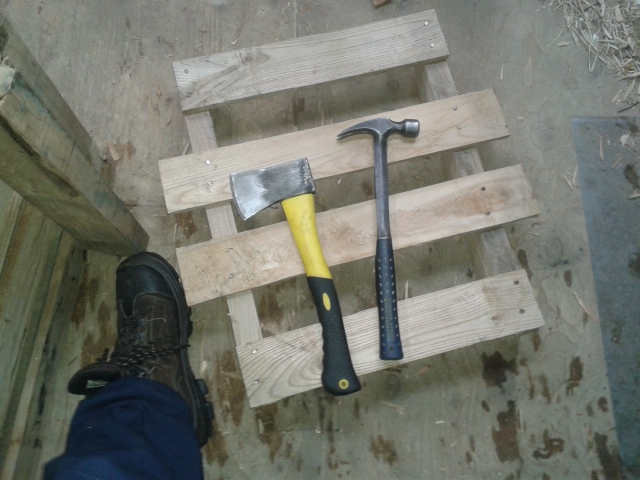 posted 4 years ago
Thanks Dave.

Like I said above, the thread that Byron provided a link to is informative.  I think Paul Wheaton’s comparative comments, though not in themselves a “controlled study”, are pretty compelling.  The proof of the pudding is in the tasting.

Of course that linked thread in itself leaves questions about retrofitting an RMH into an existing living structure more or less unaddressed, and my opening post concerns that topic.  We've got to face the fact that millions and millions of North Americans are living in the countryside with older or more conventional heating equipment already in-place and relied upon.

Point being, it will be great to have people respond here about these sorts of aspects:  What was it like for you to dismantle and remove your old heating system (including flu/chimney aspects)?  Were you able to arrive at the right RMH design & construction method on first go, or did you have a trial and error process?  Did you use the most basic DIY materials, or did you buy rocket-stove components factory made?  Did you have to restructure your floor's support framing in any way to support the mass?  How much wood were you burning before (averaged through local climate variations), how much wood have you been burning since (averaged through similar variations)?  In your local situation, has it been simple for you to provide the small cross-section RMH fuel wood?

And then: How long have you been using your RMH set-up, and what sort of maintenance has the system required?

I'm sure that other people considering the retrofit option can think of questions that I've left out, too.

Posts: 3579
Location: Upstate NY, zone 5
224
2
posted 4 years ago
These are all good questions. I have a feeling, though, that most of the people who would see this thread and have experience they are willing to share have already done so in their own build threads. I hope they will stop by and provide at least links to their info.
Dave Lot
Posts: 153
7
posted 4 years ago

Of course that linked thread in itself leaves questions about retrofitting an RMH into an existing living structure more or less unaddressed, and my opening post concerns that topic.  We've got to face the fact that millions and millions of North Americans are living in the countryside with older or more conventional heating equipment already in-place and relied upon.

I agree with you that there are lots of older and very reliable heating systems out there, but are they better ?  I was just out in the shop yesterday, burned the rocket for a couple of hours (shop up too 55 F ) Then I went out and burned it again for two or three hours .  .. and the shop is now at 77 F . . . while I apply some fiberglass . .  I really wish I had one of these things in my house . . . not necessarily to replace the existing heating system, but as a backup and supplement.  Ya wanna light a fire . . burn it for 4 hours while you watch t.v. at night ? . .  it will take over the heating systems loading for most of the night.

Working afternoons and don't have time to light the fire ?  Then the original heating system can take over.


Joel Bercardin wrote:
What was it like for you to dismantle and remove your old heating system (including flu/chimney aspects)?

Would you want too remove the old system ?  Me personally, a rocket stove can be the main source of heat, with the existing as a backup, or the rocket can be a backup to the existing system.


Joel Bercardin wrote: Were you able to arrive at the right RMH design & construction method on first go, or did you have a trial and error process?

This is my first rocket stove, and I am happy with the results . . . there is some low temperature condensation in the last 5 feet or so of mass, but, I would imagine that if this same unit was in my house, at a constant 75 F . .  the exhaust gases would leave the stove at a higher temperature . .  since the mass would not be below freezing like out in the shop.


Joel Bercardin wrote: Did you use the most basic DIY materials, or did you buy rocket-stove components factory made?

When I built my stove, everything I read was geared to the DIY-er  . .. fire brick, sand , clay, perelite, one barrel . .  and a bunch of black chimney pipe . . . got that, now go build it.  I used some galvanized pipe in the mass, since the temps are lower.  No "rocket stove" pre-made parts.


Joel Bercardin wrote:  Did you have to restructure your floor's support framing in any way to support the mass?

My shop is built on a 2x6 floor - on top of 3 - 6x6 pressure treated beams on a floating footing ( 3 trenches filled with gravel) . .  when I built my rocket stove, and since I was looking at around 2 or 3 TONS of weight . . .  I made the personal decision to add another 6x6 post equal distant from the one under the stove . .   so my rocket stove is sitting nice and firmly on solid ground with the weight distributed full length between the two beams ..... no added stress on the 2x6 flooring joists....

If I can get the wood to split into smaller slices, I can see temps over 1,000 F on the outside of the barrel . . . up to 8 or so sticks burning at one time.


Joel Bercardin wrote:
And then: How long have you been using your RMH set-up, and what sort of maintenance has the system required?

I built this little beast about 2 years ago, and use it too heat my shop.  It does a great job too !  At the beginning of the heating season (Sept or Oct) I opened all the cleanouts on my rocket stove, thinking that I would have too run the chimney brush thru the mass . . but the pipes were still clean . . . not shiny new, but not all plugged up with gunk either . . . a bit of ash settled in bottom curve of the pipe, but surprisingly clean for a wood burner.

Of course that linked thread in itself leaves questions about retrofitting an RMH into an existing living structure more or less unaddressed, and my opening post concerns that topic.

That is because for most people, we can't - that includes me.  I would LOVE to have one of these things in my house, but until I get the appropriate approvals, it's not going to happen. I helped my buddy install a regular wood stove in his house, and watched him one night fire it up - go thru a burn cycle and then go out - give me my rocket stove any day.  Yes, I do have too split the wood finer than a regular stove, but the amount of fire wood that my buddy carried into his house would have fired my rocket for the entire winter season . . . and he did that two or three times that year . !

hope this helps ya.  Any body else ?

posted 4 years ago
A great reply, Dave.  I understand the issue of codes presenting a major hurdle for many people who would want or need to have home insurance along with their wood heat.  But as to the practical and technical aspects, your post is a huge contribution since it provides the sort of info a lot of people would want before they'd take the leap to building-in a RMH.