Has anyone propagated lamb's quarter in any way-seed, etc.?

posted 3 years ago
I wanted to know if anyone had saved lamb's quarter seed and planted it the next year with success.  And yes I know that it grows like a "weed" in certain areas.  But lately, not so much here.  In the past, my grandfather put in many annual gardens on this same property and it seemed like you couldn't get rid of it.  Now that I've stopped tilling the past 15 years and have initiated a food forest, I can't seem to find any.  I even turned over a small patch of ground hoping some would volunteer this spring, but no luck.  There's about five acres that I've searched and only found five small plants beside some trees I planted this year.

If I thought I could germinate the seed from these plants, I'd do it, but it would be nice to hear from someone who has done it themselves.

I wanted to know if anyone had saved lamb's quarter seed and planted it the next year with success.

Yes, I save seed every year and usually gather the dry seed and plant it right then everywhere I can.  This year's crop I'm still thinning...sowed way to thickly.

I've saved seed and planted in the spring also but like just letting it winter over and pop up when it likes.

The only issue there is, that I know of, is needing to choose the plant (or two or three) early to let go to seed.  I keep picking growing tips to eat all summer and that prevents the plant from going to seed until too late to make viable seed, so just mark one or two plants so no one picks them starting early summer,  soon anyway...

If you just pinch the growing tips for greens to eat that makes the plant kind of bushy and it also makes more seed.

EDIT...when we first moved to this place less than two years ago, I was in a panic because I could only find two lambsquarters plants....I let them both go to seed last year and spread it over any bare soil I could find.  This year it has been our favorite green, prolific.  As far as I know it only spreads by seed and is an annual.

posted 3 years ago
Come here, I am up to my armpits in it. At least it seems like it. At least I'm getting my greens (I can't eat lettuce so this is my go-to green to replace that).  I have a beauty in the middle of my opuntia bed, I'll let that one have the honors then of making me seed. Thanks for the info and advice!

.I let them both go to seed last year and spread it over any bare soil I could find.

Thank you Judith,  Just to be clear, you didn't loosen the soil or clear it?  You just sowed the seed on top of bare areas?  Thanks again.

Marcus Billings wrote:
Thank you Judith,  Just to be clear, you didn't loosen the soil or clear it?  You just sowed the seed on top of bare areas?  Thanks again.


Marcus, what I did last year when the seed heads were mostly dry, was cut whole branches and shake the seed everywhere in the garden that wasn't heavily mulched.  I didn't do anything to the soil surface (it was bare after digging our sweet potatoes and cleaning up other things) but did lay the lambsquarters branches on top of the raised beds also just loosely.  Other years I've spread just the seed and then really really lightly mulched with grass clippings or a fine straw just so the soil wasn't so bare....no solid mulch though.  I think they would be fine without mulch.

I planted way too thick last year and the beds were solid seedlings....might be good for weed suppression but I did gradually thin them to just a few individual clumps and they are now bushy and  stocky from pinching out the new growth to eat.

We have both the wild lambsquarters and a domestic version that folks here call 'gossip weed' that has somewhat larger leaves and a very pink center....easier to spot but not as tasty.  We eat a big pot of the leaves cooked almost every day.

Try planting a few different ways and see what works for you and your garden...I don't think it hurts for the seed to have some cover, loosened soil, but I usually just sow on the surface...the seeds are tiny so are easily beat into the surface by rain.

I do notice the biggest healthiest plants are in the garden beds...other places the seed germinated but the plants were much smaller.

Marcus Billings wrote:
what I did last year when the seed heads were mostly dry, was cut whole branches and shake the seed everywhere in the garden that wasn't heavily mulched.

Judith, Again, thank you so much.  One last question and I'll stop bothering you!  What time of year did collect the branches, late summer, fall?

What time of year did collect the branches, late summer, fall?

I cut them when the seed was ready and shook out what I could to plant and then roughly chopped up what was left and put on the beds...I think it was late summer early fall.  Just watch for the seed to shake out when you tap the seed heads...they will fall into your hand. It's never a big rush and they seem to mature at different times on the same plant.

robert e morgan
Posts: 38
Location: ne kansas
posted 3 years ago
feed the plants with seed to some pigs . the next year the pen will be solid lambsquarter. sowed and fertilized in one move  mnt

posted 3 years ago
I haven't saved seed yet, but at this time of year in Portugal most of the green stuff, including fat hen/lamb's quarters is getting a bit past its best so I'm going to save seed off the three rather lush plants growing right outside my door, if they ever get around to going to seed... 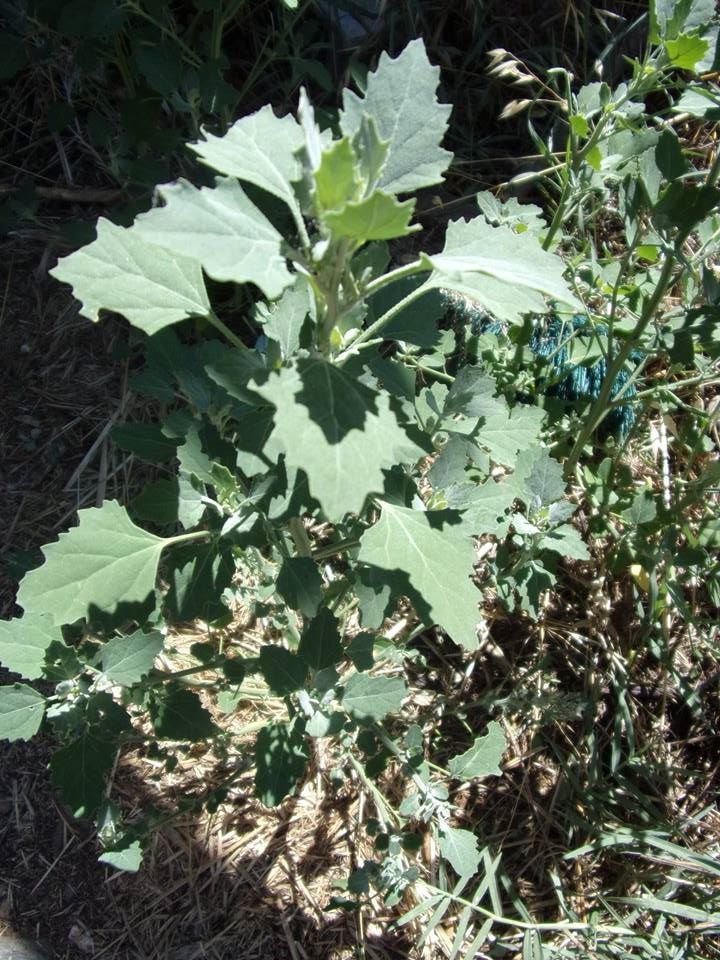 Judith Browning
Posts: 7697
Location: Ozarks zone 7 alluvial,black,deep clay/loam with few rocks, wonderful creek bottom!
1510
posted 3 years ago
...more pics.  The pink centered is 'gossip weed' and the other is wild.  I've been pinching these back a lot and this thread has reminded  me I need to mark some seed plant for both varieties.  We have clumps of them among other things in the garden and everyone seems to get along well 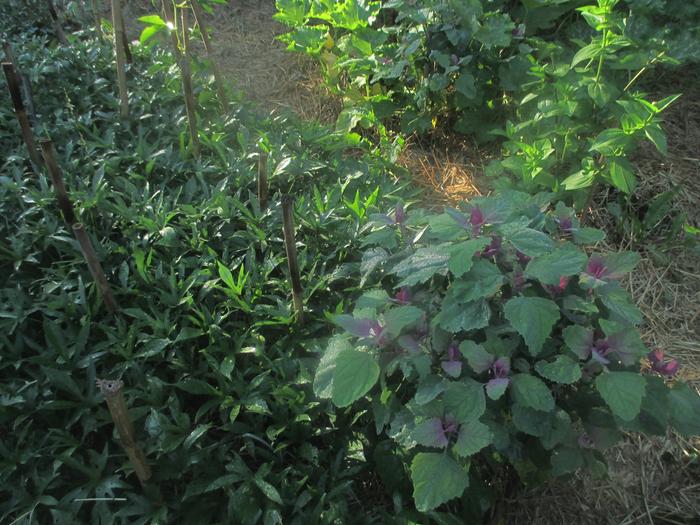 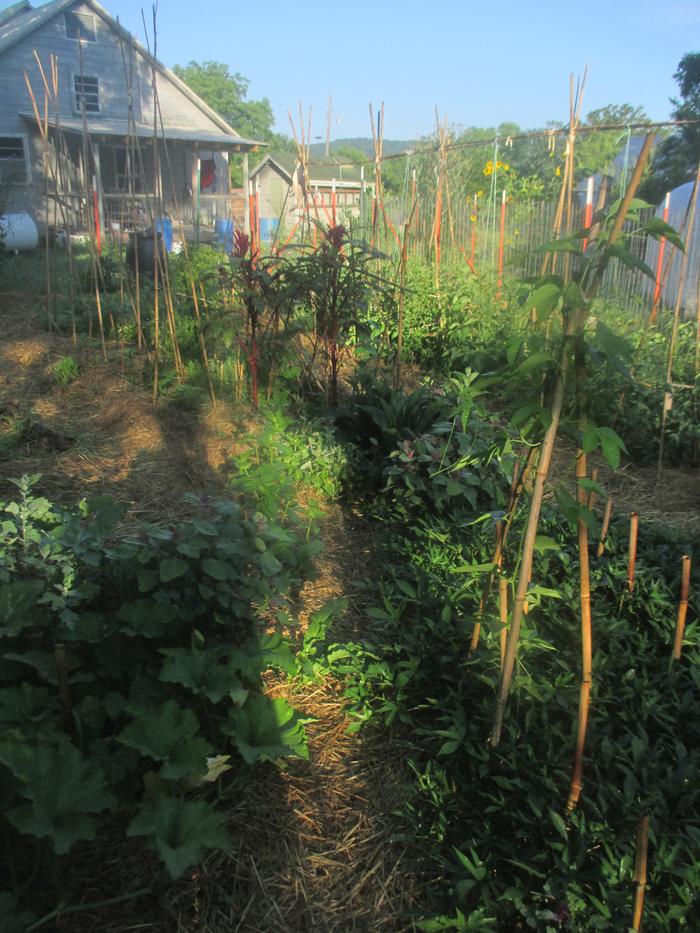 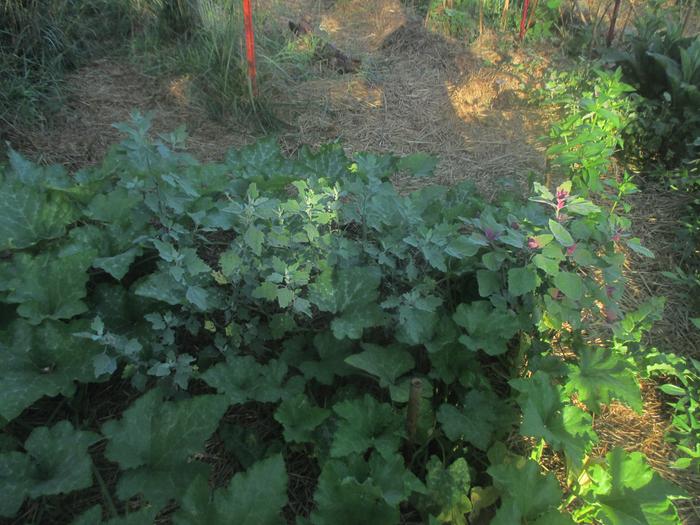 posted 3 years ago
Well, we've got no shortage of lambsquarters / fat hen (Chenopodium album) right now so I've been eating some every day. Sometimes I cook up "a mess of greens" with an onion and eat it with chapattis, and lately I'm on a kick of adding it to a cheese sauce on pasta. A few weeks ago, the mallow (Malva neglecta) and weedy amaranths were small and easy to pull right out out along with lambsquarters, but now their tap roots are becoming tenacious and the flower or seed portion makes them less palatable, but anyway now the lambsquarters leaves are getting big and much more worth collecting in larger amounts.

Pretty soon our mystery local weed will get big enough to collect, a fragrant oak-leafed thing that I think might be a Chenopodium; in previous years I eagerly collected it all and it wasn't spreading much, but I'm happy to see this year I must have missed some in the lower garden because there are a lot of small ones there.

Maybe there are other delicious edible weeds in your garden, if you learn what they are. 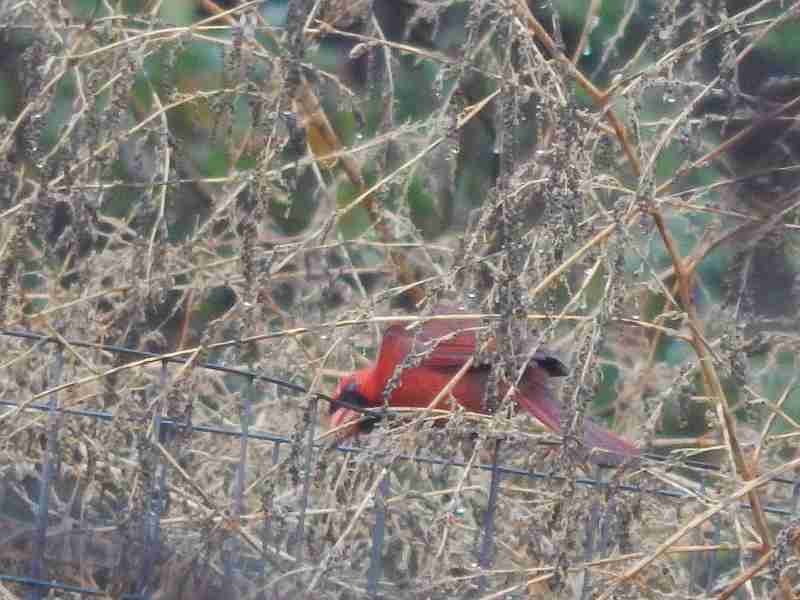 Chenopodium should be easy.
Are you sure that you left the seed on the plant long enough?

I allow my best plants to set seed, and the birds drop enough for a nice patch.
I also tossed entire plants into the new garden area.
None of the seed collecting or branch pruning for me.

I did collect some seed, and after winnowing in large bowl, added to pancake batter for additional fibre.
Ryan M Miller
pollinator
Posts: 250
Location: Dayton, Ohio
76
I like...

posted 1 year ago
I plan on growing some Lamb's Quarters in my garden this year from some seed I saved, but I don't know if I need to rinse off any remaining chaff clinging to the seeds or saponins before planting them in order for the seeds to sprout. I have never been able to successfully sprout Lamb's Quarters from seed when I plant it directly in my garden the same year, so there must be some germination inhibitors in the seed I'm not aware of.
Over Christmas, I got the chance to winnow some Lamb's Quarter seed I had collected in October of last year (images below). I rubbed the seeds between my fingers to free the chaff from the seeds and then lightly blew off the chaff from the seeds held in a shallow dish. It took me several evenings to use this method to winnow 3.2 ounces of seeds. This was my first time trying this method, but it might normally take less time for people more familiar with this process. I the process from one of Aaron Thatcher's videos on Youtube. He sent me a link to his video when I asked him how to winnow smaller seeds. He uses garden sorrel in the video (Rumex acetosella), but the same process can also be used to winnow Lamb's Quarters and Amaranth: https://m.youtube.com/watch?v=8SE8l0CfMdo
D8201205-1D38-430E-AF71-8B63D4C4031E.jpeg
2BE89C30-88BB-404A-B5CF-8537A5FD0129.jpeg
E8BD2EE8-AB56-48C1-8BF3-11BF87862A9A.jpeg

posted 1 year ago
Update: I planted the lamb's quarter seeds in the middle of March along with some quinoa seeds, and about half of the lamb's quarter seeds sprouted. Perhaps the wild plants require a longer period of cold to consistently sprout, but it may just be the normal pattern of sprouting for this plant. I have already made about four batches of steamed lamb's quarter and quinoa this year. I plan on saving lamb's quarter seeds from the plants that sprouted earliest. Hopefully I get a more consistent germination after a few generations.
372E92F9-C82A-42EF-846F-0EFBD528C64F.jpeg
2C7F24D6-69B8-40D5-8675-98A24588087A.jpeg
5AB8B7C4-35BA-47FB-8878-5F58B659B023.jpeg

posted 1 year ago
I recently found a blog post explaining the best way to break the dormancy period for lamb's quarter seeds. Besides planting them the Fall prior to growing them, you could soak the seeds overnight, change the water, rub off the saponin layer in a fresh change of water, rinse off the coating that floats to the top, then plant the wet seeds immediately in the garden. I haven't tried this method yet, but I plan to use it next year when I grow lamb's quarters again.