posted 2 years ago
One of my projects this year is to make a plan for improving my road to the point where someone without a high clearance vehicle & tough tires is comfortable driving down. I have just under a mile of dirt road in highly varied condition. About 3/4 of the mile is flat and rocky. About 1/4 mile is on a decent slope. And about 100ft on a very steep slope that has patches of old asphalt crumbling away. The road is structurally sound — there are no washouts (15 years without any maintenance), and have ditches and culverts where appropriate. But, the surface of the road is in bad shape. Rocks rocks rocks. Weather is on the extreme side of Mediterranean. 50ft of snowfall (around 50in water) from November-April, no rain from May-Oct (sometimes light thunderstorms, never enough to have surface runoff). Soil is a sandy mixed loam. The road mostly cuts into the granite mountains with very shallow soil depth.

I have a good handle on dealing with water runoff and preventing erosion. What I don't have a good handle on is how to make the surface smooth-ish without spending tons of money importing road base. I have a front-loader / backhoe, 4WD truck, a lot of land for raw materials, and lots of patience. If i can improve it 100ft at a time, I'd prefer that route. We are very remote, so importing road base would be quite expensive. There's a chance I may be able to get some local asphalt grindings, but I've yet to make that deal.

I've attached a couple photos of a good section and a bad section. You might notice a few rocks. This is where I struggle to understand what the proper strategy is with the rocks. If I scrape off the smaller rocks (say by dragging a log behind my truck), I just get down to even bigger rocks. Some of these rocks are maybe 2-3' in diameter. Which brings me to another question… how would machinery approach this problem? It seems to me that any kind of grading blade would get wrecked by these huge buried boulders. But again, I have no experience with this type of stuff. In my head, I imagine grabbing a front loader of subsoil & small rocks, dumping it along the road, then smoothing it out with a heavy log. The idea being that the dirt fills in the rocks, rather than scraping the rocks off. Half of me thinks this is a good idea, the other half of me thinks that I'd just be adding a layer of dirt to be washed away in the winter. Any advice or resources to learn from would be appreciated. I'm not looking to have a perfect road, but something that someone could drive a civic down without panicking (people panic too easy) would be great.
IMG_3744.jpg
IMG_3750.jpg

posted 2 years ago
Do you have a "pit" where you can get sand and gravel from your land?

I have such a pit and a backhoe. I take a front end load and dump it where I want to improve the road. Then while facing the pile I lower the bucket on top of the pile and lift the front wheels off of the ground. Put her in reverse and drag the pile. Over and over again until the pile is spread to the depth I like and it is smooth.

posted 2 years ago
As a road builder, what you have looks good anyway.
I assume people want to travel at 40mph over that road, which would be difficult.
I think the best thing would be to spread smaller rock over what you call the bad things, and keep the speed down by keeping rough bits in the road.
Maybe remove the larger rocks to the side.
The main thing with roads is to stop water running down or across them, otherwise they get badly eroded.
Good luck anyway.

posted 2 years ago
You have a really great start. By the photo it looks like your road is already crowned and ditched and is shedding water without erosion. So you have a great base. To get a great surface you either have to remove the big rocks that are present, or cover them over. Picking rocks sucks, but it is far easier to remove something then add, and I think in your situation it would improve a lot of places. Where rock removal still is too rough, you will need to add gravel, and you want fairly small stuff. By the look of your soil you should have a gravel bank around there somewhere.

Here in Maine, our glaciers ran to the sea which was in a Southwest Direction, therefore gravel is always found on the East side of a hill since that is where piled up and was exposed as the glacier melted. The southwest side of a hill, that is where the glacier scoured away the soil to almost bedrock, so soil is thin there typically. So you will have to find which way the glaciers ran where you live, and check the opposite side of the hill.

Another place to check for gravel is near old cemeteries. Obviously don't dig near them too close, but back in the day when old graves had to be shoveled by hand, the old duffers went where the shoveling was easy and the soil depth was deep.

Check around for an old bank where the gravel for the original road was dug up from. Around here logging roads are built from soil found on site as gravel usually exists somewhere. It might have grown up into old bushes and trees, but you might be able to find some. If it is not on your land, you might be able to ask to use it. I let people use my gravel to fix up there roads all the time. When they built your road, I am pretty positive they did not haul gravel all that far.

As for the log trick. it does not work. I tried it a few months ago as I began building a new access road on my farm. It works well for smoothing fields because of the light fluffy soil, but on roads it just drags gravel, then "thump": it rolls over itself and end up leaving a VERY wavy surface. This was the reason I fabricated a grader blade for my log trailer...I needed a very flat surface for my road. It has to cut the high spots, and dump the gravel into the low spots to be effective. A log just does not "cut" as it has to on a road way. BTW: 3 point hitch mounted grader blades do not work either as when the tractor goes into a dip it drives the blade into the ground, and when they go over a hump, it lifts it off the ground. This leaves a VERY rough road surface.

Also, if you use regular soil, it will just slime up when the next rain comes making your road a terrible mess. It does not take much gravel to give a car grip and still shed water, but its gravel and not top soil.

You got a nice meandering road though that many people would die for. Nice property!! 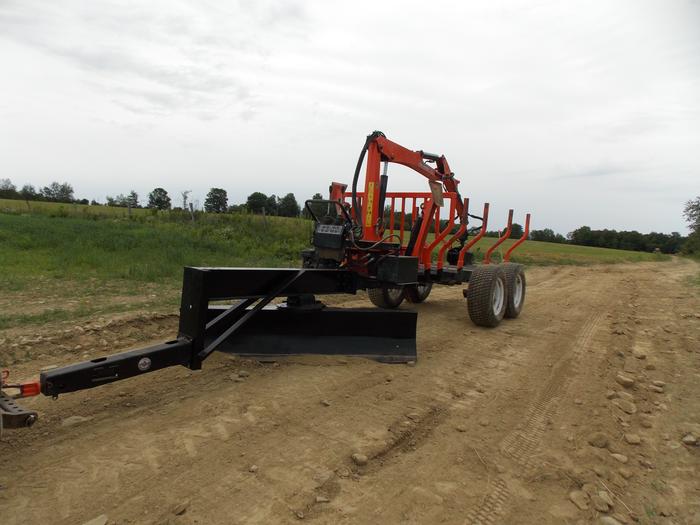 posted 2 years ago
Miles: Thanks! That's a useful description of how to compact it with the backhoe. I always underestimate the power of hydraulics, still getting used to this whole thing.


I assume people want to travel at 40mph over that road, which would be difficult.

I definitely don't let people do that, I have no interest in becoming a full-time road maintainer. I think the struggle is people see rocks, a few of them pointy, and assume their car can't make it. Personally, I've driven a Yaris down and up a few times without any issue. I know cars are a lot more capable than most think, but that doesn't stop people from assuming their car just can't make it.

Travis: Thanks for the input on the log idea. I've been skeptical of it since people mentioned it to me as a solution, as with the value of buying a grader / box scraper. I've used a box scraper previously, but that was on an already established gravel road with no boulders. I've struggled to see how any of these implements would work well on my hilly, rocky terrain.

What would y'all consider "big rocks" (to remove) and "small rocks" (to fill)? I think this is my main point of confusion. I suspect maybe almost all the rocks are "big". I'll look around for more gravel. To my knowledge, there's only one place with a large deposit of gravel and it's unfortunately across the creek. Doable, yes, just not easy. Aside from that I've mostly found gravel in the creek bed itself. I guess I shudder at the idea of just how much gravel it would take to improve the road, but I also wasn't thinking that the gravel came from glaciers, so I may be underestimating how much gravel exists in the property.

posted 2 years ago
I'd say that in the "good" picture there aren't any "big" rocks to remove.  In the "bad" picture I'd take out the 10 biggest rocks that we can see there.  Anything smaller should be fine in my opinion.  I'd pay particular attention to rocks down the center that can hit the oil pan or muffler.

posted 2 years ago
seeing you have about a mile of road, my first option would be to hook up a trailer, travel the road and pickup any loose big rock [size of your palm or bigger ].
That way you can use those rocks elsewhere.
Them I would watch the way people drive on it.
Bear in mind, people will usually travel as fast as they can.
I maintained a road near my place about 5 miles long, until a car rally used it as a course and destroyed it.
I called the council and had a big moan, they took over maintenance after that.


Travis Johnson wrote:. Where rock removal still is too rough, you will need to add gravel, and you want fairly small stuff.

When the rocks are huge, you have ONLY two options - dig them out, or bury them.

It's usually easier to bury with rocks, gravel or base.

If bringing base in is expensive, then do the best you can with what you have now.
Build a rock sieve and keep everything golf-ball sized and smaller. Chain link fence work for this.

Save the purchase of road base until after you've done all you can.

Look into getting box blade for the 3-pt hitch on your loader tractor.