Doing a quick search on this forum indicates a general positive attitude towards raw milk.

CDC researchers reported a spike in outbreaks from raw milk in 2015. Between 2007 and 2012, raw milk outbreaks of C. jejuni doubled, for instance. And comparing average annual outbreaks linked to raw milk in the periods of 1993 to 2006 and 2007 to 2012, researchers noted a four-fold jump.

posted 3 years ago
To me, this article is more of the same "be afraid!" news headlines. I'm not about to say that raw milk doesn't make people sick, it does happen, but I think the severity of this is way overblown. I think this is just another example of industry pushing propaganda. I read the article, and nowhere did it mention any deaths. People get sick from food everyday, and nobody is up-in-arms about about the deaths related to food-borne illnesses. Why is raw milk singled out to be the bad guy? Here's a little chart from the World Health Organization: 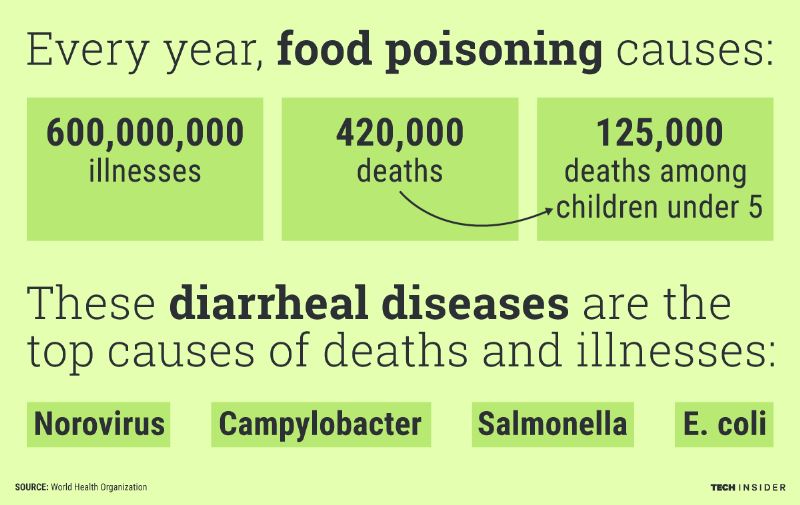 My wife and I have been consuming raw milk for over 5 years now, without any problems. We get our milk from a local farm from a lady who raises three Jersey's on pasture using rotational grazing methods, complete with chickens following the cows. She uses common sense and smart sanitizing in her milking and packaging techniques. I tend to think that all this bad news about raw milk has some of the public almost believing that the milk is becoming infected inside the udder, and it comes out the teat already tainted. Raw milk contamination comes from poor handling.

Modern industrial dairy farms that are over crowded with too many cows that aren't on pasture most certainly need pasteurization. That kind of animal density harbors disease and raw milk from those kinds of "farms" will make people sick.

I hope I didn't come across as too stern in my text above. I fully believe raw milk is safe when handled properly, I'm living proof of that, and I will defend raw milk. It just saddens me to see so much propaganda and bad publicity for something so healthy and good for people, when so many other food-borne illnesses strike people down yet the "food industry" tends to turn a blind eye to those happenings.

With all due respect, your anecdotal experience cannot change statistical evidence. From the article, raw milk is directly linked to a 150-fold increase in documented illness.


James Freyr wrote:I think this is just another example of industry pushing propaganda.


I think this is just another example of public health organisations trying to educate the public about avoidable illness.
Wes Hunter
pollinator
Posts: 526
Location: Missouri Ozarks
76
posted 3 years ago
It's worth noting that not all raw milk is created equal.  There's a substantial difference in purchasing milk from a one- or two-cow dairy and in filling jars from the bulk tank of a 200-cow dairy.

I find the last paragraph to be potentially misleading:


To highlight the dangers of raw milk, CDC researchers calculated the relative risk of outbreaks of raw milk versus pasteurized milk in 2015. Based on production data and consumer surveys, the researchers estimated that Americans consumed about 2.7 trillion pounds of milk between 1993 and 2006. Of that, Americans drank about one percent, or 27 billion pounds, raw. During that time frame, the 27 billion raw pounds were linked to 73 outbreaks while the remaining 2,673 billion pounds of pasteurized milk were linked to only 48 outbreaks. That works out to a 150-fold increased relative risk of outbreaks from raw milk over pasteurized milk.

"Outbreaks" is a very vague term.  How many people are in one "outbreak"?  How many states are involved in one "outbreak"?  Perhaps it's totally legitimate, after all, but it smacks of twisting data to make an illegitimate claim.  I have a hunch that the raw milk "outbreaks" each affected perhaps upwards of a few dozen people, by the very nature of the small farms which produce raw milk, whereas the pasteurized milk "outbreaks" likely each affected thousands, by the very nature of the enormous farms that produce pasteurized milk.  Of course, that's all conjecture, but it would be far from surprising.

posted 3 years ago
I’m not doubting raw milk can make people sick, it’s the villainizing of raw milk by the media that bothers me. I imagine 99% people who choose to drink raw milk are aware of the risks involved.
What I’m trying to get at is I think the media disproportionally publishes reports on isolated incidents of people who unfortunately got sick due to poor handling of raw milk. Public health organizations hardly ever publish information trying to educate the public about other avoidable illnesses such as the link of fast food/junk food and obesity. Obesity is the second preventable cause of death in America, second to tobacco. I think they shy away from publishing such information and don’t dare villainize fast food because the fast food industry is too big, too wealthy, and has too much influence. But when a small independent farmer, who made a mistake or had a lapse in sanitation and unfortunately made some good people ill, the media jumps on it. In fairness to the article it did mention the statistic of 48 infectious outbreaks caused by pasteurized milk during the same time span as the recorded 73 outbreaks linked to raw milk, so pasteurized milk isn’t guaranteed safe either.


Also, the article is more than a little deceptive with their 150-fold increase in documented illnesses number. The article uses clever math and inserts the word relative to say “150-fold increased relative risk of outbreaks from raw milk over pasteurized milk”. By the numbers, 73 outbreaks compared to 48 outbreaks is an increase of 1.52x or 152% not 150x. So what they did is they multiplied 27 billion lbs by 99 to get the same 2,673 billion pounds as pasteurized, that would mean a correlating 7227 theoretical raw milk outbreaks, which is a 150-fold increase compared to the pasteurized 48 outbreaks. That’s pretty sneaky if you ask me and not really relative to the reality of anything in my opinion. The authors are trying to make it sound far much worse than it really is.

posted 3 years ago
The "study" was amongst 91 persons… getting milk from the same source. This means it has no statistical relevance (reason: correlated data).
John Weiland
pollinator
Posts: 1719
Location: RRV of da Nort
322
posted 3 years ago
Just adding this as a bit of a complement to the original article:  http://www.campylobacterblog.com/campylobacter-information/raw-milk-and-campylobacter-do-not-mix/

David Livingston
pollinator
Posts: 4328
Location: Anjou ,France
243
posted 3 years ago
I live in France where raw milk is available all over the place at every supermarket . Cheese made with raw milk is regarded as a national asset .
This report seems to me flawed in that it is a future prodiction that never happened .
I look forward to eating riz au lait tomorrow with confidence as I did before I read such propaganda.
You guys have no idea how much us Europeans laugh that the USA bans raw milk and kinder eggs yet allows guns .

David Livingston wrote:I live in France where raw milk is available all over the place at every supermarket . Cheese made with raw milk is regarded as a national asset .
This report seems to me flawed in that it is a future prodiction that never happened .
I look forward to eating riz au lait tomorrow with confidence as I did before I read such propaganda.
You guys have no idea how much us Europeans laugh that the USA bans raw milk and kinder eggs yet allows guns .

A lot of us would laugh too, but it's just too sad.  My wife keeps telling me we need to move.  She's probably right, but we do have a lot of roots here.

Wes Hunter
pollinator
Posts: 526
Location: Missouri Ozarks
76
posted 3 years ago
Regarding the excerpt I quoted above, I'm curious if the researchers only looked at fluid milk consumption.  Since nearly all cheeses, ice creams, yogurts, and other value-added items use pasteurized milk, any outbreak arising from those products (at least, those attributable to the milk itself) ought also to be included, it seems.

Also, if we're going to warn people on Permies, who have a "general positive attitude towards raw milk," we might also warn them against other things they have such a positive attitude about, such as spinach, and lettuce, and cantaloupe, and beef, and chicken, and eggs, and so on, which have also been found to cause outbreaks of illness-causing bugs of all sorts.
Genevieve Higgs
pollinator
Posts: 117
22
posted 3 years ago
Sure, milk can get tainted post-udder.  It is a nutrient dense medium that nourishes nasties just as much as it nourishes mammals.  BUT it can also carry things like brucelosis, rabies, tick bourne encephalitis, campylobacter and salmonella from infected cow to person.  And if you get dairies pooling milk together and sending it out, one cow's milk can end up in a lot of people's mouths.

So there is a justified level of concern for scrutinizing milk.  Whether that means knowing your farmer, milk boards inspecting each farm a regular basis, cold filtration or pasteurization might be questions of scale and economy.  Personally I play it safe and drink pasteurized, but that also applies to seatbelts, guns and eating my greens.