Free Stuff - Look at what I got today.

The colour fades as it dries, but it can still look pretty nice. Unfortunately I haven't met any woodturners willing to pay for product or to take less than 10 minutes selecting a block.😕 I'd gladly give them one if the'd just hurry it up.

One piece was given to a neighbour, who claims he's going to do something with it.

Dale Hodgins
Posts: 9002
Location: Victoria British Columbia-Canada
697
posted 2 years ago
I'm at Starbucks. Somebody left the fridge open and because of that they had to throw out a whole bunch of perfectly good stuff. It was only left open for a little while and it's not meat. Mostly bagels and brownies and cookies. The girl who discovered it packed them in very clean bags, then she put them in a separate part of the dumpster, with  newspaper under it.

After everything was safely tucked into the garbage bin according to regulations , the employee came and told Kim, a lady who often distributes food to people. Kim often takes all of the leftovers when they close and distributes them to homeless people downtown. She explained the situation, said that she was going on break and told Kim not to go into the garbage bin, which meant, don't let me see you go in. She didn't. Her friend Paul is much younger and more agile, so he went in and passed it out to her.

This stuff is still nice and fresh. I'm taking bagels to my friend's house tomorrow morning.

Kim, Paul and the nameless girl who works behind the counter at Starbucks , all did the sensible thing tonight. Free pastries for anyone who wants one. They departed about 5 minutes ago and I'm sure people will be eating that stuff within a few minutes. The brownies are awesome.
Pearl Sutton
steward & bricolagier

posted 2 years ago
The neighbor wanted these to go away. Cool, I can do that!
They haven't been cleaned up or anything. Metal, heavy beasties. The light bulb socket is one size up from standard, I'll rewire them (would be rewiring them for safety anyway.) Thinking they may end up cobalt blue gloss, and high up in our new home, bouncing light off the ceiling. 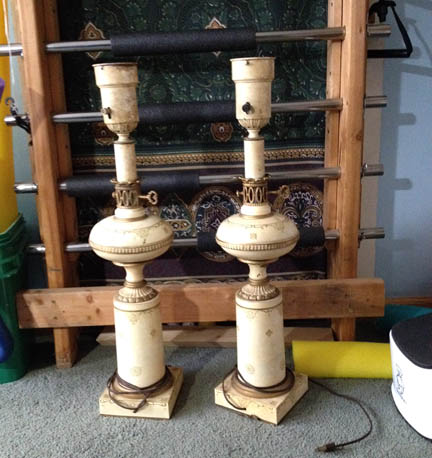 posted 2 years ago
@ Pearl - A light weight floor lamp which I use all the time needed a new light socket after 20 years or so of rugged use. Hubby wanted me to come with him to the hardware store to express my opinion on the quality and switch mechanism of whatever he bought to fix it. I saw one with ball chain and said "that one". He looked at me as if I'd grown an extra head, but I explained that with the chain hanging down, I could easily see what I needed to get the light to come on. I didn't care that it was a little non-traditional. It was a "brass" colour and the lamp has a tiny bit of similarly coloured trim along with wood, so it would look just fine on the lamp itself. As a bonus, I no longer have to worry about "screwing up" and unscrewing the twirly on switch by accidentally going the wrong direction!

Hubby says your lights might have a "Mogul base" (The bulb socket in the center has a larger diameter (an E39 or E40 mogul base) than a regular E26 or E27 Edison screw light socket, and is typically made of cast porcelain for the higher temperatures. Wikipedia) It is possible to get an Edison adapter that screws into the socket if the mechanical aspects of replacing the socket end up being a problem, but he agrees that if the wiring look old, replacing it  with new is a good idea as the vinyl they cover wires with has a definite shelf-life.

Jay Angler wrote:
Hubby says your lights might have a "Mogul base" (The bulb socket in the center has a larger diameter (an E39 or E40 mogul base) than a regular E26 or E27 Edison screw light socket, and is typically made of cast porcelain for the higher temperatures. Wikipedia) It is possible to get an Edison adapter that screws into the socket if the mechanical aspects of replacing the socket end up being a problem, but he agrees that if the wiring look old, replacing it  with new is a good idea as the vinyl they cover wires with has a definite shelf-life.


Yup, that they do, I had to look, I had noticed the socket size, but he's right, it does have porcelain. I'd be running LED bulbs in them, so I won't worry about the heat. But am planning to rewire them, where I want to put them, they need to be safe.  I love old lamps, especially brass ones, and rewire them mercilessly. I don't like metal lamps arcing on bad wiring. No no no!!

john mcginnis
Posts: 311
49
2
posted 2 years ago
Wife and I do a bit of scavenging when the mood strikes, but we favor cruising the estate sales too.

We have had a clothes dryer that I have repaired multiple times. Replaced switches, heat sensors, etc. Well the motor finally gave out. Price of a replacement motor was out of the question. But spending the money for a new unit was certainly out too. (actually shocking, $400 and up at a big box store)  So we cruised some of the estate sales one Saturday and picked up a gently used one for $200. That recycled our budget.

Many of these estates have 75-90% on a Sunday when they are trying to empty out a home. Have from time to time turned a small profit reselling at a garage sale. We treat ourselves with a dinner out with the proceeds.
Dale Hodgins
Posts: 9002
Location: Victoria British Columbia-Canada
697
posted 2 years ago
I've been mostly on the giving end lately so, since I have found quite a bit of stuff that I don't really need need. Gave away a huge amount of 7 ft 2 x 4 and 2 x 6 this week. I had to strip out a basement apartment that was only 7 years old. One guy took most of the plugs and switches. Two friends have picked up big loads of firewood from the unit but also from the yard where trees have been cut..

There is often a gap in the work schedule around Christmas time. So I will run one of my Free Stuff ads, where I tell people that I'm willing to pick up unwanted things. I don't run around picking up stray cups and saucers. But I will go and look at a whole basement or shedfull of stuff that someone wants gone.

I set a new personal record this month, in that approximately 130 tons of building materials will not be going to the dump because of my efforts. I was called to look at three houses for Demolition and made a deal to get two of the houses moved. They are both high quality, so now they will go to one of the gulf Islands or as secondary houses on farms. The salvaged material mentioned earlier came from the basement of one of them. I've scrounged many things out of the big ugly one that can't be moved. I will be living in the nicest one until mid January. I live at my job , so it's nice to find a really good house this time of year.
20191128_103930.jpg
20191128_104024.jpg
Dale Hodgins
Posts: 9002
Location: Victoria British Columbia-Canada
697
posted 2 years ago
These ceramic pieces were laying on the ground almost covered with leaves. Both appear to have fallen from a tree, amongst the rocks, but neither one are damaged. Both had chains so rusty that I broke them with my hand.

They appear to be hand-built and not slip molded. Probably a mass production item, but I like them.

posted 1 year ago
Am I the only one who wants to be Dale when I grow up?

.
Seriously, looking over this and other threads, I previously thought I was a pretty good scrounge but now feel like an amateur!

I did get 40 scarred and chipped old bricks yesterday so that's something. The garden beds get another 6 feet or so. It takes about 6 bricks for one linear foot of retaining wall for the beds.

On another note, I hurt myself a while back trying to muscle brick loads using nothing but my arms and hurrying to do it. For Christmas I got two sets of brick tongs. I used them for the first time yesterday. WHAT A DIFFERENCE!!! If a lot of brick moving is on your plate, get brick tongs. I added some grippy rubber bicycle grip handles to mine. Mine are now riding in my trunk with appropriate tarps in case I pass by an opportunity to scavenge more brick.

BTW, for large limestone foundation block...I scavenged some at the last bigger brick haul I had. I got as large as I could carry by hand across uneven lots and get into and out of the car. It would have been great to get larger blocks. Are there tongs or other contraptions that might help with that? Keep in mind I have a smallish car so getting things back out could be an issue as well.

"Si hortum in bibliotheca habes, nihil deerit." [If you have a garden and a library, you have everything you need] Marcus Tullius Cicero in Ad Familiares IX, 4, to Varro.

Dale Hodgins wrote:My brother came upon this yesterday and he called me. It is a commercial cooker, probably for soup or pastries. It had a steam line that heats the food without burning it. It holds about 15 gallons of liquid. When you want to pour it out you turn the crank and it moves very smoothly. I may never use the steam heating function, but I'm going to use this for something, probably soap making. But if I have 200 people over for soup, it may be used for that. It's unfortunate that it's here in Canada. I could really use this thing in the Philippines, where all of the ingredients for soap making are so much cheaper and labor is $7 a day. But I'll figure something out.

"Si hortum in bibliotheca habes, nihil deerit." [If you have a garden and a library, you have everything you need] Marcus Tullius Cicero in Ad Familiares IX, 4, to Varro.