Michael Bushman
Posts: 144
Location: Sacramento, CA
8
posted 5 years ago
Hollow door built of marine grade plywood is going to last as long as a solid wood door but be VASTLY lighter.   Simple torsion box construction will make it solid, stuff it with whatever insulation and then lay on the other side and voila, thick, solid feeling door that weighs a LOT less than solid wood.

Its not just hinges that need to be stout, the leverage on the wall or post that those hinges are mounted to is a lot with a 6+ foot wide door, think what you can do with a 6' lever and your weight, imagine what a 1/2 ton (say a solid oak door) can do?

Funny I saw this thread as I have been thinking about a round door for my olive tree, its massive and overgrown, the branches reach the ground in what must be a 30' diameter circle and its a wonderful open dark space underneath and I have been thinking about adding a door to get under its leaves.   I don't need to insulate so I am going to make the door with false hinges and have it pivot at the 1/3 mark, might even counterbalance it so there is little if any stress on the frame.

posted 5 years ago
Kirsten Dirksen did a video of an awesome hobbit hole in Washington State, owned by Kristie Wolfe.  Lots of not permie construction tech but it could be modified to be more permie. Paul may have to take a trip over there and see how the door works.

And she rents it out.

posted 4 years ago
The above door appears to be a re use of the end of a cable spool. They are constructed by nailing the boards to each other at 90 degrees to each other on opposite sides. The grooved circle on the inside of the door is where the boards that made the core of the spool were inset. If both ends of the spool were used with insulation in between with a hinge as I described before that pivots on the center of the door and latches  with a cam bolt through the center pivot so that when you turn the center knob a weat is lifted ub out of sill on the bottom of the door and pin pulls down out the lentil at the top  of the door then the door could be pulled out of the wall and pivoted on the center of the door and the door post so that it can swing to the side with the outside of the door facing you.
The Door post and center pivot on the inside of the door are made of steal pipe that the hinge pipe can rotate around. The hinge Then is a square of pipe that has the open ends vertical so that they can rotate around the door post and center pivot with the same pipe above and below to hold the hinge at the right height on the post and the center pivot to the door.

I think it would be visually interesting to be able to turn the center knob and pop the door out of the wall like pulling a stopper out of a bottle.and then swing it aside. When the door is closed no hinge is visible on the outside and if the center knob can be removed as a key it makes it very difficult to break into.

Rob Mercer
Posts: 1
posted 3 years ago
One idea I've heard of is to use metal 2x4 framing filled with rigid insulation for the core.  Then you layer thin strips of wood on the outer edges.  After that you put 1/4 inch plywood on both sides, then paint it to look like wood planks.  This makes a very light door with better insulating qualities than a solid door.  I would use a knob in the middle and levers similar to ones from a manusl garage door opener.
Sky Huddleston
Posts: 100
Location: Missouri
15
I like... 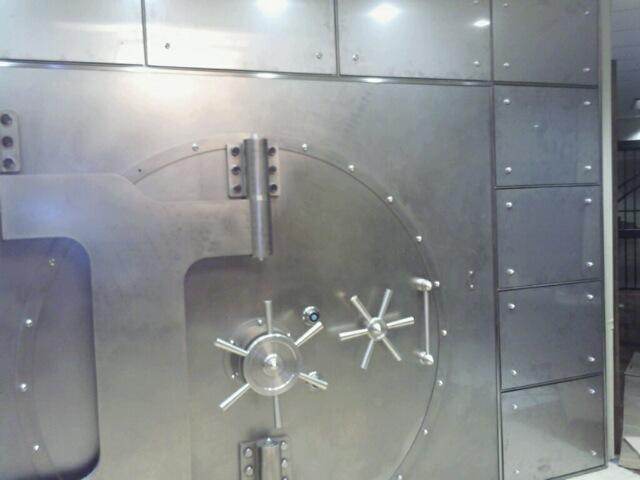 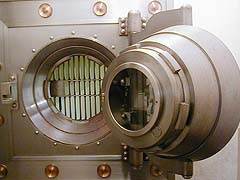 I want you to notice how on all these large round doors there are actually two sets of hinges. One is the hinge the door swings on, and the door is actually mounted to the swinging hinges in the center by another pair of hinges. This ensures that the door always closes with its face parallel to the mating surface. This is the door I made to a charcoal kiln about 5 years ago. Its made entirely out of 1/8" steel plate with 1/4" reinforcing gussets and is 6" thick, with a poured castable refractory interior.

For what Paul is going for, here's what I'm thinking. A laminated pressure treated plywood core, with planks for the interior and exterior faces. Then a large 1/4" steel hoop thats rolled and welded on the ends. The hoop would be slightly smaller in diameter than the door itself, then heated in a bon-fire to expand the hoop. Then the hoop would be sledge hammered on to the door whilst red hot like a wagon wheel. From there the hinges and structural elements can all be welded to the steel hoop. The steel hoop would run the entire depth of the door from inside to outside. Inward swinging concealed hinges would be welded to plates that are welded to the hoop and lag bolted to the interior of the door. We could have the door open to the side like in the film, or alternatively, we could have it open from bottom to top with a hydraulic or spring actuated ram. In the later arrangement, the hinges would be at the top and the door would swing from the bottom up, this would reduce the amount of interior space used in the clearance for opening. The central knob would be used to activate the hydraulic valve that opens the door. However, for the aesthetic Paul is going here it would be most prudent in my opinion to keep it simple with a regular side swinging door, as its more akin to the original film depiction, and once hydraulics start getting involved it becomes a lot less hobbit and morphs into a lot more like a warhammer 40k/starship troopers/bioshock aesthetic, which as far as I can tell (and correct me if I'm wrong) is definitely NOT what we are going for here.

So now that I have rightfully shot down my hydraulics suggestion, on to the brass tax. I might suggest using the center knob as a sort of locking latch, that is twisted to unlock the door. I recommend 507 mechanical movements for inspiration.
http://507movements.com/

The door would be supported by a concealed welded square/rectilinear steel and oak beam frame.

posted 4 months ago
Didn't real the full thread, sorry...  I'm assuming we aren't using any plywood, styrofoam or glue on the door.  And Paul wants it round and opening inward...

If rockwool insulation is permitted, the door would be a lot lighter if it consisted of two wood layers with a 3" layer of rockwool between them.  If that isn't ok then it has to be solid wood and it'll be heavier.

Having enough structure in the wall to support the door is very important.

For windows, I'd suggest a single half circle window on the top half.  Then the doorknob can still be centered and the windows are likely available by dismantling a cheap door from the Habitat Restore.

For the hinge I like Paul's sketch on the first page, adjusted a bit below.  It would be a shame to have a cool hobbit door with a welded flat hinge on it.  I think a little bit of blacksmithing or at least advanced metal fabrication would be in order.

On the right side of the picture is my imagined cross section of the door closing against the wall.   No need to worry about the door expanding and contracting if it just presses against a smooth surface.  Have a 2-3" area for the door to close and press against.  Put felt weatherstripping on it and you're done.  The longer the hinge is, the more in the way the door will be.  But the easier it is to get the door to seal on the hinge side.

Opening outward would save a bunch of space.  And it could be done.  Just have the door inset into a 3" larger round hole in the wall.  On the inside of that hole have a lip that the door closes tight against.  Make a hinge on the outside that jogs around the thickness of the wall to its hinge point.  Voila.  The door is inside the wall so it will look flush and tucked away and subtle.

For that matter, an inward opening door could seat against a lip that's in the middle of the wall's depth.  Then it would look a bit better from the outside (less recessed).
Hobbit-door.png 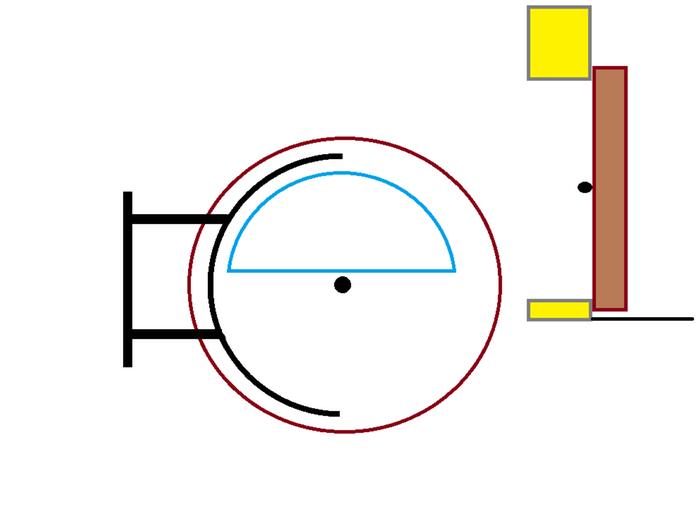