posted 2 years ago
Thank you for that explanation Jay. We were blessed with a little rain yesterday. I've been rearranging rocks and flagstone in the area where we had our veggie garden for fifteen years. If my health holds I will continue playing around with permaculture  designs to try and hold rain water when we get it like yesterday. I can't wait to get outside and see if the swales I created for our Currents got enough rain to catch runoff. I hope I hope! One of my favorite things to do when it rains is go out and see where runoff goes and move it to where I want it to go if possible. Nothing like playing in the puddles to make a person feels like a kid again!
Brian

I still don't understand all I know about this.

Ash Johnson
Posts: 8
posted 2 years ago
Thank you all so much for the information here on keyhole gardening. I had never heard of this concept before and it has completely changed the plans I had started to develop for our small suburban plot. I'm going to put keyhole garden beds everywhere!

One thing I'd like to ask though is how this would go on top of sand? This land was formerly covered with coastal scrub, and all of the topsoil in the areas I'll be gardening was cleared to make way for the build. Would I need to alter the process at all to work with a sandy base? The drainage will be extremely good but I'm worried that this will result in water and nutrients leaching out of the beds sooner.

Thanks for your help.
Inge Leonora-den Ouden
pollinator
Posts: 1804
Location: Meppel (Drenthe, the Netherlands)
559
I like...

Ash Dalton wrote:... One thing I'd like to ask though is how this would go on top of sand? ...  Would I need to alter the process at all to work with a sandy base? The drainage will be extremely good but I'm worried that this will result in water and nutrients leaching out of the beds sooner.
Thanks for your help.


Probably this will work on top of sand. Just add a thick enough layer of topsoil / compost, and wood, branches, etc. on the sand. Maybe some of your plants will stretch their roots to, and even in, the sand. So slowly they'll ameliorate your soil!
My garden has a very sandy base too. And I even build 'hugelkultur'-beds on top of pavement!

Terri Matthews
Posts: 529
Location: Eastern Kansas
24
posted 2 years ago
My soil is clay, not sand, but because we are in a drought the ability to hold water was vital this year to reduce the need for constant watering. The soil that held water the best was about 50% soil and 50% weeds: where the weeds were badly mixed with the soil the weeds got soggy enough to make problems with the roots of the plants.

If rotting weeds hold water that well, perhaps they could hold water in your sandy soil as well. But, you might try mixing them in better instead of just dropping them in the way that I sometimes did. I had no problems with the parts that were better mixed in with the soil
r ranson
master steward & author

I'm watering it with about a litre of water in the centre bin about twice a week.  Most of the plants there are started as transplants, so they got a bit of water when they went in.

Not bad results for so little water.
IMG_3065.JPG

Andy Parker
Posts: 13
4
posted 2 years ago
Just looking at the weaving has me on-board I have to do at least one of those.
Jay Angler
gardener

posted 1 year ago
At the moment, our issue is not summer drought, but unusually cold temperatures and snow for ~4 weeks now. There is still snow in the north shadow of my ARK2 bed, but despite that, there are still some things alive and growing!
ARK2-2019-purple-sprouting-brocoli.JPG
ARK2-unidentified-volunteer-2019.JPG

posted 10 months ago
I'm leaning towards small perennials for this garden with the theory that they have deeper roots.  To that end, I planted strawberries.

But they needed water, so I took my dye adventures outside and let the wool drip dry above the transplants. 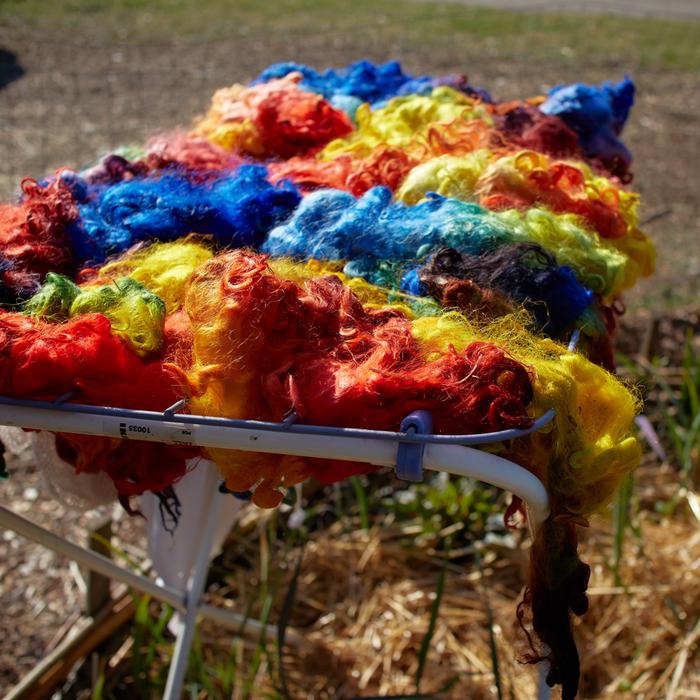 r ranson wrote:I'm leaning towards small perennials for this garden with the theory that they have deeper roots.  To that end, I planted strawberries.

But they needed water, so I took my dye adventures outside and let the wool drip dry above the transplants.

I was thinking something similar for my keyhole, regarding the perennials, such as a perennial herb garden with some annuals like basil thrown in. I didn't think about strawberries, but could definitely see that working well... Especially if you live in a climate where they really thrive & need to be contained.
Looking forward to the future updates!

posted 9 months ago
My ARK2 bed has been overgrown with last year's leaf cabbage and kale which I've been gradually cutting back and feeding to the ducks. I like to let some of it bloom for the bees, who have been visiting. I had some mouse visitors who were digging tunnels, but I think I've managed to relocate them. When checking things earlier this week, I discovered there were potatoes growing. Huh? I have *no* recollection of tossing some little potatoes in, but they're too evenly spaced to be accidental! Since I've already had to plant some extra tomatoes on the south side, I'm not sure I won't have to chop the taters down eventually, but for now I needed to top up the soil in that area so I did so around the new growth this evening. I was planning to plant bush beans this year, so we'll see how things progress. The "compost" side of things is improving - I can actually see areas where there's soil-like stuff, some of which I dug out and used to fill in a gap in the bed itself. I think the bed itself would work better if I had some animals in the area so I had an excuse to dump their soiled water-bucket into the center compost. That may happen, but would require some fencing and a gate and I'm not convinced I'll get that far.
ARK2-Apr-2020-new-tomato-plants.jpg 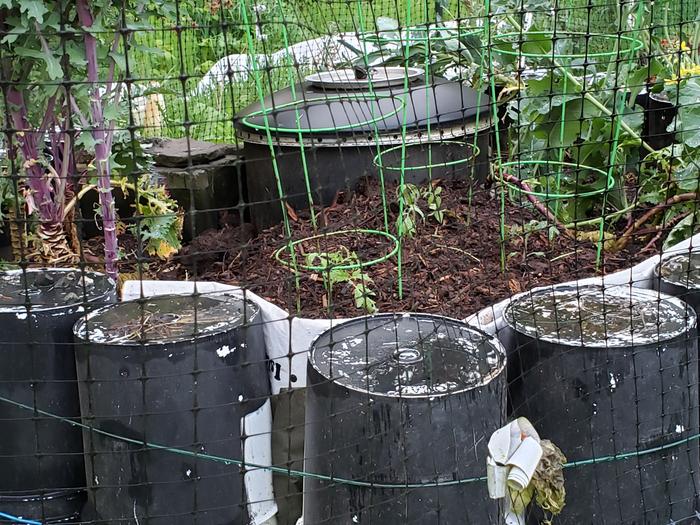