Ecosystem restoration projects in US

After listening to an interview with John D. Liu and subsequently reading through his entire Ecosystem Restoration Camps website, I'm dying to know if there are similar projects happening in the US. Googling around wasn't very effective, and I'd rather take the more grassroots route of talking with y'all. I see a wide spectrum here of potential projects, from your standard degraded piece of land someone is homesteading on and revitalizing with regenerative ag to massive projects on the scale of John D. Liu's work in Altiplano and the Loess Plateau. I'm open to all of them, but am most intrigued by the latter half at present (larger scale projects restoring heavily damaged landscapes).


More about what I'm looking for:

- In the US, bonus if it's in the northeast
- Don't have to pay hundreds of dollars to work there, more of a work-trade scenario
- I'll be learning A LOT while I'm there, hopefully enough to help seed my own restoration project elsewhere one day


Who I am and what I have to offer:

- late 20's, strong, able-bodied, kind human with excellent communication skills, currently living in western Massachusetts
- I am SO READY to learn and do the relentless, ass-kicking, humbling, joyous work of restoring the earth!
- Environmental science degree, PDC, a few different WWOOF stints, lots of gardening experience, some permie design and carpentry experience
- Could stay for months if it's a good fit
- I haven't camped in rustic conditions for more than a few weeks, but I think I could get used to it


So, do you know of any restoration projects in the US that fit what I'm looking for? I'm open to hearing about smaller scale, permaculture homesteading projects if you feel called to share, although I know there are countless ones to choose from on here, wwoof, workaway, etc.


Thank you so much!
Mike Haasl
steward

posted 2 years ago
I'm not sure if this is exactly what you're after but maybe it is.  Their site is a clear cut forest that has been recovering for 13 years.  But it's not on your side of the country... Off-Grid summer program

You are right that a google search for restoration projects is not that helpful - most groups that are doing restoration in my experience don't have a massive online footprint. I work for a non-profit that is part of a nationwide community of Land Trusts. Land Trusts are non-profits that conserve land by owning the land outright or by using conservation easements. While all land trusts are involved in some sort of land conservation not all engage in restoration.

The ones that do restoration projects will have a mix of small or large projects. I run a 4 county restoration program in Washington State with projects that are small volunteer driven to projects that have a budget of several hundred thousand dollars and are mostly completed by hiring contractors.

One great way to get involved in groups doing restoration work is to volunteer with them. Once you have a foot in the door you might be able to get a paid position. I started as an un-paid intern and moved to a paid temp employee, then a coordinator, then a manager, and now I'm about 9 months into a new manager position (I now run the restoration program and public access program for the land trust I work for). January will be 4 years with this land trust.

Another option is to look into AmeriCorps positions - I hire an AmeriCorps member every year to help with our restoration/stewardship work. Lots of other groups hire AmeriCorps members and while they pay is very low it is a great way to get experience.

If you are interested in finding land trusts to volunteer or even potentially work for I would check out the Land Trust Alliance's Find a Land Trust site.

Another option you might want to consider is Paul Wheaton's Permaculture Boot Camp program. Paul is the founder and owner of this site and runs Wheaton Labs in Montana. The Boot Camp program is not for everyone but it is a good way to get a crash course in permaculture as long as you are willing to work hard and follow the rules of the site. You can read more about at the above link and in this thread.

Hope that helps and good luck!

Danielle Eernisse
Posts: 7
posted 2 years ago
Thank you so much, Mike and Daron! Especially you, Daron - that was incredibly helpful! I think I'm going to take the next warm season to get some plain old organic farming experience under my belt, see if I can connect with any local land trust restoration projects, and think about whether permie boot camp calls me come fall. We'll see!

Danielle Eernisse
Posts: 7
posted 1 year ago
Bumping this to say that I'm still searching for a restoration project to support and learn from, and I'm open to any location. I would prefer a situation with structure, team collaboration, and plenty of opportunities to learn about the process of restoring damaged landscapes.

posted 1 year ago
Not sure if Perric needs some help or not in Colorado ?

I've watched the same video by John Lui and it was quite inspiring.  I've felt the same hankering to get something going here in the US.  It is a large factor in why I started a website project so that local groups trying to get projects like this going in local areas could connect with people in the community that want to start doing things to help the environment.  The project has taken about 6 months to create and now are empty vessels waiting for people to fill them.  It is a site that has pages for green events, groups, non-profits, project needs/offers, green businesses, local advice, and local article links.  I would really love it if when you find projects going on wherever you end up, that you take a few minutes and add it to the site, so other people can learn about it and get involved.

On this site under the page "What We Do"  "Create a New Green Action Group" you'll find this:

Soil Building from the Ground UP - Regenerative Earth Groups

This type of group can gather resources together to create beneficial microbially-active compost.  The compost can be used to create new gardens or be used to create compost tea which can be injected into soils of existing gardens with heavily degraded soils.  Community events can help educate the public as well as giving people material lists to do it on their own.  The mission is using microbial life in the soil to create carbon sinks, enhance moisture-retention, and build up greater productivity in gardens and farms.  This type of group might also work on getting businesses, local government, farms and municipal waste facilities to sign on and support these projects as well.

The purpose of starting gogreenlocally.org was to put a lot of thought, time, energy and money into promoting this and thereby am promoting every project, business, group, article etc. that is attached to it.  It seemed like the way to hopefully get something cooperatively going to help find more solutions locally to improving the environment.

Anyway, thanks for the effort that you are making to get involved in earth restoration.  We all really appreciate it!

Leaf Bailey
Posts: 17
Location: Southern Oregon
1
posted 11 months ago
Hi Danielle,
How’s your search gone? Were you able to find a project to get involved with? Are you looking for something this year? Give us an update.
I’ve got a forest restoration project I’ve been working on in Southern Oregon, just outside of Ashland. It’s a beautiful location with an amazing amount of diversity. There are at least 8 different species of native trees on the property as well as an endless array of edible/medicinal plants and wildflowers.
The forest was logged probably 40-60 years ago and since then has gone pretty much uncared for. This has resulted in an unhealthy density. Instead of trees being able to thrive in their own space, they’re overcrowded and competing for resources this results in a lot of broken and misshapen trees, or situations where the conifers have pieced the canopy of the shade intolerant oaks, killing off limbs, and in many cases, whole trees. While the conifers are great as a marketable resource, the presence of the oak, and diversity in general, are key factors in supporting the teaming wildlife communities. Aside from poor forest health, this overcrowding also makes the forest inaccessible to us humans to enjoy. Instead of being able to go out for a hike (or easily manage the land), one must bushwhack through the understory, literally,  unable to see the forest through the trees. As you can imagine, this also make for an extremely volatile situation when fires come through, which are an ever growing threat out here in the west.
There are also a few springs and riparian zones that we’ll spend some time addressing in a way that slows the flow and keeps the water on the land, and recharging the groundwater, as much as possible.
We are trying to take a wholistic approach to this process, honoring the plants, animal, and land as we go. Instead of piling and burning the slash, we are chipping where we can and laying the fallen logs on contour in order to basically make swales, again keeping the carbon and water on the property, not putting it in the air or enabling mass run off and soil degradation. We’re also building wildlife habitat with some of the debris. Where it’s not possible to get the chipper, or plausible to drag it out, we are doing some minimal burning.
If this sounds like something you might be interested in checking out and helping with, I would welcome a discussion about specifics. The property is pretty wild and “off-grid”. There is a solar generator on site and amazing spring water to drink. A shared propane shower and composting toilet. There are a couple of domes available for Living or sites to park your bus,van, or tiny home. There’s a veggie garden site available to grow some food but our growing season is pretty short.  Work would primarily consist of hauling and piling limbs and log sections. You would definitely have direction and help. Some time would also be spent on creating and maintaining some infrastructure to improve yours and others’ time on the property. Running water and kitchen access come to mind. Here are some photos of what it looks like after the work is done. 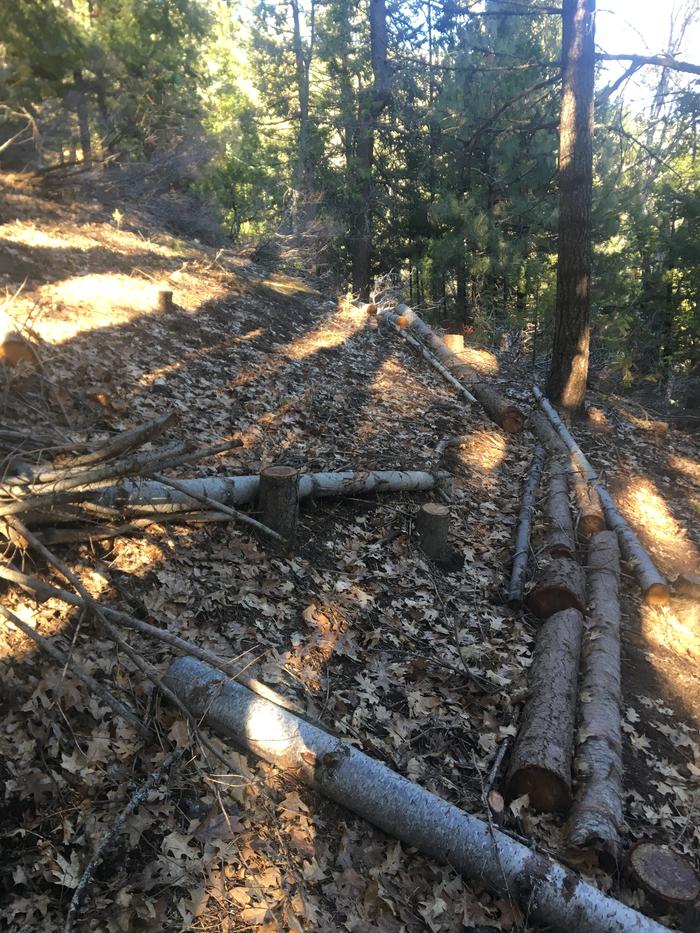 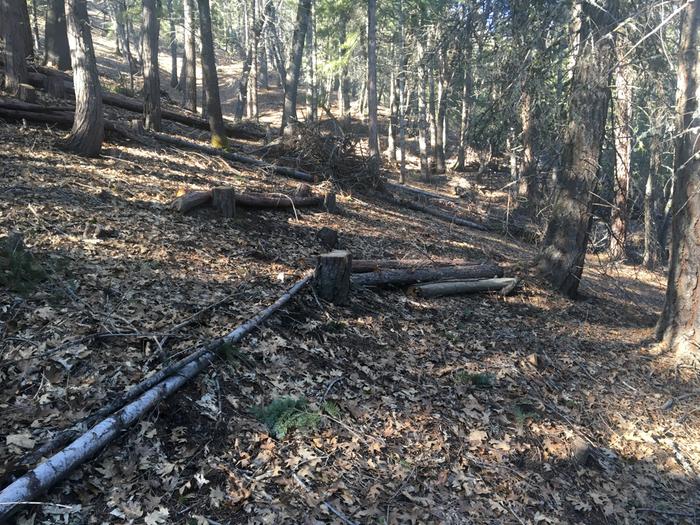 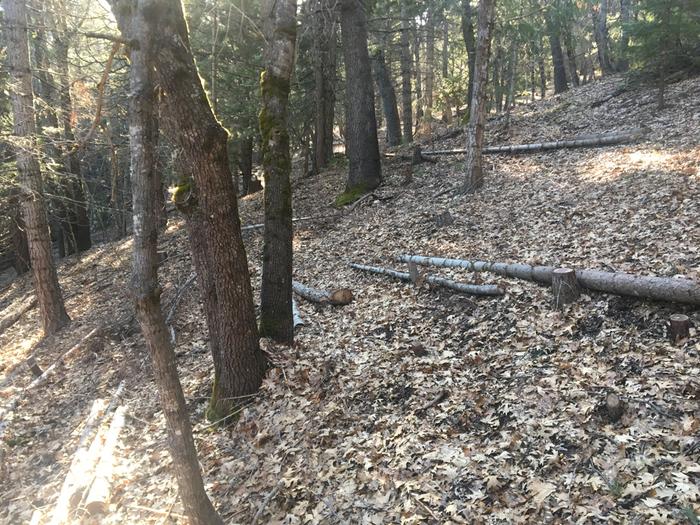