posted 2 years ago
I thought I would start a series of posts titled Happy Homesteading.

These are just some thoughts on various subjects that will make life around the homestead easier. Perhaps many people know these thoughts, tricks, and techniques, BUT perhaps not. There is no judgment here, if people know this stuff, they should just read and move along, but perhaps they will read these tips, tricks and idea, learn to apply them, and be more productive, and be a little happier around the farm.

I thought I would start with a perplexing problem…backing up a trailer!

I thought of this the other day when I had to stuff a trailer down a long road, around a harrow, then up against some pine logs I was trying to pick up. I did it in a single pass, but I started out logging 35 years ago, positioning a trailer around trees, logs, rocks, and stumps: I got good at backing a trailer up pretty fast…because I HAD TOO!

So, what are some pointers?

posted 2 years ago
The first is, always have a mental plan. Just hoping your trailer will end up where you want it, probably will not happen. They say Wayne Grezky would take the puck on the opposite end of the arena, envision how everyone would react, then stuff the goal in the net. It is no different for backing up a trailer, houses, telephone poles, rocks and fences are all like hockey players wanting to thwart your efforts. I do not get out a drawing board and map every trailer backup, but I do picture it in my head. That goes a long way to getting my trailer in the right spot…the first time.

Another pointer is to know your trailer. The more axles you have, the harder it will be to turn. A long trailer with (2) axles takes a lot more effort to get turning, but once the trailer starts to turn, it is quick coming around. In contrast a short, single axle trailer is going to pivot really quickly because it has so much less drag on it. It starts to turn, and continues to turn…really fast.

Always go slow. Even I back up slow. It gives me more time to react, and a lot of times I really have to whip the front wheels back and forth to stuff a trailer where it needs to go. Doing this at faster back up speeds is often impossible. Slow is deliberate, and deliberate is fast.

Trailers are so hard to back up because you have two turning points turning. Obviously, you have your steer tires, but also your trailer can be aimed by what is happening with your steer tires. This is where people make mistakes. You can maneuver your steer tires, and you can stuff your trailer in some odd angles and places, but it is CRITICAL that your drive tires (say the rear tires on a tractor) are on firm ground, and where they need to be. You cannot move them…plant them where they need to be and manipulate the steer axle. It really is THE principal to backing up.

Always try to get your trailer as straight as you can. I have shown an example of a backup situation where say, I am going to put an old couch on a trailer from the backdoor of the house. The first picture is my preferred method because when I shift into reverse on the front lawn, the tractor and trailer are straight. As I turn in the back yard, it is a single, gentle sweep to make the turn while backing up. The second picture however, is less preferred because the tractor and trailer would not be straight, it would be in a turn that I would have to follow from the driveway, all the way to the back yard…a lot tougher to pull off.

If you mess up, never feel bad about pulling ahead and starting over. Better to start again then to get stuck, or damage something.

Use a spotter if you can, again a bump in pride is better then bumping a house, barn or another vehicle. Equally, listen to that spotter. Even though you may not think so, most likely they do know more than you…yes you are too close, when they say STOP. STOP!!!

When at another person’s place, ask if it is okay to drive on the lawn before doing so. Some people really hate it. Me…I drive my bulldozer across my lawn, and in backing up trailers, whatever it takes, but some people are touchy about their lawns…always ask first.

Practice makes perfect, but pulling-through is always safer then backing up: ALWAYS. It is also more productive.

Light loads more often? Most of the time that holds true, but not when it comes to backing a trailer in a hard spot. Just because you got the trailer there the first time, does not mean you will again. Obviously do not take more then you are able, but do not bank on getting back into that same spot again either.

Have a clear, smooth path if at all possible. The rougher the pathway, the more likely the trailer wheels will get “trigged” and make its path backwards hard to predict.

Be wary going forward, because if you cannot go forward any more due to mud, snow or sand, then backing up is going to be ten times worse.

(The pictures below show my perferred method of getting a tractor and trailer to the back yard of this farmhouse (not mine). The red is forward progress, and the blue is reverse movement.) 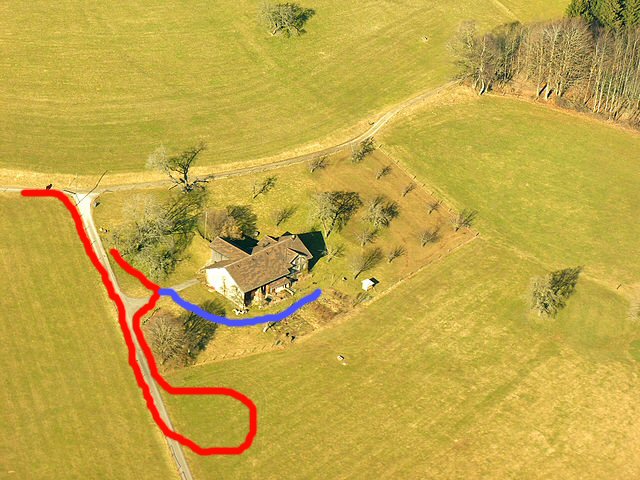 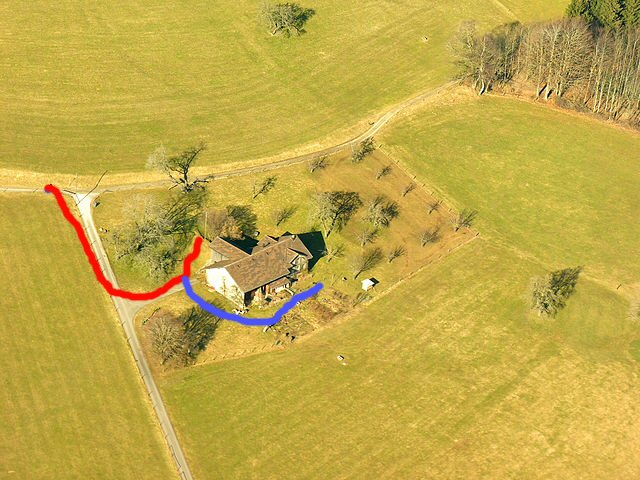 I found it very helpful to learn about trailer maneuvering using someone else's trailer and vehicle, with them not being present and both items being well-scuffed ahead of time.

As with most things in life, having attractive members of your preferred gender observe you maneuvering an unfamiliar trailer and vehicle in close quarters is a surefire way to make things end well.

Always remember, feeling your way back doesn't work if the barrier is an electric fence. Likewise if you've gone from a 2500lb car and 600lb trailer to a 7000lb truck and 10000lb trailer... it's not a little bump anymore!

Dillon Nichols wrote:As with most things in life, having attractive members of your preferred gender observe you maneuvering an unfamiliar trailer and vehicle in close quarters is a surefire way to make things end well.

I hear you. I am married so I am not available for individual retail sale anymore, but if I was, in Permicultural Singles I would end my blatant Travis Johnson advertising by saying, "and can back up a trailer with incredible finesse." I would think any homesteading savvy woman would readily see the merits of that skill.

Today, it is jut one of many skills I bring to Katie as her Trophy-Husband!

(Just teasing people: Tongue-In-Cheek humor, as I am not that self-absorbed! If anyone has seen a photo of me, they know I am anything but a Trophy-Husband).
John Weiland
pollinator
Posts: 1745
Location: RRV of da Nort
338
posted 2 years ago

Dillon Nichols wrote:......
As with most things in life, having attractive members of your preferred gender observe you maneuvering an unfamiliar trailer and vehicle in close quarters is a surefire way to make things end well.

Bryan Elliott
Posts: 95
Location: Oklahoma Panhandle
19
posted 2 years ago
Anymore I don't have to think which way to turn the steering wheel to back a trailer.  If you are new and just starting it will seem backwards to you.  An easy way to remember is turn the BOTTOM part of the steering wheel in the direction you want the trailer to go while backing.  Which means you are actually turning the top of the steering wheel opposite of the way you are backing.  Just do it a few times and it gets easier unless you have a large audience watching you.
Jennifer Richardson
gardener

posted 2 years ago
I think the real key for me in backing up trailers has been to have a good repertoire of macho skills to draw from once everyone is through laughing at me, to assist in the recovery of my ego.

I once took so long, with so many “pull forward and try again”s, to back around some minor obstacles and down a straight boat ramp to launch my boat that I was forced to grab a rope from behind the seat of my pickup and lasso a shark in front of all the witnesses just to make myself feel better. (Okay, the shark was stuffed and mounted on the wall of the marina, but it still made me feel better).

More seriously, just go slow and keep correcting and you’ll eventually get it. Also, if you can’t really tell if you’re about to back off the mountain/into the propane tank/off the shoulder into the mud, stop and check, don’t believe the little voice that tells you it’ll probably be fine if you keep going.

Bryan Elliott wrote:Anymore I don't have to think which way to turn the steering wheel to back a trailer.  If you are new and just starting it will seem backwards to you.  An easy way to remember is turn the BOTTOM part of the steering wheel in the direction you want the trailer to go while backing.  Which means you are actually turning the top of the steering wheel opposite of the way you are backing.  Just do it a few times and it gets easier unless you have a large audience watching you.

Yep, this is what helps me back up a trailer,
when it's  not coming to my head naturally.
Mike Haasl
steward

posted 2 years ago
If you're backing into a tight area and you're lucky enough to not need to turn the wheel for the last 5 feet, don't turn it.  For instance to make a minor adjustment that doesn't really matter.  Then when you pull ahead you will have kept the geometry all the same and you should be able to pull ahead that first 5 feet without too much worry.

Back up cameras are great to get your trailer ball lined up to the trailer on the first try.  One of these days I'll paint my trailer hitch white so it's easier to see in the camera.

Gradual curves are almost easier for me than trying to back up perfectly straight.