BB electricity - sand badge
posted 2 years ago
This is a badge bit (BB) that is part of the PEP curriculum.  Completing this BB is part of getting the sand badge in Electricity.

In this Badge Bit, you will install a DC solar system.

Solar systems can be huge (insert Milky Way joke here).  But they don't have to be.  Let's harness the power of the sun to build a small DC solar system with battery storage.

Here are a few videos:

Provide photos or video (< 2 minutes) of the following:
- Description of the system, power and capacity.  Explain how the battery(s) will put out 100W for 6 hours
- Area where the system will be installed
- Parts before you install/assemble them
- Completed installation
- Evidence of a phone charging

Side Notes:
If you have an alternative solar installation that you'd like to do of a similar complexity, post below and ask if it could be added as an option.
COMMENTS:
Erik Pehoviack
Posts: 33
Location: Hemingford Nebraska
20
3
I like...

posted 1 year ago
Approved BB submission
Hello Permies community. This is my second installment towards the PEP sand badge for electricity. In this presentation I will cover completion of a small solar trailer with battery storage I developed for our meager light usage and device charging. This project was finished back during the infant stages PEP but I want to pass the knowledge on.
This little trailer will be the base for the solar panels and charge controllers.

This location in the basement will house the balance of components.

I used the following components for the photovoltaic and energy storage solution:
3 - 110 watt Mitsubishi photovoltaic modules

1 - 60 amp circuit breaker (E), 2 - Group 27DC batteries (A), 1 - Blue Sea Systems battery meter with cigarette lighter port and USB outlets (C), 50’ of 4 conductor 8 gauge trailer wire (D), 2 - 000 gauge battery cables (F), and an old automotive fuse panel (B).
When sunlight strikes the panels electricity is sent to the charge controllers where it is optimized and is then sent through the 8 gauge cables, through the circuit breaker, to the batteries. The charge controllers limit power production in relation to capacity and temperature. The power then travels from the batteries, which are wired in parallel, to the fuse box where it is distributed to the power center circuit.
According to turbinegenerator.org my location in Hemingford Nebraska should produce 5.2 sun hours per day fixed, 6.5 sun hours per day single axis, and 6.7 sun hours dual axis. If I leave the trailer facing due south it should be able to produce 1.7 Kwh per day (330 watts of power x 5.2 hours of operation).

The charge controllers are mounted behind the solar panels under an aluminum enclosure. 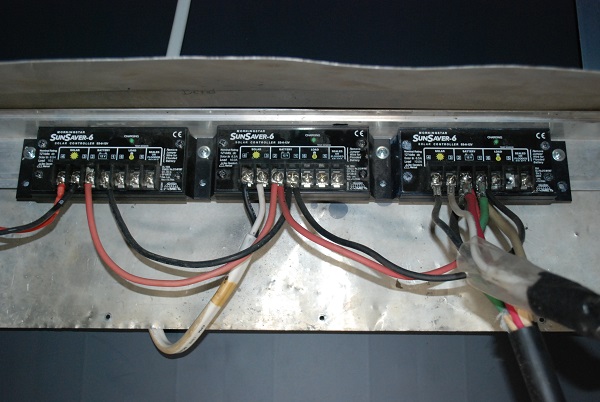 Electricity as measured on the PV side of the three module connection is 14.6 volts. My DMM isn’t big enough to risk measuring total current output.

Here are the panels situated outside of our RV from which the batteries came. They receive power from 8 am to 4 pm during the winter months and from about 7 am to 8 pm summer months. We have much shading to the east and west but can turn the trailer to optimize production.

The batteries were relocated to the basement to control their climate, extending life. This also provided a weather tight location to put the fuses and power output ports. Here is a photo of the power panel connected to the ports and built in voltmeter to continuously monitor battery health.

Here is where the devices get charged. It is a spot on the floor next to our south living room window. The USB cords come up through a hole in the floor (orange arrow) and are held from falling through with a clothespin. As you can see in the pink circles the phone is charging and has achieved 100% charge. 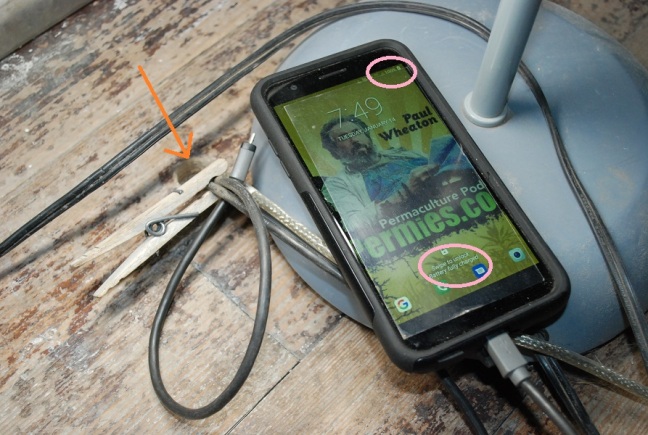 Here is a photo of the finished storage / usage portion of the system.

Finally, an explanation of power production: In order to meet specifications this system must produce at least 100 watts for 6 hours. I’m not sure if that is solar wattage or battery wattage, but I’ll demonstrate both.

As mentioned before our latitude of 42 degrees will produce 6.5 sun hours if I move the trailer along with the sun. 6.5 hours x 330 watts (total for all three panels) produces a total of 2,145 watts. Divided by 6 (hours) that equals 357 watts per hour.

On the battery side the two group 27DC batteries are wired in parallel, doubling their Amp-hour capacity to approximately 200 Amp-hours. Deep cycle batteries are rated for AH’s using a specified amp draw for a specified time, in this case 5 amps for 20 hours per battery. Doubling this capacity with two batteries effectively provides 8.3 amps (100 watts) for six hours. In addition to possible BB credit I'd like to offer this tutorial for those interested in renewable energy. Many components can be picked up cheap if one watches for deals. Thank you for reading.

posted 1 year ago
Ben Peterson has offered his full ebook of plans for portable solar stations to be free for a while. 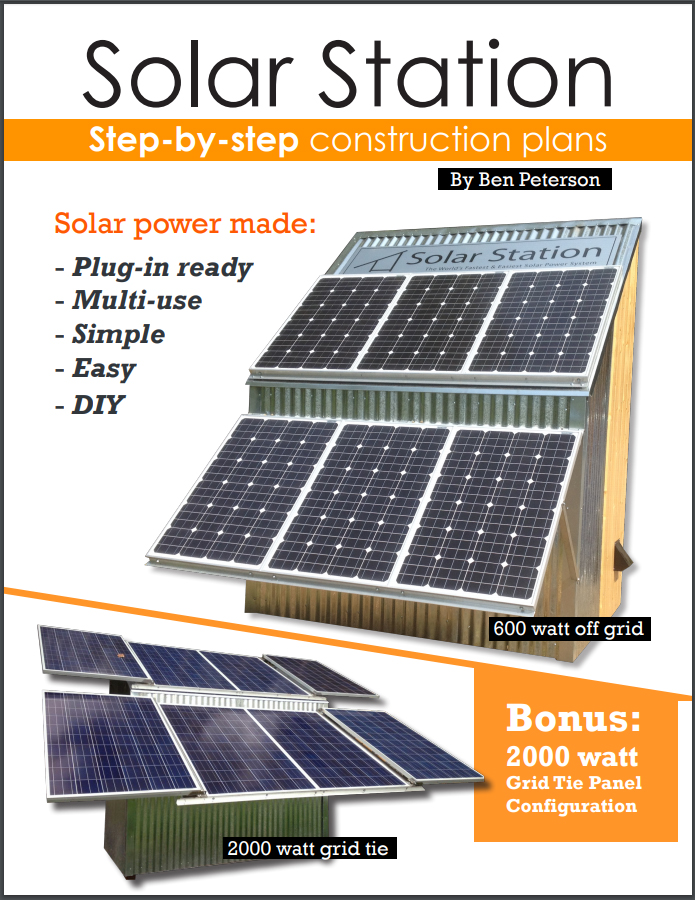 posted 1 year ago
Installed solar power at our root cellar, in the process of restoration. 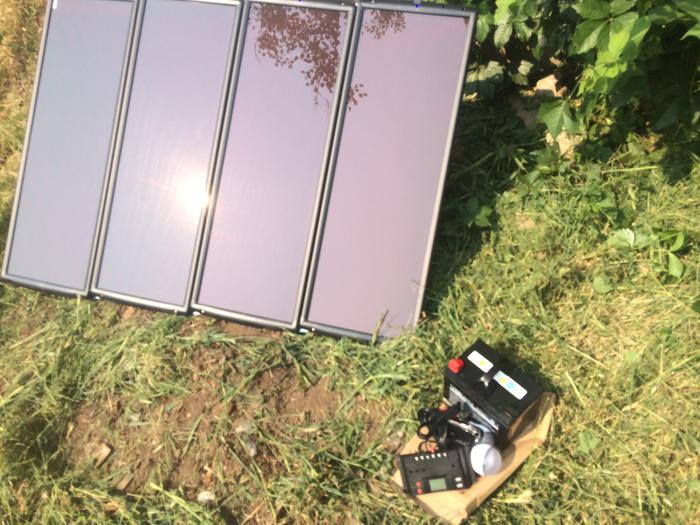 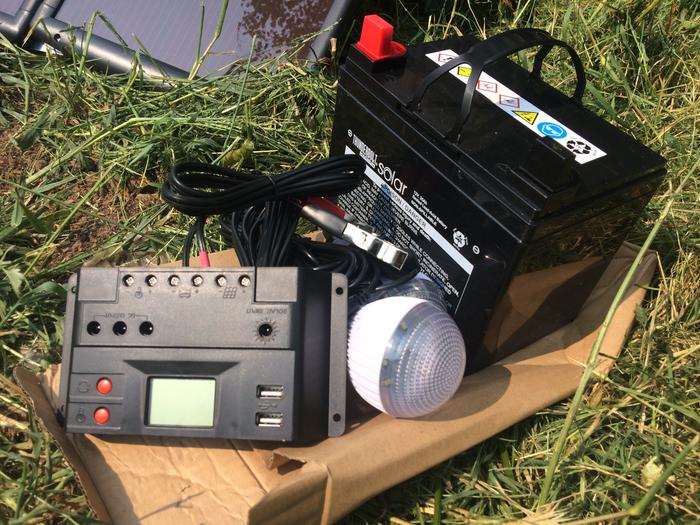 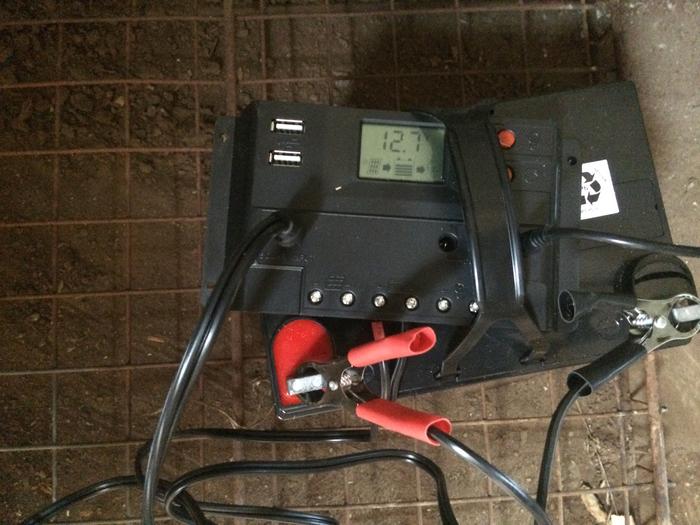 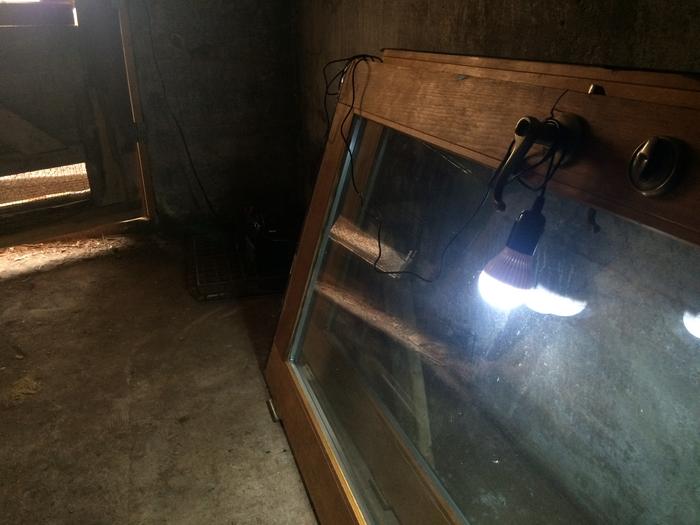 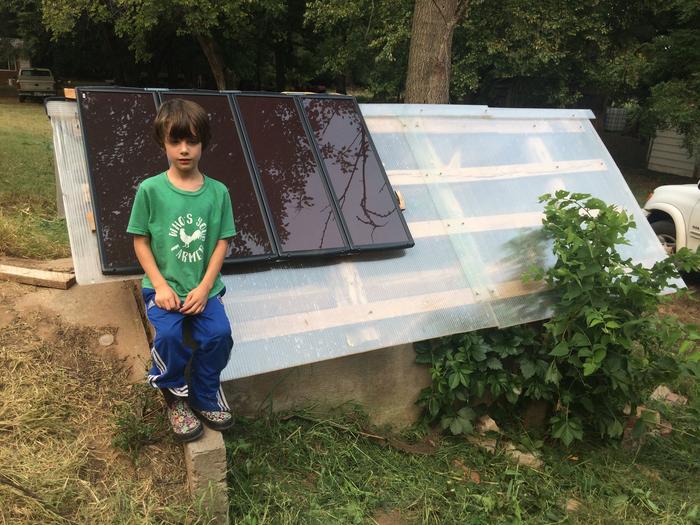 Could you provide the picture of the 12V outlet and do the math for us to show it can do 100W for 6 hours? Thanks!

posted 1 year ago
Approved BB submission
This is the small DC solar system I have put together primarily for when my buddy and I go camping.  It can get hauled out for other things from time to time.  The idea is that it would be sort of portable, at least as portable as can be with a heavy battery.

The photovoltaic panel is a 100 watt 12 volt flexible type.  I wanted this for the frequent traveling aspect of the system.  It's lighter weight than a traditional panel and even better no glass to worry about breaking!  The charge controller was a nice little model, still pretty cheap, that has sockets for USB charging as well as 12 volt power out, and an on/off button for the power output.  The battery is a 55 amp hour 12volt AGM type.  Using the formula
amps x volts = watts we have 55 x 12 = 660.  So this should in theory be able to put out 100 watts for a little over 6 hours.  That would probably not be great for the health of the battery to drain it down that far, but another principle of solar power is to use the power when the sun is shining so you don't rely on the battery and can extend it's life.  Hence with a 100 watt panel running the system at 100 watt draw for 6 hours with some sun should be no problem at all!  Typically when camping we use it just for some lights at night and to charge electronic devices so the capacity is way underutilized.

I don't actually do cell phones so I can't show it charging one, but I'm guessing the spirit of that requirement is that it should be able to charge mobile devices that use 5 volts to charge, ie a USB cable.  I did recently break down and get a tablet so I'm showing shots of that being charged.

You are welcome to check out my blog at http://www.theartisthomestead.com or my artwork at http://www.davidhuang.org
My latest blog post is Stories of Gratitude - A deflated bike tire.