BB gardening - straw badge
posted 2 years ago
This is a badge bit (BB) that is part of the PEP curriculum. Completing this BB is part of getting the straw badge in Gardening.

Seed saving is a huge part of permaculture! By saving your own seed, you are creating more adapted plants to your specific area, usually resulting in more vigorous and healthy plants! You also don't have to keep buying new seed every year.

Seed is generally saved from the strongest growing plants and ones with certain traits that you want the offspring to have. 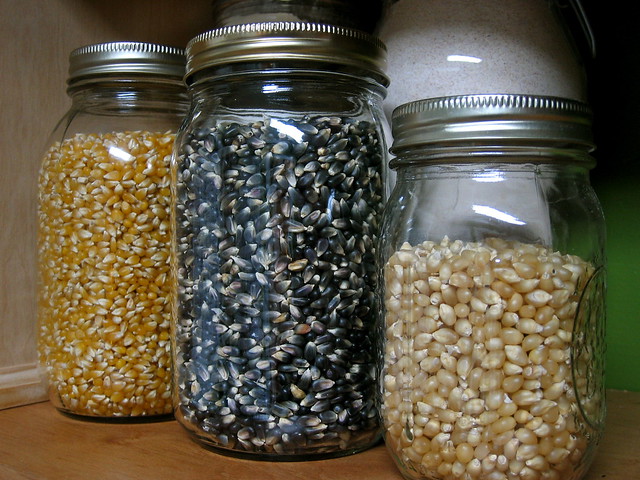 To get certified for this BB, you will need to save seed from 4 different species.

This thread has some good basic information on saving seed from common vegetable varieties.

It's important to clean the seeds and store them in a cool and dry place. This thread discusses it in greater detail.

This thread has a good list of additional reading material on seed saving and plant breeding.

How to Certify That Your BB is Completed

posted 2 years ago
(1) Poppy
Not sure what kind of poppies these are. My daughter found them growing in a mountain clearing on Vancouver Island. The flowers were purple or red, and I assume are garden escapees. She thought there were two types, which makes sense since some seeds are black, others gray-blue. She also felt that some of the pods were probably not mature at the time of collection.
I dried them for another two months on the kitchen counter. Some were already releasing seed through the little holes in the pod when she gave them to me and continued to drop seeds into the tray so they were empty when I broke them open this week, so those were definitely mature pods. Others had to be broken open to get the seeds, like the one in the photo, and I am not certain that those were fully mature. They do seem black and ripe, apart from not having been released from the pod, so I will dry them another day or two on the counter outside of the pod and then pop them into an envelope. Plant them all in spring and see what happens.


(2) Giant sequoia
We gathered these last winter, and they sat in a bin on my counter for the past 10 months to fully dry as I had read that would cause them to release the seeds. It worked for most of them and I coaxed the few seeds that were stuck in tighter spots in the cones out using a knife blade. Rather than storing these until next spring, I am going to wet-stratify them in a paper towel in a ziplock bag in the fridge for the next month. The paper towel is wetter than I intended, so I will leave the bag open for a few days to evaporate a bit of that water. You can’t see it in the photo, but I have written a note to myself in sharpie on the bag – stratified Oct 4, check Nov 4. I read that it should be a minimum 4 week cold stratification. Then check and plant any that are sprouting, and put the rest back to continue stratifying. I am planning a trip back to where we got the seeds to scrape up some soil and get the right micro-organisms for these guys when they are planted.


(3) Garry oak
These are from my yard. We seem to be having a real mast year for acorns, so I gathered a big bag (had to compete with Steller jays for the ones in the trees – they can have the ones too high for me to reach – and the goats zoomed in and grabbed any that I dropped on the ground).
Apparently Garry oak acorns do not require stratification, but have some chemical that suppresses germination until sufficient rainfall has occurred to wash it off. Sorry, I don’t know what it is, but I read that somewhere. So I have been alternately soaking (for a day or two) and then draining these (leaving them out of water for a day or so and then putting them back in fresh water) and after about 4 changes of water I started to see signs of germination. I have about a dozen already planted in pots and you can see the little sprouts from some of those I haven’t planted yet.


(4) Hardy succulents
I have a ‘deck railing’ planting of succulents that have gone through a couple of winters here, sort of like a window box type of arrangement, and since many of them went to seed this year I decided to save seed for planting next spring. I don’t have a complete ‘before’ photo as I harvested the seed over a month ago, but took a photo showing a few of the late bloomers. I snipped off the flower stems with seeds, let them dry on the kitchen counter for a month, and stripped the seed off the stems last week. I am just going to leave it in the pods over winter as it all seems very dry, and the seeds are like tiny grains of dust. They can spend the winter in envelopes and I will break up the pods at the time of planting.


(5) Lemon balm
Lemon balm grows throughout the vegetable garden here and reliably self-seeds each year, but we are looking for land to transition from hobby-farming to making a living from farming. So we may need to re-establish lemon balm in a new location next year if all goes to plan. I collected the brown lemon balm stalks last month and dried them in the kitchen. I picked off the flower/seed heads which were quite dry and crunchy and crumbled them up. Then we winnowed the seeds using human lung power – the seeds are very tiny and we were afraid the electric fan and even a hairdryer would be too windy. They are still not 100% clean, but it did reduce the volume so they fit into one small envelope. I bought a box of 500 of these little ‘coin envelopes’ from Amazon, by the way, and find they are a good solution for seed saving for smaller seeds. Folding origami envelopes would be another way to do this – perhaps a more elegant solution for special gifts from the garden?

(6, etc.) English walnut, buartnut, hazelnut
Since we are planning to plant many nut trees at the new place (once we find it), we decided to start by collecting seed at a heritage nut farm located in Kelowna, BC. The Gellatly Nut Farm was a project of the Gellatly brothers starting in the early 1900s. They sourced nut species worldwide and turned their family farm into an important breeding site for northern-hardy nut varieties for North America and elsewhere. The last remnant of the farm, a 10 acre nut tree test site, was almost swallowed up by development but the local community rallied to save it and it is now a regional park. Volunteers maintain the nut orchard and sell seedlings and nuts to help support the property. My daughter and her friend went there two weekends ago to pick nuts and came home with a large bin full, that we hope will give us some good starting genetic diversity. One of the volunteers also took them into the heritage buildings which was great since the original nut-drying shed and equipment are still in use and are about the scale and level of technology we would envision using. But I am digressing from seed saving.
We held back some nuts for cooking, but the majority of what they brought back is now being cold-stratified for planting next spring. I layered the nuts in a metal garbage can in layers of peat moss and hay, wrapping them in a sort of cylinder of hay to provide a bit of cold-weather protection in case we get any deep freezes this winter. This is placed in the unheated shipping container that I use for feed and hay storage. I can easily peek in at them during the winter to make sure they are not getting moldy, and will pot them up in the spring. Sharp-eyed viewers will also note that there are chestnuts in the collecting buckets at the nut farm, but we kept those for cooking as I have an order of 400 grafted chestnuts coming in the spring.

posted 2 years ago
Approved BB submission
Sorry I seem to have posted without attaching all the photos...hopefully get the rest of them in here....