My Brussels Sprout miracle - edit: not so much

posted 2 years ago
[update: no, it doesn’t look like this actually happened.  I went to relocate them, and there was no rooting, just the tiny unharvested sprouts at the top maturing. I guess a combination of cold temperatures and heavy mulch provided a preservation/growing environment. What I thought were new plant stalks were actually those sprouts opening up and going to seed. There’s perhaps some lesson to be learned here about Brussels sprouts. And definitely a lesson about posting too soon]


Ok, it isn’t really a miracle, but it’s something I’m absolutely delighted to discover. Last fall, I bought a bunch of sprouts on stalks, and after harvesting the stalks, I decided to just set them on the surface of my new planting area before mulching heavily with wood chips. The previous year’s stalks were taking too long to break down in the compost, so I figured I could just treat them as something more akin to brush.

Well, I was brushing back the wood chips to dig a new swale, and lo and behold, there were a dozen Brussels sprout plants growing from the remnants of last year’s Thanksgiving dinner. I’m going to have to move them somewhere since they are in the way of the swale, but this seems like a great way to propagate them going forward.

I’m in eastern Pennsylvania, 6b. We had a fair number of nights approaching 0 degrees F. They were under about 4-6 inches of wood chips, and they were easily pushing through.
32EBB36F-32D3-4F1C-9778-FFD16FEFFD1F.jpeg 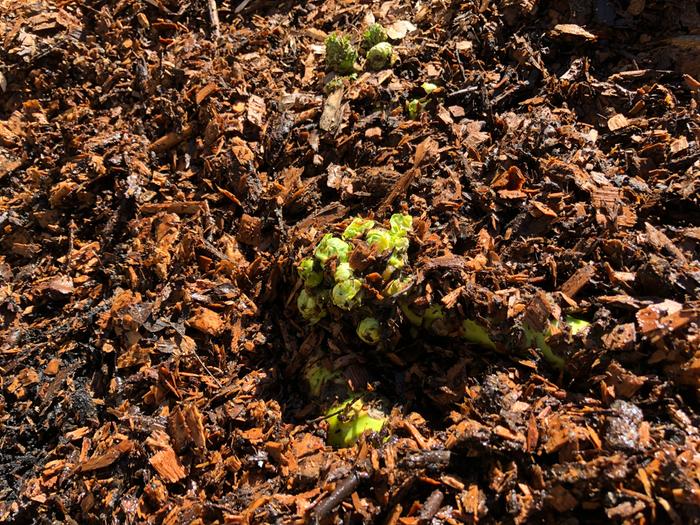 posted 2 years ago
Very neat! Self seeders are awesome!

posted 2 years ago
Awesome!  So were there any sprouts on the stalk that you left in the garden or was it just a bare stalk?

posted 2 years ago
I can’t recall, but the way they are clustered around the bottom suggests to me that they are popping up from old sprouts left on the stalk.