posted 1 year ago
I have a Moorpark Apricot that was planted in Spring of 2017, and today I suddenly noticed it's leaves look like they are wilting. Some branches are doing fine, some branches have all their leaves "wilted".
This is rather sudden - I walk around and check my trees every other day or so, just for fun, and so there was absolutely no blatantly noticeable sign of this three days ago. 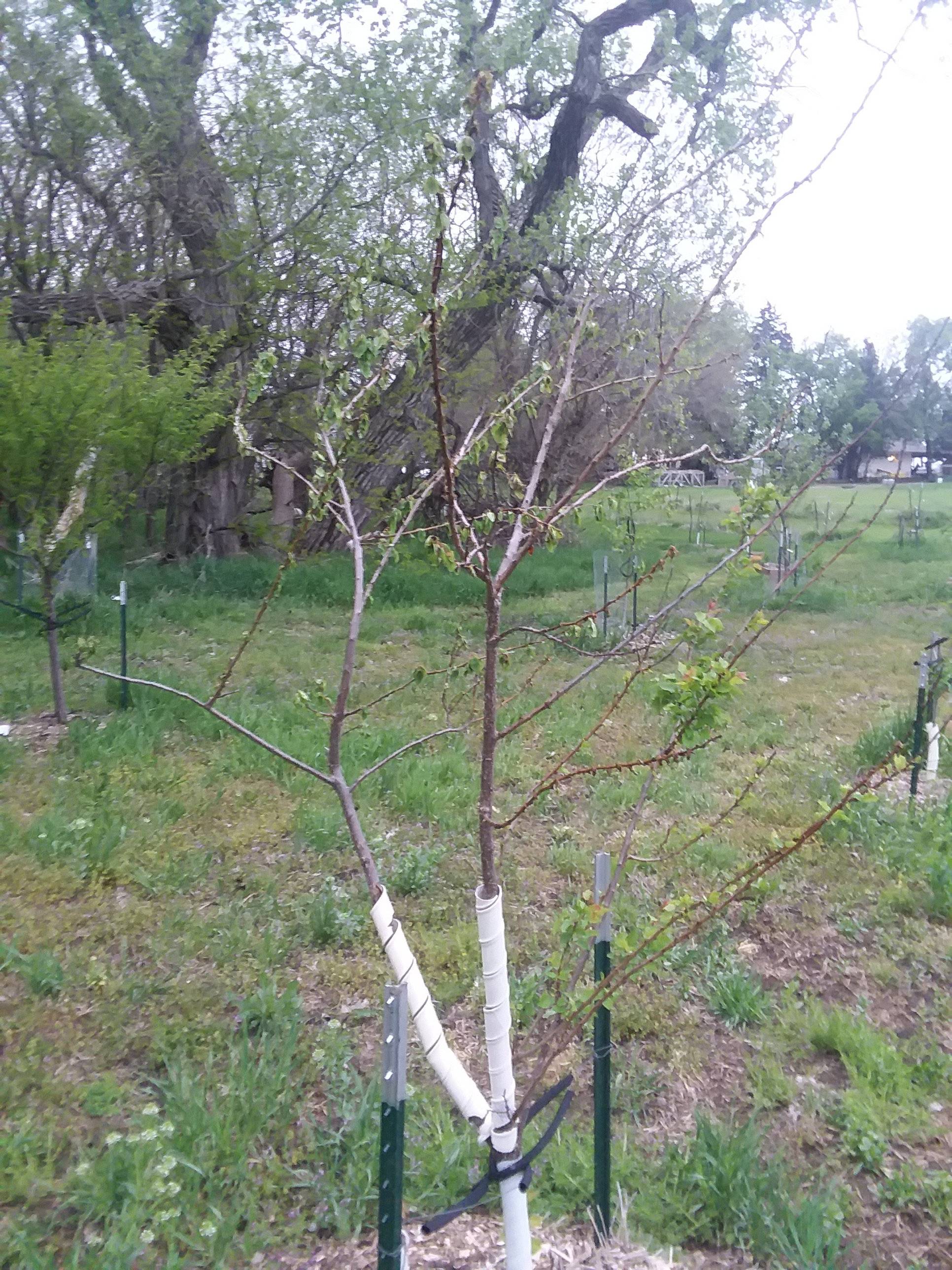 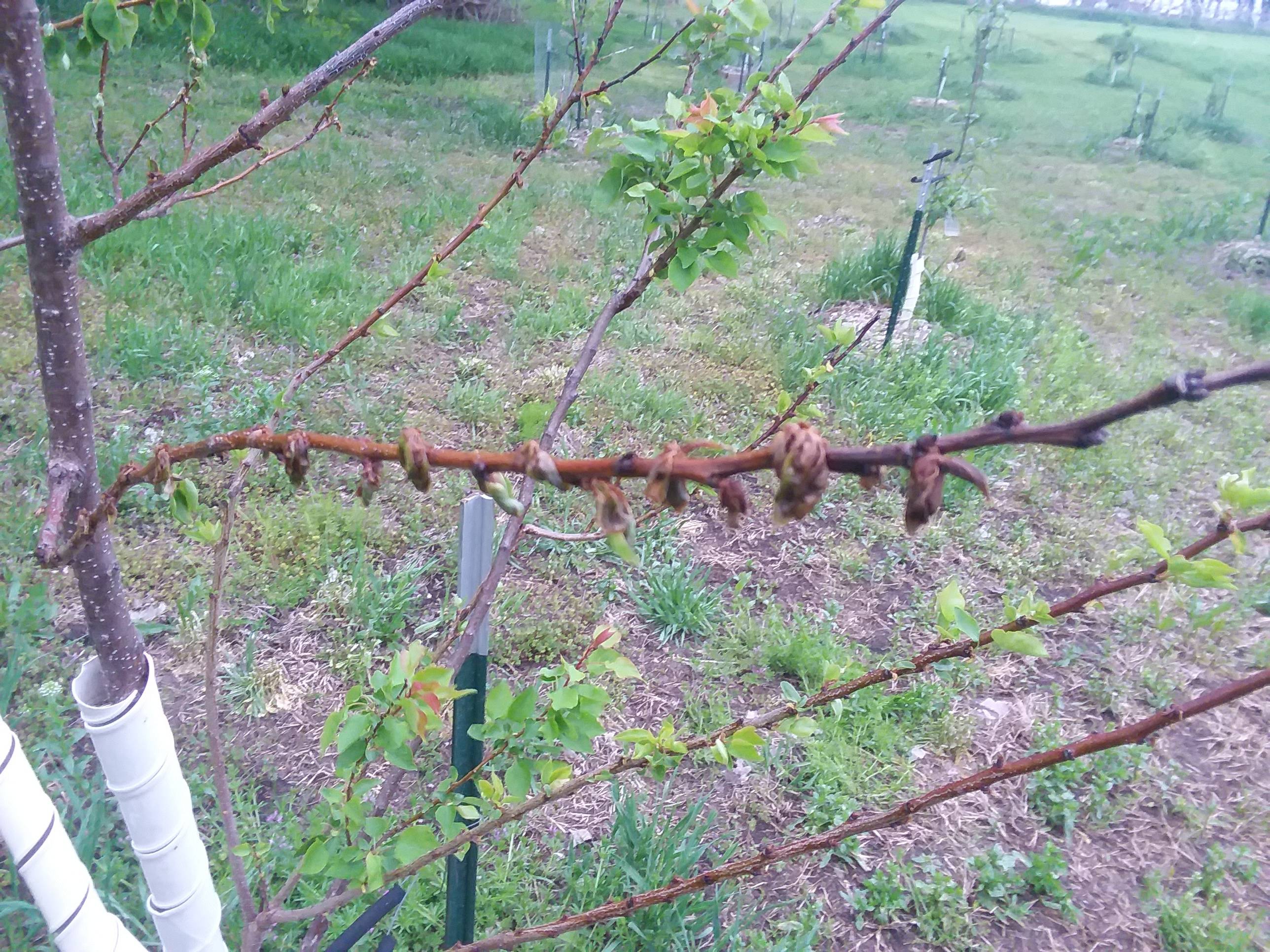 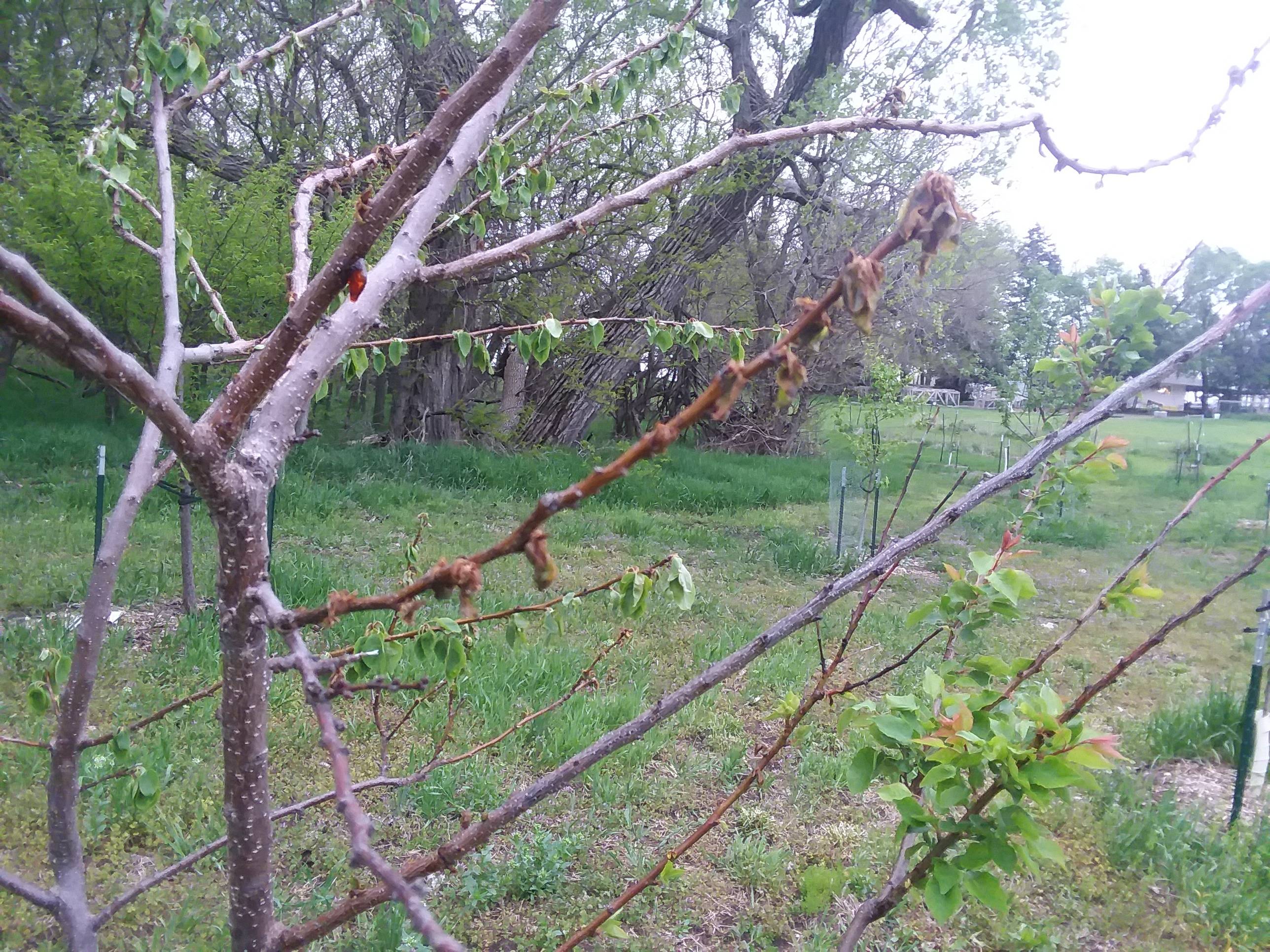 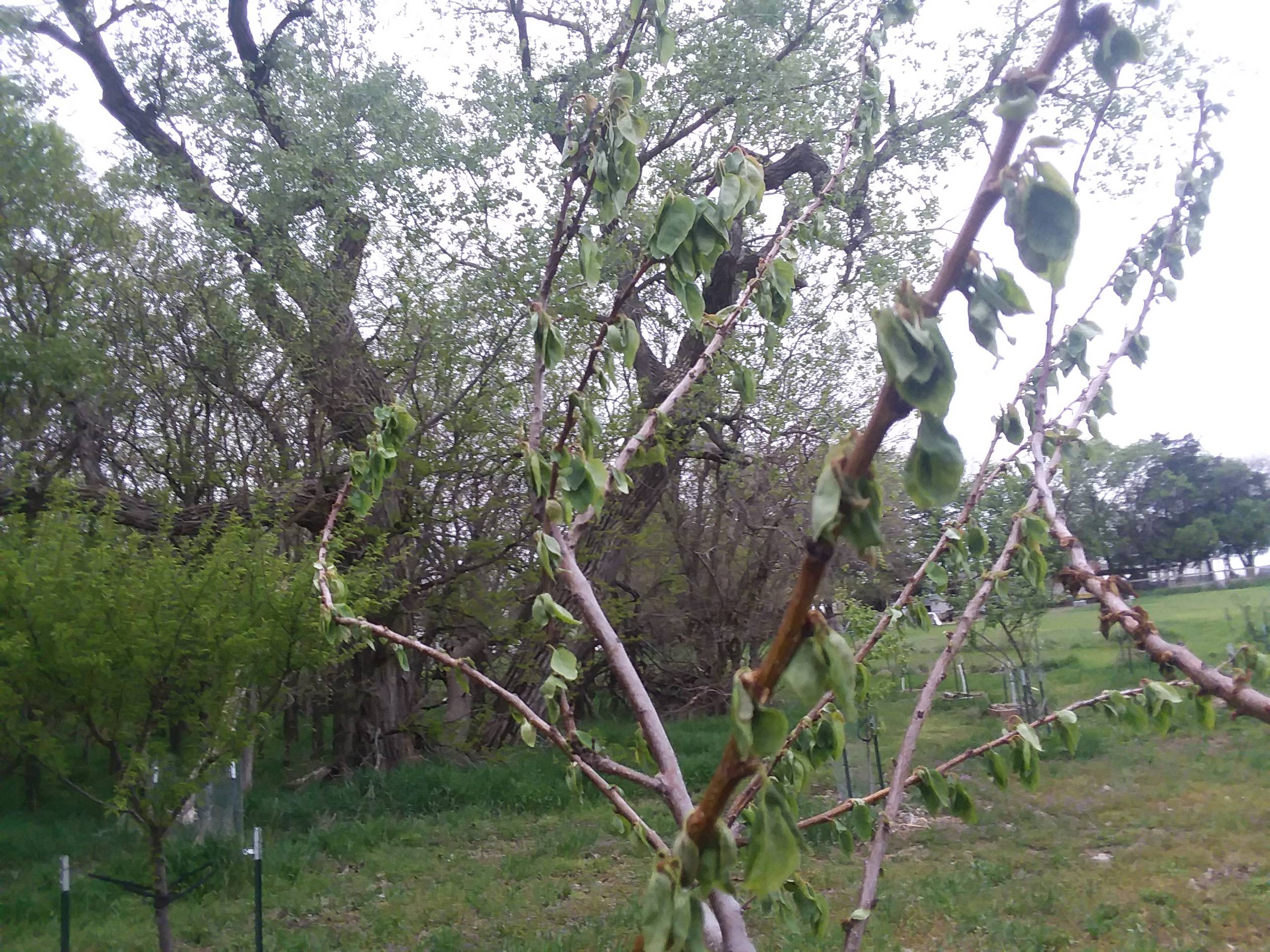 ...and yet these leaves look fine. 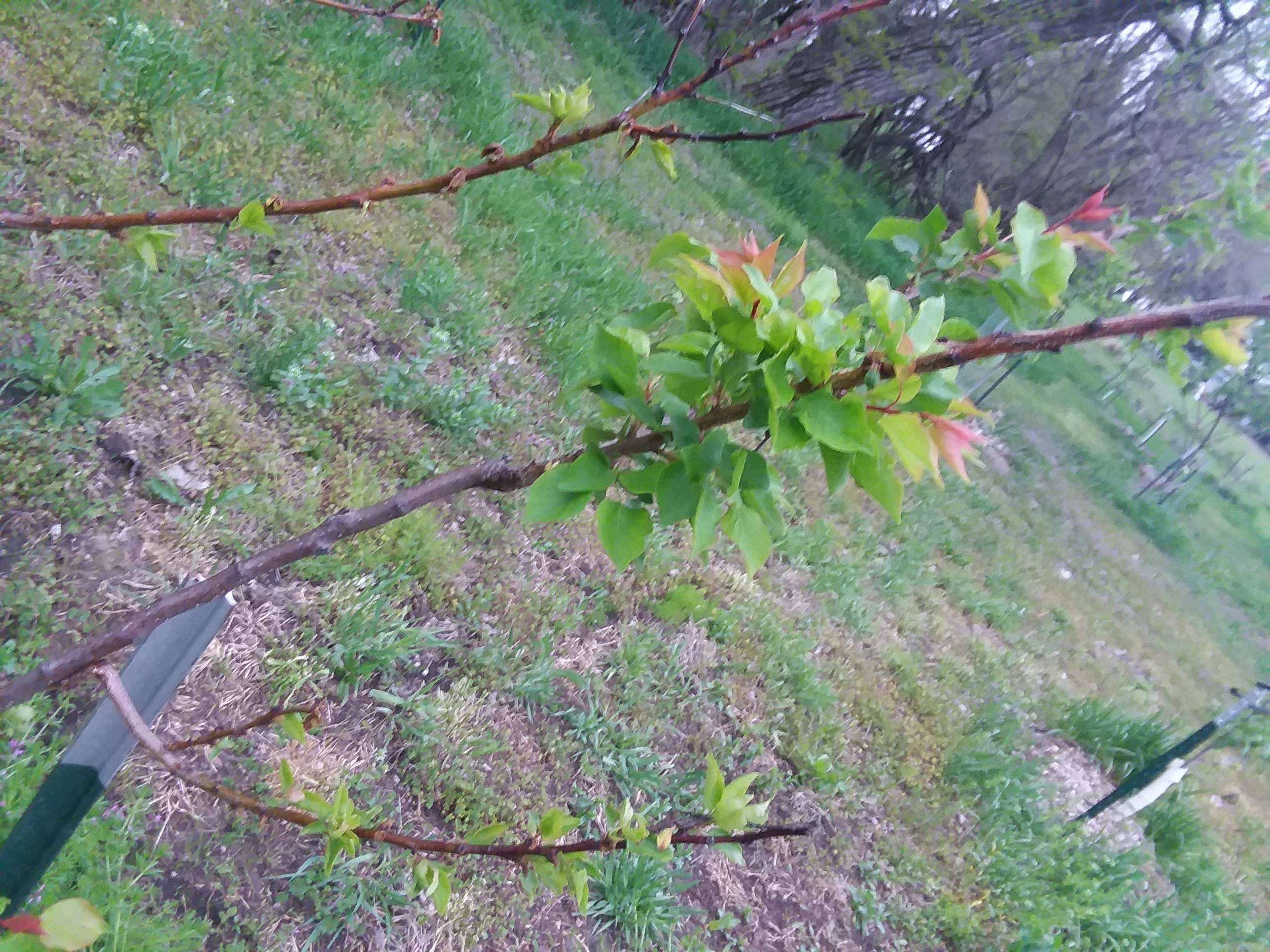 Does anyone immediately recognize this as "Oh, it's obviously X!"?

posted 1 year ago
Where are you located?

posted 1 year ago
Fireblight comes to mind, or possibly freeze or frost damage depending on your area?

Hoping whatever it is goes away quickly for you!

posted 1 year ago
It looks like the wood is healthy so that's a good thing.  I agree with what others are saying either brown rot or possibly frost damage.  Doesn't look like Aphids.
Jamin Grey
pollinator
Posts: 173
37
I like...

James Landreth wrote:Where are you located?


Steve Thorn wrote:Fireblight comes to mind, or possibly freeze or frost damage depending on you area?

Temp has been fluctuating, but to the low 40's not to 32. Last frost was at least two weeks ago. It made it through winter fine, leafed out fine, even put out a few blossoms (for the first time) - I only saw about three blossoms, which I assumed was fine for it's first year flowering.

Two pear trees, only 15ft away, several peach trees, and a plum tree, all seem unaffected (though they might be blight resistant pears, I forget - D`Anjou and Luscious). This appears to be the only tree affected, I just now walked the trees and didn't notice anything wrong with the others.

It gets some serious water around where it's planted - most of the trees do, so I have it planted on a raised 8" high dirt mound to elevate it's rootball. We got some serious rain about three weeks ago, but it didn't cover the graft or anything, and drained quickly so after a few hours the top of the dirt mound was still 6" above the water. Is it possible it's waterlogged, and just delayed showing symptoms until three weeks later?

Another serious possibility is, I noticed a year or two ago its lower bark was seriously peeling off. I'm not sure why - I was assuming either sunscald or deer. But it's done fine since then. I had it covered with some white plastic spiral tree guard things. I had honestly forgotten about it until I just now took off the tree guards and took some photos - it doesn't look any worse than previous, but it's possible the amount of bark removed is preventing enough magic tree juice from reaching some of the branches. 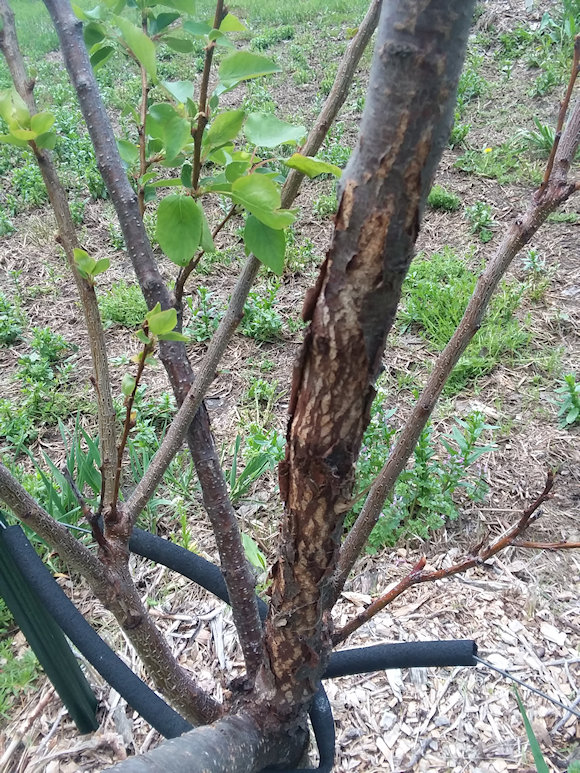 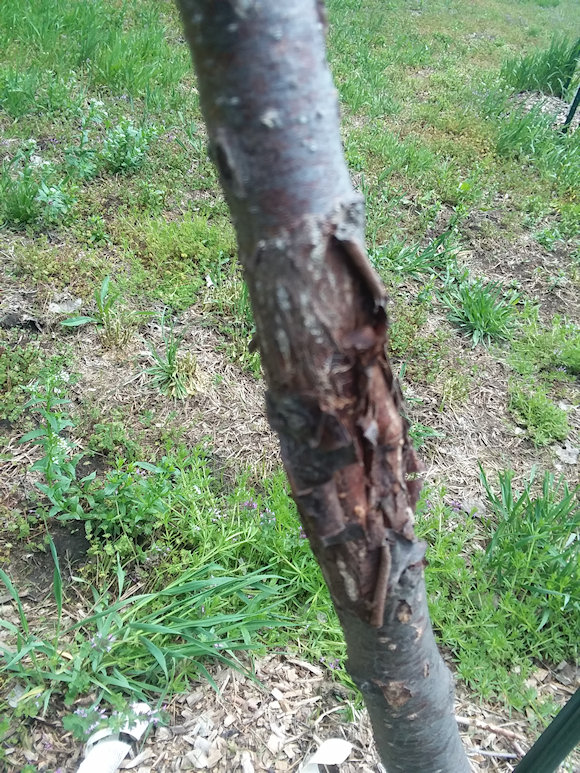 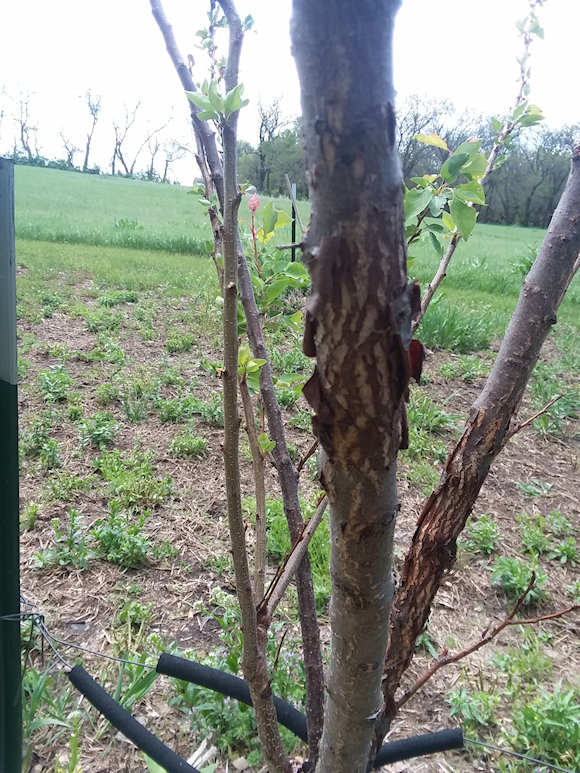 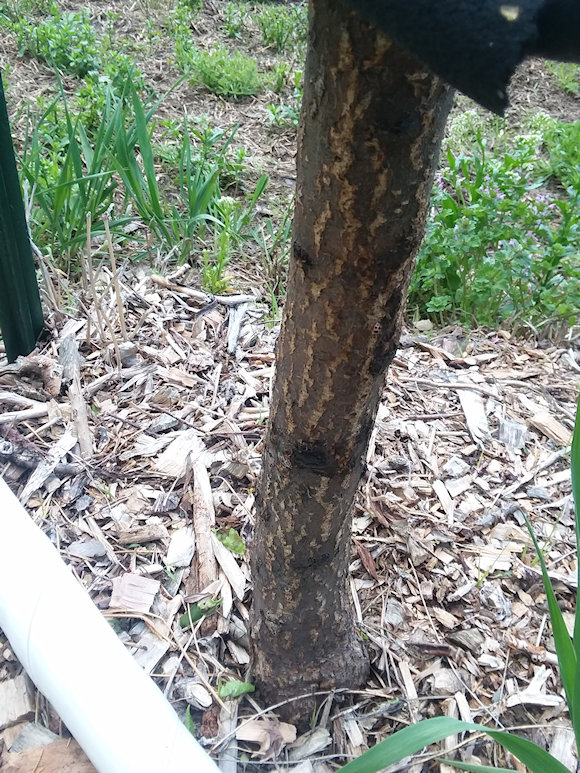 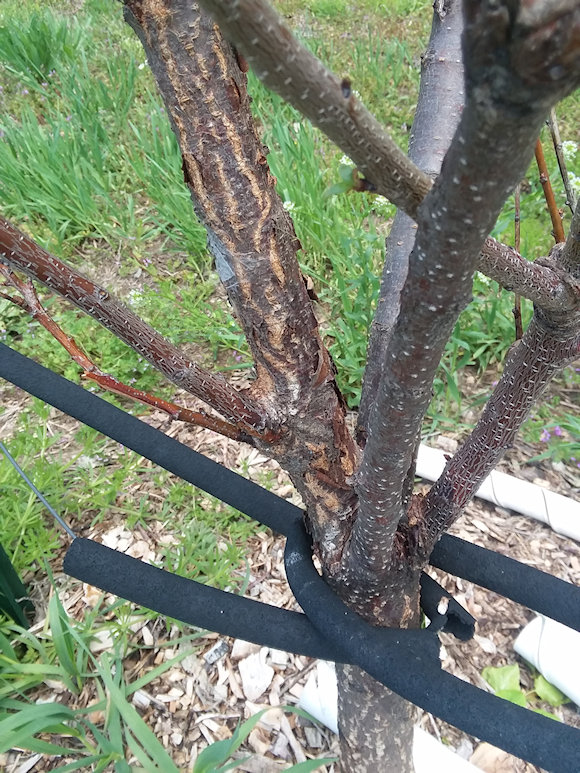 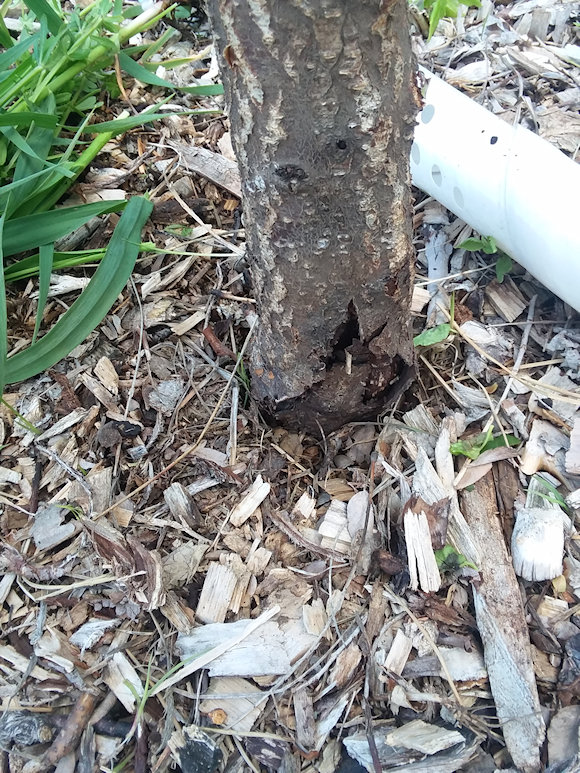 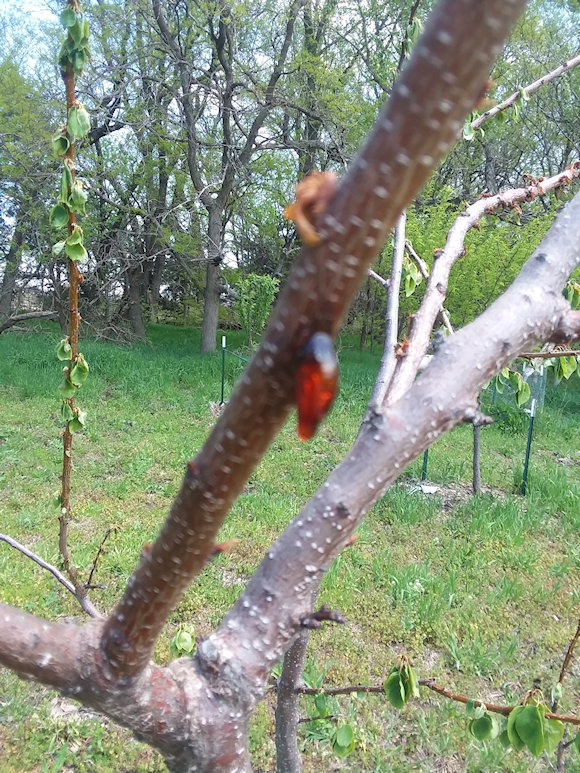 It's pretty bad, but again, has survived for at least a year just fine.
There does seem to be a correlation between the worst damaged bark and the most dead branches, but I'm not 100% sure.

There's also two globs of tree sap about a 1/2" by 3/4". Not sure if that means anything.
Oh, and it had a watersprout or rootsprout I just removed - that might've been sapping a little of the tree juice, but surely not much, as it was only about three inches and likely new just this spring.

Maybe I should do a bridge graft? The last bridge-graft I attempted, was less a surgery and more a slaughter, and needless to say, the patient didn't survive. I guess I can try again, if that's what you think is the best approach?

What if I just pruned back some of the worst branches, so the tree doesn't have to work as hard to send juice to the remaining branches?

posted 1 year ago
That could be fire blight but it doesn't look like the pictures I'm seeing.  Possibly.   I think the sap coming out is Gummosis which is a sign of damage but that damage can be caused by anything.   I was looking at the U.C. Davis website.  This could be Phytophthora root rot.   That spot at the bottom of the trunk looks similiar to the symptoms.

Wow, that seems very likely the cause, especially since that area floods like twice annually and stays wet for two or three days. I do have it raised up, somewhat, but perhaps it's not enough.

Since I planted it spring of 2017, and it's only two years old, I wonder if there's still opportunity for me uprooting the whole thing, and raising it?
Basically, is it "infected" as in, it's going to die almost certainly, or if I improve the conditions will it recover?

Thank you very much for identifying the (likely) issue.
Scott Foster
pollinator
Posts: 888
Location: 6a
268
I like...

posted 1 year ago
Jamin, I'm not a professional.  If it were me, I'd yank it and get it away from my other trees.  It's a personal choice.  You have an issue with "wet feet."  Your best bet is researching varieties and rootstocks that will handle that wet area.  You

may want to plant something that will thrive.     I would wait a season before planting something back in that hole as the pathogen is there.  (See article from OSU below.)

I'm in the mode of thrive or die when it comes to my plantings.  I have no patience for trees and plants that are sickly as I've spent too much time babying things that, at best,consistently struggle, at worst, die.

posted 1 year ago
I think you could direct the water and manage it with swales. I see people like to plant their trees at the crest of a swale, and water pooling is no longer an issue.

I would take out all the plastic wrap and tree supports so the trees are not constantly touching plastic and rubber and metal 24/7. They look like they aren't free to be trees, and they look stressed as a result. Free the trees!

posted 1 year ago
I agree with Scott, that looks like root rot has taken hold in a big way. The thing to do is remove the tree and get some good, healthy compost into the area to fight the pathogen(s) that are present.

When you remove that tree, be sure to properly dispose of it far from your other, healthy trees.