posted 11 months ago
I've been looking for advice in this forum many times, but never registered or wrote anything! Until I did, and then I received Paul's hilarious daily-ish email, and "What would Pearl invent if it wasn't invented already?" totally made my day!
Currently I live in a too big and too dirty city in southwest Poland, and I have a garden which is too small.
If the city was smaller and the garden bigger, I'd have goats, sheep, ponies, chickens, cows, pigs, bees, ducks, rabbits, and pet rats.
But I only have a dog (who is absolutely mad) and a number of wild critters who choose to inhabit the tiny garden where I also grow food.
I'm trying to be an ethical omnivore because I believe that plants can also have senses and feelings, like us and animals, and even the things that are not alive can also be alive in a certain way (I'm actually planning to make some art about it; because I'm an artist).
Good to meet you all and I hope that Paul will keep spamming me with these wonderful emails!

posted 11 months ago
Haha! Welcome to Permies! I'm flattered you liked my silly thread :) Lots of neat things here, good to have to join us!
:D
Pearl

posted 11 months ago
Welcome , Flora. Hope to see you around the forums.

have you read: the secret life of plants?

posted 11 months ago
Welcome Flora:  Sounds like you will fit in around here !

have you read: the secret life of plants?


I read that book many years ago, and I definitely think plants respond to good intentions. I was at the Denver Botanical Garden with my sister, who thinks I'm a flake. There was a plant wired up to a biofeedback type sensor with an audio output. She poked the plant, nothing happened. I petted it, told it it was beautiful, commiserated with it about being on display for people who didn't care. The audio output was purring. The plant liked me.

I`m another person in a big, nasty urban area with a small garden that takes up my entire backyard. We fantasize about moving somewhere to get a bigger piece of land out in the country (maybe once my kid is settled in college and my husband gets rid of his business), or maybe just in the meantime buying another plot of land to put some fruit trees on (I am totally at capacity right now, filled to bursting, no more space for trees). I have one similarly nutty dog and two rabbits, who make excellent manure and have become an essential part of my garden. I never really thought I had space for them but they turn out to fit in perfectly (they have their hutches and spend dry days in runs in the garden, eating the weeds on the paths and generally just hanging out, jumping around, DIGGING HOLES [how could i forget, it's their favorite activity], and napping).
Sebastian Köln
Posts: 551
Location: Abkhazia · Cfa (humid subtropical) - temperate · clay soil
61
I like...

what are your requirements?

Right now we have a cat and a dog, with plans for bees, ducks and goats (once the garden is really well fenced off…). The neighbors have pigs who love to dig in our garden and cows who love to graze there. There are horses around too.
(More details here)
Flora Eerschay
pollinator
Posts: 251
Location: Poland
91
I like...

posted 11 months ago
Hello everyone, and thank you for your warm welcome! I must admit that I forgot forums after the last one died (about sighthounds - which my dog is). But I will like it here!


Tereza Okava wrote:I have one similarly nutty dog and two rabbits, who make excellent manure and have become an essential part of my garden. I never really thought I had space for them but they turn out to fit in perfectly (they have their hutches and spend dry days in runs in the garden, eating the weeds on the paths and generally just hanging out, jumping around, DIGGING HOLES [how could i forget, it's their favorite activity], and napping).

Ooh that's what I want to have! I imagine that one would be albino with standard coat (there is a super hardy breed which was bred for meat and white fur), and the other would be a black angora (their long coat is actually greyish, but face is short haired and black). They would look so cool together! But I heard that it's not so easy to make them like each other... both must be young (at which age it's hard to determine sex) and preferably male and female, spayed/neutered if you're not planning to breed them (I'd love to, but not where I live now).

I even made a collage to visualize how they would look like - background is a photo of my garden. I'm also worried that the angora would need too much grooming... not that I'm lazy but I imagine the horror stories of matted wool getting overlooked and nasty... 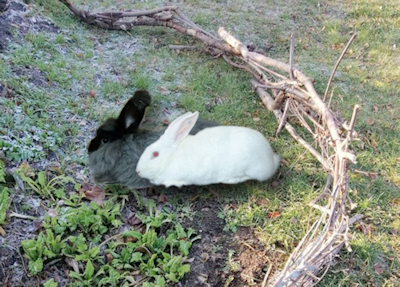 posted 11 months ago
Welcome Flora, I like your collage!  It is like a vision board or dream board - if you visualize it, you will achieve it!  Sometimes the first step is to articulate the vision, and then you know what you want to work toward.

posted 11 months ago
I thought the same thing about the vision board!
I was also on a sighthound forum years ago, when I had a whippet (skinnydog). Practically a lifetime ago!!!

I was hoping to have two bunnies that would enjoy each other's company but I didn't realize that bunnies came with their own personalities (and it turns out the one really isn't too friendly with the other. but that's okay.)

I love your woven fences. What are you growing in your garden?
Flora Eerschay
pollinator
Posts: 251
Location: Poland
91
I like...

Tereza Okava wrote:I was hoping to have two bunnies that would enjoy each other's company but I didn't realize that bunnies came with their own personalities (and it turns out the one really isn't too friendly with the other. but that's okay.)

There is a method that worked for many of my other animals, but I never tried it on bunnies: make them have a "bad experience" together. For example, put both in a transporter and take them for a ride on a bumpy road, to a vet, to some scary places, etc. When they return, they're very likely to be best friends! It works on humans too. Actually, it's a plot of many movies

in which two enemies go through some trouble together and they're friends in the end.
I learned it from my horse riding trainer, who always did this when two horses didn't like each other. He'd put them in a trailer and take them on a crazy ride

they'll come out terrified but BFF.


I love your woven fences. What are you growing in your garden?

Food! Or, I'm trying. Seems like I killed all my pitaya cacti when I moved them to new pots

I don't have a proper sand for them, to mix with soil. I grew them from seeds from a fruit and they were developing so nicely

now I'm just watching them die one by one and I'm helpless. They're in the house of course. Outside, I have wild roses, pumpkins, topinambur, wild strawberries, berries, pears, mulberry, some leafy edibles etc. Whatever grows here (it's zone 6 I think...) but the garden isn't very big and I don't have animals that would provide more fertilizer. In spring I'll take wool from my cousin who has sheep and I'll use some for spinning (I have a support spindle) and the rest as mulch (the wool is a waste, so they don't care much for quality but I always find some nice parts, and the dirty stuff is great as mulch).