J Wynne
Posts: 2
posted 11 months ago
Hi.. I would appreciate any help or advice.

I am currently in Southern Ecuador introducing permaculture to families here. They live in the mountains and many work on lands over 50% slope.
Currently many of the families are only planting corn here so I want to introduce them to the three sisters...

However on the steep slopes there is a large problem with water retention and run off.
At first I wanted to introduce swales but have read that on steep slopes they are not a viable option.... We are a team of two working by hand so large scale works are not an option. (impossible for machinery to reach some of the land we are working with. )

Any help or suggestions would be appreciated....THANK YOU!

posted 11 months ago
Swales are viable options on steep slopes. Just don’t make them bigger than maybe about a foot deep, but have many of them. The advantage you have here is that if stuff is arranged properly, you can let gravity do your work for you. For example, the Polynesians planted candleberry trees right next to the streams that flowed down the volcanic slopes into their villages, so they would drop the berries, which were used as fuel, into the stream.
I suggest food forest (and just forest) to stabilize the slopes.
Using three sisters is a good start, sunflowers and amaranth are reportedly good companion plants for all of the sisters, as well as being awesome chop-and-drop chicken feed and bird attractors. You can stabilize the corners and right, left and downhill sides of the garden beds with perennials.

The issue of slope stability is a true issue in these slopes! You indicate 50% slope, which translates to around 45° hillslopes. This is way above the stability angle of unconsolidated material, which is usually around 35°. Such areas are usually very prone to landslides, which can be deadly for people living there. I would think well abouth Swales, since what they do is get water into the ground, further weakening their cohesion and thus might increase the probability of a landslide ...
Rene Nijstad
pollinator
Posts: 302
Location: La Mesa, Cundinamarca, Colombia
85
I like...

posted 8 months ago
Water retention on such steep slopes is a big NO-NO. Mostly these slopes found a balance between runoff and infiltration which makes them sort of stable as long as the weather stays within "normal" fluctuations for that area. If you would get an exceptionally wet rainy season the risk of landslides goes up A LOT. Please ask the people living there about these stories, I'm pretty sure they saw a slope or two come down somewhere in the past decades.

General rule of thumb for swales is: only on slopes less steep that 1:3 / 18° / 33% (I hope I got those figures right, I always use the 1:X method when measuring, because that's fast and easy and fool proof :-) ) with as main reason stability. On steeper slopes you can use terracing with retaining walls. Those are a lot of work, more so when the slopes get steeper. On slopes 1:1 you cannot really do much (for every meter horizontal you need to build a meter high retaining wall), except for hoping that you don't get killed in a massive landslide. The pictures below show one on a 1:1 slope. And I have seen WAY worse :-( ...

Since you're dealing with a reality of "this is where poor people live", there might be an option you could try: slopes are seldom totally the same everywhere. Look for areas that are less steep than average, with nobody living right below them (so that if there would be a landslide it won't kill anyone). Generally landslides occur when excess water cannot drain away quickly enough. That builds pressure by weight while weakening the stability of the soil at the same time until the whole or part of the slope gives way, relieving this pressure. To avoid things getting to that point make sure you have an exit channel for excess water. This channel needs to go to an even more uninhabited area! Normally you could use the natural occuring gullies (super eroded in these landscapes) for this. I think people tend to stay clear of those. Like this you can try to build some terraces.

Good luck! People in your area don't have a lot of options so hopefully you can help them improve, even if just a little!
A_landslide1.jpg 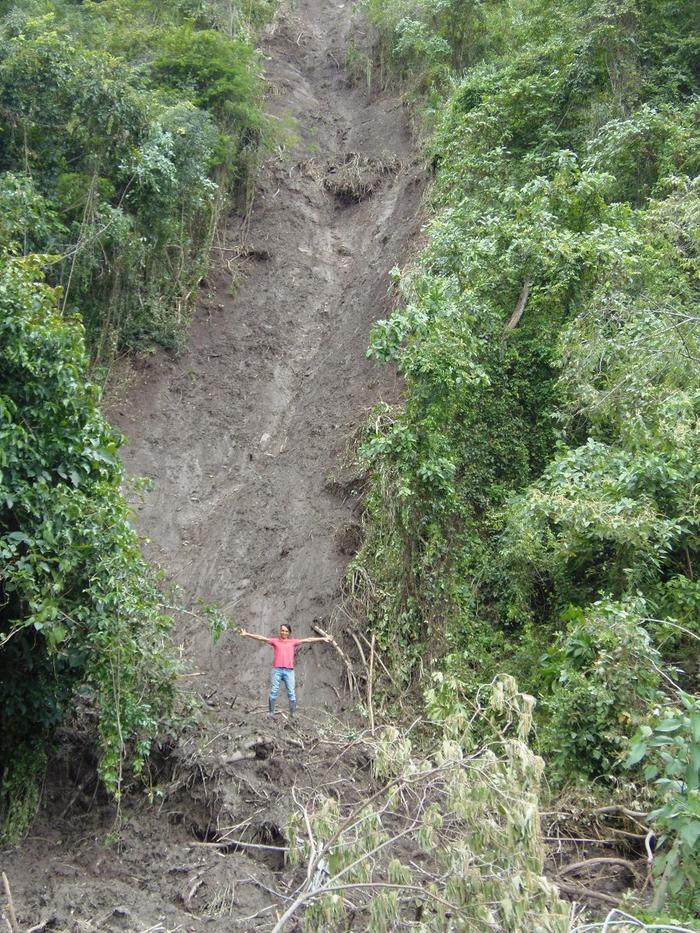 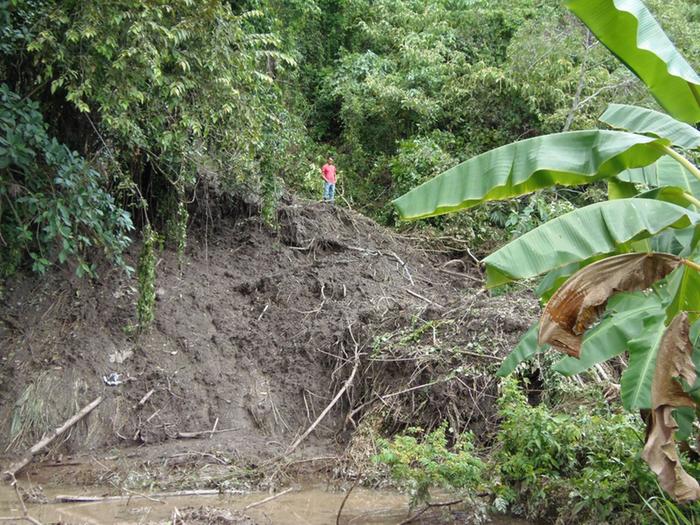 Juan Montes
Posts: 9
Location: Coastal NorCal
4
posted 8 months ago
I'll be watching this thread carefully. I've got 4 acres and more than half of it is hill at similar grades. I've finally started in on working on plantings on a specific hill behind the house after staring at it for a year or so. I started here because of all of the California Bays looming over the house both blocking light and threatening to fall on it, as they do often enough. I understand there's a lot of dangers in altering the landscape too much, either in grade or capturing too much water in the soil. I'm taking a light approach and am following established animal trails, establishing them further with timber from trees I've cleared and rock from the area. Then creating small uphill retaining walls for planting dwarf fruit trees, and filling in here and there with interesting native bushes and other plantings like yerba buena, salal, alpine strawberry, huckleberry, creeping manzanita.

The idea is that not only will the hill stability not be compromised, but there'll be a lot of low maintenance fruits berries and herbs growing--the other big issue with hills is just getting up there to tend to things. We'll see if it pays off. 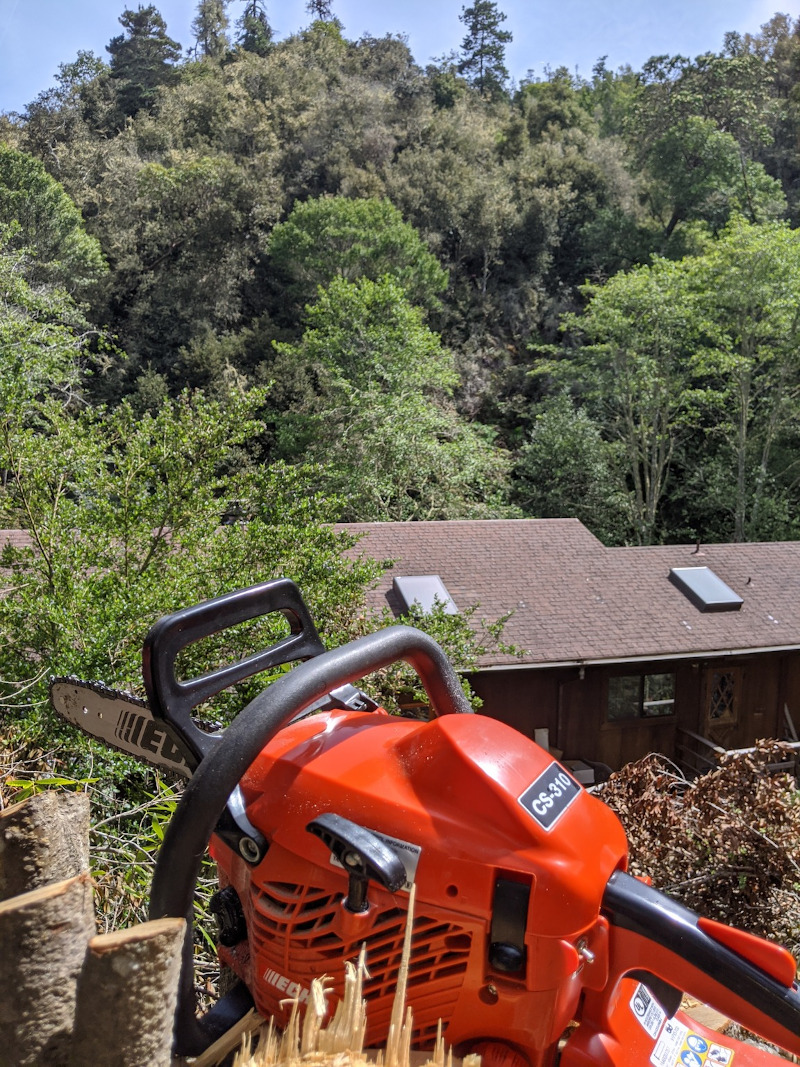 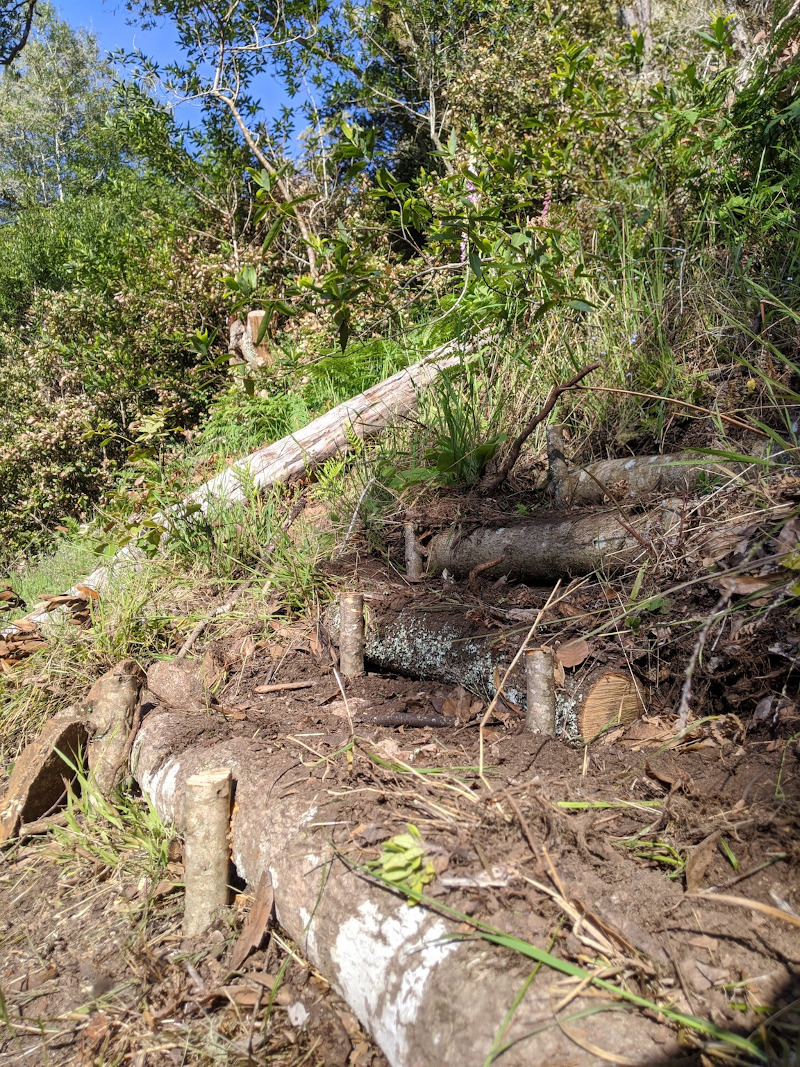 posted 8 months ago
Indeed you have an interesting situation ahead of you.
Can I ask what the # sisters are please?
As I think about your situtation I realise many communities have experience and I can see some ideas are coming along already.
What is the rainfall there ? Because that seems to be one of the causes of land slides.
But when you look at those terraces built in Japan in the photos it will be interesting to see how they are stabalised.

Anabel Fitzmed
Posts: 2
posted 7 months ago
I don’t know if you’ve figured out solutions, but I came across this and thought of you. What I found is a very helpful diagram of working on a slope, which apparently comes from a chapter in a soils book about working on slopes.

Here’s a link to the chapter, in case you are able to source it somehow: https://link.springer.com/chapter/10.1007/978-3-319-75527-4_8
Ellendra Nauriel
pollinator
Posts: 418
159
posted 7 months ago
I'm farming on a similar slope right now. I'm still working on getting things set up, but the plan eventually is to divide the field into horizontal sections about 50 feet wide for annual crops like corn, potatoes, and squash, with a 10-20 foot wide section of perennial crops in between. The perennial crops will include small fruit trees, berry bushes, and vining crops on trellises, as well as things like herbs and clover. The combination of trees, bushes, trellises, and ground covers should help trap the soil runoff as well as stabilizing the slope. Eventually I may add short rock walls to act as terraces to help hold the soil as well. Lord knows I've got enough rocks.

From the air it might look like a topo map, with the horizontal bands following the curve of the hill.

If soil erosion is a serious problem, you may want to adjust the widths of those sections, making the annual sections a little narrower and the perennial sections a little wider, but it should still work.
Russ Cann
Posts: 1
posted 7 months ago
My friend, forget about swales on those slopes. Many people have died in landslides on slopes like that please be very very careful what advice you give others. The key to working those steep heavy clay slopes is contour hedgerows. With inga or other early and mid succession trees to get started. They will stop erosion, give you mulch for the corn to cycle nutrients and over time if you also plant vetiver or lemongrass start to form terraces. In the tropics in swales are very delicate because in large rainstorms we can get 8 or 10 inches of rain and it will either wash out the earthworks or cause a landslide that can take lives. You can plant out contour lines at 5 or 6 m and have plenty of room for annual crops and along the tree lines plant out banana and other fruit trees that will add income and food security. Again please be very very careful when you give advice to someone else especially if you have not done it first
Marco Banks
gardener

Russ Cann wrote:Again please be very very careful when you give advice to someone else especially if you have not done it first

This is sage advice.

Be careful, people.  Once a hillside begins to give way, there's no way to stop it.  Long term, I think that creating a food forest with minimal soil disturbance would be best.  An interlocking web of tree roots will not only hold the hillside in place, but will also help infiltrate water quickly.

Take a few years and stand out on that hillside during a few heavy storms --- see what actually happens to all that water that falls.  Get to know your land intimately.  Perhaps there may be some small areas where you could use water capture strategies, but I'd be really cautious about taking an A-frame and a shovel out there and digging swales.

posted 7 months ago
Ecuador is tropical I think, so vetiver would thrive there.

Vetiver is an amazing grass for planting in contour rows on steep land. It’s roots anchor the soil, extending incredibly deep. It slows surface runoff, increasing water infiltration, reducing soil erosion, and building sediment on the upslope side, forming natural terraces for planting. The grass itself can be cut twice per year for mulch. The plant is sterile, so won’t spread by seed and will stay where planted.

posted 5 months ago
My comment about swales was based on the fact that spread and soak systems were used with good results by Polynesians on volcanic islands, which have very, very, steep slopes. I suppose that these might not have been swales specifically, perhaps shallow cut and fill terraces, but I know that they brought water out on contour from streams and it worked out fine for them, so it’s pretty clear that one can indeed do water retention on steep slopes. The Polynesians used the water soak systems to grow trees. Trees do help stabilize slopes. I’m sorry that I assumed that swales specifically were used.