posted 1 year ago
Young plants seem to be a favorite for deer, rabbits, and other nibbling animals. It can be so discouraging to spend a lot of time planting and observing a new plant, only to wake up one day and find it munched to pieces.

Currently I've mainly been using 4 foot metal fencing around younger plants and trees, to keep out mostly deer and rabbits, and have had really good success so far with this.

I'd love to transition though to using a natural fencing/hedge/deterrent for keeping out these critters if possible.

I've had some success with simply planting stuff thickly around them. It seems like the critters target plants that are out in the open by themselves, but if they are tucked in amongst other plants or trees, this greatly reduces the chances that they are browsed on.

I'm interested to see if having some thorny plant material jumbled up in a circle around the plants will help deter rabbits?

What are some natural methods that you've had success with or want to try to keep the nibblers off your prized young plants?!

Leah Nam
Posts: 8
1
posted 1 year ago
After I prune my rose bushes or anything thorny I always put it on top of my compost pile to deter raccoons so I’m sure a similar concept could be used.
Hugo Morvan
gardener

posted 1 year ago
Last year a badger came to my garden and started dragging out my young hazel trees. I put them back, next day they were out again. I planted them in the green house, the badger didn't like coming there, they're still there.
This year i started a small tree nursery under the oaks, and i've planted loads of hazelnuts. The badger comes every day now, he likes to remove the straw and hay i've mulched my paths with in between the vegetable beds, he is looking for worms and hopefully slugs as well . I had to protect my hazelbabytrees and nuts, so i've build a little fence around it, he can't just get in. But it's not enough, he might dig or jump or climb the fence, he might try to bite his way in. I have no idea what they're capable of so i had the idea to use holly as a defense. No idea if it's going to repel him. I'll have to remember to post a picture, because it tells more than a thousand words can.
Has anyone got any idea if it will work against the hazel murdering ferocious evil badger? Or do i have to catch it and kill it? Or is there another preferably natural measure i could take?

posted 1 year ago
BlackBerry canes work for me. I end up getting roughed up a bit checking on my saplings, but they are fine.

Sepp holzer has a weird recipe for bone paste that he swears will deter nibblers from saplings. And when asked how long its effect lasts, he says...years. Am sure if you search the forum, you can find.

bruce Fine
Posts: 1280
75
posted 1 year ago
ive had great luck with just letting everything grow wild around all the trees I planted, I have lost very few even though there is a major deer highway going right through the field where trees are planted, once they get big enough to start producing a crop I will start mowing around them
Wayne Mackenzie
pollinator
Posts: 268
Location: Sunizona Az., USA @ 4,500' Zone 8a
22
I like...

posted 1 year ago
I used chopped up bougainvillea branches for mulch and it most definitely kept the rabbits back. I watched one try to walk on it and I almost felt bad. Problem is the thorns go right through boots or whatever. I finally got tired of being punctured.
Hugo Morvan
gardener 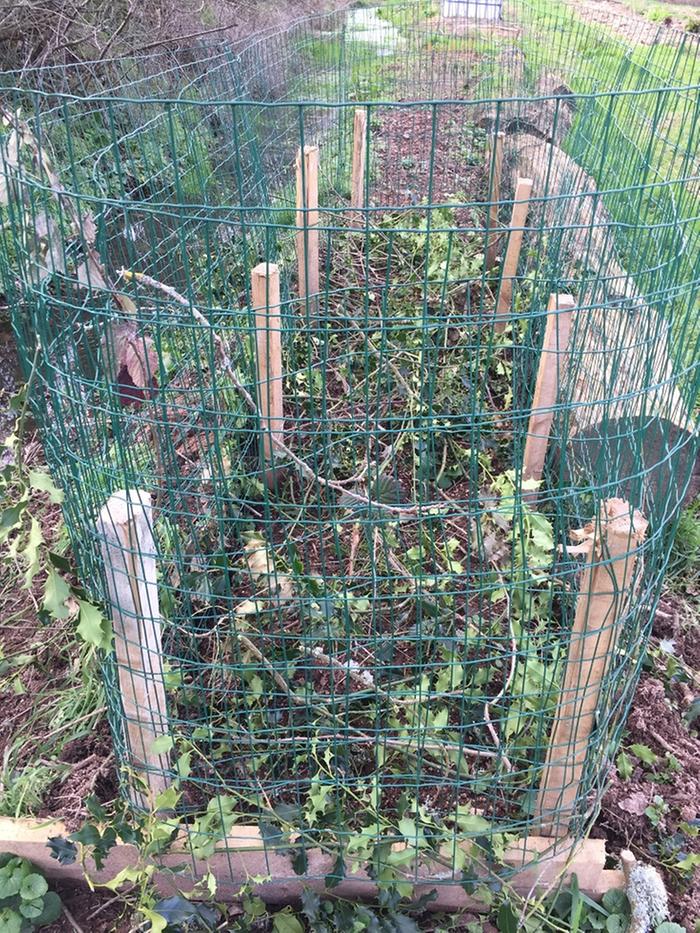 posted 1 year ago
Here is the thread for Sepp Holzer's Bone Sauce.


Here is Paul's remembrance of Sepp's recipe for those who wish to remain on this page.

First you start with a cast iron kettle and bury it a bit and put a cup of water in the bottom. The fill another kettle with bones, put a screen over it and then plop the bone kettle upside down on the other kettle. Then pack clay around the edges to make a good seal. Then Pile up some dirt and build a big fire over the whole thing.


Keep the fire going for an hour or two and then let it sit for a day. Then collect the nasty gunk from the bottom. Apparently this smells awful. Smear a little of this around the trunk of any tree and animals won't ever touch that tree.