Has anyone built a Trommel for sifting compost?

Adam Dettman
Posts: 17
2
posted 2 years ago
Hey, folks.  Has anyone here put together a trommel for sifting their compost?  I've found a couple videos on YouTube and while they do a decent job of showing the trommel in action they don't spend much time describing its construction.  Namely, I'm curious what people have learned about incorporating electric motors.  My assumption is that a 1/4 hp electric motor would be of adequate size..?  Further, can anyone point me to an "Electric Motors For Dummies" website and/or forum that they've enjoyed?  I've never worked with electric motors.  While they don't seem terribly complicated, I'd love to read thru an introduction (re: belts, pulleys, shafts) before I get started.  Thanks for your time!
greg mosser
gardener

posted 2 years ago
i haven't seen the videos. what are you planning on making the body of the trommel from? i would the think the strength of the motor needed would be different depending on the weight of the materials being used. i would also expect it to need to be pretty strong if it's not going to get bogged down (or having the belt slip, depending on how you're rigging it) from the weight of the compost.

one of my partners at our nut processing facility made a trommel, mostly from different sizes of hardware cloth and pieces scavenged from plastic barrels, to sift cracked nuts into size classes. the main problem it runs into (aside from dealing with fiddly cardboard baffles in important places that always come undone - this is a very mk I mock-up) is getting weighed down with too much material. there's a real need to regulate the feed going into it.

i have seen a large-scale mulch-trommel in action at a local mulchyard while driving past - it's about the length of a schoolbus. i'm guessing you're looking at a somewhat smaller scale?

posted 2 years ago
I've never built a trommel, but I will be.
I had the hardware cloth  and I just picked up some bicycle rims.

Electric motors are another thing entirely.
I am an electrician,  but I have always followed the plans given to me, so I don't know much about sizing,  etc.
Well,  I do know you want  single phase motors only.

My own plan involves a cheap electric drill , and a belt drive.

posted 2 years ago
Hi Adam;
Not sure just how much volume your thinking of? But they make some pretty large homeowner models.
Here's a link https://mantis.com/compare-mantis-composters/
All hand crank, but anything can be modified to run with a motor.

posted 2 years ago
Here's one made from a cement mixer.
He seems to like how it's been working.  Pretty informative.

Jeremy Fielding's channel on youtube is pretty good for repurposing common electric motors.
Here's one of his videos.  https://youtu.be/SrPHQh-M3pM

thomas rubino wrote:Hi Adam;
Not sure just how much volume your thinking of? But they make some pretty large homeowner models.
Here's a link https://mantis.com/compare-mantis-composters/
All hand crank, but anything can be modified to run with a motor.

Thanks, Thomas, but rather than a compost bin I'm looking for information on how to put together a compost sifter.  I collect compostables from the local food co-op and so my "bins" are rather large and consist of open-top boxes made from pallets.  I turn them by hand and/or with my tractor.  A trommel/sifter, though, would allow me to sort out things like twist ties and labels (unfortunately the folks at the co-op aren't particularly thorough when sorting their compost) as well as larger, not-yet-composted materials.  Roughly speaking, it's a drum that lays on its side and whose sidewalls are made of hardware cloth or something similar.  Typically it's turned by a small electric motor although hand-cranks versions are also common.  Thanks for your info though!
bruce Fine
Posts: 1337
80
posted 2 years ago
on electric motor, I have a cement mixer something like the one in video, it has a 1/2hp 1750 rpm motor.. electric motors are most common in either 1800 rpm and 3600 rpm, the 1800 or1750 rpm motor has twice as much torque as a 3600 rpm motor of the same hp rating. little pulley on the motor, large pulley on the drum.
Keith Odell
pollinator
Posts: 124
Location: Indiana
23
4
posted 2 years ago
I don't have pictures available now but I made a compost/worm sifter.  Frame is wood with old shop vac wheels for rollers and mine sits on a tote.  Sifter is a 5-gallon bucket with the bottom cut out, bucket is split into top and bottoms halves and then the hardware cloth is wire tied securing it to the bucket halves and to itself to form a long seam/overlap.

It is oriented slightly downhill - bottom end wheels higher than top end wheels.  I put the compost in the bottom and hand spin.  Compost, cocoons and smallish worms drop onto a tray.  Chunky stuff and larger worms flow out the top into a container.  Rough sifting harvests about a gallon every 10 minutes or so.  If I'm concerned about all the small worms and cocoons it doubles the time.

Hope this helps.  I'll try to post a picture tonight.  My sifter is ugly but effective.  I sell my worm compost and this sifting makes the compost look as gorgeous as it is.

Joshua Frank
Posts: 134
10
2
posted 2 years ago
@Keith: I'd love to see a picture of this, when you have time. I can't quite picture it from your description, but it sounds like something I'd like to have.
Keith Odell
pollinator
Posts: 124
Location: Indiana
23
4
posted 2 years ago
front, both sides and the compost.  hopefully they come thru

hopefully these come thru.

Joshua Frank
Posts: 134
10
2
posted 2 years ago
Bummer, they did not come through. I was really looking forward to seeing this thing!
Keith Odell
pollinator
Posts: 124
Location: Indiana
23
4
posted 2 years ago
Don't get your hopes up too high.  I'm afraid the actual pictures will disappoint.

Somebody smart will come along and help me, I'm sure.

Joshua Frank
Posts: 134
10
2
posted 2 years ago
Well, I don't want to frame them, just steal all the best ideas, so I don't know how much the quality would matter 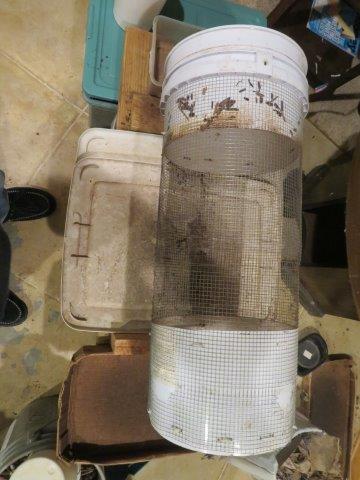 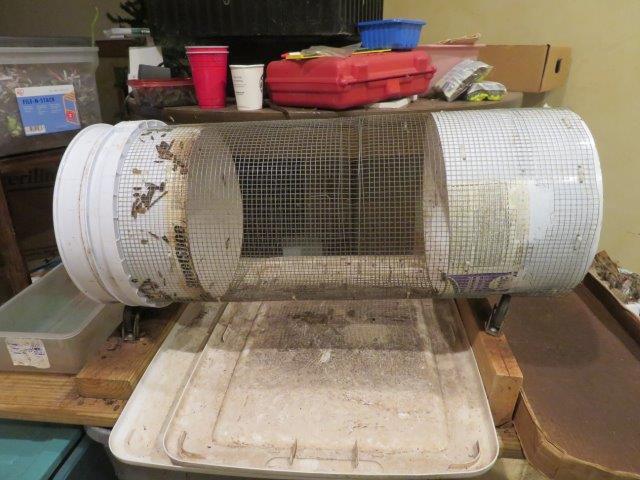 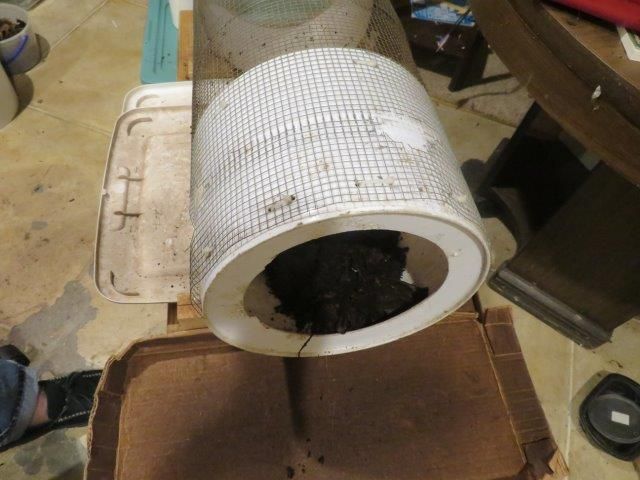 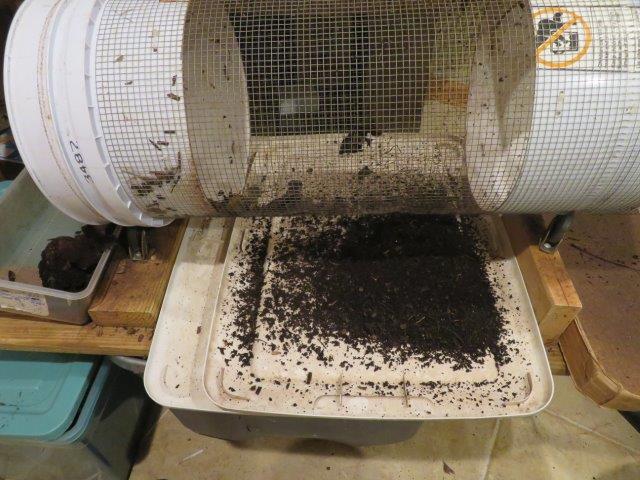 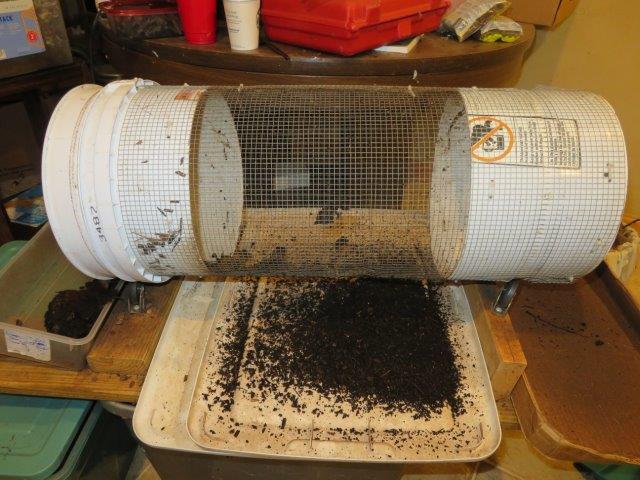 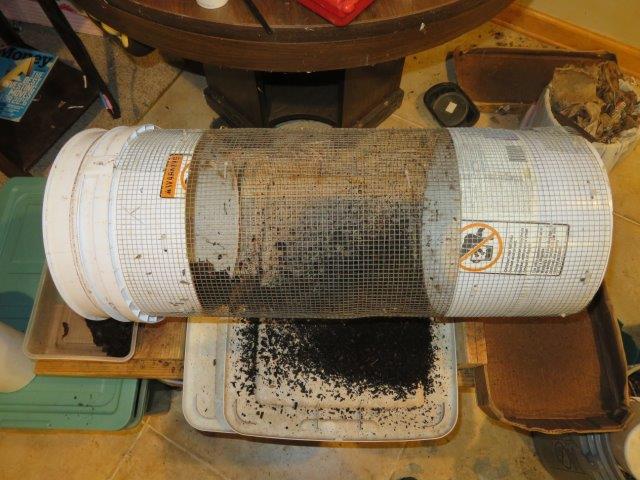 posted 2 years ago
How much material are you really talking about?

Do you need something motorised, or would a cheaper/simpler setup do the trick? This video is a good explanation of different manual sifting setups.

posted 2 years ago
I like the manual sieve vs. the electric from what I've seen in use.  The mechanical ones seem less efficient at getting all the small stuff, and they don't seem like they work any faster than manually running the compost over a screen.  I coincidentally made a sifter like the one in the video.  I acquired a section of floor joists from a job I was on that they were throwing out due to a remodel.  It was 2" X 6" X 8' with 2" X 4" cross beams placed in the middle.  I was thinking of turning it into a raised bed originally, but then I needed to sift a ton of composted wood chips, so it got turned into a compost sifter.  It worked really well, sifted probably thousands of pounds of compost, and was lot of manual labor to do.  Unlike in the video above, I used 1/4" hardware cloth attached to mine.  It's incredibly inefficient to use if the material is wet at all, in fact, I'll only use it if the compost is almost dry.

Basically just lay the sifter over where you want the compost, dump a few buckets/garbage cans full of material on the screen and work it in by hand (not too full, just enough to cover the surface of the screen with about one inch or so of material per sifting cycle.).  I don't think turning the bucket upside down would work on my rig, because the hardware cloth isn't as rigid as his heavier gauge steel mesh.  Mine has waves to it where there are cross supports (if that makes sense).  I just use whatever I have laying around as "feet" for it if I need it raised off the ground.  Clamped to a sawhorse, or on top of a garbage can, or whatever.  I don't want the hassle of dragging around one with feet, or finding somewhere to store it.  As it is now, it just lays against a back fence in the yard, pretty much out of the way and not taking up any space that I'd miss anyway.  It's a little heavy but if it were made just out of 2X4's it would be a lot lighter.

No moving parts to break on this setup, no power consumption, easier to store, no need to maintain it other than repair the screen if it starts falling apart (which after using mine to sift a lot of material I have not needed to do yet).  In my opinion it's a way better way to go.  The motorized type seem like they're more fun to use though!  :)

Thank you for the pictures. How is the handle made and attached that turns the sifter?
Keith Odell
pollinator
Posts: 124
Location: Indiana
23
4
posted 2 years ago
I didn't make a handle for mine, I use the ones I was born with.  I usually just use my open hand on it to spin it but also grab the right side opening if I overload it or to shake things up.

I found a new use for a large mesh lid that I already had after watching the video Michael shared and Joshua's pictures.
I harvested 10 gallons worth in about 10 minutes.

I'll run it thru my rolling sifter to get the worms and cocoons out but the stuff is amazing already.
I've had it for 3 years and didn't use it because it was too difficult.  I should have looked for better ways.

This old dawg learned a new trick.  Better late than never.
Now I'm going to have to figure out what to do with my extra time

Joshua Frank
Posts: 134
10
2
posted 2 years ago
@Keith: How did you attach the mesh to the bucket?
Keith Odell
pollinator
Posts: 124
Location: Indiana
23
4
posted 2 years ago
White zip ties.  I've seen people use bolts, washers and nuts by themselves or with metal strap.
I had zip ties so I used those.

Mine is about 9 years old and some of the mesh (hardware cloth) is starting to break up.
I'll probably wait 'til it goes completely and then just re-mesh it and go on.