fraser stewart
Posts: 8
5
posted 5 days ago
I have built and am currently testing my RMH. I have used some ideas from Matt Walker on stratification and Peter Van den berg for the core. I will probably be using half barrels for the final install. But for now i am testing with a whole barrel.

Everything is looking good, however the T shaped pipes i used to conect the rocket heat to the barrel is dripping alot of water. I guess this is due to condensation. I am hoping it wont do this when insulated.


But i wondered if this is normal and if anyone can give advice.

posted 4 days ago
Hello Fraser and welcome to the rocket mass heater forum,

Speaking from my own experience of dealing with condensation too, I can offer a few suggestions for you.

Water vapour is a part of wood combustion, a very normal thing, but the trick is not to allow the exhaust gasses to be low enough to reach the dew point otherwise it does exactly what your experiencing. It helps to look at this chart to see the dew point temps in relationship with the water contained in the wood your burning.
Dew point chart

You are right in that it shouldn't produce much condensation (if at all) that won't naturally evaporate and be swept out with the rest of the exhaust when the flue temps are higher when it is insulated.
If you have some insulation to test this theory give it a go.

The exhaust pipe exiting my workshop used to produce a lot of condensation too until I wrapped it in rock wool then also with another protective covering. Problem solved.

Good luck with your experiments and keep us posted of your findings..... after all, its rocket science!

That looks like creosote...and creosote is flammable in adequate quantity.
Creosote is a product of burning at too low temperature.
Airtight stoves (pre catalytic) are frequent sources of house fires from as little as two weeks of creosote buildup
On a rocket mass heater my understanding is....there is very little airflow control ..the intent is to burn a fire as hot as possible and absorb all the heat into mass.
If you have airflow control....you need to;
Arrange for creosote to flow back into the firebox.
Once a day burn the fire as hot as possible to burn off creosote.
If creosote is forming in your mass stop using it until you can get the fire hot enough to stop forming creosote!  Everything should be consumed (including vapor!) by the top of the riser.
Chimney fires are the result of accumulated creosote.
Since most people use galvanized ducting rather than chimney in their mass, a fire in the ducting can result in toxic gas, the intent of the barrel is to cool the gasses to where the galvanized ducting won't off gas.
A lateral run can accumulate a remarkable quantity of creosote, certainly enough to burn completely through the ducting, if your mass is made of cob, the straw in it will light and smolder.
Most people who die in fire perish from smoke inhalation...frequently never waking to the danger present.

Nothing is foolproof to a sufficiently patient fool!

I hate people who use big words just to make themselves look perspicacious.

posted 4 days ago
Hi Fraser;   This is normal. Make sure your burning dry wood.
As Gerry suggested get some insulation on your pipes . They are shedding heat faster than you can make it. Your exhaust is to cold.
Get some mass and insulation and your rocket will start working more like it should.

Fraser made no mention of seeing smoke coming out the stack which would indicate that his burn was for the most part clean.
My understanding is that creosote can only form when the burn is poor due to choking down the fire and letting it smoulder, burning wet wood, certain species of wood more prone to creosote production etc.
Having operated a rocket mass heater now for over 5 years and experiencing the heavy condensation myself then having it go away once insulated has never produced any creosote that I could see in the stove or chimney pipes before or after.
Seeing as how Fraser is just getting his new lab coat dirty, lets allow him to discover what being a rocket scientist is all about through experimentation and having fun learning first hand.

posted 3 days ago
Fraser, I suspect there's a flaw in the prototype you've built so far. In order to maintain a good gas flow one need to provide lots of space for every change in direction. 150% of system size for a 90º bend, 200% for a 180º bend. The reasoning is this: friction is killing the gas flow which is absolute necessary for the correct functioning of the afterburner.

It's unclear what system size you have there, but to name a few pinched spots: the space above the riser, known as the top gap.
You don't show any picture of the front, but I think the core is placed reasonably low. In case the core is too close (just a couple of inches) to the back wall of the barrel this will be in combination with the 80º direction change another pinch point.
The T behind the 1st barrel is a double friction point, in the sense it's a 90º bend but also the closed end of the T. In that end is a weak vacuum, slowing down the stream.
And last but certainly not the least: it would be much, much better to have that 2nd barrel coupled to the 1st without an intermediate stove pipe in between. OR, just assuming this might be impossible for whatever reason, just a straight pipe of a much larger diameter. When completely open to each other, those barrels will act like one larger bell of a funny shape.
This is what I built in a couple of instances and it worked beautifully. There's are examples on the batchrocket site, the bell with two-sided blind ended bench and the Mallorca build.

fraser stewart
Posts: 8
5
posted 3 days ago
Thanks alot for all the answers. I have had a chimney fire at my old place. But with a wood stove. I learnt alot and invested in double insultated pipes which were straight. The theory for those reading this goes that the gasses need to stay warm as they exit interior to exterior space. If they cool down too fast they become creasote.

As for damp wood. I am in The Netherlands so everything is damp.
I have a tool for checking the moisture content and this wood is newly bought, (marktplaats, for peter haha).

I appreciate the warning of death and fiery end but i am testing it out before any installation.

The rmh i built produces no smoke. Only steam.

Peter i have another barrel ready but i had to burn it to clean so was doing it one at a time, due to not wantkng to get the police called by my neighbours. They do that sort of thing around here.

I dont fully understand what peter wrote about angles.
I will read through what he wrote later after i get off work. 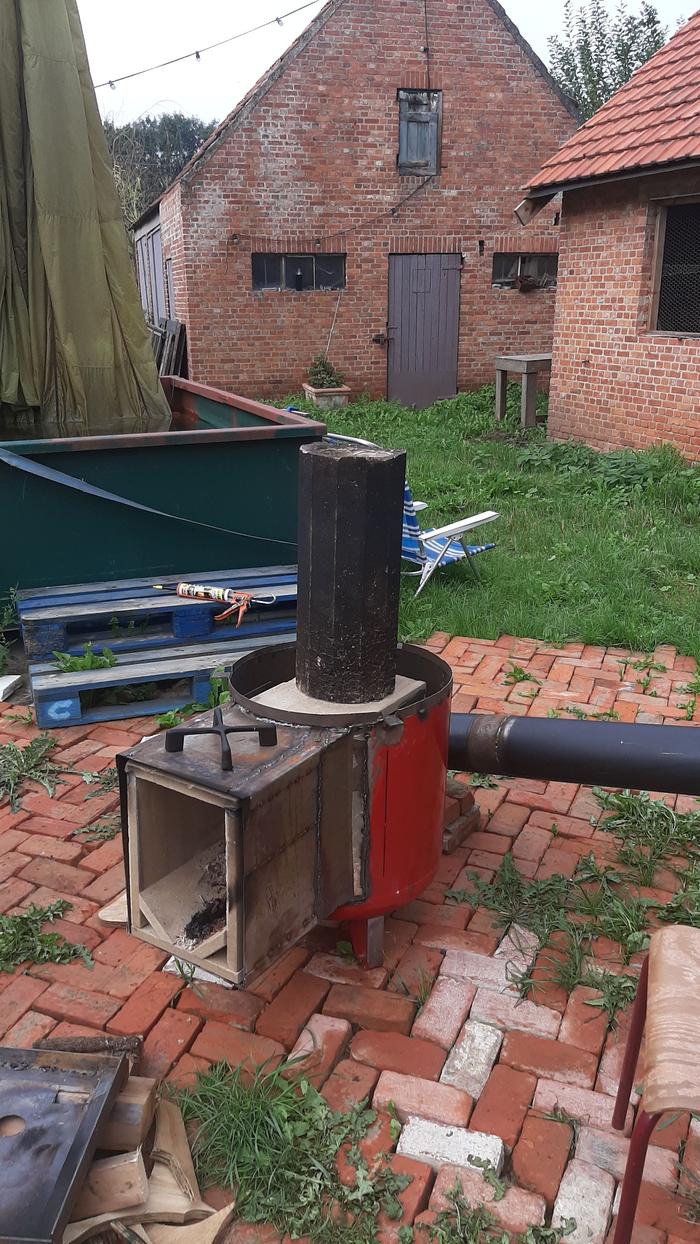 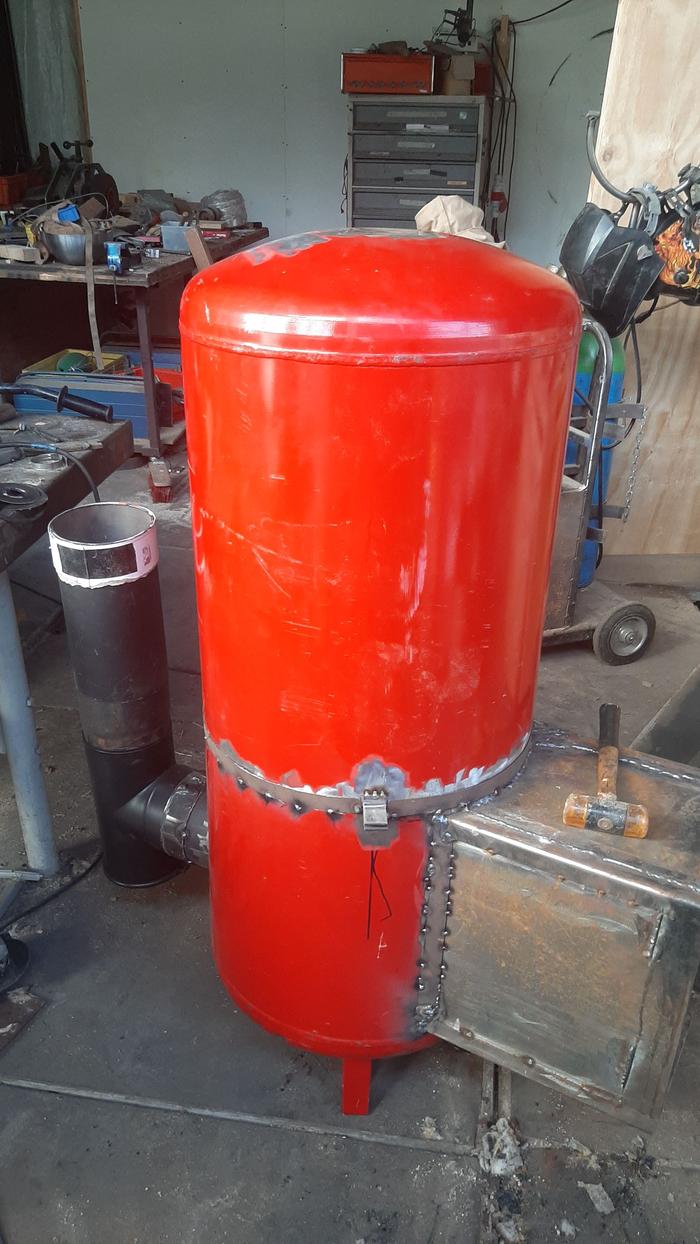 But question: will secondary air intake help with hoter burn.
Can someone let me know what it adds. I know oxygen and perhaps cleaner burn but please share oponions
Gerry Parent
gardener

posted 3 days ago
Fraser,   Peter has explained the function of P-channel and floor channel at his website Batchrocket.eu

A short answer is.
Without the secondary air you are not reaching batch temperatures.
The air supplied by the secondary is what creates the double rams head flames in the riser.
Consider it like a turbo on a hot rod car.  The fresh oxygen is being injected thru the port with the flames and creating a flame vortex!

Read all about them at Peters and Matt's sites.

Thanks again for your input. So nice to post and get info and tips.

So here is the idea. I wonder what you all think about it.

Inwant to eventually build the rmh on my dutch barge. The secondary are will come from under the floor. I hope that by using this it will suck air from the bildge. (Space under the floor and the steel) i hope this will dry it out and ensure a nice dry bilge.
If interested check

I dont know any examples of rms on a boat but i hope this with work.

Let me know what you think.

I am testing it out so please let me dream big. 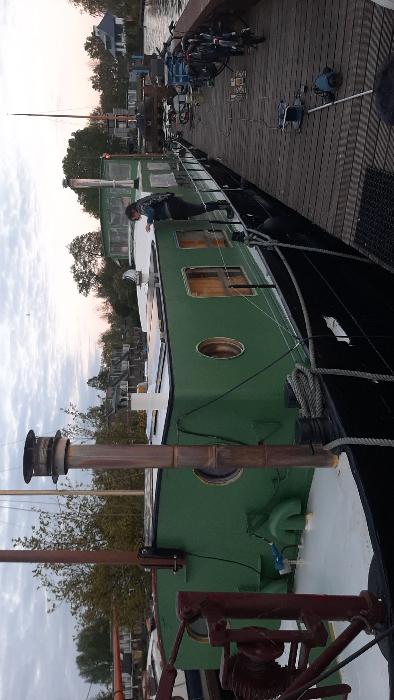 fraser stewart
Posts: 8
5
posted 2 days ago
The first chimney is not for the rmh. But further back you see the insulted pipe which is currently for the wood stove. This will  e doe the rmh.
Gerry Parent
gardener

fraser stewart wrote:I dont know any examples of rms on a boat but i hope this with work.

I know Matt Walker has experience working with both rocket stoves and boats. Perhaps if you contact him, he'll give you some pointers.
Walker Stoves 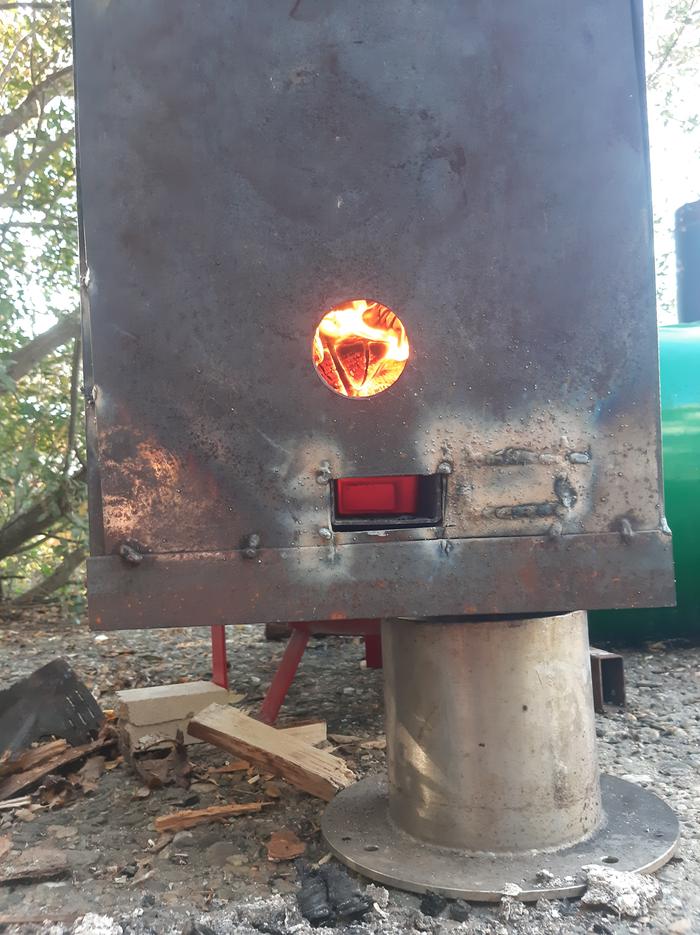