reducing cell phone radiation: an app to automatically turn airplane mode on and off

posted 1 year ago
I need to keep my cell phone on me in case there is an emergency text or call.

At the same time, I do have some concerns about all that cell phone yuck (emf).

I wonder if there might be an app that will activate airplane mode for four minutes, then turn it off for 20 seconds, and then repeat forever.  This would mean i would get notified about two minutes later (on average) of texts and calls.  And it would reduce the yuck by more than 90%.

Anybody know of such a thing?

posted 1 year ago
If you have an iPhone you can use shortcuts and automation. Here's a script I just tested and it worked for a few loops. This will run for 12 hours. I included wifi because the Airplane Mode only turns off cellphone. If you're not using wifi, you can just remove both Wifi actions.
IMG_1687.jpeg 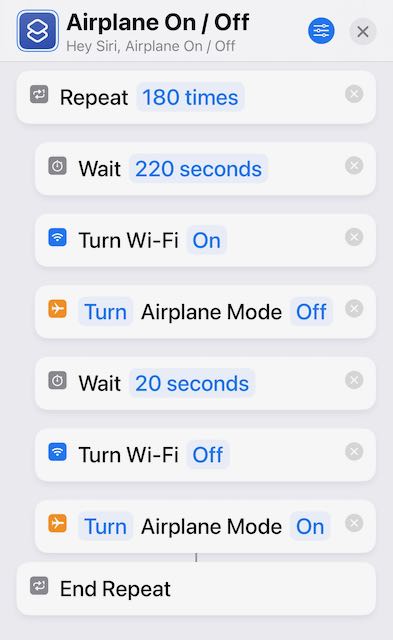 posted 1 year ago
The radiation is something I've been thinking about a lot lately, too. I rarely ever put my phone to my ear, preferring speaker or text, even before I knew about the radiation. But, I'm always looking to get rid of apps, lol. So, I've been trying to figure out an effective barrier of some sort. The difficulty there is in figuring out what can contain it. Maybe an app is the better solution - but, I'm on a samsung...

posted 1 year ago
I think it was the nutritionfacts.org channel had a video on cellphone radiation, and if I recall they cited a study that there is a 30% increased incidence of brain tumors on the side of the brain that is the persons primary hand, with the correlation that people usually hold the phone to their head with their primary hand so perhaps it is related.

From some work-related classes: a cell phone will increase power output when it has a weak connection to a cell tower so you want to avoid any physical materials which would block the internal antenna from that connection. Otherwise it increases the power output to attempt a better connection and just uses up the battery faster and in some cases can even cause the phone damage due to heat.

I try to avoid using the WiFi or bluetooth to save on battery use and from cooking my hip while it's in my pocket. That script looks great! I've never messed with that before and will be using an Android model phone so I'll have to see if there's an equivalent script. I would check to see if powering on the antenna causes an initially higher signal use as it connects to a tower, and what the check in time is after that to be sure that window is long enough to download data.

posted 1 year ago
The physical barrier I am thinking of is simply between me and the phone, while it's on me, so it can still get its signal. I try hard not to carry it close to my body, but that's not always feasible.