Joel Hollingsworth wrote:
I think the language that included a name for them has gone extinct, along with the larger system of agriculture they were a part of.

Hydraulic albedo/thermal-mass season extenders? It might be worth thinking up a new name.

What did they look like? What were they made of?  I missed the show but think I would have enjoyed it.
Ken Peavey
steward

marina phillips wrote:
I made what I refer to as a "redneck greenhouse" by making a rectangle with straw bales and covering it with a pick up bed topper.  Put buckets of water in there too. Worked well enough to keep my baby seedlings alive through some very cold weeks in April.  An unexpected problem was rodents chopping down seedlings like they were trees!  So we took everything out and lined it with chicken wire, and that stopped that.  Man, was that frustrating though!  They didn't even eat them, the baby plants were just felled like little trees and left there.  !!!

This sounds more like cutworms than rodents.  If the problem persists, try a plastic, fine screen or fabric ground cover.

Scott Reil
Posts: 179
Location: Colchester, CT
1
posted 12 years ago
It's a couple hundred years out of style but what about hotbedding over manure? Too intensive?

Anonymous
Posts: 0
4
posted 12 years ago
Ken, while I'm not exactly arguing with you, I present this evidence:  I found a hole in the ground in the middle of the bale square, and I put a spring mouse trap with cheese next to the hole (before we moved the whole thing) and there was definitely a squished rodent in there the next morning, with no damaged plants.  And then the next day, more toppled seedlings, untouched trap.  Smarter than I thought.....so we did the chicken wire bit.
Ken Peavey
steward

Posts: 2482
Location: FL
122
posted 12 years ago
I'll have to concede that a mouse would be strong evidence supporting your case.

Posts: 2449
Location: Cascades of Oregon
450
posted 12 years ago
Scott,
I'd like to try the French style berming up of a hot bed with manure but my raised beds are too close to try it right now. But from what I have read it is a very effective extender.

Posts: 2449
Location: Cascades of Oregon
450
posted 12 years ago
Jennifer,
I posted a link about the Titicaca raised beds earlier in the thread basically they would berm up the earth in a low lying area. Taking soil from either side of the bed creating trenches along the bed. Water would fill the trenches and not only irrigate but protect the bed from frost. Continued trenching would replace the depleted soil with fertile soil from the trench.
In addition, reed beds or floating gardens made of reeds and then having fertile soil from the lake bottom placed on the platform would be used for garden beds. Some photo's even show houses floating on reed beds.

Jennifer Smith
Posts: 718
Location: Zone 5
8
posted 12 years ago
Got it now, don't know how I missed it.  Thank you
Paul Cereghino
gardener

Scott Reil wrote:
It's a couple hundred years out of style but what about hotbedding over manure? Too intensive?

gary gregory
Posts: 395
Location: northern california, 50 miles inland from Mendocino, zone 7
5
posted 12 years ago
A local food processor gave away 50 gallon steel drums, I put 10 of them full of water in my 30 foot hoophouse and use them as table bases, so I can grow lettuce and start seedlings in the early spring.  Too hot here in the summer for lettuce.  Rarely gets below 25 degrees here.

Joel Hollingsworth
pollinator
Posts: 2103
Location: Oakland, CA
9
posted 12 years ago
Again, this isn't my experience, but I thought it might be relevant:

I wonder why he doesn't build a square with notches in it, instead of three separate spacers with holes drilled in them. I also think a thinner hoop would allow you to use clothespins. I bet split wood from coppicing could serve in place of the PVC. But the general design looks interesting.

Here's the same guy's design for a cloche made with the sidewall of a tire. I like it better than black plastic mulch.

Julie Ashmore
Posts: 16
Location: Near Molson, North Central WA State, Zone 5a
1
posted 8 years ago
Brenda Groth, I'd love to hear more about how you are constructing your sun traps.

I just started a series of posts about season extension, at http://woodforfood.blogspot.com/2014/03/coaxing-spring-part-i.html. It starts off with simple mini-greenhouses but will transition into the hugel beds / heat capture with tomorrow's post. I'm using deep pits around 5 feet down, filling them with hugelkultur materials, then working to capture the heat that rises out of the beds from decomposition. I'm in North Central WA State. Thanks everyone for the fantastic ideas!

Julie Ashmore
Posts: 16
Location: Near Molson, North Central WA State, Zone 5a
1
posted 8 years ago
P.S. Joel H, it looks like the creator of the blogs you linked to has decided to cash in on his ideas... You have to buy the book to "unlock" his info on the web... Too bad, but thankfully permies.com still has lots of great free info!

posted 1 year ago
My new 'miniature greenhouse', which I showed already in some other threads. It's made out of a toddler play tent and some transparent plastic table cloth. My seedlings are now in there, not on the window sil anymore. They are doing well, while there's frost all nights! 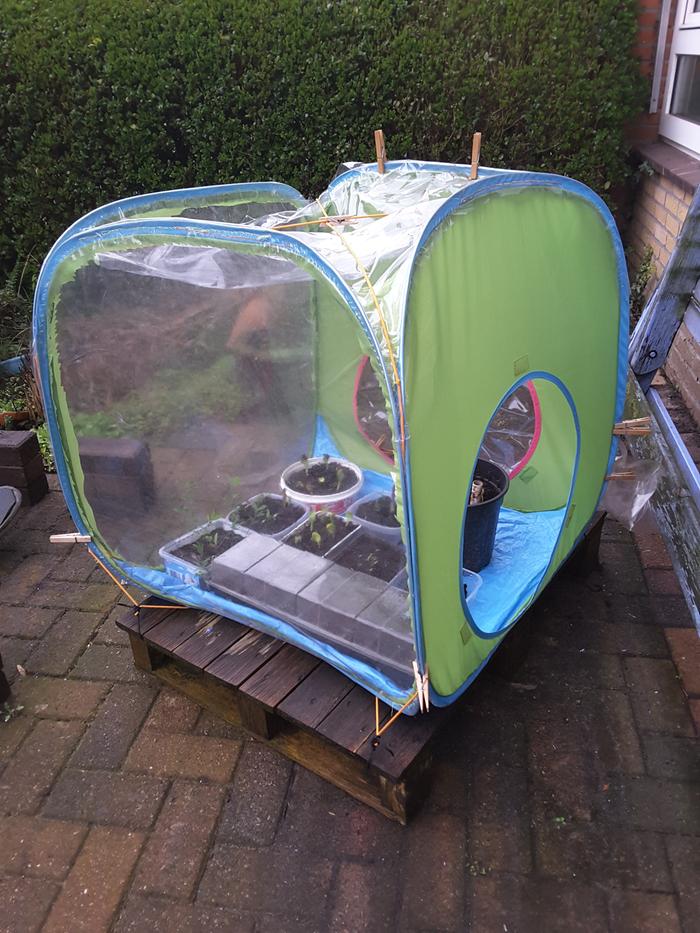