posted 4 years ago
Electrician's snips, or if you like to make fun of a man carrying scissors......they could be called scissors.

Yeah, that's right.  Chrome plated, hard steel scissors.
I was introduced to them when I started installing telephone and data wiring twenty years ago.  They can be bought at Home Depot in the electrical tools area for about $16.  I'd highly recommend the pouch with them, but normally a splicing tool comes with the pouch (which probably would be useful if a person did a lot of grafting).  On amazon you can buy the pouch and snips separate, I'm not sure about Home Depot.  Amazon it's $16 for the snips, and another $10 for the pouch.
Here's a link to Home Depot.  https://www.homedepot.com/p/Klein-Tools-Electrical-Scissors-with-Stripping-Notches-21007/100038995

Anyway.  The pouch is perfect for carrying a little fixed blade "shiv" lol.  I keep mine pretty dull, and use it for prying, and gouging, and really nasty stuff you wouldn't want to use a good blade on.  It will also carry a sharpie, and a pencil (in place of where the splice tool went).  In addition, if you wrap some black electrical tape around it, it'll carry a regular pen and pencil too.

Here's what I do with them.
Prune tree branches (living wood up to 1/4"), cut rubber water hoses, cut aluminum cans up, cut rope, cut drip lines and tubing, cut string, delicate pruning of plants, cut fruits and veggies off their vines, cut out cardboard templates for fabrication, cut rags up (especially if I want them a certain size), open boxes,  clipping a harbor freight coupon, with some skill almost any electrical wire can be stripped with them, and a bunch of other stuff that needs cutting.

As for an idea of their durability.  The pair I'm currently using was used for a few years cutting thousands of copper wires when I was still installing wiring, I used it daily cutting produce when working as a produce clerk for a year (along with cutting boxes with them on the job, and lending them out constantly (people found them incredibly useful for cutting the steel strapping that binds heavy pallets)), and on top of that, I've been using them out in the yard, and on projects around the house.  Nope, they're not as sharp as they were when new, but they still get the job done.

A lot has to do with how they're held.  For delicate work, the normal pointer finger and thumb are perfect.  I like to cut the peppers off my plants using them like that.  If I had flowers, I'd cut them that way too.  (oh wait....I did cut some medicinal flowers with them a long while back......but that's not important right now).
When pruning branches off trees, I'll muscle them entirely in the palm of my hand.  Kind of like I'm trying to impress someone with a strong handshake.  Major leverage using them like this.  I have impressed many a people cutting pennies in half using this technique.......I once saw a guy cut a quarter in half one handed with his pair......but he must have had one crazy amount of grip strength to pull that off.  The pair I'm currently using has cut at least a dozen pennies.

In fact, I'll snap some pictures of my at least six year old, heavily used snips with a cut penny.  I do love to show that trick off.  ;)

Seriously, though.  It's an awesome all around setup.  I wear them constantly, so whenever I'm walking by something that needs a quick trim, it's no problem.  Having a sharpie/writing utensils right on my side is sooooo handy too.  The little shiv is amazingly useful in so many odd ball applications.
I can't live without them now. 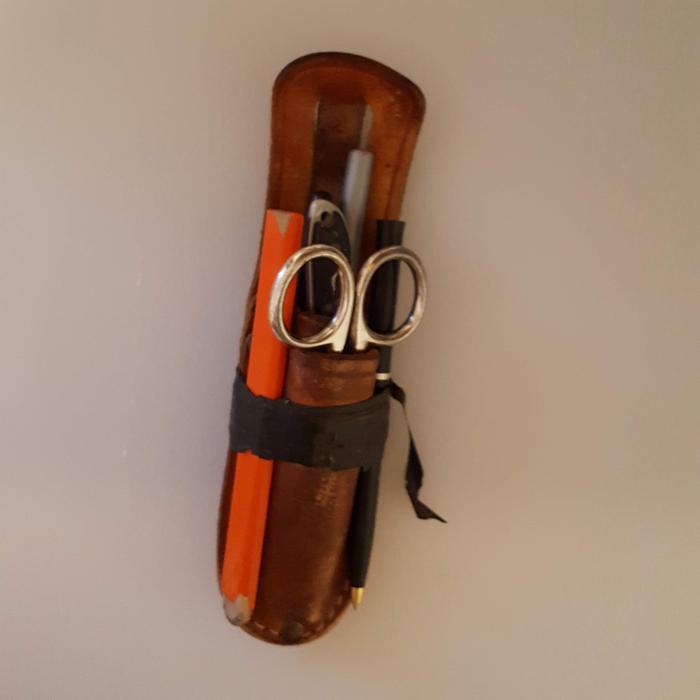 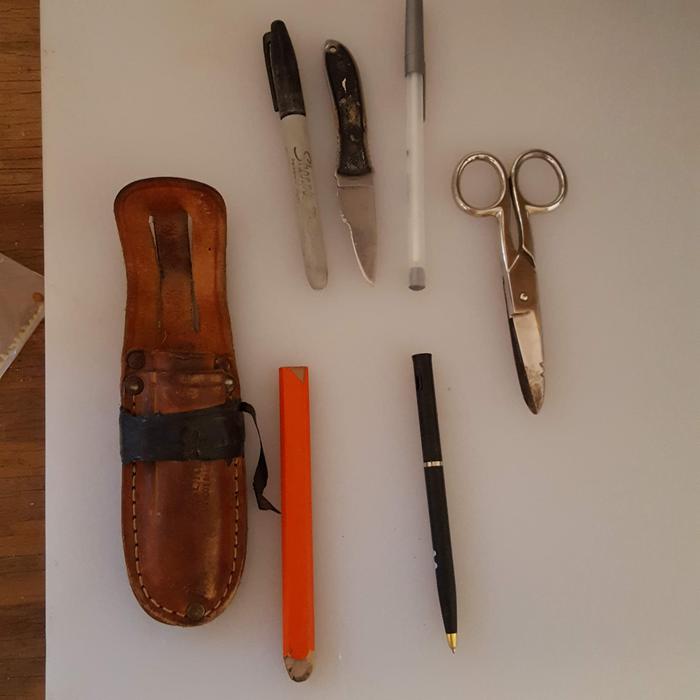 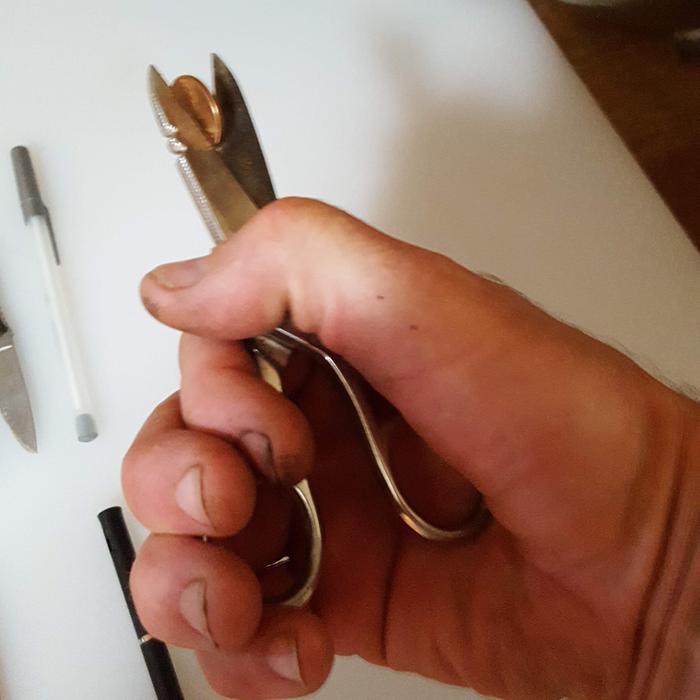 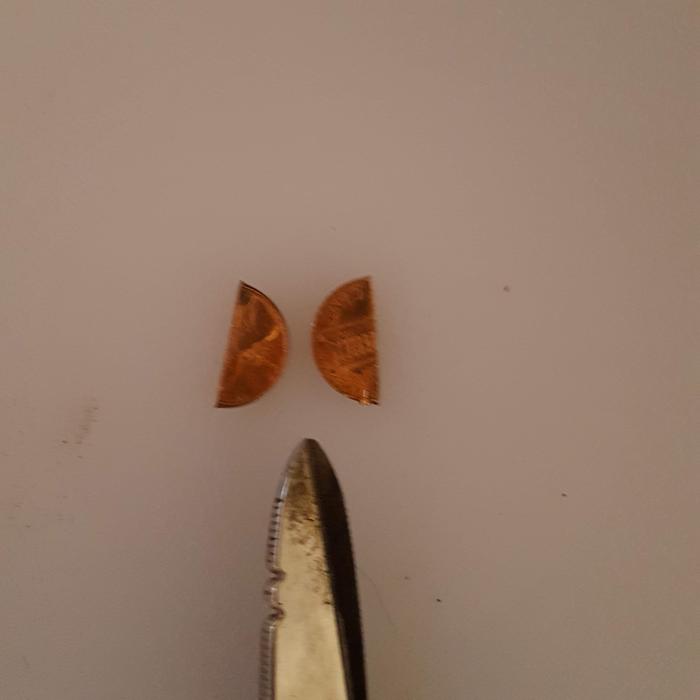 posted 4 years ago
That's a neat tool.  If you'd like we can add it to the Gear Review Grid.  All it takes is another post by anyone (or especially a reply by you) that starts with these magic words "I give this gear X out of 10 acorns".  Replace the X with your score (higher is gooder).

Or if you'd prefer, create a new post that introduces the item and then reply to that with a review.  That would be in case you'd prefer this thread be more of a discussion of how to use this nifty scissors.  Here's a Tutorial on making posts for gear, books, nursery suppliers, etc so that they can show up in review grids.


I'd like to say that they are easy to misplace because they're fairly small.  I know when new guys would start working (when I was installing the wiring) they'd have the habit of using them, and then putting them down on a table, or the floor.  It's easy for them to get lost (or stolen) if you do this.  That's the reason I recommend the sheath.  Get in the habit of using them, and immediately putting them back in the sheath.  The snips are held in very snug, and having crawled through tunnels, and ceilings in some awkward bodily contortions, they always held tight in their pouch.  It wouldn't take much for them to get lost if they were put down on a coarse mulch in the yard.  They're heavy for their size, and they'd sink into it pretty easily.

With a hori-hori on one hip, these snips on the other, and a multi tool of some sort in the back pocket you'd be a gardening force to be reckoned with.  :)


Social distancing since 1975. It's all just sunshine, shit, stardust, and some water.