my pizza stone cracked in the rocket stove oven!

Graham Chiu
pollinator
Posts: 633
Location: Wellington, New Zealand
15
posted 3 years ago
As in my thread on cooking in a 4" batch box, my newly bought pizza stone ( aka unglazed terracotta tile ) cracked wthin 30 minutes of firing up my batch box. Since they're baked at 1200 deg C in Italy or wherever, I am presuming it was caused by differential expansion of the tile.

I know that metal is not allowed in the core, but this is past the riser now where, at least in my leaky stove, the heat drops rapidly after it leaves the riser.  I don't think I would have exceeded 200 deg C as the roof of my oven was a cast iron plate which was also sucking heat out. 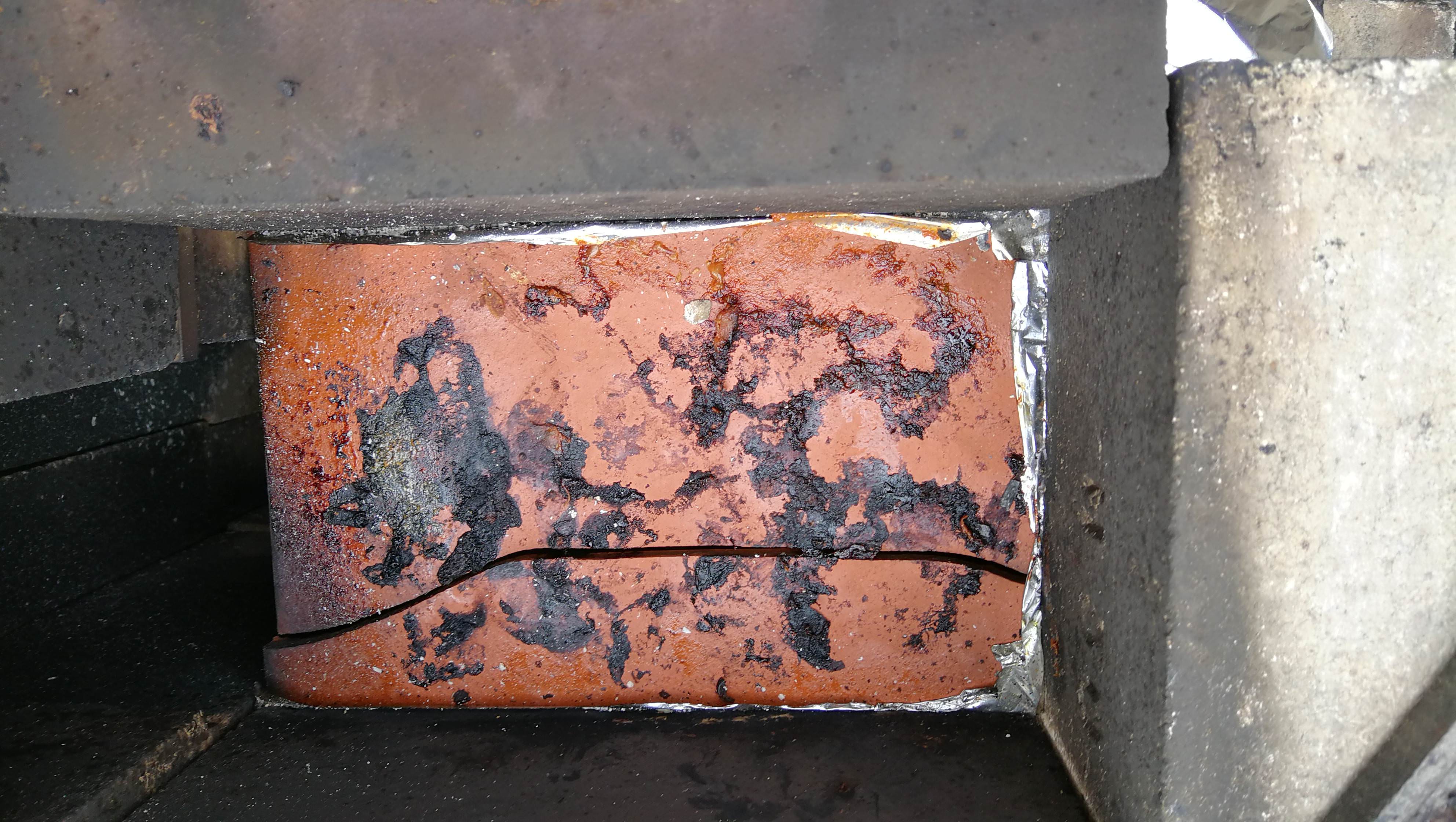 The exit door  ( if the bottom of the riser is called the mouth, what's the other end called?

) of the riser is to the left.  The top half washes over the stone but dead ends.  The other half is under the stone and allows gasses to pass under the stone to the chimney.
Phil Stevens
pollinator
Posts: 864
Location: Ashhurst New Zealand
247
I like...

posted 3 years ago
Yes, it sounds like thermal gradients did it in. You need to use something more robust than terra cotta. The stone you used was probably intended to go in a convection oven where it would heat more or less evenly, not atop a combustion tunnel with 1500 C gases hitting in a small area.

Firebrick splits are the go-to for pizza ovens, and cast refractory "stones" are another option.
Graham Chiu
pollinator
Posts: 633
Location: Wellington, New Zealand
15
posted 3 years ago
The stone I used was probably intended for outside paving!

I wonder if I can add a sacrificial metal deflector plate to stop the gases hitting the leading edge of the stone.
Nicole Alderman
steward

posted 3 years ago
Would soap stone be able to handle those temps?

Since these tiles are baked at 1200 deg C, there must be an ideal way of heating them up uniformly so that they don't crack.

posted 3 years ago
There are many different types of baking stones. Most you find at the store will only tolerate about 400˚F of heat. Baking Steels are the ultimate fancy in high-heat cooking surfaces, but you should be able to find some high temperature cooking stones too. I have some grey looking stones that came with my little steel pizza oven that do just fine above 900˚F. Unfortunately, I'm not sure where to find 'em! 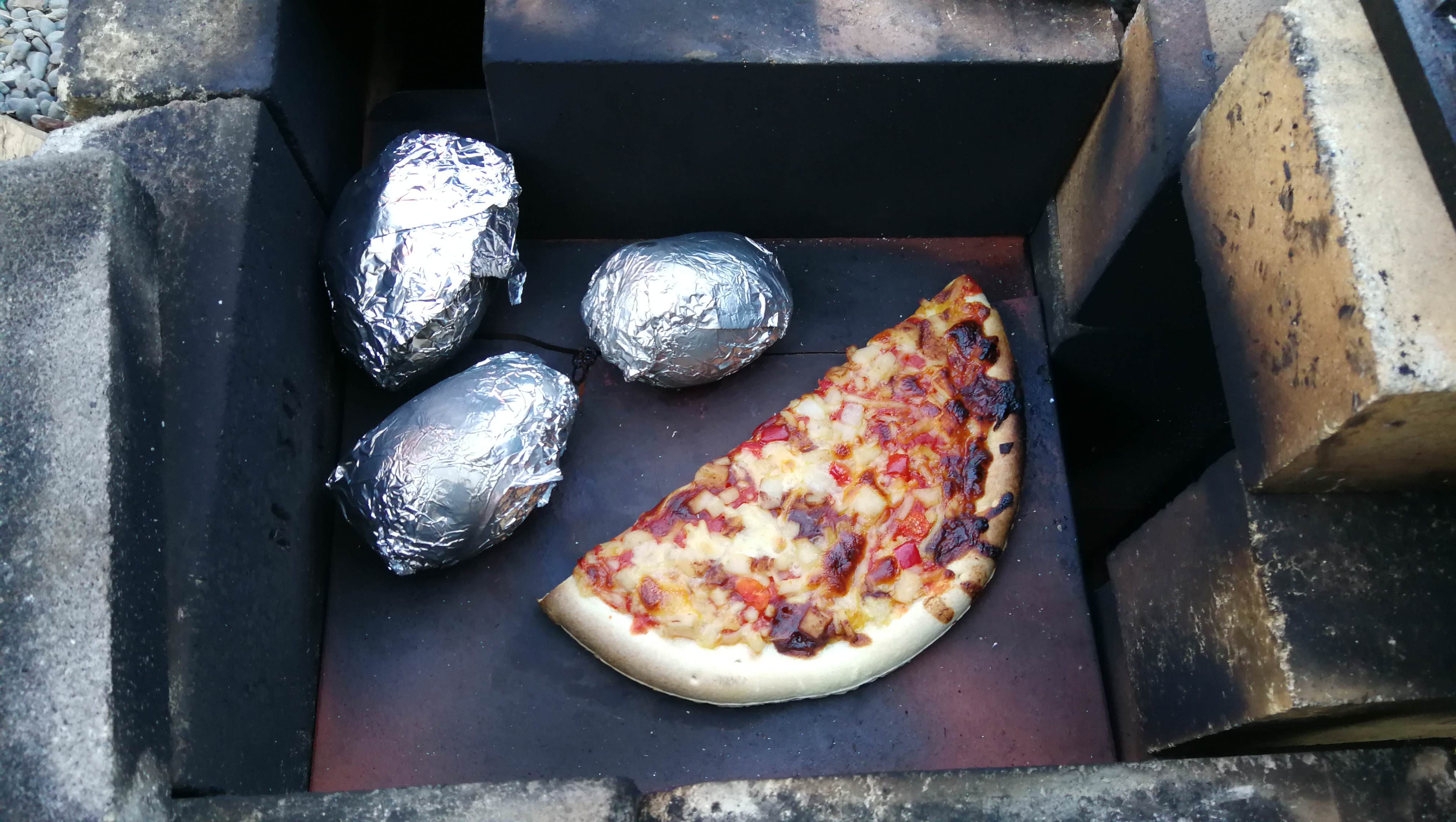 I forgot to turn the pizza half way

The "stone" is supported by an aluminium baking sheet to try and spread the heat faster to the whole stone.

(also baking some potatoes, and kumara )

Graham Chiu
pollinator
Posts: 633
Location: Wellington, New Zealand
15
posted 3 years ago
That first tile cracked again so I ended up with three pieces. I reconfigured the way the gases flowed under the stone, and tried it again today with a new stone. Was roasting and baking pies for 4 hours today and the stone survived!

Ralph Kettell
pollinator
Posts: 263
Location: The Arkansas Ozarks
44
4
I like...

Graham Chiu wrote:That first tile cracked again so I ended up with three pieces. I reconfigured the way the gases flowed under the stone, and tried it again today with a new stone. Was roasting and baking pies for 4 hours today and the stone survived!

I had located a reasonable, not cheap but reasonable source of large sized pizza stones that are rated at 1000°F.  Here is a link to Central Restaurant Supply.  It is the catalog Osage for pizza stones.  Only some of them have three high temp rating.  I am planning on buying one or two from them.

Probably too far away to ship to me but thanks!
Ralph Kettell
pollinator
Posts: 263
Location: The Arkansas Ozarks
44
4
I like...

Probably too far away to ship to me but thanks!

Screen shot of specs below. 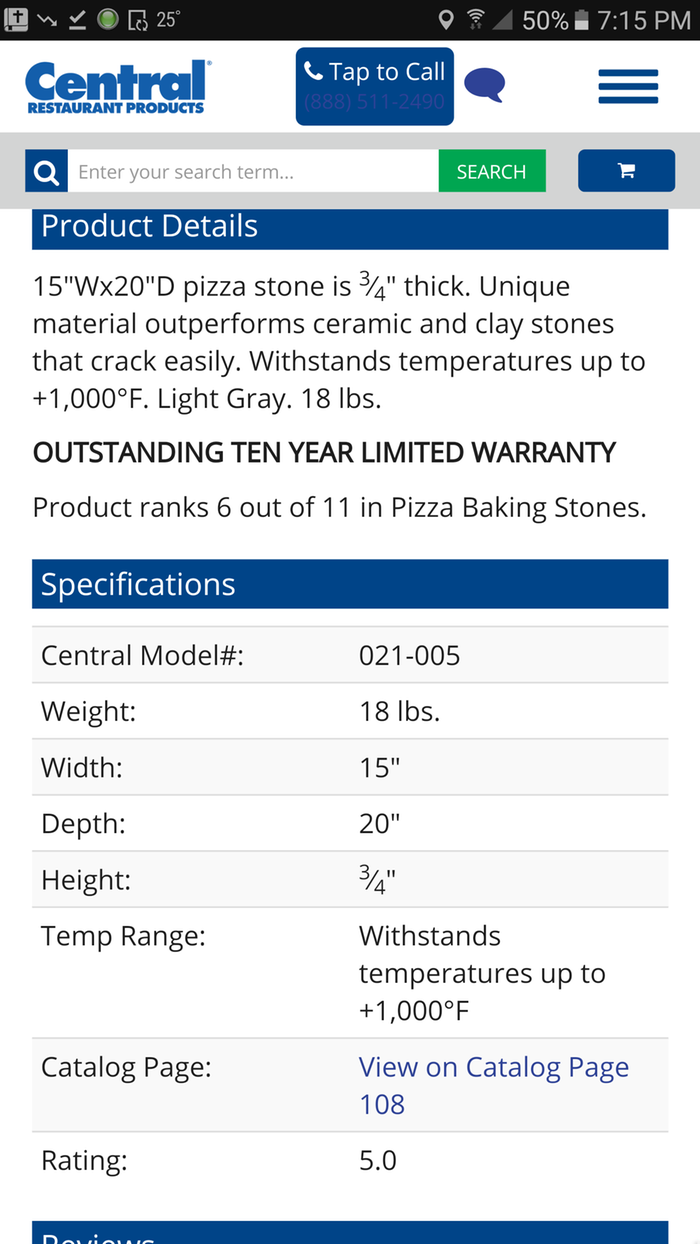 How did the new pizza stone go?  And where is it being used?  Rocket stove?
Ralph Kettell
pollinator
Posts: 263
Location: The Arkansas Ozarks
44
4
I like...

I received the stone and it is a very nice looking product.  I haven't had a chance to used it yet.  My rocket oven has stalled a bit due to changes in scope, uncooperative weather, and competing projects stealing time.

To answer your other question, I am building a rocket oven similar to the kickstarter except I have made some design enhancements.  I am currently building the engine and hope to be testing it the next week or so.    The stand is complete and the oven is basically finished except for the outer insulation.  I want to run some tests without it to guage the effectiveness of some baffling on even heat distribution.

In our earlier conversations about pizza stones and shipping, I was not aware you were from so far away.  Now I.understand your comment in shipping costs.

chris pelfron
Posts: 9
Location: Sonoma County, CA
2
posted 2 years ago
Hi I was wondering if there is any update on this product. I am interested in getting one of these for simple outdoor cooking but reading more about at the manufacturer site it says that you shouldn't ever get it wet or have it come too close to a flame (https://bakingstone.com/faq/) That seems a little too tempermental for the primitive operation I'm envisioning. Basically I'm looking to pile some bricks up next to my firepit and build a crude proof of concept oven for my first attempt.

But if it's the only really good flat baking stone I should just suck it up and put a metal layer underneath it and baby it like they say.
Graham Chiu
pollinator
Posts: 633
Location: Wellington, New Zealand
15
posted 2 years ago
My latest iteration I got 350 deg C or 662 F on my pizza stone which cracked again so it's now three pieces! But it's cooking pizza with a toasted bottom and edges. Some bases are being burnt as well.

The pizza stone is sitting on a cast iron griddle which forms the roof of the burn chamber. And it's buckling under the heat. Anyone know of a solution? Do I need to go to 5 mm steel?