posted 2 years ago
OK,  real woodworkers,  please bear with my crazy idea.
Strait or spiral bits cut strait channels through wood, right?
So my idea is a router with a really long spiral, bit, with maybe 1/2" diameter max.
It would have a bushing on the end,  mounted to a fixed point.
Logs would be pushed past the bit rather than having the bit and router head move.

Would there be any point to doing this?
Would the bits last longer or be any easier to sharpen than those in a circular, band or chainsaw mill?
There are drill saw bits, similar to  but much cheaper, than router bits, that might serve.
I have found one square mill end bit that was 1/2" and 32" long.
1/2 " kerf is huge,  but not much bigger than a chainsaw, and  maybe it needn't be so big.

posted 2 years ago
Would it have enough power to keep cutting?

R Scott
pollinator
Posts: 3797
Location: Kansas Zone 6a
192
posted 2 years ago
Chip evacuation would be SLOW.  Overheat and burn would be an issue, it is easy to burn with a 3 inch bit.

If you look up wranglestar on YouTube, he recently did a trial with a cheap Chinese chainsaw and $20 bar guide from Amazon.  He spent more on the sharpener than the rest of it.  $200 and change all in, the sharpener was half of it.  It worked surprisingly well.  Better with a Stihl, but it worked.

posted 2 years ago
Pushing a log in a straight line would be close to a miraculous feat. Those suckers are heavy. I also suspect a bit that small would bend super easy, especially under the heat of cutting.

posted 2 years ago
I think chip evacuation would be a huge issue.  Plunge routing more than a 1/2 inch with a "normal" bit is about the max you can do.  With a spiral bit it would be better but still a limiter.  I think a chainsaw mill would be better in the "huge kerf" department...

posted 2 years ago
afer using an lt40 woodmiser to cut the wood for my tiny house, I'm with Kyle, pushing the log seems more difficult. The woodmiser moves the bandsaw rather than the log.  Large sawmills usually move the log but their blades are solid circular blades rather than bandsaw blades and are more than 36" in diameter ....and have huge rotational momentum

if you push the log, the log has to be  flat straight or you will have to not only have a y-axis control but a y-axis control that will move up and down as you are actually cutting....otherwise your router cut will be of varying depths instead of a fixed depth (because most logs are not straight, are tapered, and have knots).......right now, I don't know of a router that can change depths while it is cutting (a cnc machine can so you can eventually)

not sure why you want to move the log instead of the router, that takes more energy...but hey you can do it if you've got the time and money to make same depth cuts and you figure out the speed of the cuts

D Nikolls
pollinator
Posts: 1766
Location: Victoria BC
281
posted 2 years ago
I think this one is not a great plan for all the reasons mentioned above..

Even ignoring all of that, look at how tiny the amount of cutting edge on an 0.5"×3" router bit is.. compared to all the cutters on say a 30" chainsaw bar.

Then to make it even worse, compare to a bandsaw; even a very small bandsaw mill is a 12' long blade! And it only needs to remove a tiny sliver compared to a chainsaw.. and even the chainsaw will remove less than the router...

So even if all the unpleasant realities mentioned above could be addressed, you would still be dulling your bits pretty fast, and good luck sharpening them!


Is there any advantage that the router has, vs a circular saw?


That is where I would be looking if I wanted a less traditional small mill... in fact I would love to have a small circular mill on a second carriage paired with a bandsaw; if you could address the need to not cut too deeply it would seem like an excellent way to remove unwanted edges from the boards removed as you work towards a square timber!

Grady Houger
Posts: 96
Location: Eastern Washington
25
posted 2 years ago
William, your idea sounds like the arrangement of a milling machine used for metal. There's definitely a place for a fixed robust motor and cutter that the material is moved against. I'm not able to imagine a way it would be useful for log sized wood through, for all the reasons others have mentioned. For another, a machine that could do that sort of a cut successfully would be so large the power requirements would outclass all the other ways one could cut wood.
William Bronson
gardener

posted 2 years ago
Hey,  thanks to you all for taking the time to respond.
It would seem that my idea is not suitable for cutting wood, and is already implemented in cutting metal.
At least I was able to get this wacky idea out if my head.

As to pushing the material rather than the cutting tool,  I was modeling it off of router tables and table saws.
I was thinking about taking deliveries from chipdrop that included larger logs, so my mill wouldn't need to be very portable.
I had figured the log would be rolled onto a sled or cart, set on a track that was level and plumb with the cutting tool.
The workpeice would be pushed,  cranked or drawn by a pully and weight arrangement.
Actually,  a motorized winch would do nicely, it could even have an off the shelf remote control,
Height adjustment would occur at the cutting tool.
A chainsaw should work in this arrangement,  but Iight be overlooking further downsides.

posted 2 years ago
Moving the log isn't impossible, here's a neat blog by some Irish homesteaders and he uses a trolley and rails to move his logs through a homemade mill.

Julie Reed
pollinator
Posts: 357
84
posted 2 years ago
That Irish rig looks like a way to destroy your back even faster than other mills do it. I suppose he could rig up a cable and pulley system to crank the log through, but I don’t see any advantage vs moving the mill through the log. There’s worse options though. Before mechanized mills, logs were placed over a pit, and a crosscut saw was used vertically to saw lumber by hand- one man atop the log and one man below, with sawdust raining on him constantly. That got old fast and they designed a pivot to replace the pit man, called of course a pitman arm. Long after sawing became a circular affair, the pitman arm concept was (is) still used in steering assemblies on vehicles. The sawing concept is also still used in less developed areas of the world- this pic is from Rwanda in 2009. Talk about a long day of hard work!
70037312-4F82-4A55-A38E-A999D5166E22.jpeg 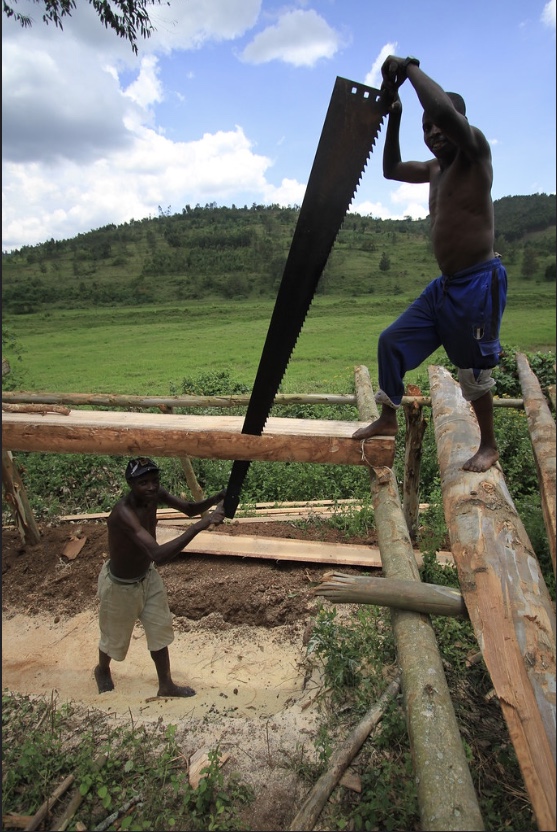