Dan Eisner
Posts: 18
posted 1 year ago
We have a 6’ Segmental double brick wall arch and it has an old wood beam. We are trying to determine if it is self supporting or not. 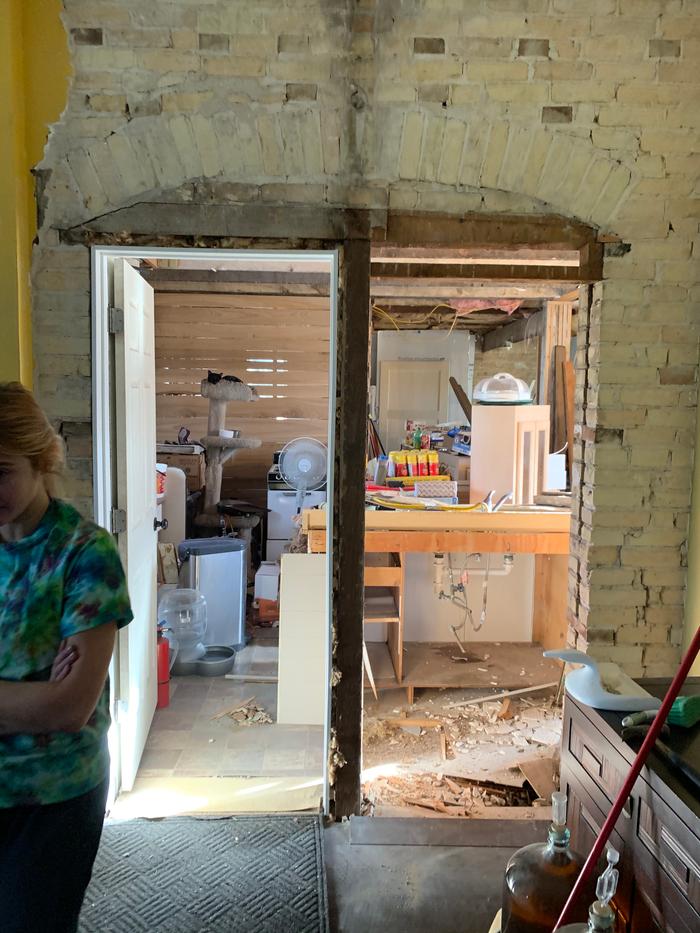 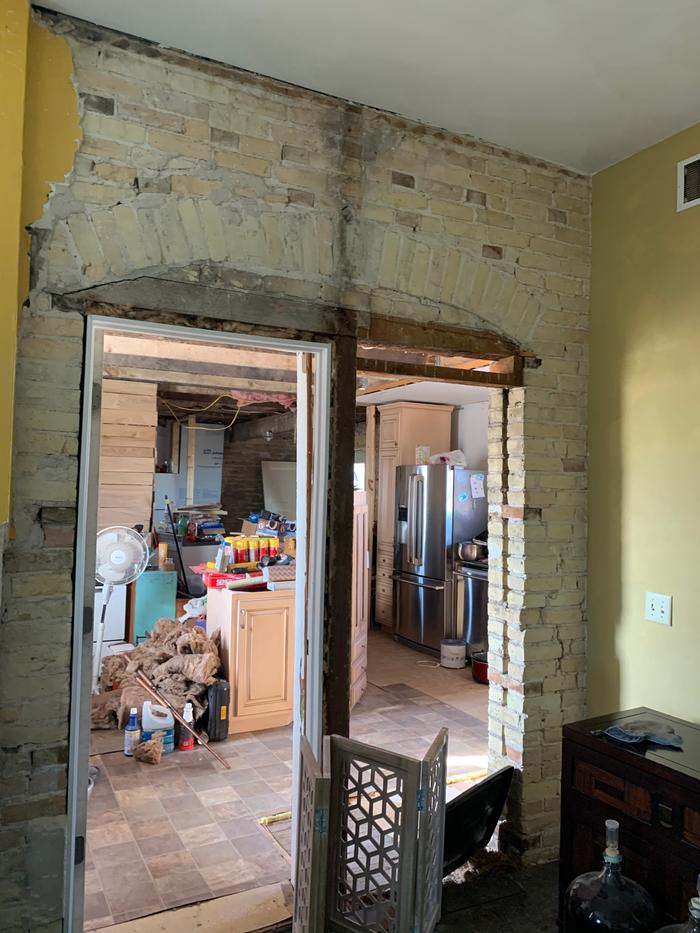 So I am not a brick mason, just putting this out there first. I know a little about this though and will offer some input.

From the pictures provided, it appears that the horizontal wood beam going across the top of the doorway, called a lintel, was installed at a later time after the arch. That brick arch appears to be sound and in good condition. Someone at some point someone decided they wanted to install a door, so then installed that lintel and then filled the gap between the lintel and brick arch with a handful of bricks in a single row. That single course of bricks is dependent on the lintel to stay in place. If that lintel is removed, that single row of bricks I think will be compromised and will fall to the floor, either immediately upon removing the lintel or at some time later. The vertical wooden post in the center of the doorway is there for one, possibly two reasons. It is definitely there for the door frame to install to, and might be its only purpose. It could also be there to prevent the lintel from sagging. I, not being an engineer, do not think that vertical post is "load bearing" and holding up any load above the arch. That arch, appearing to be in sound condition based on the pictures, is carrying the load and transferring it to the rest of the brick wall.

Dan Eisner
Posts: 18
posted 1 year ago
Thank you for your input!

This is the 1st floor of a 2 story brick farm house. The lentil you describe is a log rounded on top and cut on bottom and sides. There appears to be weight on the vertical post but I’m also certain it was all installed for door framing. 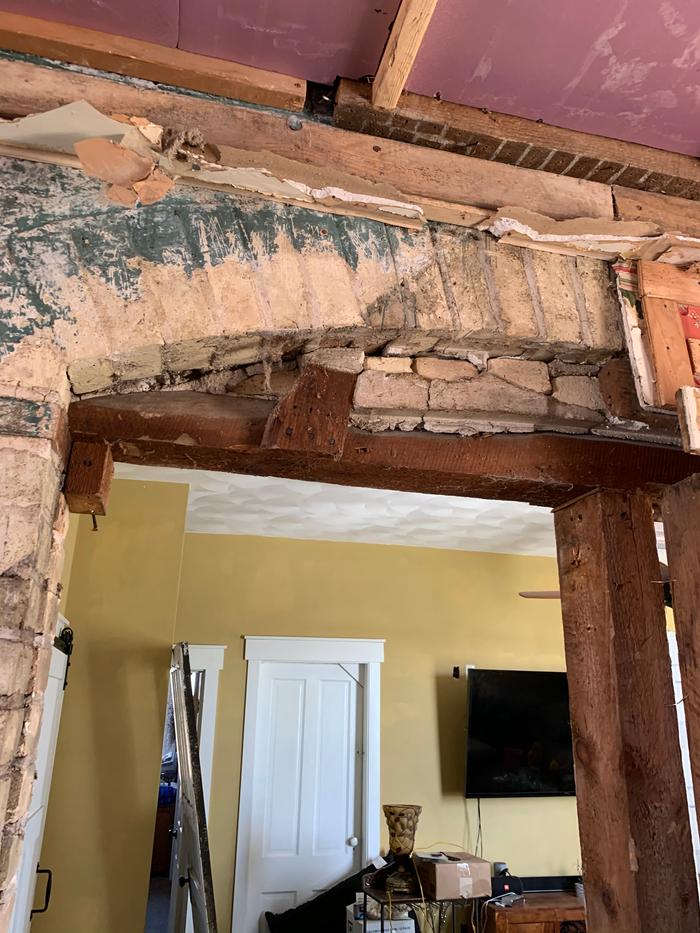 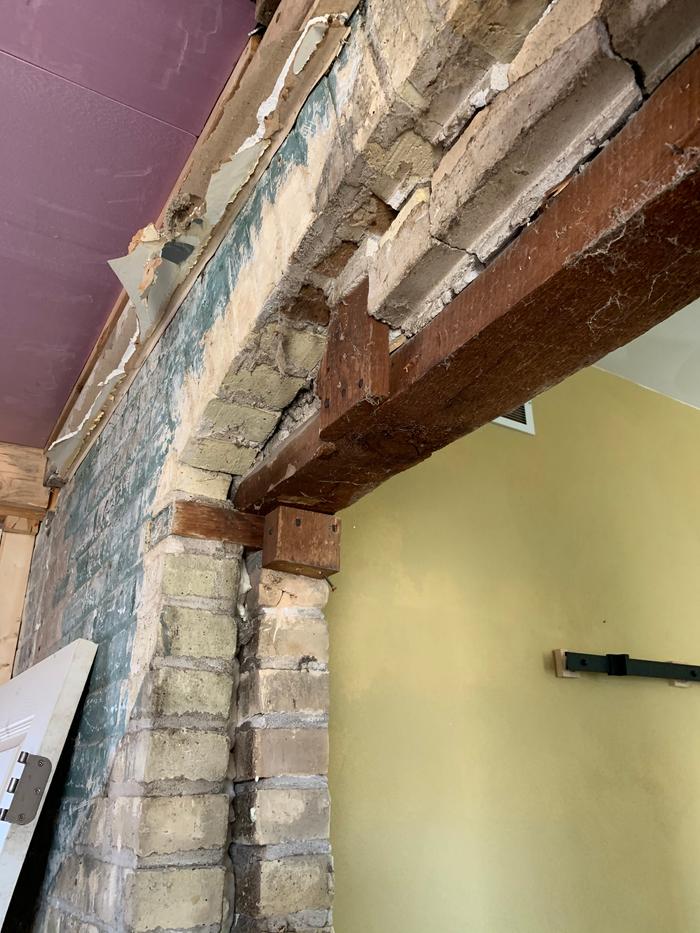 posted 1 year ago
Despite my surname, I'm not an expert.

But two things pop for me:
1) that "arch" is awfully flat to be structural.  Self-supporting?  probably, but imagine a weight applied in the middle of the arch... the brick will just want to squirt out and the whole thing goes boom.  So I'd argue that its not supporting second-story weight.

2) Hey, you've got some big pieces of wood ABOVE the arch. Can't tell from the pics, but those could be load-carrying beams.  I'd investigate those since they are exposed.

Either way, its looking like the arch is probably self-supporting.  Knocking out the wood will probably (!!) result in just a worst case scenario of the arch collapsing, but not the house.  But obviously, be careful and don't take the word of armchair builders!

Much appreciated! The wood is just nailed on for ceiling nailers. It is flat but if you think of weight distribution pushing down and out it could be self supporting? I’m not sure
Glenn Herbert
gardener

Posts: 3453
Location: Upstate NY, zone 5
208
2
posted 1 year ago
A segmental arch like that is a common structural feature in older brick buildings. I am certain it was originally built to support the whole weight of the wall and structure above it; of course, it would be foolish to guarantee that it is still fully capable without examining that whole area of the building.

Is there any settling or other cracking elsewhere in the building? Any later holes cut in the original walls?
Dan Eisner
Posts: 18
posted 1 year ago
Nothing that would directly effect the integrity of the brick underneath the arch
Rufus Laggren
pollinator
Posts: 1233
Location: Chicago/San Francisco
186
posted 1 year ago
What is above the first floor wall shown in the pics, above the arch and along the length of that wall? Does the brick wall in the pics continue up to house a second story? Does the wall in the pics continue up (how high?) as one piece of masonry or is there something at ceiling height (eg wooden plate? beam?) which effectively turns any second story wall into a separate structure that happens to rest on the wall in the pics - but is not integral to it?

What is the dark mark extending straight up from the post in the middle of the arch?

What is _below_ that wall, along it's full length? _And_ directly under the existing doorway? Is there solid support the full length of the wall or is there a crawl or cellar with openings below that wall?

It is good to investigate and determine what your structure really is, as you're doing now. Then there is the question of what you want to do with that space and what more you may want to build out above it. IOW, how much more weight might you want to add above that arch. Those Q's relate when it comes to what you want to do with that arch: Open it out wider, brick it closed, rebuild the arch with more, well arch, leave it open or install different door(s)...

Just as a WildAssGuess, assuming pretty support and original integrity, the arch will probably hold, but _might_ (maybe - not necessarily because when ever one does surgery there is risk) benefit from a little taller curve. However, I hazily recall that it can be pretty important to use the right kind of mortar when repairing old bricks, structural or not. And _that_ I cannot say anything about. Gotta find a mason who understands, and is willing to adjust to, old structures.

My thoughts are based not on masonry knowledge, but on general structural principles and many years researching different building types. My area of expertise, such as it is, derives from maintaining, remodeling, rebuilding two 100 year old wood frame houses and years as a plumber in San Francisco scratching heads with worried GC's trying to decide whether that beam in the million $  mansion in Pacific Heights can support one more deep cut - after 3 or 4 previous owners each chopped it up to move the toilet to their own chosen location!

It looks like a very rough Segmental Arch - though doesn't comply in its curvature, so may be dodgy in load carrying capacity. If in doubt, ask a structural engineer, it WILL save you time, money and possibly lives; certainly peace of mind.

The Q's I listed are basic to any type decision about that wall. I  don't t think you can move forward properly w/out answering them all, although most would likely be fairly obvious. As you probably know, any appreciable weight the arch carries will be transferred to lateral forces - ie. the arch will try to spread left and right and it's integrity depends on the existing wall being able to accommodate (resist) those lateral forces completely and with a margin of safety. Because of it's "low rise", that lateral force will be much larger than for an arch with higher rise. That is assuming the vertical loads down each side of the opening are fully and safely accommodated.

It's been there for a while (!) so depending on your list of changes to that structure (a list which you're _certain_ you won't add to in the future), then if those changes don't change _any_ of the structural elements of that wall, the opening should remain as good as it ever was. You'll notice there are a few variables in the above sentence, but not beyond your ability to verify in situ, I think. If the wall extends up two stories as one single structure, incompressible, then the part above the opening, if it's tight and in good shape, will carry a lot of it's own weight and bridge the opening simply because it will refuse to deform in the way necessary for it to fall into the opening. If the wall is "broken" at the ceiling, or if the structure above the opening is not rigid incompressible brick, then the arch may end up carrying most of what's above it - because in that case what's above it will tend to "scrunch", deform, down into the opening with it's own weight if nothing holds it up.

From your point of view, identifying the "structural elements" of the 1st floor wall, the concepts and practices, may be the biggest question.  . Whether you feel comfortable and/or have time to go that course yourself, depends... <g>  If you identify the structural elements and verify them, your decision is pretty much made, viz the arch. Whether any wall above will bridge the opening safely  just by itself, based on the (2nd floor) wall's own integral rigidity, is a judgement call which isn't as easily cut and paste. That, if it becomes an important question, looks to be something that that almost certainly needs an experienced eye and mind, on site in person.

Dan Eisner
Posts: 18
posted 1 year ago
It’s definitely a question of structural vs the unknown.

The dual brick wall, soft inside hard outside definitely go all the way up to 2nd floor.
Large floor joists held in place by interior brick.

The hard side brick has fallen away from the arch between the lentil and arch. It seems to be weight on the center post, but it has been shimmed.

I’m not sure how I could re-support the arch with a new full beam? Trying to figure it out
Rufus Laggren
pollinator
Posts: 1233
Location: Chicago/San Francisco
186
posted 1 year ago
There's still a whole world unknown (at least on the thread, so far) above the ceiling and in the 2nd floor wall. Joists, nailers, beams, brickwork above...

The usual way to install the "skyhook" involves building a second wall  (sorta) about 18-24" away from the original wall to support the whole works during surgery. But that method may well not work with the double brick wall.

Depending on what you plan on changing, it really seems like you may want to go to the trouble to talk with a mason (or three) on site. After, that is, you have demo'd enough to fully reveal both sides up to the 2nd floor. And probably revealing the brick walls of the 2nd story would be a good idea, as well. Around here exterior brick walls really need repointling every 20-30 years or so; interior walls, I can't say, but might be worth checking at this time when you have the construction site in motion sorta speak. But the mason could let you know if they think that needed. If you're doing much work, it also might be possible to rebuild that arch more elegantly (higher curve), open up the ceilings and walls to show the work and generally make it all totally wonderful looking.  <G>