Drake Swartzentruber
Posts: 8
posted 1 year ago
Thanks to indigenous building practices, it seems that strong frames can be achieved just with some simple notch making and pegs (see below). This seems ideal when working with green timber such as Oak (which they frequently used for posts etc), and when little manpower, skill, and time is at hand.

However, blind mortise and tenon joints for braces seem to be the rule for timber framers. I plan on using green hardwoods, but am absolutely terrified that the shrinkage of both the green post, the green brace and the green wall plate could cause serious problems. I saw an interesting solution to braces at the Mountain Farm Museum in the Smoky Mountain National Park. Take a look at the shed below. It looks as though no mortise and tenon joints were used, just a shallow notch, followed up by pegging. Perhaps this kind of brace could even be installed without even lifting the wall plate, just hammering it in from the side. Or at the very least, it looks very doable with two people. Hopefully it would be up to code if beefy nuts and bolts were utilized?

I have also occasionally seen pegged planks used as wind braces on timber framed dwellings, as well as plank brackets/gallows. Both seem like decent solutions that avoid shrinkage issues when green hardwoods are at hand.

If you have worked with shrinking green woods for framing, I am begging to hear advice on how to handle mortise and tenon work. What dependable resources/studies have you looked to when making the choice to use green shrinking woods for such work? Also, I'm curious to hear all your thoughts and opinions on the structural integrity of the alternative solutions I mentioned. Granted, even if we decide they are dependable and easy for an unskilled builder to execute, the blessed building inspectors may get their underwear worked into a knot, so some sciency feeling pdfs and articles would be invaluable. Experiences and thoughts eagerly welcomed!
169672581_155058436520056_2342805311577050766_n.png 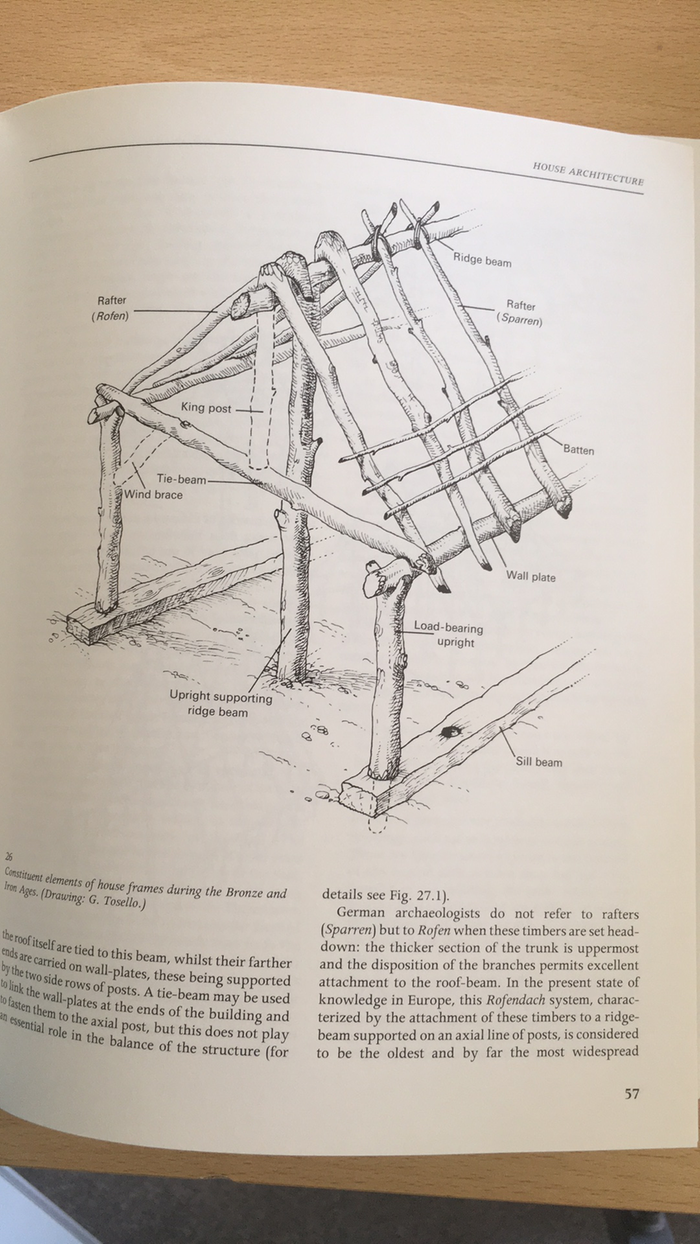 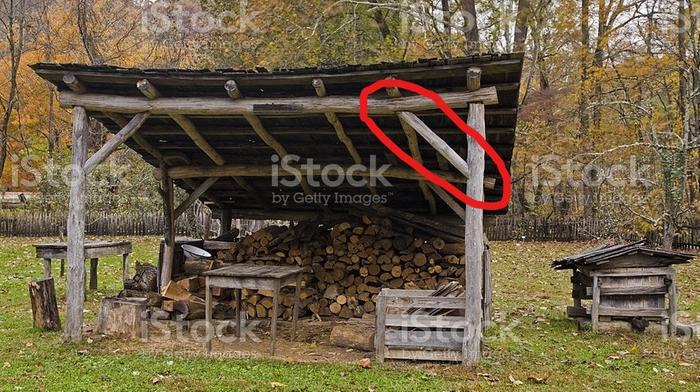 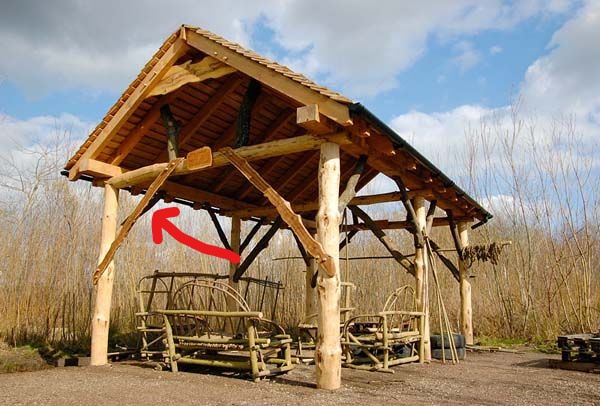 posted 1 year ago
I don't know the answer, but I am very curious about more primitive greenwood structures. So I will be following this thread.

Also, those are some great pictures.

Tradition is not the worship of ashes, but the preservation of fire.

posted 1 year ago
Total noob question, but if the post, beam and brace are all green, won't they shrink proportionally and stay the correct sizes relative to one another?

Drake Swartzentruber
Posts: 8
posted 1 year ago
Welcome aboard Jeremy! Sound “Primitive” methodologies are a thrill. Mike, unfortunately, the shrinkage of the width/girth of green timber is much greater than the shrinkage along the length. The timber can also twist and writhe with age, and unfortunately I’m too ignorant to understand the best solution to all the variables at hand.
Glenn Herbert
Rocket Scientist

Posts: 3911
Location: Upstate NY, zone 5
368
5
posted 1 year ago
Since the common practice for centuries has been to use green wood (especially oak) for timber framing, I would suggest that following traditional practice will work fine, and you do not need to worry about the structure. Allowances for rigid items like windows and doors may need to be carefully considered.

If mortises and tenons shrink across the grain, the net effect is likely to be tightening up the fit on pegs and pulling tenons deeper as the mortise shrinks. I think pegs would want to be seasoned oak, well dried so as moisture equalizes they will fit tighter.

Drake Swartzentruber
Posts: 8
posted 1 year ago
You're awesome Glenn. Good call with green Oak being a traditional choice. What timber framing book would you recommend where the author explicitly addresses working with green oak/hard woods? One of my concerns is that since the brace shrinks along its width the tenon may not sit properly on the the mortise bottom, in which case all stress would go into the pegs. Perhaps driving a wedge overtime under the brace would help? I recall reading that pegs should be bored lower on green timber, but even then there's grain shrinking beneath it, possibly causing it to eventually "hover", right?

I'm also curious to hear your thoughts on the simple brace solutions above. Mortise and tenon cutting for braces seems very time intensive, and I'd imagine the "shed type" braces would expedite the timber framing process dramatically. Its easier to tell from the picture I took on my phone, but the braces were definitely pegged where the tenons would normally be.
Glenn Herbert
Rocket Scientist

Posts: 3911
Location: Upstate NY, zone 5
368
5
posted 1 year ago
In regard to tenons shrinking and shifting the load to the peg, I think that the common practice of offsetting the peg hole a bit in the tenon to draw the joint tighter could be used. Offsetting the hole in the grain direction of the tenon, or a bit downward in the post, would preload the base of the tenon and allow shrinkage to mostly come off the top of the tenon-mortise meeting. Again, if traditional practice does not consider this, I don't think it's a real problem.

Simple notch/peg joints will work fine in compression, but will have little to no strength in tension. If that yields a strong enough structure for the situation, fine. I would consider it an inferior solution for a structure intended to last generations, where you don't know what changes might happen to the structure and its surroundings.

Posts: 3911
Location: Upstate NY, zone 5
368
5
posted 1 year ago
A dovetailed lap joint for a brace would probably be simpler and easier to make than a mortise and tenon joint, and would be very strong in all ways except the brace being hit sideways and knocking the tenon out of its seat. It is a joint that has been used for a long time.
Drake Swartzentruber
Posts: 8
posted 1 year ago
Thanks Glenn for the advice. Are you saying that the grain shrinks less nearer the pegs?

Based on what the Federal Highway Department is saying, shear failure is the biggest potential issue for the shed type brace.
https://www.fhwa.dot.gov/publications/research/infrastructure/structures/04098/14.cfm

The key to that tradition pulling that off successfully seems to have been based on multiple decisions.
-Utilizing the technique indoors (Although the author of the article says this is of no significance, it may be because the sunlight could scorch the timber and cause it to warp. This would be especially important in Indiana, where I live)
-Using two braces and utilizing curved timber, so that that the bracing can be pegged multiple times.
-I'm noticing that the carpenters chose thinner pieces for the braces. Perhaps because thinner pieces shrink less/are quicker to season. Perhaps also because the strength of the brace relies on the pegs, not especially the brace timber. If anything a bulky brace would further stress the pegs.
-Use of half lapping the joints (but not always)
-*edit* it seems significant that the pegs are not cut flush

It's been a real rabbit hole. Pretty fascinating, would definitely speed up the building process and can stand the test of time. But perhaps not as satisfying to behold. Also, the fact that it's only used traditionally in Norway and Russia is kinda sus.... Makes me wonder if their lack of sun helps. However, bolts and nuts could solve that, as much as I hate the idea. Anyways figured I'd post my findings in case it's of interest to anyone. 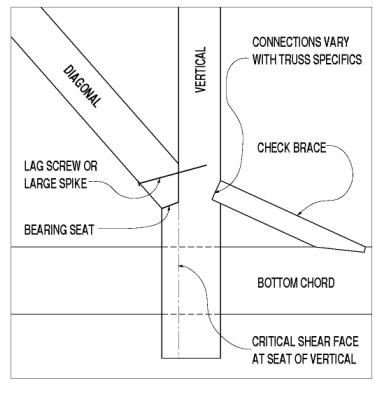 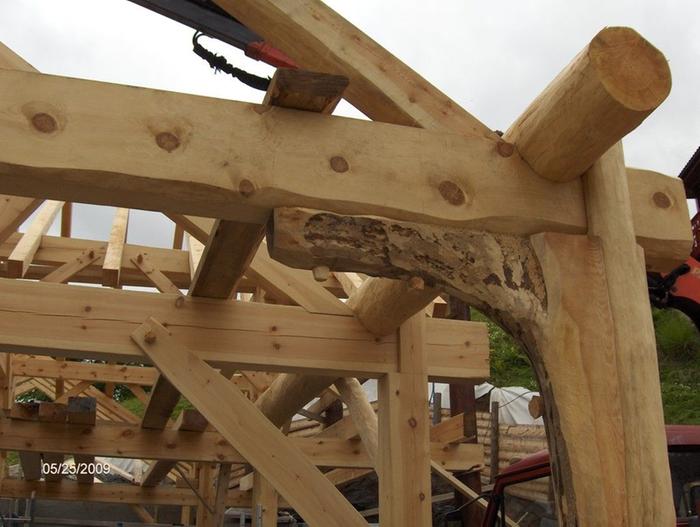 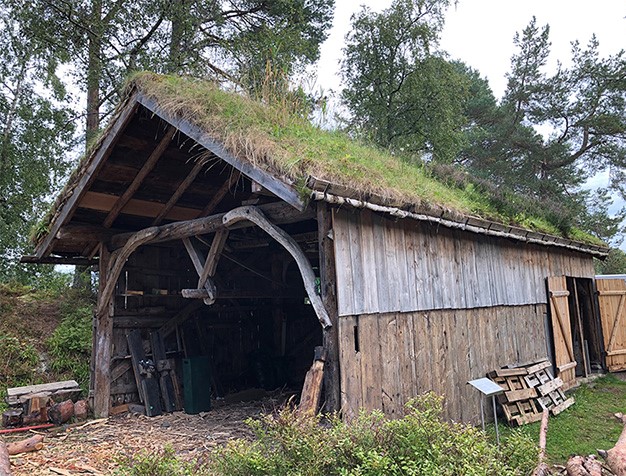 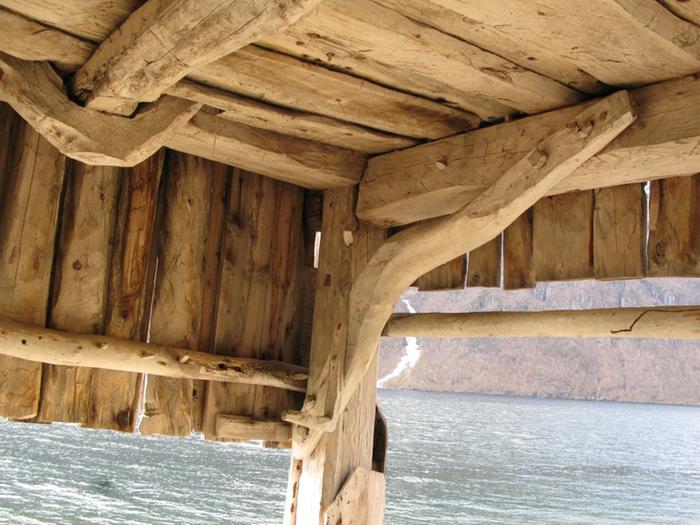 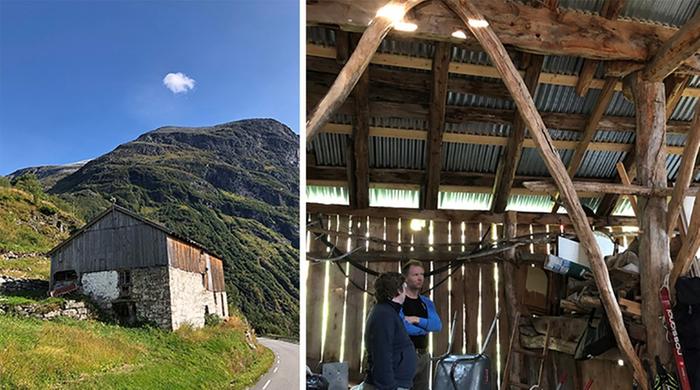 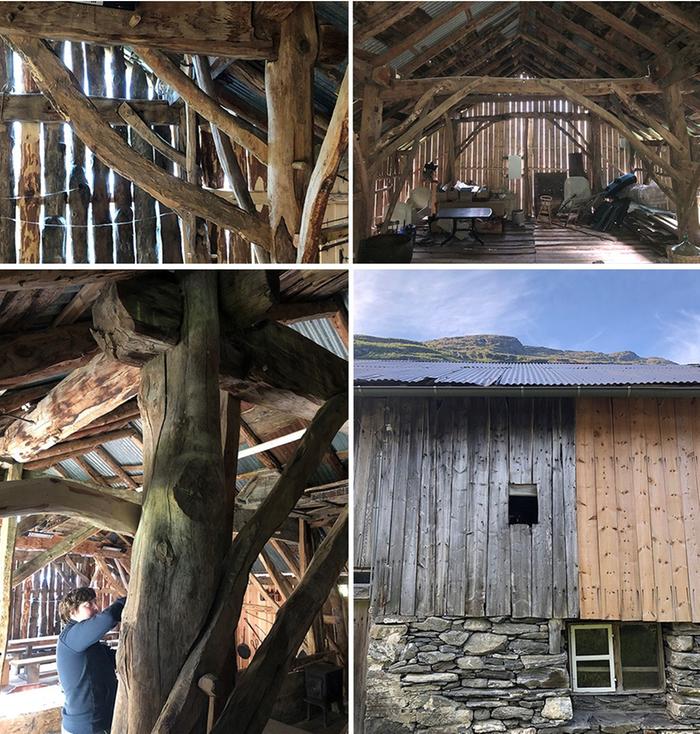 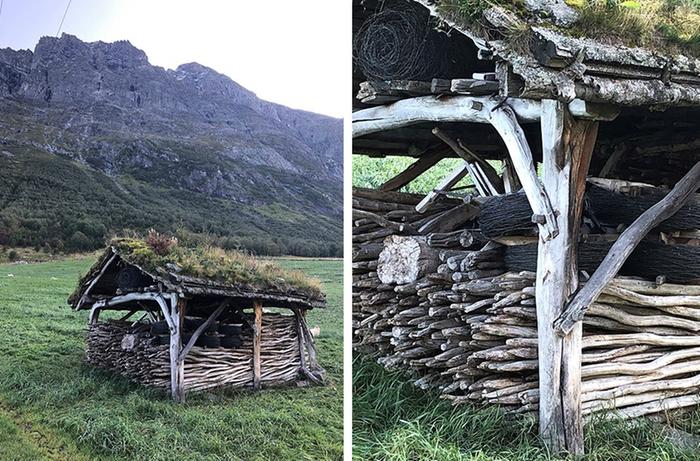 posted 1 year ago
The shrinkage shouldn't be a problem, since generally, you are beginning with approximately similar moisture within all the frame members, and shrinkage is least along the length of the wood. Draw-boring for pegs ought to help with the little bit of shrinkage of the half of the joint that is the width of the wood.
Usually a tenon doesn't bottom out in the mortise, the strength of the joint is at the shoulders, so that has to meet first. Framing M&T joints are often "housed" (the mortised member cut out to receive the full end of the tenoned member) such that the full width of the timber is bearing, not just the tenon. The housing also gives straight/true bearing surface for the shoulder, in either round wood or rough lumber.
With braces, they can also be housed (one of your photos shows this) again so that the whole brace member is bearing on the post/beam. And the braces are working in opposing pairs, since they are strongest in compression (pushing the joints tighter), rather than in tension (pulling the joints apart, and relying on the pegs). The dovetail brace is doing both, since it can't pull out in the direction of the load.

Drake Swartzentruber
Posts: 8
posted 1 year ago
Kenneth, you finally got me to understand. I had no clue that the shoulders bore the weight. I feel so dumb now. Makes so much sense. Glenn I understand better what you meant about offsetting along the grain of the brace. Thanks folks. Still curious about the wackier brace decisions they're making up in Norway...
Glenn Herbert
Rocket Scientist

Posts: 3911
Location: Upstate NY, zone 5
368
5
posted 1 year ago
That's a great set of pictures! I had not seen anything of Norwegian timber framing aside from stave churches.

You will notice that the pegged lap joints have huge pegs; that is because the pegs take all the load in shear. There is no benefit to the braces being larger than needed to take peg holes without splitting, as the pegs are the weak point of the system in both compression and tension. (Some of the braces may be half-lapped so they have a shoulder bearing on the post/beam in compression, it is not clear in most pics.)

Using curved braces both to improve headroom and to allow more pegs is good if you can get the right wood. English medieval cruck frames and some trusses would use as many as a half dozen pegs in main joints where one member tenons into another at a very slight angle with a mortise several feet long. Some of those frames have lasted six to eight hundred years.

The pegs not being cut flush may have a similar rationale as through stones in drystone walling projecting a few inches at the wall face: if the joint moves a little, the peg/tie will still be fully engaged in friction keeping the joint from pulling farther, whereas a flush peg/tie would start to lose strength as soon as the joint starts to move. In full mortise members where there is no possibility of the peg being pulled on, it would simply be a tradition based on early practice of not caring that the peg projects or liking the look.

The diagram shows a major structural truss, where the joint will always be in compression carrying a heavy load, and shear in the relatively short length of the vertical member below the joint is a real concern. None of that applies to residential-scale wind braces.

One thing you can do to keep lapped joints, or notched seat non-mortised joints, from pulling apart, if you can use multiple pegs, is to bore the peg holes at different angles so that they cannot both pull out in the same direction. Each peg anchors the other. You need to be aware of the stresses involved so you don't put one of the pegs at a bad angle. Angles perpendicular to the brace line would most likely be best. so whether the brace is in tension or compression, neither of the pegs is being pulled outwards.

One thing you can do to keep lapped joints, or notched seat non-mortised joints, from pulling apart, if you can use multiple pegs, is to bore the peg holes at different angles so that they cannot both pull out in the same direction.