Blight or otherwise has killed potato vines-- to harvest or not?

John Weiland
pollinator
Posts: 1822
Location: RRV of da Nort
357
posted 1 month ago
Disease or the heat or a combination of the two has resulted in rows of some potato vines being nearly dead, certainly defoliated.  Normally this would happen in mid-August or nearer to September and I would leave everything in the ground til September/October harvest, but we are just beginning August this weekend.  Many of the tubers look large enough to harvest, but I'm unsure about cellaring them already with so many months to go until winter.  If it's a disease like late blight, then I recall that the tubers probably should be harvested and used and not included in next year's seed stock.  There are Russet Burbank, Red Norland, Yukon Gold, and a white potato whose name escapes me just now.  The Russets and Reds are taking it the worst.  Advice would be welcomed regarding what others have encountered or done in a similar situation. Thanks!

Kathy Vargo
Posts: 14
Location: Meriden, NH
3
posted 1 month ago
Harvest ASAP to save any useful tubers.  Don't store them use them up.  Some may be liquified in the center.  Dispose of the vines and yucky tubers appropriately!
Douglas Alpenstock
pollinator
Posts: 1669
Location: Canadian Prairies - Zone 3b
434
posted 1 month ago
Well, "mostly dead" is not the same as "all dead." From what I've seen, mostly dead vines still feed the tubers and help them set for storage.

Norland reds are early potatoes. Dig them out, eat and share. Steamed, with dill and cream, OMG!

Yukons and Russets are keepers. I agree, store too early and they won't be nice at all. I guess there's a sweet spot for getting them out before mold/fungus starts to take hold, and digging into a few plants will tell you what's happening.

All of these are widely used commercial varieties, so finding clean seed is [dirt] simple. If it's disease, that's what I would do.

Looking for citations on "mostly dead" vs. "all dead" this is what came up. I hope it helps.

posted 1 month ago
I had a patch of potatoes get late blight pretty badly last year. A lot of them were kind of black or mushy. I chucked those out. But, even in the spring, I was still finding edible ones...nor nearly as many as I would if the patch hadn't gotten blight, but there were still some. I ate the good-looking ones, always cutting into them first and inspecting them for discoloration. But, the good ones were fine.

posted 1 month ago
The advice in the UK is to take the affected foliage and burn or otherwise dispose of it.  Then leave the tubers in the ground for any spores to disperse before harvesting the tubers see RHS. org. That way they are less likely to rot (but still might so use them first), but given blight survives in tubers it is best not to save this crop for seed but buy uninfected seed tubers for next year.
(edited to add)
And try and get all the tubers out of the ground.  Overwintering volunteers can reinfect next year's crop.

posted 1 month ago
This post offers some very good advice about late blight:

It is in the thread about tomatoes though I feel blight is the same no matter what vegetable it is on.

Use lots of precautions not to spread it.

posted 1 month ago
Something was killing some of my potato plants too. Only I don't think it was blight, but colorado beetles (and their larvae). I surely saw some of those creatures sitting on the 'almost killed' plants. Luckily there were potato plants at the other side of the garden that looked healthy.
I took out the plants with colorado beetles, stamped on the plants to kill the beetles and took the potatoes to eat them a.s.a.p.

John Weiland
pollinator
Posts: 1822
Location: RRV of da Nort
357
posted 1 month ago
Thanks for all of the excellent comments and suggestions here.

First and foremost as many are experiencing as well, it's been an unusually hot and dry summer in the western US and Canada going all the way east to the Mississippi River region.  Add to that the smoke from wildfires and doing a lot of garden watering from both well- and river-drawn water and these add up to variables that differ from growing conditions in recent years.

Yes....some of the potatoes I've dug so far from under the dying vines are watery and mushy.  These have been discarded far away from the garden.  This afternoon I will do a separate assessment with a dig through a longer part of a row on both the reds and the russets to try to gauge a plan of action.  As others have noted, dying is not dead and certainly there are examples of the green stems (leaves no longer present) still contributing to tuber growth and  nutrition.  But it's the cases where late blight can migrate into the tuber and ruin storage integrity that has me worried.  It's worth noting that we had the usual battle with Colorado Potato Beetle (CPB) and the most infested with the  beetle became the vines that appeared to blight earliest ---  but also to say that we were more rigorous than ever at manually removing beetles, larvae, and eggs this year, so the actual damage from the beetle was rather minimal. Both the 'Dakota Pearl' and 'White (Dakota) Diamond' varieties (white table stock potato) stood up well to both CPB damage and blight symptoms and were acquired new this year to test this possibility.

Maybe this will be a good year to test a "half-and-half" approach:  Harvest half now and put into 'monitored' storage.  That is to say, keep a close eye on the storage progress as the weeks go by and if it looks like they are declining, just eat them sooner rather than later.  The other half will be left in the ground and also monitored every 2-3 weeks as we approach October.  If they seem to be holding up underground, then leave them be until the normal harvest date.

I only dug a few potatoes from the blighted rows before I concluded that the watery, rotting tubes that I pulled earlier......... were the seed stock that I planted! (Doh!!......)  So for some reason, with the conditions indicated in the previous post, the seed had not yet decomposed as I was accustomed to seeing by this time.  Perhaps in a more 'normal' year the higher level of moisture causes faster rate of decay.  The tubers below that seem fine at this point, yet I do feel the need to monitor the rows carefully for quality reductions in the remaining potatoes since they still have some time to go before typical harvest time.

Top photo shows a blighted row of russets near the left, followed by paste tomatoes (still green), Swiss chard, and then kale (more blue-green).  Second photo is a close-up of the blighted vines and the third photo shows the size of the healthy tubers, the vines that were pulled above them, and the still-attached seed tuber that was soft and decaying (and somewhat embedded among the roots).
TomatoesChardKale.JPG 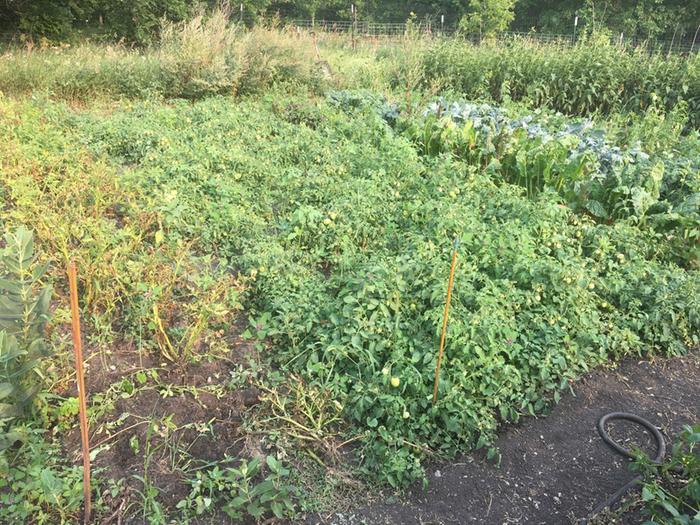 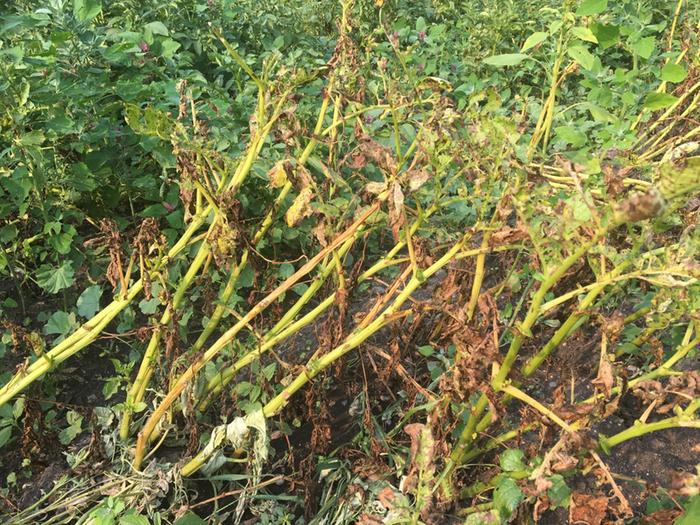 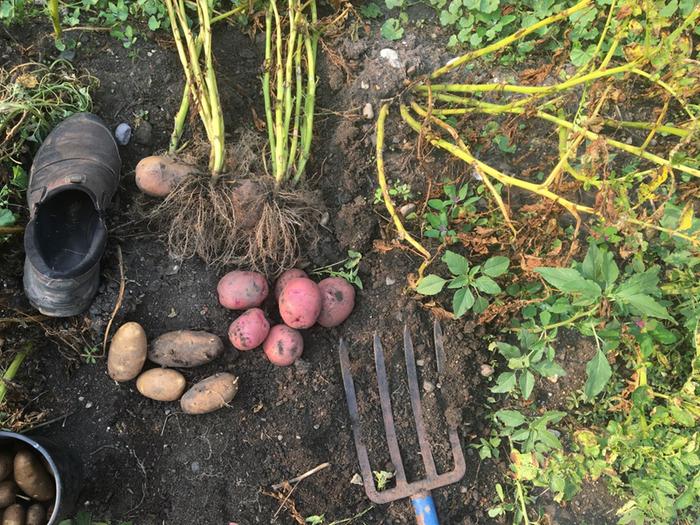