posted 2 months ago
Here's an update on my younger peach seedlings. These photos were from last October, near the end of the growing season. The trees are about 7 months old.

Like the seedling in the first picture, the majority of these seedlings seem to be very well adapted and very healthy, vigorous growers. These peach seedlings had already made it through the first test, as they were planted very densely with other peach seedlings, and these were the ones that survived and grew fast enough to out compete their neighbors.

The second picture is of one of the seedlings that is struggling. This is the only one that I noticed that seems to be having more major issues, other weaker seedlings were probably already selected against. Most of the others look very similar to the first picture. It is possible that this weak seedling could be a result of transplant shock, or due to non fertile soil that it was transplanted into. However, I think it's also very possible that it just happened to be a dud genetically for this area. It may have been a vigorous enough grower to keep up with the other seedlings initially, but the disease and pest issues may be catching up to it.

The parents of these seedlings are growing pretty well in my area, so I was glad to see that the majority of the seedlings seem to be inheriting the genes to grow well here also, and hopefully a couple will even greatly surpass their parents. It also seems reasonable that an unlucky few will get the unfortunate bad set of genetics and struggle here as a result.

I may give the struggling seedling another year, just to ensure it wasn't something I did, like transplant shock or unfertile soil. Even if it is a dud, I will turn it into rootstock and graft better adapted varieties onto it that will thrive here.

May Lotito
pollinator
Posts: 289
Location: Missouri. USA. Zone 6b
194
posted 2 months ago
I also observed a huge difference in tree seedlings growing in various spots. Four pear seedlings ranges from 1 ft to 4.5 ft in height. Of the two mulberry cuttings taken from the same tree, one is 3 times bigger than the other. In general, more fertile the soil the plant grows better.
Compared to my one vigorous peach tree in the middle of veggie garden, I also found two mysterious volunteers by the pond dug out of old burn pile. For a long time I thought they were smartweeds since they were so tiny, only 1 ft tall and 1/4" thick. But the leaves did look like peach and they are obviously herbacoeus. I guess high pH and low OM in the soil do them no good. Any way, I piled up some cedar wood chip and compost to amend the soil. See if I am able to identify them when they grow up a bit this year.

posted 1 month ago
This little frog was hanging out on this small peach seedling near the end of last year.
Little-frog-on-a-little-peach-seedling.jpg

May Lotito
pollinator
Posts: 289
Location: Missouri. USA. Zone 6b
194
posted 1 month ago
How's everybody's peach trees doing? My tree is full of leaf buds now. The triple buds I saw earlier are all leaf buds too. Oh well, one more year to find out what kind of peach tree I have.
P1120487-(2).JPG

posted 1 month ago
I bet yours will flower next year May!

I spotted the first flower buds starting to swell about two weeks ago! This will be its first year flowering and its third growing season. I'm hoping it'll hold a few peaches, but I'm expecting that most or all of them may drop off this first year. The tree seems to be very healthy and a pretty good size, so maybe it'll hold on to a few!

posted 1 month ago
There are a lot more open flowers today!

posted 1 month ago
Compared to the peach seedling above, this named variety peach is about to bloom for the first time too, however all of the blooms look like they are in almost the exact same stage.

I'm guessing that this is selected for by commercial growers mainly so that the crop all ripens near the same time, however for the home grower, and even commercially for a smaller and sustainable scale, I think that having the peaches ripen over a longer time frame provides both more resiliency and value than having a huge amount of the fruit ripen at almost the exact same time.
20210321_171523.jpg
20210321_171553.jpg

posted 1 month ago
I just stuck a couple of pits in the fridge the other week. We get enough cold for them to stratify outside and I want to make sure they get going this year. Hopefully one of them turns into something worth eating.

posted 1 month ago
Me too!  I am CRAZY about nectarines.

In the fall, I saved a couple of pits from some we bought at the grocery store, cracked them open, and put the seeds into a baggie with damp coco coir, then stuck it in the butter compartment of my fridge and forgot about it.  Lo and behold, both of them sprouted and developed nice root systems.  I left them in the fridge through the winter until I was ready to finally plant them today (March 27th).  It's one of our last chilly days here in the high desert and within a week or so I expect that the sun will be roasting on some days.   I covered the sprouted seeds entirely but shallowly because I honestly wasn't sure which way the trunk was going to come from... I'm assuming the split seed becomes the first leaves?  I figured whatever needed to would push through the last bit of soil.  Anyway, planted them where I want them to grow and mulched them, and I'm hoping to have two little nectarine seedlings soon.

I'm not certain how they'll do here in our crazy climate.  We're Mediterranean but on the cold side @ 6000 ft.  Our summer suns are incredibly harsh at this elevation, so I planted the seeds on the northeast-ish side of our house where they will get some shade, especially from the killer western sun.  I think the shaded location (more so with one than the other) might also help to keep the tree dormant a bit longer in the spring (we have confusing spring weather and many problems with late frosts after early warm weather).  I've heard that planting in a shaded location can help with chill hours as well, though I don't think that will be an issue here.

I have high hopes that they'll taste better than their parent nectarines because they will be grown with love in a healthy permaculture garden as opposed to monoculture, etc.  If not, I suppose I can graft some better-tasting options onto them!
Alcina Pinata
Posts: 25
Location: London, UK, 51.5°N
15
I like...

posted 1 month ago
Update on my nectarine pits.  So the Sunburst (the ones with the full length cold stratification): the two pits still in their shells hadn't germinated, but I planted them anyway. The two pits that I deshelled: one seems to have disappeared, the other looked like it was starting to germinate

So it got planted too.  The Honeyblaze (the ones with 42 days cold stratification): the two pits still in their shells hadn't germinated and there was some funky mould on the paper towel and their shells. But hey I planted them anyway.  The two pits that I deshelled had both rotted, I didn't bother planting those! So now we wait...

Dorothy Pohorelow
Posts: 66
Location: Southeast corner of Wyoming
15
I like...

posted 1 month ago
Hope my apricot seeds can slip in here...  I have three Manchurian Apricot pits I will be trying to grow trees from.  DH was nice and very carefully used his vise to crack the shells so I could get the pits to plant

I put them in a labeled and dated zip lock bag with some moist coco based potting soil used for microgreens.   Now comes the wait...  the instructions say they need to stay 60 to 70 days in the fridge. Of course by that time I could possibly plant them outside if I wanted to risk losing them to the squirrels..  Most likely if they sprout I will keep them under lights until large enough for me to feel they are safe from our local wildlife. 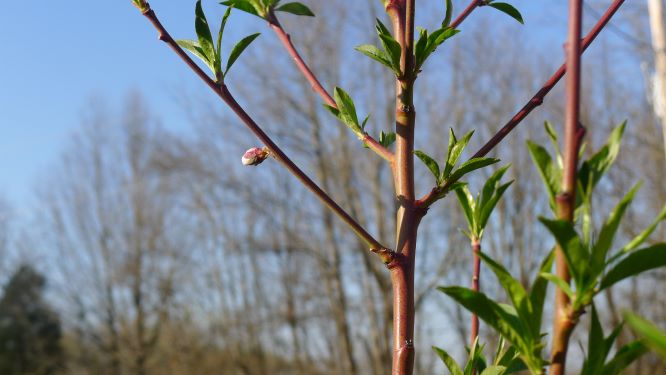 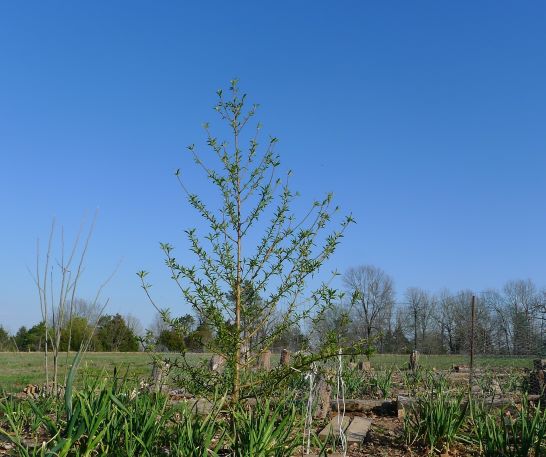 posted 3 weeks ago
Update on the nectarine pits:

Look what popped up a couple of days ago 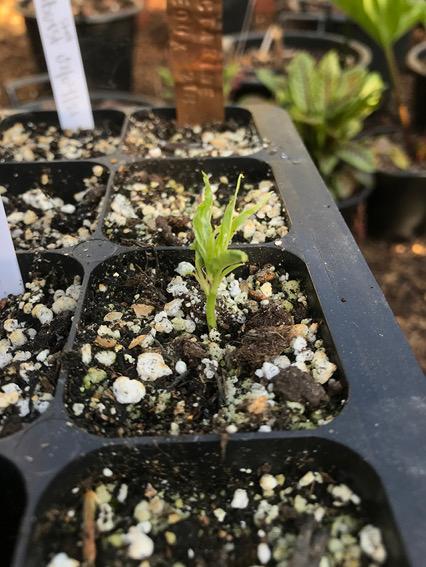 This one is a Redix 125 - one of the late varieties I sowed outside (without removing the shell) and left outside all winter. Nothing yet from any of the others...

May Lotito
pollinator
Posts: 289
Location: Missouri. USA. Zone 6b
194
posted 2 weeks ago
Update on my single peach flower: I hand pollinated the flower with a q-tip but didn't expect the self pollination to work. Now 3 weeks later, there seems to be little peachs growing! Triples too. I guess I need to thin the smaller ones but now the fruits and stem still look pretty fragile to touch.
P1130541-(2).JPG 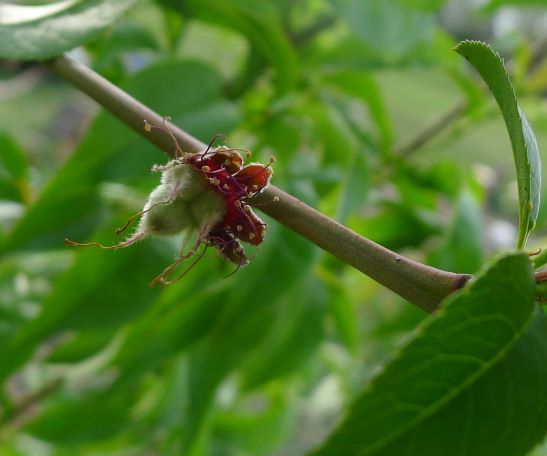 May Lotito wrote:Update on my single peach flower: I hand pollinated the flower with a q-tip but didn't expect the self pollination to work. Now 3 weeks later, there seems to be little peachs growing! Triples too. I guess I need to thin the smaller ones but now the fruits and stem still look pretty fragile to touch.


Oh wow that's so exiting!  A single flower and you've managed to get triplets!  I've been doing a spot of horticultural husbandry with my fruit trees this year as I only have a few small trees so it's not that arduous. I now have baby apricots for the first time in about 5 years so I understand your joy!  :)

posted 2 weeks ago
Triplets! So cool!

We had a bad late freeze and most of the peaches fell off my seedling peach. I think I have about 3 or 4 left. Hope they make it!

posted 1 week ago
I think I counted 6 peaches left on the seedling peach tree the other day after the really bad late frost we had. Here's a picture of two sister peaches on the tree from a few weeks ago, and they are still doing well!
20210411_173426.jpg

Dorothy Pohorelow
Posts: 66
Location: Southeast corner of Wyoming
15
I like...

posted 4 days ago
I only left my apricot seeds in the fridge for a month before taking them out and letting the bag of damp soil and seeds sit to warm up to room temp slowly.  I have them planted in clear 12 ounce cups with seed starter mix.  I was thrilled to notice today that 2 of my 3 seeds have sprouted :)  The one that caught my eye is breaking the surface of the dirt so I checked the others.  The second one is further behind but has a root and is starting to grow the stem...  The third one is still just sitting there but is not rotting.