posted 3 years ago
I walked my other half down to the station. The track is a bit wet, and he took a big step to get over a puddle. I spotted something curled up right where his foot was going to land, so I pushed him over. Not right over you understand, but enough to knock him off balance a bit and put his foot down far enough over to avoid standing on this fella. He wasn't very amused, but then he saw this guy and gave it a kick to see what it was.

Don't know why I bother some days... 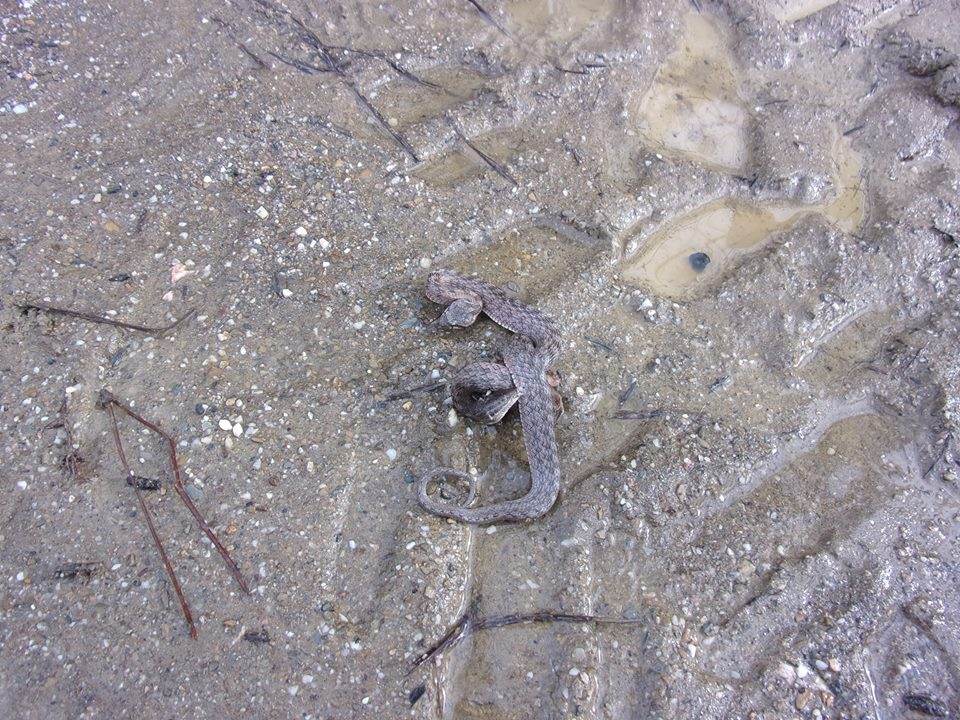 It decided it didn't like being kicked, and began to uncurl itself and slither away... 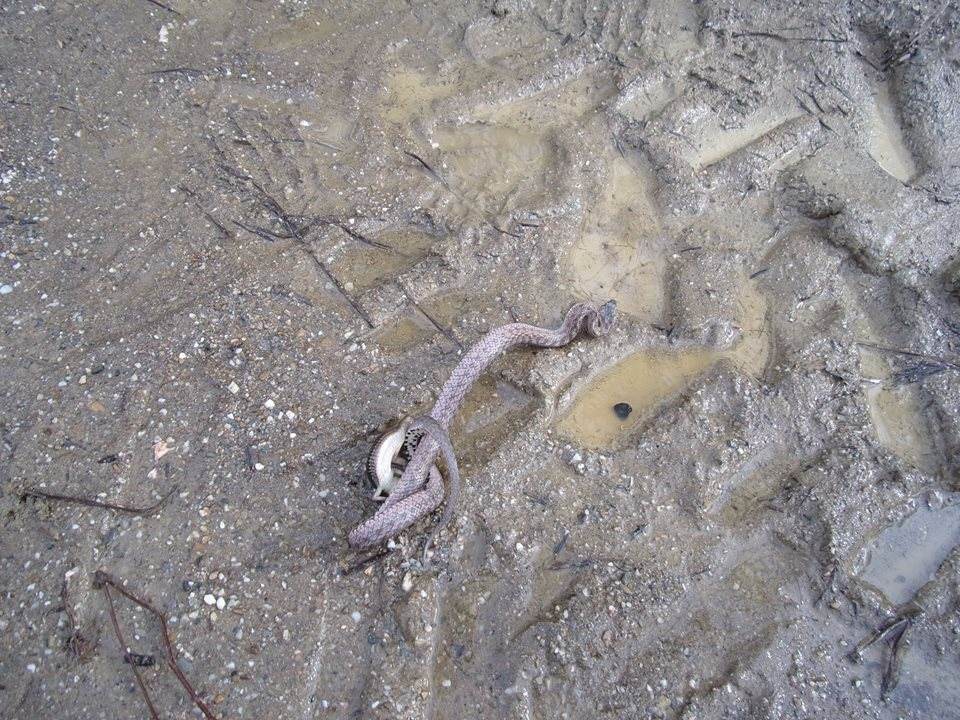 ...leaving a tail-less lizard behind it. Poor thing. 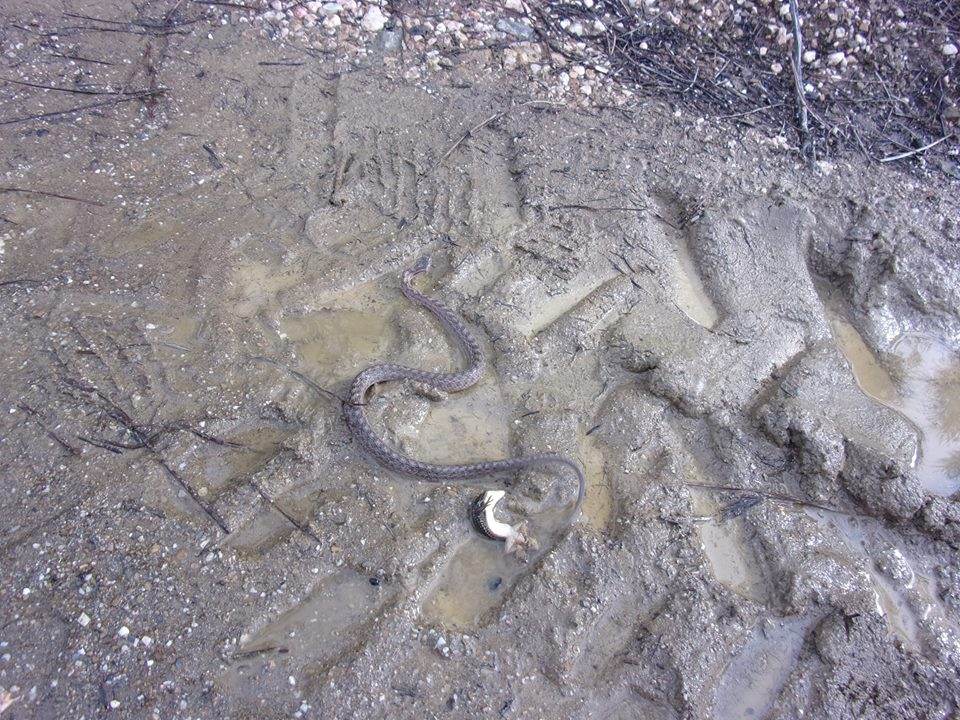 Off he goes. Hope he'll be OK.

Go for it, little fella! 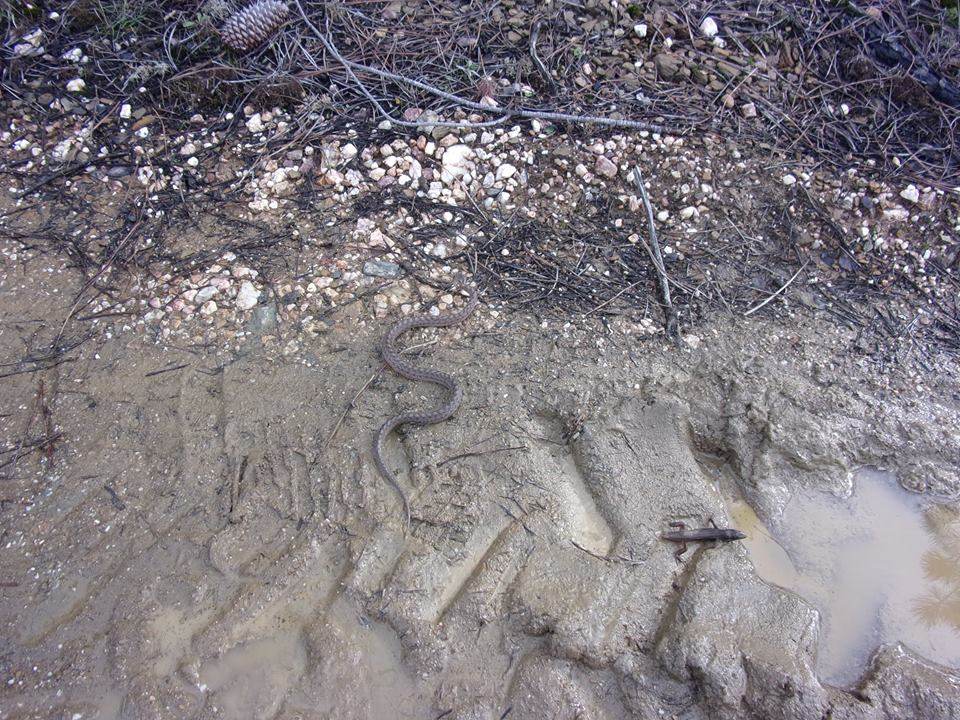 posted 3 years ago
Wow, do you have many poisonous snakes in your area? I don't freak out about snakes, but I'd never randomly kick one here.
Burra Maluca
Mother Tree

posted 3 years ago
I was told that there are no poisonous ones here, but I was also told that if was bitten, then I should kill the snake and take it and myself to hospital immediately 'just in case'.

So I'm not sure exactly how non-poisonous they are.  In any case, I don't want to stand on them, or let anyone else step on them.  The little lizard was a bit dazed but waddle off quite promptly, so I guess if the snake was poisonous, then maybe it wasn't a very strong or fast acting poison.

posted 3 years ago
I don't think there is such a thing as a slow acting snake venom, so I'd say you're safe. If I see a snake approach a human I assume it's a black moccasin, as that's the only aggressive species I've heard of. Otherwise, even the venomous snakes really would rather avoid us. I've picked up random snakes on the end of gardening tools and carried them to more appropriate locations. I still wouldn't chance kicking one. Even without poison that's a puncture wound, both painful and prone to infection.
r ranson
master steward & author

We don't (officially) don't have poisonous snakes where I am, but a bite can still kill a human.  Our biggest problem - INFECTION.  Apparently, a snake bite is more likely to give a deadly infection than a dog bite (which is supposedly very dangerous).  I'm content to believe the official view on this and haven't found any reason to test this theory for myself.

Another note, even though we don't officially have poisonous snakes, those in the know (parks department, animal control, &c) will tell you that there are sometimes poisonous snakes: either escapees from people's collections or ones that hitched a lift from out of town.

posted 3 years ago
Took a look on the InfernalNet and found there are some poisonous snakes in Portugal, and I think your SO kicked a Portugal Viper, but I can't tell for sure.

Here's the Wikipedia for reptiles of Portugal: https://en.wikipedia.org/wiki/List_of_reptiles_of_Portugal

And here's the link to the Portugal Viper. Looks similar to your photos. https://en.wikipedia.org/wiki/Vipera_seoanei

Overall, it appears that most of the species aren't poisonous, but you do have some.

posted 3 years ago
Thanks for sharing the pictures. I really like the slithery creatures.

We have rattlesnakes here. It's a small micro-climate that sets us up as badlands in Canada.
Also mean spiders and the odd scorpion because who doesn't want to have all the fun stuff....
Anyhow because of this micro-climate and the fact that rattlesnakes really shouldn't live in Canada, the rattlesnakes are protected here.
Big fines if you kill one.
Some of my friends in Texas find it funny.
I sent my daughter down a trail one day to get a picture of her under a tree. She almost walked on a rather large snake.
Rattle, hiss, slither, scream... I didn't get any mom of the year awards that day. 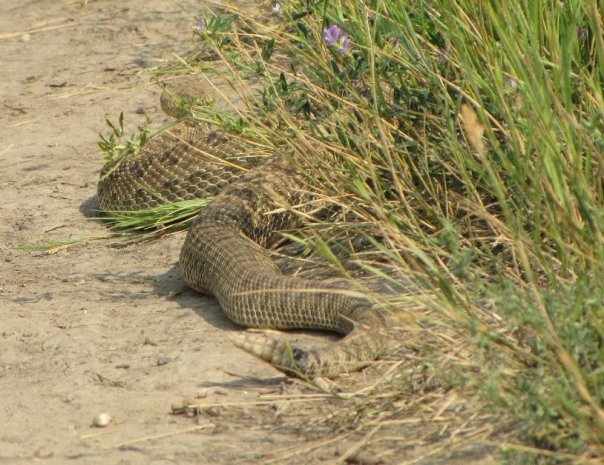 Find your way around here

posted 3 years ago
Burra,
I liked your play-by-play of the event. Your other half should be thankful that you were paying attention. He looks poisonous, considering the shape of his head. IDK.

Here, we have rattlesnakes and copperheads. But, thankfully, a few King snakes.

Here's a pic from back in the summer of a king snake eating a copperhead that took place by my front porch.

Kind of looks like it may have been Portugal's most venomous viper.  According to brief searching, this is the only one of several venomous snakes in Portugal that is actually dangerous to humans.

David Livingston
pollinator
Posts: 4328
Location: Anjou ,France
243
posted 3 years ago
How big is this snake burra looks like could be a grass snake to me .
As someone who has been hospitalised by an adder l know what they look like