David Livingston
pollinator
Posts: 4328
Location: Anjou ,France
245
posted 3 years ago
My self and tooty really like beetroot so two years ago  I saved some seed . Man you will not believe how big the beetroot plants got six foot plus ! Any way I planted the seed and got a very mixed bunch some stripy some tough tasting others very good some far too sweet I came to the conclusion that somewhere nearby was grouping beets for their cows :-( . I would like to try again but ...... How to choose what I want when I can only find out which plants have the traits I want by eating them ?

John Weiland
pollinator
Posts: 1838
Location: RRV of da Nort
365
posted 3 years ago
Are beets able to overwinter where you are located?  One possibility might be to harvest your beets a bit earlier than usual, but still at a mature phase.  When preparing meals, cut the crown off, but leave 1 - 2 cm of root still attached to the crown.  Now decide which beets that you ate are the ones you like best and use the recommendations in the following link to re-sprout roots from that crown.  If you get enough root growth to re-plant the beet before winter, it will be induced by the winter period to flower in the following year.....and you will have a flowering beet from something that you already taste-tested for your palate.  As beets are out-crossing, there may still be some variation for a while as you do this over several years, but after a while (assuming you are not getting abundant cross pollination from a neighbor or from wild beet) your stock will settle more into beets that you like for your cooking.   This can be done even by root-cellaring I suspect, but I think it would be easier just to transplant the re-sprouted crown and trim it back in front of a window or in a solarium until spring when it can be planted outside again.  Good luck! 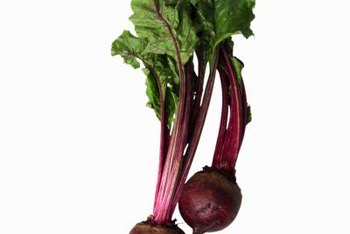 Edit:  Just remember that beet is self-incompatible and out-crossing, so would be best to have several of your favorite beets saved this way so when they bolt and flower, they can inter-pollinate each other.

posted 3 years ago
I believe people taste test biennial root crops by cutting a small chunk off of the shoulder of the root.  I'm assuming they do this while the root is still in the ground.  Mark the ones you like and harvest the rest.  Then I'm assuming the let that spot dry up a bit and then recover for the winter.  In the spring it should sprout and set seed.

For beets, I'd be surprised if a farmer would have fodder beets setting seeds deliberately.  Since they're mainly grown for consumption that fall.  Unless they're saving seeds too.....

Beets do get big when they're flowering so they need more spacing.  I'm in a cold area so I harvested all mine and kept them in the root cellar.  In spring I planted the ones that looked the best on an 18" spacing.  By using that as my criteria, I'm selecting for good storing beets (not flavor).  From 15 beets I got about a quart of seed.  My seed book says you need to plant at least 6 beets to maintain genetic variation.  It also says they are wind pollinated and need to be kept 2-5 miles from other flowering beets or chards.  Chard is in the same family so flowering chard will cross pollinate as well.  My book says you can also put a bag around the 6 beets to protect from other pollen.  But I don't know how you'd actually do that and how tight the mesh needs to be to keep pollen out.

At my place, beets are not reliably winter hardy. So I dig them in the fall and store them till replanting in the spring. That lets me select for shape of the roots. And I can cut off a side of the beet for tasting.

David Livingston
pollinator
Posts: 4328
Location: Anjou ,France
245
posted 3 years ago
Thank you for your help gentlemen these were originally an old French type called crapodine they are triangular and large ( think softball plus ) so I will dig some up have a look and replant :-)

Dale Hodgins
Posts: 9002
Location: Victoria British Columbia-Canada
690
posted 3 years ago
My main experience with beets is with Swiss chard, a sort of beet which is grown for the leaves. For several years, I grew it in the same place and new plants would come up from seeds that were allowed to mature. There didn't seem to be much difference in flavor. I was mostly going for winter hardiness. Only those that could survive the winter deluge and many freeze thaw cycles, would go on to reproduce. Sometimes they were stringy, so I pulled those out by the root and ate them. Others produced very small leaves, so I uprooted them as well. This left me with plants that were fairly consistent in leaf size and winter hardy, in an area where most things are winter hardy.

Since there was never any crop rotation , for the chard border , during the 14-year life of that garden, before the house was sold, I regularly fertilized with seaweed and coffee grounds. Beets grow well, in the small amount of salt provided by seaweed, and there's lots of micronutrients. I wonder if the small amount of salt, helps with winter hardiness. Could it provide some degree of antifreeze.
Greg Martin
steward

posted 3 years ago
Dale was the garden you were overwintering your swiss chard in Victoria?  Was just curious how cold it was where they were surviving.  I had some over winter for me once here in zone 5 Maine, but it was an unusually warm winter....more of a zone 6 year.

I suspect that much of the PNW would be able to support over-wintering beets much like coastal northern Europe unless some pest or disease or other factor was prohibitory.  Additionally, beets are considered halophytes due to their estuarian association throughout their evolutionary history....much of the sugarbeet crop that was grown in California was done so on land that had received so much irrigation, it was one of the crops that could still produce on the high salt, worn out soil.  But I'm not sure that cold-hardiness in beet could be attributed to an anti-freeze effect as I think beets have this characteristic irrespective of the salinity of the soil.

Greg Martin wrote:Dale was the garden you were overwintering your swiss chard in Victoria?  Was just curious how cold it was where they were surviving.  I had some over winter for me once here in zone 5 Maine, but it was an unusually warm winter....more of a zone 6 year.

About 60 miles Northwest of Victoria , near the town of Ladysmith, on Vancouver Island. It's seldom gets more than 5 degrees below freezing. The deepest freeze that I've seen in the soil, is probably 4in. Most years, there was no freezing of soil or only very brief, shallow freezing. I was growing on very dense, poorly drained soil, but I had built it up with several loads of wood chips and topsoil. For the first few years, it was like a giant flower pot, sitting on an impervious base. Eventually, the soil became workable to at least 1 foot deep. Most of this was done by the worms, and not me. When I first started this garden, I couldn't find a worm.
Rebecca Norman
gardener

posted 3 years ago
The difficulty with saving seeds from beets (or chard, which is the same species, Beta vulgaris) in a pace where they overwinter just fine, is that there may be some self-seeding and growing as a weed in the area, which would make it hard to isolate them outdoors.

Here where I live, it's much too cold outside for beets or chard to overwinter, but people do grow chard in the greenhouses as a winter leafy veg. I've brought beet seeds, but beets are not common here. I was considering trying to make some beets go to seed very early, in the greenhouse, so that they wouldn't get crossed by any other chard that might be growing in the area. When I read about saving seed, I read that these are wind pollenated and can cross-pollinate over surprisingly large distances.

I grew two seed crops of beets this summer. A patch of yellow beets, and a patch of red beets. The patches were separated by about 20 feet. The cross pollination rate between them was about 5% (as demonstrated by 5% red seedlings showing up in the yellow beet seed.) That is very consistent with what I see in other crops. The mathematics of pollination make it a highly localized phenomena, with an occasional rare pollination from further away. That rare event might make a difference to a seed company that is using the crop to grow "foundation seed" for the whole world. But it doesn't matter at all to me as a small scale farmer. I don't care if 5% of my yellow beets end up being red beets.

Joseph Lofthouse wrote:
That rare event might make a difference to a seed company that is using the crop to grow "foundation seed" for the whole world. But it doesn't matter at all to me as a small scale farmer. I don't care if 5% of my yellow beets end up being red beets.

Joseph, I think I recall you mentioning having a previous life as a chemist.  This link may interest you as they are still working out the finalities on the synthesis of the betalains:  https://phys.org/news/2017-10-evolutionary-stone-beet-red-beets.html 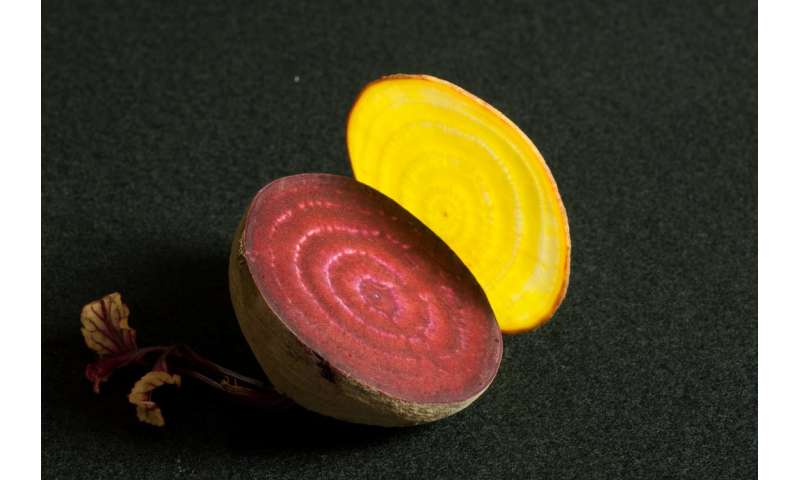 With regard to safe distances for reducing cross-pollination in Beta, an interesting review:  http://www.osgata.org/2016/ge-sugarbeet/

Thanks John. It's nice to know that there are two red plant pigments out there, the anythocyanins, and the betalains. The betalains are found in cacti, carnations, amaranths, ice plants, beets, etc. To honor my commitment to eat lots of diverse foods, I intend to include more of the betalain producing caryophyllales in my diet. https://en.wikipedia.org/wiki/Caryophyllales. I'm already growing red-root amaranth, beets, chard, orach, cactus, sorrel, and rhubarb. I grow spinach,  lambsquarters, and purslane too, but don't remember seeing red or yellow coloration in the leaves. A little bit in the stem sometimes. I've tried growing kinwa. It has colored leaves.