posted 2 years ago
I've always been acutely aware that learning about colour is a conscious act for me.  It wasn't until recently that I discovered that it isn't for most people.  They seem to learn about colour naturally.  I want to improve my ability to understand and use colour in my creative works, so I've started reading the book Color Problems which is a practical guide to understanding and using colour published in 1901.  Some of the science of how the eye works is a bit ... creative by our standards.  But I've learned all sorts of fascinating things from this book already.  When my eyes are tired from reading words, I look at the pictures (the book has over 100 coloured prints)

This one, in particular, grabbed my attention. 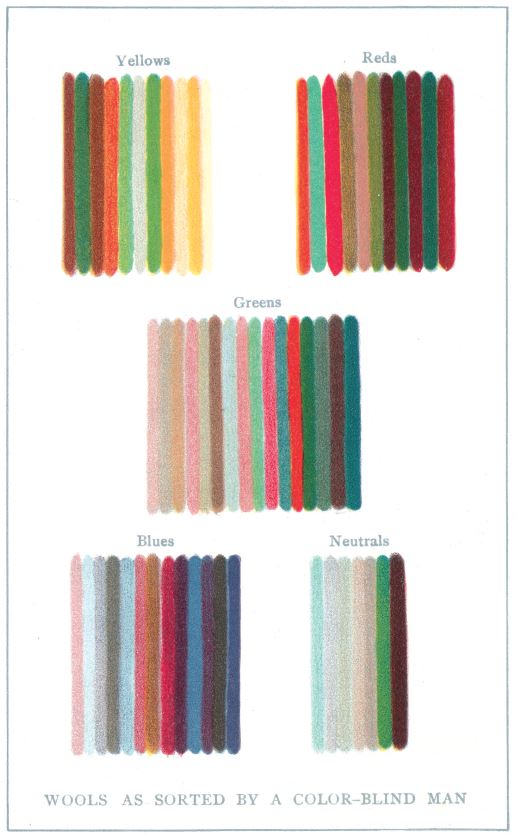 Without reading the words, the grouping of colours seemed quite natural to me.  But then I read the chapter about colour blindness and some of the different ways it manifests.  It's funny, I can see that these aren't grouped by the colour they are supposed to be and yet, the groupings seem to make sense to me.

Now I'm curious about colourbliness.  I know I'm not because I've been tested many times.  But maybe there are many ways to perceive and interpret colour?  I don't know.  It's just an idle thought I had.

I'm going to bounce around google for a while to learn more about how people who are colour blind perceive the world.  I want to learn more about this.  Are there different kinds of colour blindness?  What does it mean?  Do people see the world in greyscale?  Google will tell me, I'm sure.  But I thought it would be fun to start a thread about it and see where it leads.

posted 2 years ago
The colour sense of synesthetes is interesting.  They may experience color as a number or a sound, apparently. https://synesthesia.com/blog/types-of-synesthesia/

posted 2 years ago
I can't help but link to the permies thread about testing for colorblindness https://permies.com/t/35925/Color-Acuity-Test.

Here's the test I used from that thread, and it's how we found out that my husband's dad and sister are blue/green colorblind, and his mom is colorblind across the spectrum (she can't distinguish between similar colors).

I find colorblindness fascinating. My grandfather was red/green colorblind, and my cousin is to a small degree. It seems that I don't carry the trait, as my son isn't colorblind. But, who knows? It's recessive on the X chromasone, so maybe I carry it and passed it on to my daughter.

I recall running across some websites where you could upload a picture and see how it looks for those with different types of colorblindess.

How to design for colorblindess

Here's how some colored pencils look with various colorblindenss

posted 2 years ago
I have a red/green color vision deficiency, not the most severe but pretty significant.  Those wool colors are hopeless to classify. There's maybe one yellow in the yellow group I would have considered a yellow (but wool doesn't take yellows well, not natural dyes anyway, not the sort of bright sunshiney yellows I enjoy).  There's nothing in the red group that I could have confidently put in a group with that label; it's all brown, mud, forest, or greenish/natural colors.  There's maybe three greens in the green group I would call confidently; two "traditional" greens and an aqua that I only know belongs in the green group because it was my mother's favorite color and there was enough discussion of it to know she considered it predominantly green despite it being, technically, a blue-green mix.  Blues I believe I would have sorted four into into that group.

Everything else?  There is an awful lot of "grey", "brown", and "I dunno what the fuck" which means "I can tell that it's got some color to it but I couldn't tell you which one if you put me in front of a firing squad."

But -- since I gather the whole point of the graphic is that the color blind man who sorted got everything wrong -- I should point out that there isn't a single color in any grouping that I can point to and confidently say "nope, that's wrong, it's in contradiction to the label."  There are maybe three where I'm dubious.

I tried to do that Farnswell-Munsell thing when the thread went by awhile back and it was pointless ... if I am recalling it correctly there were endless swathes of almost indistinguishable blocks that I was being asked to arrange in some sort of hue/shade order, only there was nothing particular to choose between them.  They were *different*, but not by enough to sort.  Eventually I got bored with generating what was going to be a random-ish result and did not complete the test.  If I had been forced by some medical or bureaucratic authority, I am sure it would have revealed considerable color vision deficit, but I am not confident it would have revealed much about the nature of my issues; I simply didn't feel as if the test offered color distinctions sharp enough to let me accurately communicate the visual discriminations I am in fact capable of making.

posted 2 years ago
Ah-ha! I found the website that lets you put in a picture and see how it looks to those with various versions of color blindness. I stuck in some screenshots from permies and the tutorials I'd made, and was kind of amazed at how different things look. I hadn't realized just how bright primary blue is to most every form of colorblindess. It really "pops" compared to the other colors (one thing I read said that that was why facebook's icon is that color. Mike Zuckerburg is red/green colorblind, and that color "pops" for him more than any other).

Anyway, without an further ado, here's the website! You can drag and drop your own images into the thing!

posted 2 years ago
For fun, and so I could paste the image into the colorblindness simulator, I used photoshop to make stips of color in the color of the wool, and rearragned them into the catagories. Some were, like Dan said, rather boarderline. Peachish reds and reddish browns that could go into neutral. Greyish blues that could go into neutral or blue. Four colors didn't really seem to fit in the catagories, as were more either more purpleish than red, or more orangish than yellow.
Color-blindness-wool.jpg 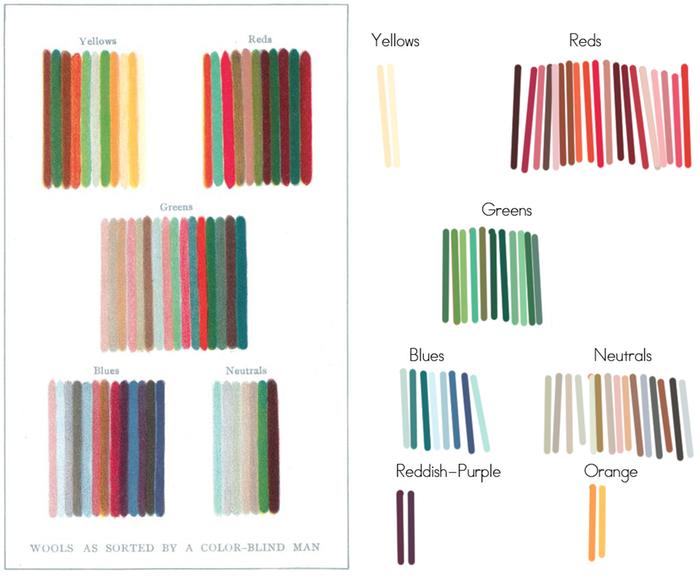 posted 2 years ago
This is really interesting how the colors are seen differently based on the different types of colorblindness. Never seen this before.

posted 2 years ago
I re-read Oliver Sacks' "Island of the Colorblind" some weeks ago.
Not sure if you are familiar with the style of his books. They are not purely dry scientific documents but very well written by a true scholar with immense interest both in science and the human side of his patients.
Anyway, the book is very interesting as he studies a population with hereditary colour blindness, together with a colour blind fellow scientist.
Fascinating to read. Check it out in your library, I can only recommend it!