Gyula Kósa
Posts: 3
posted 2 years ago
I would like to mimic the look of the following fireplace. At the same time I would like to use all of the advantages of a Peter van den Berg type batch box RMH (efficiency, heat storage etc.):

What is your opinion about the following sketch of a batch box RMH with an external side winder combustion unit with glass walls on its three sides, please?

The scales/proportions on the sketch are still just drafts. Especially the height should be much larger in reality.

In order to preserve heat in the combustion unit as much as possible I would use two layers of Robax glass perhaps with some distance in between them.

Most likely the glass walls & door will have to be custom made. I have not found any suitable one on the market yet.
This one is closest: 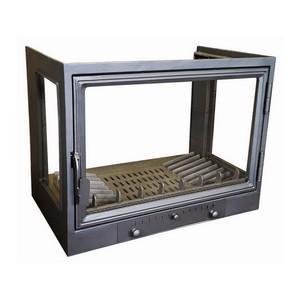 Very nice looking fireplace in your first attachment.  I didn't really understand your drawing.
I have not built a batch box only J tubes, so I am not an expert. Hopefully an experienced  B.B. builder will respond.
Here are my thoughts for what they are worth.
I suspect that ordering custom glass could be expensive.
If you double the glass up I see issues with not having much of a view of the fire.
I don't see where your mass will be?

Keep us posted as you plan and when building. We like pictures!

Posts: 3665
Location: Upstate NY, zone 5
253
4
posted 2 years ago
It looks risky to me. It might work, if you can double-glaze the windows, and put ceramic fiber insulation everywhere that is not glass. I know people have put glass in the side of a batch box, but I have never seen near as much as your sketch shows. I do think that double glazing would be likely to let the inner surface get hot enough to avoid rapid sooting, maybe avoid all sooting. The smaller the glazing can be relative to the firebox volume, the more likely I think you can avoid sooting issues. I would put the door on the right side, to minimize gap sealing issues, rather than the front as the commercial unit picture shows.

Aside from that, the layout looks sound. I would extend the bell space under the firebox, and also into the sloping hood top above the firebox, both for more heat exchange surface and mass, and for less firebox surface exposed to room temperatures.
glassfront-bb.JPG
Mike Haasl
steward

posted 2 years ago
It looks like the design is to have the door on the right side (based on the location of the sidewinder slot and the floor of the batch area.  Where does the chimney exit the bell?  At the bottom right and then up along the right side and across to the center?

With the back side of the bell against a wall, would that require a bigger amount of surface area into the room? And some insulation or an air gap between the bell and the wall?

Posts: 3665
Location: Upstate NY, zone 5
253
4
posted 2 years ago
I would say you are correct, Mike. And definitely a lot of insulation -and- an air gap between bell and exterior wall.
Gyula Kósa
Posts: 3
posted 2 years ago
Hi Glenn,

Many thanks for adding the sketch! It seems to me that in my original post the engine of this forum does not load images from HTTPS links, only from HTTP.

Yep, the door would be on the right side.

I was also thinking on extending the bell space. The question will just be how to support the mass above the firebox. I'm not sure if welded frames for the window and door will hold enough.

You see it right - the chimney goes on the path you described!

The wall behind the heater is a 40 cm thick solid brick interior wall.

That's a good question if insulation or air gap is required and how such side of the bell counts to the internal surface area.
The guys in Portugal built the bell just beside the wall. Moreover that seems to be an exterior wall.
I'm not sure if Peter's red heater made entirely of cast parts has or has not got any air gap: on one picture there seems to be a 10 cm gap, while on the final picture the heater looks like it is placed to the wall.

I shall probably consult with the structural engineer how much heat and temperature is that wall allowed to be exposed to, and from what distance.

The heater is more or less in a pathway in the hall. I would like it to offset out of the wall as little as possible hence the rather small depth and wider bell. From the point of the RMS it might be a little bit disappointing because such geometry has smaller volume than a usual quadrat-based bell with the very same ISA. Smaller volume -> faster gas flow -> less time for the gas to transfer heat to the mass.
A ball-shaped bell would be more ideal in this respect I believe.

Gyula Kósa wrote:
I'm not sure if Peter's red heater made entirely of cast parts has or has not got any air gap: on one picture there seems to be a 10 cm gap, while on the final picture the heater looks like it is placed to the wall.


The red bell is placed 8 cm from the wall. This is plasterboard on wood frame, the surface temperature of that wall did get alarmingly high despite the gap. There's now a radiation screen of vertically mounted, galvanized corrugated iron on horizontal alu strips mounted against the wall for the second winter. This works really wonders: while the heater's rear wall is too hot to touch for more than two seconds the screen remains about hand warm.

posted 2 years ago
Regarding the viability of a sidewinder core with glass walls: it might work, provided all the other recommended specifications are followed closely. As there is: air from the right hand side, secondary air by a floor channel, proportions of the firebox, port, riser and so on. Stay away from an overly large firebox, this will end in just another open fireplace insert complete with poor combustion quality. The one mistake which could be made is the depth of the port which isn't that well defined. As a rule of thumb, have the depth the same as the specified width within a 30% plus/minus tolerance.

As I see how my combustion core is running with a cast firebox of just 3 cm wall thickness without insulation around, the walls of that box are mostly spotless clean. I also know that the glass ceramic is a poor conductor, let alone when it's doubled up with an air gap in between. The bell space is another matter, don't overdo it, slightly underspec'd is better than overspec'd.
So let's see what you can make of it, I am seriously interested!

Posts: 3665
Location: Upstate NY, zone 5
253
4
posted 2 years ago
A 6" batch box wants about 57 square feet of internal surface area (excluding floor). If the internal space is 4' wide by 1' deep by 5' high, that would be 50 square feet of walls plus 4 sq. ft. of ceiling. (This would give exterior dimensions around 5'+ wide by 6' high by 18" deep plus the hearth/firebox depth.) Extending the bell under the firebox would call for the width to be reduced a bit, and the same with extending into the sloped hood over the firebox.  Opening up to the hood space would let you move the riser out a few inches, though, to be closer to the firebox and reduce the port depth as Peter mentioned. For that matter, there is no particular reason to have full thickness of bell wall adjoining the firebox.
Glenn Herbert
gardener

Posts: 3665
Location: Upstate NY, zone 5
253
4
posted 2 years ago
With the constraint of not projecting farther than necessary from the (internal masonry) wall, Peter, what would you say would be the minimum thickness of the bell space? Would 8" for parts of it work, with other parts thicker at projecting under-hearth and over-firebox areas?
Gerry Parent
gardener

Peter van den Berg wrote:The one mistake which could be made is the depth of the port which isn't that well defined. As a rule of thumb, have the depth the same as the specified width within a 30% plus/minus tolerance.

Glenn Herbert wrote:With the constraint of not projecting farther than necessary from the (internal masonry) wall, Peter, what would you say would be the minimum thickness of the bell space? Would 8" for parts of it work, with other parts thicker at projecting under-hearth and over-firebox areas?


In my opinion, 8" feels cramped, it would be difficult to fit a 6" riser in. But in general, every horizontal cross section in a bell should be larger than 5 times the cross section area of the riser. Which includes the level where the combustion core is situated.
When you look at it, this definition sort of explains why a blind bench being part of the main bell works so effective. At the level of the bench the horizontal cross section is huge, so gas velocity is very low there. Even more so if the core is lifted above the bench on a sort of metal pedestal.

Gerry Parent wrote:Peter, I'm new to batch boxes and am curious to know how the depth of the port affects the venturi effect?


A venturi is a temporary restriction in the flow path. Make the restriction too long and it cease to be temporary anymore.
There's another, probably even more important effect: the sharp corners of the port seems to be important to create a smaller high velocity stream in the port itself. The sides of that stream appears to be slowed down, probably forming small eddies over its entire height. This might explain how the double vortex is formed, being slowed down at the sides while the middle of the stream goes fast forward, an artificial way to narrow the port so to speak.

The above conclusion is speculation on my part although it sort of explains why combustion becomes very poor when the builder rounded off the sharp corners of the port.

So in your situation Gerry, the port is about 44% shallower than its depth. The real disadvantage seems to start when this deviation is greater than 50%. In my experience, people tend to think there's a tolerance on the tolerance, so when I say 50 others think 60 is OK too. It isn't in reality, so I mention a lower tolerance to be on the safe side.

Peter van den Berg wrote:So in your situation Gerry, the port is about 44% shallower than its depth. The real disadvantage seems to start when this deviation is greater than 50%. In my experience, people tend to think there's a tolerance on the tolerance, so when I say 50 others think 60 is OK too. It isn't in reality, so I mention a lower tolerance to be on the safe side.


Thank you for that explanation of the ports air dynamics Peter. My brick corners are sharp and will stay that way.
So in short, my port depth is OK but could be improved to be more optimal. Seems to be an easy thing to modify and experiment with by adding another back wall/port thereby increasing the depth of the port. Will try that soon.