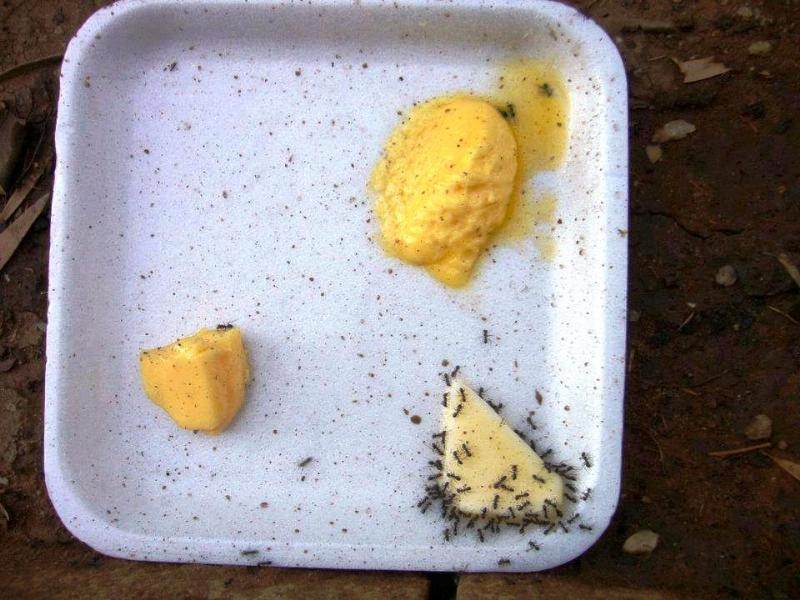 The yellow goo at the top is margarine.

The yellow goo at the left is "reduced fat margarine"

The stuff with the ants all over it is butter.

posted 10 years ago
The ants do not recognize the margarine as food.

There are no experts, Just people with more experience.

My uncle always said, "Raising beds is better than wetting them".

My attitude is that I trust a cow more than I do a lab technician.

Daniel Morse
Posts: 294
Location: SW Michigan
8
posted 10 years ago
My brother and I did this after we noticed the flies loved my toast in the morning. I use butter. He is a margarine fan. No flies for him.

So, we took a stick of each. On a piece of wood on the wood pile. The butter was gone right away. Ants, flies, chipmunks and whatever. The margarine just made a mess. I never liked margarine. I also have no health issues with my heart or such. I may be crazy, but I am a healthy big guy who happens to be crazy. It is basically plastic.

Anything my dogs sniff and sorta eat. I will not eat either.

Betty Montgomery
Posts: 52
Location: Lone Oak, TX
posted 10 years ago
Am I seeing things or are there a couple of dead ants in the melted margarine? Does that mean it could be used as an insecticide?

Ashley Handy
Posts: 108
3
posted 10 years ago
A few guys seem to have gotten a little side tracked. Maybe they are the not so smart ants. Look at those guys just sorta floating over there. I like to think they've got the margarine blindness-hahaha!

the same trick (example) can be used... with birds

posted 10 years ago
My aunt and her family have been margarine-crazy for as long as I can remember. I could never understand, and after that photo, I am confirmed in my position. I see a lot of people with the pro-margarine mindset also ascribing to the all-antibacterial soap all-the-time life philosophy, and I see, probably as a result of both practice and mindset, people with way more allergies to food and environmental agents than I ever thought normal. As to the margarine specifically, the only basis for the unhealthiness of butter that I can see is the same as that for animal fat, or lard. If the fat product you're taking is from livestock that is raised in a healthy way, the product will be good for you; if not, then not. I'd like to see some basis in numbers for this, but Paul has stated on at least one podcast that organic lard is almost a superfood for its nutritional benefits.

Dale Hodgins
Posts: 9002
Location: Victoria British Columbia-Canada
699
posted 10 years ago
In checking out products containing trans fats, I discovered that some brands of microwave popcorn are the worst offenders.

Some brands of margarine contain just a pinch of olive oil. The labels make a big deal about that ingredient. The unsuspecting consumer could easily be duped into thinking that olive oil is the principal or the only ingredient. >

Raven Sutherland
Posts: 167
Location: MAINE
2
posted 10 years ago
the order of ingredients on the labels indicates
the amount of each item

so if just a tiny amount of olive oil is in it
then it should be listed last.
Dale Hodgins
Posts: 9002
Location: Victoria British Columbia-Canada
699
posted 10 years ago

Raven Sutherland wrote:the order of ingredients on the labels indicates
the amount of each item

so if just a tiny amount of olive oil is in it
then it should be listed last.

True, but that doesn't prevent the usage of an "olivey" sounding name and a label which includes Italian scenery and architecture. The fine print indicates the 85% canola content.
Michael Radelut
Posts: 204
Location: Germany, 7b-ish
4
posted 10 years ago

Daniel Morse wrote:I also have no health issues with my heart or such. I may be crazy, but I am a healthy big guy who happens to be crazy.

Trust me, you're not crazy

And the things you might get a heart condition from are probably not the ones you're thinking about.
Michael Radelut
Posts: 204
Location: Germany, 7b-ish
4
posted 10 years ago

Chris Kott wrote:I'd like to see some basis in numbers for this, but Paul has stated on at least one podcast that organic lard is almost a superfood for its nutritional benefits.

we are designed by nature to burn fat like a rocket stove burns wood
Posts: 1
posted 5 years ago
I am a man who likes the taste of butter a lot better than margarine and the fact that butter is now quoted as being healthier than margarine is only a bonus.

In the UK, everyone likes to slather everything with butter or margarine, including all sandwiches.  Everywhere else in the world does not do this to that extent, sandwiches in continental europe never have any butter or margarine on them and they taste great.  I think the reason the UK does this is because they have some of the worst bread in the world.  But just because everyone does something, doesnt mean that you have to, if everyone starts cutting their nose off with garden shears, it doesnt mean it is right or a good thing to do.

Everyone quotes the term diet as meaning a "calorie controlled diet" but the real meaning of the term, is whatever your food intake is composed of.  Not eating too much butter should really be part of a normal healthy diet but if you want to eat lots of butter (I know some countries in europe like to cook with it a lot), then that is your choice.  But I dont feel we should be berating people who try to eat healthily and take care of their body just because they are not following what has become a societal norm (especially when that societal norm/ convention can have a detrimental effect on a person).  Some people like to try eat "cleanly" because they are training (again exercise is another aspect which should really form part of a normal, healthy lifestyle or it can just be a fun thing to do, with added health and aesthetic bonuses, after all, women do tend to like strong men with muscles) but at the end of the day, what people want to eat is their choice (and people are free to change their mind at any point and eat whatever they want, whenever they want).

posted 3 years ago
Here's a handy flow chart showing how margarine is manufactured. I think it may also explain why the ants prefer butter. 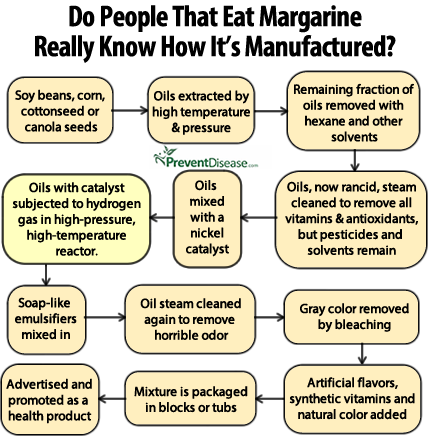