Range Recommendations for off grid with solar and gas

posted 2 months ago
We are looking to replace our old gas range. We aren’t looking for many extra bells and whistles in a new one, and especially not if they require much electricity draw.

Anyone know what a gas range with a digital clock, and possibly a convention fan would pull? It’s hard to reckon based on what the specs tell you online, which generally focus on the gas usage and BTus. My wife’s main complaint about the design of the current range is the broiler being on the bottom, but it seems that the ones with the broiler on top of the oven require a fan, which pulls electricity, but how much?

We have 2400w of solar panels, a single 4-string of lead acid batteries, and a diesel generator for backup power, which was all set up when we bought this place in December 2019. Basically, plenty of power when the sun shines, but not much battery so diesel power at night if it’s cloudy all day.

It’d also be nice to have a burner that can run somewhere between off and burning the hell out of everything. My wife is a great cook, and I like to cook as well, so something that is enjoyable and easy to use would be ideal, but it’s not like we are going to start a commercial kitchen. Also, getting away from a pilot light seems like a safety plus. My aesthetic choice would be a big old black cast iron beast, but those seem hard to find and probably had challenges of their own for the user. Thanks for your thoughts and recommendations.

posted 2 months ago
Hi Ben;  I've been off grid since 1983.  I've used a gas range(propane) all that time.
I don't think you will find exactly what your looking for.
It has been my experience its all or nothing. There are bare bones pilot lite models. (you can turn off the pilot and just use a match if you dare) We do..
Broiler will be on the bottom , there will be no clock and it will not need any electricity.
I suspect this is what you currently have and are wanting to upgrade.

In that case I recommend getting yourself a Kill A Watt  meter.  They read true power use. Easily available for relatively low cost.
Then comes the harder part.  If you are incredibly lucky the store will have a demo model of the stove your interested in AND if they will plug in... (that's a big IF )you can test it at the store.
Otherwise you will need to do what I did with washing machines.  Buy it , bring it home, hook it up and try it. I took back 3 machines before I kept the 4th.
If it uses to much , then bring it back for a different one.  Try and Try again....
I know big pain in the rear, but when you live off grid you have to stay within your power limits or just pour more fuel in your generator.
download-(43).jpg 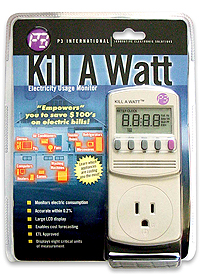 posted 2 months ago
The problem with newer kitchen ranges is the electronic ignition.....especially for the oven (the burners can be lit with a match).   The good news is that the ignition is only needed for a second. We have solar and have a 5 burner Frigidaire. It runs on LP.  One 100 pound tank lasts over a year. I have done something well outside the norm.  Our house is double wired. We are still hooked up to the grid.  We have blue outlets connected to the solar and the other outlets are connected to the grid. While our solar exceeds 2000 watts, I still want a security blanket.  It is needed for the AC.  My wife has respiratory problems that makes it essential.

Be the Mr. Rogers of your neighborhood.

Penny McLoughlin
pollinator
Posts: 155
89
posted 2 months ago
We're using an old Wedgewood stove from the late 1940's. We turned off all the pilots on the stove top and just light them manually. The safety valve for the oven was not working and wouldn't let gas to the oven so we removed it and just put a piece of hose in it's place. Now we can light and use the oven by turning on the temperature knob and manually lighting it at the oven burner.  It doesn't have a functional pilot either but the flame doesn't go out when the oven reaches temp just gets really low.

It does have the broiler on the bottom though.

Uses about 5 gallon of propane every month and a half and no electricity at all.

posted 2 months ago
I live in India where modern kitchens have gas stoves, but electricity is not very reliable, so most kitchens have a "gas lighter" which is a simple tool that makes a spark at the end of a shank. Pilot lights are not heard of; they would be considered wasteful. I don't know why these lighters, or I guess I should say "sparkers," are not commonly known in the US. I think they work with a magnet and a coil of wire, so when you squeeze the handle to jam the magnet through the coil, it generates a spark.

I found a nice one on amazon.com for you, that now I want to get too (for lighting my oven, which requires a long skinny lighter). But it doesn't seem to be sold by amazon.com, only by other sellers via amazon.
https://www.amazon.com/Torch-Piezo-Igniter-Inch-Long/dp/B013FGF1RW/

Search for "sparker for gas stove"

Compare with amazon.in in India, where dozens are offered, but I don't have to order one because every corner store has them for sale for under US $3.00.

I think they have close to what you want, but they are $$

Many on grid propane stoves have a glow plug for the oven that stays ON the whole time the burner is on so they suck a surprising amount of electricity.

Stacy Witscher
pollinator
Posts: 842
Location: Southern Oregon
210
posted 2 months ago
R Scott - Great link. I have been following this thread as we need a new stove in my house, the oven doesn't work. Our plan is to eventually have an off-grid propane stove for each house, and an electric wall oven for when we have an abundance of solar. Currently, the property has standard gas stoves, and too many unneeded electric appliances (trash compactor, dishwashers, etc.).