posted 4 months ago
Assuming that I would rather have my 2+ acre pond a different color than algae green,  what are some good options?  The university extension office wants me to drain my pond, dredge it, and then spray poison  all over it.  ...at a cost of several thousand dollars.  I have tried grass carp.  I have tried rye.

I am considering ducks.  If that is the answer, how many?
IMG_0327.JPG 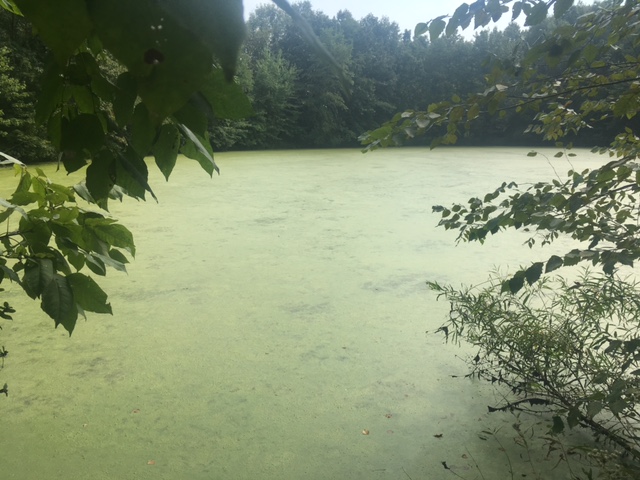 posted 4 months ago
If it's always going green I would look at why, is it getting fertiliser run off from anywhere? But to fix our little pond when it did that we added daphnia, it takes them a few days (or weeks in a larger pond) to get going, but then you go from algae green to daphnia brown.. and then it settles out clear as the food and the predators balance out.

posted 4 months ago
I think duckweed might slowly clean that up.  And provide some fodder for livestock.  Look up the research into using duckweed in water purification.  As Skandi mentions, fertilizer runoff is probably the cause.
r ranson
master steward & author

posted 4 months ago
My local farmer shop recommends spreading a light dusting of oat straw on top of the water.  He says the algae is gone in a few days.  He stresses it needs to be ORGANIC oat straw to work.

I never tried it.

posted 4 months ago
Without a doubt it is receiving run off. I am surrounded by farms.

Joylynn Hardesty
master pollinator
Posts: 3099
Location: Officially Zone 7b, according to personal obsevations I live in 7a, SW Tennessee
1165
I like...

posted 4 months ago
I think I spy some black willow leaves at the edge of your picture. One year when our pond had a bloom, I was told that as long as I have willow, my pond would have algea. We decided to keep the willow for it's aspirin attributes. The bloom eventually went away on its own. It's not a balanced eco system, some years it blooms again. Our pond is much smaller. Less than a quarter acre.

I never tried researching willow as being the culprit.

Edit: it was supposed to be caused by the catkins falling into the pond. Maybe the pollen can overload a pond? Dunno.

posted 4 months ago
You are correct regarding the willow.  I suspect , looking at the land contours,  that leaves may be a greater source of nutrients than run off.

The issue of the Willow appears to be a chicken or the egg sort of thing. Black Willows do well in toxic environments.   So, while they may not cause the problem, their presence is an indicator of what I already know .... things are not good.  A talk with a farmer pretty well summed up the problem.  He told to to toss a cup of herbicide X in it. It would kill off everything, and the pond would look pretty. Of course, using the pond to water my garden becomes a concern.

posted 3 months ago
The university and farmer want you to poison the algae?  Where is that poison going to end up? Adding to the dead zones in the river delta's in the ocean probably.

Grass carp are used for weed control, they eat your waterplants, leaving more nitrogen for the algae to bloom.. Adding pikes and other predator fish could help with that problem. Or empty it out, but then you get rid of everything, maybe catch them.

Get helophytes in there, preferably in a muddy bit which is undeep most of the year. Helophytes are plants that will oxygenate the mud creating a less toxic microbiome and suck up nutrients and compete with the algae . You can harvest those yearly to build compost on land. Same with the willows, before their leaves drop in the water just pollard them, they'll come back.
These two things might create an environment in which oxygenating waterplants get a chance to flourish. Add different kind of waterplants, the more diverse a system is the more stable it becomes. Then this plant will flourish, environment changes, hoops another one takes over. You can take them from other lakes where they flourish en masse in a canoe. Or buy them.

The pond can be helped by adding water from cleaner ponds and streams, just a bucket every time will bring stabilizing insects, bacteria, worms and what have you with it.

People in universities must know these tricks, they're insanely clever.

I have tried grass carp without effect.

What I did not mention in my original post, the present population of fish are stunted.  The pike make sense.

And as long as I am asking, how many buckets of quality pond water?

I suspect the run off would travel from the Little Wabash to the Wabash to the Ohio to the Mississippi to the Gulf of Mexico.  To be fair, I short formed my conversation with the university. Their extension office referred me to someone who wanted me to drain the pond and he would apply poison...for a pretty high price in more ways than one.

For what it is worth, I took a sample of water from the pond and put it under a microscope. I saw no single cell life forms ..or much of anything else. We do have frogs and turtles.

Jane Mulberry
Posts: 76
Location: East of England
30
posted 3 months ago
John, I read Hugo's comment as suggesting the grass carp may be part of the problem. Hence the predator fish to reduce the carp population.
S Bengi
pollinator
Posts: 3114
Location: Massachusetts, Zone:6/7, AHS:4, Rainfall:48in even Soil:SandyLoam pH6 Flat
323
I like...

posted 3 months ago
I recommend using this pump to aerate the water
https://www.septicsolutions.com/septic-parts/septic-air-pumps/hiblow-air-pumps/hp100ll_hiblow-hp-100ll-linear-septic-air-pump

Seeing as how you have a 2 acre pond, you will need two. This model listed above is the long life model. You can also get it in a DC version so that you can run it off solar panels, just contact the manufacture.

Septic systems have a similar problem of nutrient overload. So and to reduce that they aerate it, some of them go another step and add a 'bucket of sawdust/carbon'.

Just look up the advance septic system that HOOT have for inspiration.

posted 3 months ago
John F Dean, the grass Carp have eaten the remaining waterplants, waterplants that use the nitrogen in the water which you already have in excess. The waterplants were the ones keeping the pond oxygenated so algae eating insects like the daphnia and many others could live.
Without the grass carp things would have been better. As well they shit in the water, adding even more nitrogen.
Where the nitrogenwater comes in plant helophytes there, yellow flags and the like. They form dense clusters which might block the run off off debris. In time they'll make a small marsh with cleaning properties.
The pumps will S Bengi proposes will kickstart everything, but they can not make a sustainable ecological balance.
The buckets of water from healthy looking ponds and lakes i propose to add, are needed to repopulate your pond with a healthy ecosystem. Anything living in that water will find it's niche in your pond and if they get fed they will multiply like crazy. The more different healthy ponds and lakes you visit and take buckets of water from the more diverse and stable the ecology in your pond will become. With transplanting from other places many bacteria and waterinsects also enter your ecological system.

What a great businessmodel this pond fixer has, empty it out, get rid of the fish, poison the hell out of the water until it's flushed out by nitrogen rich water, the bloom will be back, rinse repeat.

I am considering ducks.  If that is the answer, how many?

If you're thinking Mallard domestics (what I refer to as "Noisy Ducks" because they "quack"), I would suggest none. They make a huge mess of any water they get near and will add more nitrogen.

I would suggest "duckweed" - Lemna. In the small pond the former owners built, wild ducks introduced the Lemna and it covers the whole surface in the summer which both sucks up the nutrients and blocks the light. The tadpoles in the spring seem to take care of any algae that starts.

If that works, then you can get ducks and skim the lemna off and feed it to them. It very nutritious (supposedly people can eat it too, but I don't see how I could clean it) and ducks adore it. I'm still not sure I'd let the ducks any where near the pond any time soon, but if you get a robust eco-system going, that will help.

I've read of a very polluted lake in China which a fellow cleaned up by putting floating rafts and growing flowers for sale. Anything that's known to absorb the nutrients and chemicals that you want removed.

Have you had the water tested, like you test soil to see what there's too much of and not enough of?

Where is the water coming from? If it's a stream entering, can you create an artificial wetland with lots of reeds and cattails to sop up the nitrogen as it enters? Cattails would make great mulch around trees or on paths, as you'd know they'd not be adding seeds that could survive. Again, if the water coming in is high in Nitrogen and phosphorus, but not heavy metals or other nasties, various parts of cattails are edible. The point is, if you try to reduce the N and P by growing plants, unless you remove a bunch of that plant matter from the water onto the land where you don't mind the N and P, if the N and P are coming from local farms, it's going to continue to build or go downstream unless you capture it. The book "Drawdown" talks about using cattails to capture those nutrients, and then harvesting it for alternative uses (biochar, biofuel, mulch, animal feed etc.) The "problem" is the "solution" sort of approach.

I misread your statement on grass carp.

My interest in ducks is only if they are a solution to the algae problem.