Spaghetti Sauce, Marinara, other Tomato based Sauces for Spaghetti - Share your favorite recipe

posted 2 weeks ago
Growing up, my mom always made meatballs and spaghetti.  When I married I continued making meatballs with marinara sauce.

At work, a bunch of us girls would go out to lunch on Fridays.  One of the places we went was a place called Italian Village where I always got their special lunch
which was spaghetti with meat sauce, a slice of cheese pizza, and spumoni, which is an Italian ice cream.

I liked the meat sauce so well that I quit making meatballs and started making a meat sauce instead,  I usually don't use a recipe for my marinara sauce.

For a meat sauce back then I would just add a pound of ground beef.

This recipe has some really interesting ingredients and I have never found an Alton Brown recipe that turned out bad. 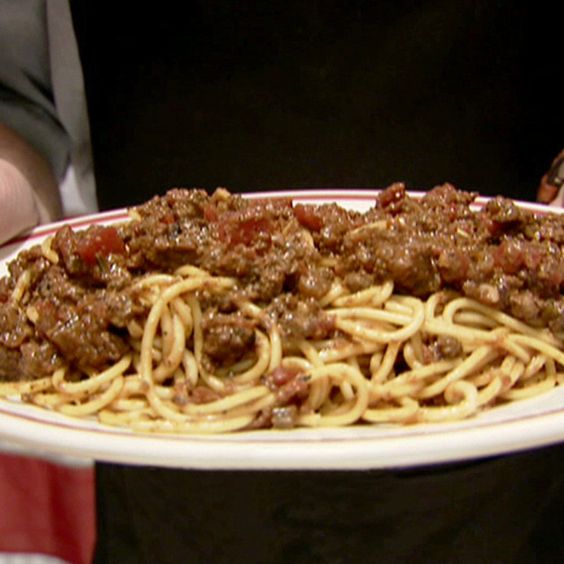 
For the meat sauce:

Place an 8-quart Dutch oven over low heat and add the bacon. Cook slowly until the bacon is crispy and has rendered its fat, 25 to 30 minutes. Remove the bacon from the pan for another use. Add the onion, salt, and pepper and stir to combine. Place the clove and star anise into a small spice bag, add to the Dutch oven and stir to combine. Cook, uncovered, over low heat, stirring occasionally, until the onions caramelize, 45 to 60 minutes. Add the celery and the 3 cloves of minced garlic to the pan and continue to cook over low heat until the celery is semi-translucent, approximately 30 minutes. Remove the spice bag from the pot.

Meanwhile, place a wide 4-quart saute pan, over high heat. Add 1 tablespoon of the olive oil and once it shimmers, add the beef chuck and the pork butt and cook, stirring frequently, until the meat is well browned, 4 to 5 minutes. Transfer the meat to a colander to drain. Return the pan to high heat, add 1/2 cup of the wine and deglaze the pan, scraping up any browned bits from the bottom of the pot. Transfer these bits and any remaining wine to the Dutch oven along with the meat.
Add another 1/2 cup of the wine, evaporated milk, beef broth, and mushrooms to the Dutch oven and stir to combine. Cover and cook over low heat, stirring occasionally, for 3 hours.

Once the sauce has been cooking for 1 1/2 hours, place the 4-quart saute pan over medium heat and add 1 tablespoon of olive oil. Once it shimmers, add the 2 cloves of sliced garlic and cook for 30 to 45 seconds or until fragrant. Do not allow the garlic to brown. Add the tomatoes, oregano, basil, and marjoram and cook until most of the liquid has evaporated, approximately 30 minutes. Add the remaining 1/4 cup wine, tomato paste, ketchup, vinegar, and Worcestershire sauce and stir to combine. Decrease the heat to low and simmer for 30 minutes. Increase the heat to medium high; add the remaining 1 tablespoon of olive oil, and cook, stirring constantly, for 2 to 3 minutes.

Transfer the tomato mixture to the meat mixture and stir to combine. Simmer the sauce, uncovered, over low heat, stirring occasionally, while preparing the pasta. 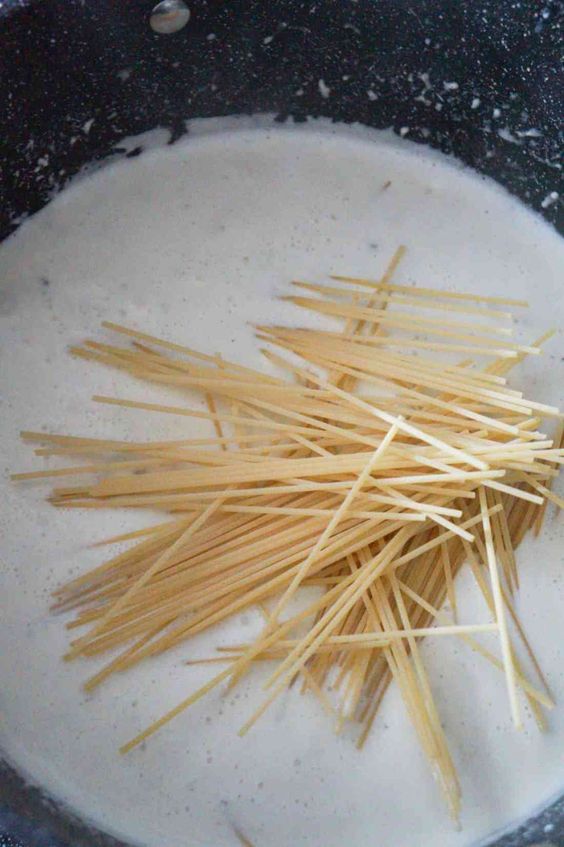 Bring the water and salt to a boil over high heat. Carefully add the pasta, stirring quickly to separate. Cover and return to a boil, being careful that the water does not boil over. Once boiling again, uncover and continue to cook until slightly less than al dente, 5 to 6 minutes. Drain in a colander.

Add the pasta to the meat sauce and cook, over low heat, for another 2 to 3 minutes or until the pasta is al dente. Add the Parmesan cheese and toss to combine. Transfer pasta and sauce to a serving bowl or individual bowls and serve. 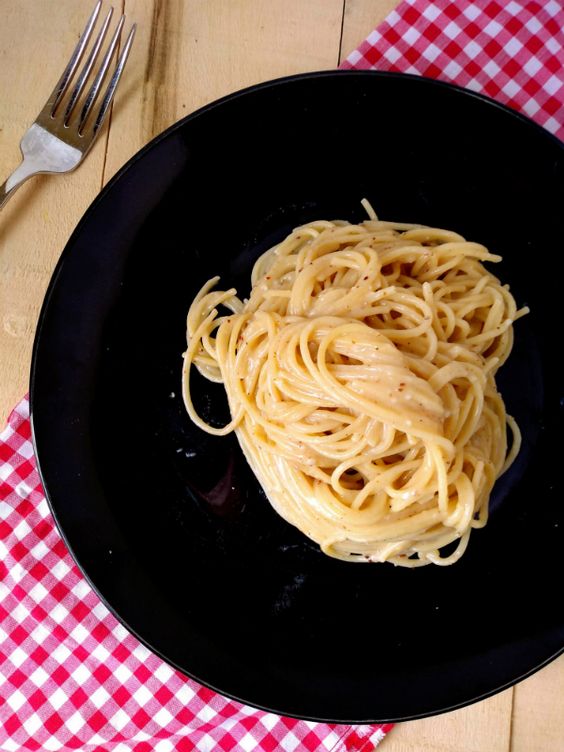 Put tomato puree in a large pot.
Remove sausage from casings, brown over medium high heat, breaking up while cooking. Add to pot.
Sweat onion and bell pepper in pan with sausage fat until soft, about 20 minutes. Add to pot.
Add remaining ingredients to pot, cook for 6 hours.
I pressure can this in 1 1/2 pint jars. It's the perfect size for 1 lb of pasta.

Sweat onion and carrots in olive oil for 20 minutes, until soft. Combine everything in large pot, simmer for 4 hours.
I usually pressure can this in pint jars. Often I mix it with half and half or cream to serve.

Put tomato puree in large pot with garlic slices, half and half or cream, thyme, salt and pepper. Cook bacon until render and crispy, put in pot. Sweat onion, celery, and carrot in bacon fat, put in pot.
Brown meats, put in pot. Simmer for 1 1/2 hours.

Use in lasagne or with fresh tagliatelle. I usually freeze half of the sauce for another time.

bruce Fine
Posts: 942
30
posted 2 weeks ago
havin g to white the drool off the keyboard
I lover good marinara sauce
If making from scratch I
start with crushed tomatoes
basil
oregano
onion
garlic.
my biggest problem is I think I cook it too long
never could get a homemade sauce as good as some of my favorite Italian restaurants, none of which are chains.
which I won't name here unless asked
Ellendra Nauriel
pollinator
Posts: 465
180
posted 2 weeks ago
I have to make my own sauces, because of food allergies. It was a challenge to come up with a spaghetti sauce recipe that did not include peppers or onions, but eventually I came up with one that's good enough no one notices what's missing.

(This recipe assumes dried herbs. If using fresh, use your best judgment.)

Note: If you plan on letting this simmer for a long time, hold off on the oregano until 5-10 minutes before serving. It turns bitter if overcooked.

Peel the garlic and slice it thin. Saute the slices lightly in the oil, until they just barely change color. Add the meat and brown it, stirring frequently. When the meat is browned, add the herbs except oregano. Let them cook for 1 minute, mixing constantly to keep them from burning. Add tomato puree and bouillon. Heat until it starts to simmer, then add molasses and oregano. Let it simmer a few minutes, then taste, and add salt or more bouillon if needed.

Dianne Justeen
Posts: 51
Location: Allentown, PA but we bought off-grid property in Newark Valley, NY
12
posted 2 weeks ago
We had a big crop of delicious tomatoes in 2020 so I canned a bunch of puree that was earmarked for sauce.  Grew stripped Roman's from Johnny's for the first time and it was a favorite.  Flavorful enough for any fresh eating but surprisingly large fruits of a paste shape and type.  To save space I peeled them by blanching, squeezed out as much of the seeds as possible and then pureed them and cooked them down to a thick puree.  I water-bath canned them without salt but with 1 tblsp. lemon juice to make sure there was enough acidity.  This tastes great straight out of the jar so I don't do much to it.  Here's my "fast" sauce which tastes more like a long cooked one because of the pre-processing of the puree:

If I want a more traditional marinara I start with sauteeing chopped onions and celery, then add the garlic when the other veg are translucent. I add some tomato paste which I "fry" in a little added oil, then add puree, broth (veg or meat, whatever floats your boat), dry red wine, basil, oregano, a little fresh parsley if I have it and a whole carrot for sweetening (which gets pulled out at the end)  When done I adjust acidity with a little sugar and correct salt and pepper.

My personal opinion about cooking time is either do a quick sauce, which I like with fresh tomatoes, or a really long cooked sauce.  Because in between doesn't work for me.
Lew Johnson
pioneer
Posts: 93
Location: Japan
33
I like...

posted 2 weeks ago
I hardly ever cook by recipe, but there are some concepts I follow when I make tomato sauce.

In my mind the classic marinara flavor comes from a combination of tomatoes, celery, onions, and garlic.

I start with something that has fat in it, either ground chicken thighs, or butter, or oil.

Get that warm (and if I'm using meat then I brown it first).

Then put in the celery, onions, and garlic. I also add vegetable ingredients based on what we've got - add mushrooms, eggplant, spinach, bok choy, etc.

Then I add seasoning, at minimum salt and pepper, but I often add some ketchup here.

And let all of them caramelize.

Once caramelized I add canned tomatoes, then simmer until it's a nice saucy consistency.

Julie Reed
pollinator
Posts: 302
68
posted 2 weeks ago
No recipe to share, as I never make it the same way twice. It’s always dependent on what ingredients are at hand. But one thing I learned about acidity, if that’s a problem, is to peel and core an apple, and cut it in half. The two halves go in the sauce for the entire time, and get removed at the end. The apple absorbs or neutralizes the acidity. The other ‘weird’ thing I do, is use about 1/4 cup of blackstrap molasses. This will slightly sweeten the sauce, but what it really does is add a surprising richness to the flavor.
nancy sutton
pollinator
Posts: 910
Location: Federal Way, WA - Western Washington (Zone 8 - temperate maritime)
71
posted 2 weeks ago
I can take or leave tomatoes, so have had no real urge to can or freeze a bunch.  (But I like to grow them!).  I recently tried roasting them, and found they were totally delicious!  Next summer, I'll roast a batch as often as possible, then puree the reduced amount, and freeze for future sauces.  Also, will keep skins, seeds, gel, etc, as I think that's where a lot of the nutrients are, and the handy dandy stick blender 'disappears' them  :)

BTW, Martha Hazan's extremely popular recipe - NYT - "just simmer a can of tomatoes with an onion and five tablespoons of butter. Add a pinch of salt and pull out the onion at the end, and you’re left with a bright, velvety tomato sauce with a rich roundness from the butter. The butter doesn’t saw off the edges of the tomatoes’ tanginess in the way that sugar does; instead it complements the brightness and makes it shine.  This tomato sauce is also entirely hands-off; you don’t even mince the onion. It’s a great way to knock a meal together with a few cupboard staples. Serve it over pasta with a flurry of cheese, and enjoy tomato sauce with the flair of restaurant richness ..."

I'll have to try it... can't imagine why it is so popular.

Yes, I didn't really mention this in my list of concepts, but it's a really good point.

Tomatoes are full of sugar and umami. They're also full of water, which dilutes both. If you boil off most of the water you get tomato paste. If you've ever tasted straight tomato paste, you'll know how intense the flavor is. I like to aim for 50% of the way to tomato paste. Just enough water left to let the sauce move around the noodles.