Growing Cotton in The Great White North - Yes, it is possible to grow cotton in Canada!

r ranson wrote:I know I'm monologuing, but I hope you don't mind.  I just find this project so interesting.

One thing I noticed about my cotton harvests is the colour is nowhere near as intense as it should be.  My greens are coming out creamy, my whites, brilliant, and my browns as tans.  I wonder what I can do to increase the colour?  Maybe something is missing from the soil?

When I was weaving with Sally Fox's organic color grown cotton yarns I remember hearing that the colors would darken in time, and some, especially the 'rusts' appeared to after weaving and washing, etc.  According to this article below, there is a big change in color from boll to yarn.

The color of the fiber changes as it goes from harvest to finished product. In my photo, you can see a boll each of brown and green cotton and the yarn that resulted from each color. Once cotton has been spun, it must be boiled to set the twist. At that time, the color deepens. What is on the spindle in the photo is green cotton. You can see how much darker the finished yarn is.

posted 2 years ago
I'm looking forward to the cotton colour getting darker with washing.  I've read that adding a touch of washing soda or other alkali substance to the wash water will help intensify the colour.  Maybe one day I'll try boiling it, but right now my cotton is heading directly from the wheel to the loom.

Most of the seed I got came with a bit of fluff.  Here are some comparison photos of the green and the brown.  Neither fibre has been finished. 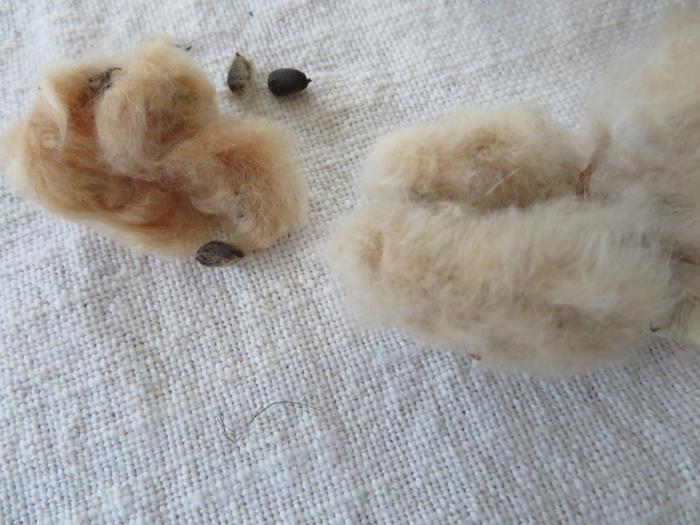 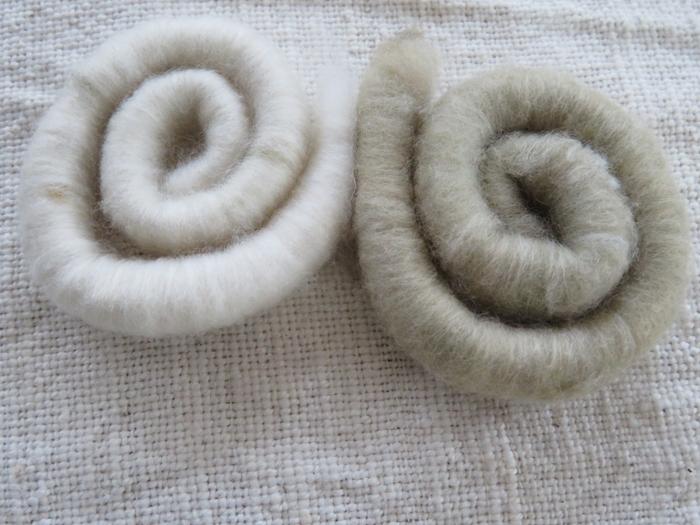 The cloth for the background is made with a handspun weft (half the yarn is handspun) - some from what I grew, mostly commercially prepared fibre.

With the green, the fibre around the seed is really green, but the fluffy stuff I use for spinning is off-white.  Losing that much colour in one generation, could I suppose, be genetic variation.  But to happen for several different kinds of cotton from different sources?  I think there's something in my environment that's changing the colour.  But hopefully, it will get stronger when the cloth is finished.

posted 2 years ago
I was wondering about cross pollination possibilities.  Everything in books I've read so far says it's a selfer with a low chance of cross-pollinating (about the same as tomatoes).  But I hear about laws against growing coloured cotton in some places because it could contaminate commercial crops.


At the time, I didn’t realize the distance that was needed between varieties so they wouldn’t cross and I had them separated by only 100 feet. The isolation distance recommended for home use is 650’ and for commercial production a half mile or more. I was only growing it for fun and concentrating on learning to spin, so at first I didn’t notice just how much mixing was going on in the garden when I planted back the seeds I saved from one harvest to the next. Once I took notice, I realized that my original colors that you see in the name tag I wove from my early cotton would be lost if I didn’t pay attention.

Most of my colour problem is from the first generation after commercial seed.  I haven't compared the second generation yet because they all look off white now.

What is interesting is I'm growing mixed varieties in a tiny greenhouse with lots of pollinators.  This means I have a much higher chance of mixing genetics than I had hoped.  This is great because a landrace would be a great path to find/create cotton that will thrive here.  I've already shown it can survive to reproduce, now we discover if I can make the plant thrive!

The plan next year is to make one greenhouse purely naked seed brown varieties (the seeds are incredibly easy to remove from the cotton compared to the fuzzy seed ones).  The other greenhouse a mix of seeds I've saved with over half being naked seed.

Studies that I've read measured cross pollination rates in cotton at around 1% to 13% for adjacent plants, and estimated that a 30 foot isolation distance was sufficient to maintain purity.

So yup. Seems like there is plenty of potential for landrace cotton. Especially if the naturally occurring crosses happen to have hybrid vigor and out-perform their self-pollinating peers.

posted 2 years ago
Thanks Joseph, that's good to know.

Reading back through this thread, it seems I've come across a lot of contradictory information on how cotton procreates.  We have some sources saying the pollination happens before the flower opens.  Others say half mile isolation.

I think I need to just stop reading about it and start dissecting flowers.  Which means I might need to increase the amount I grow this year so I can really play around with it.

Kathleen Sanderson
pollinator
Posts: 1290
Location: Green County, Kentucky
106
posted 2 years ago
With all the side trips to look at other websites, it took me a couple of hours to read through this short thread!  I plan to try growing cotton once we are moved to Kentucky (don't think it would work very well here in the high desert).

posted 1 year ago
Here's a video about growing cotton outside the cotton belt.  Not quite Canada, but he has worse weather than we do, so I think there is some neat ideas here.

Bryant RedHawk wrote:I think you are to far north for a cotton crop.  Since I live in cotton country I will describe the season here in the South.  Planting of cotton occurs from the end of May through the middle of June. The crop flowers in July, bolls are set and they don't open until September, the crop comes off the fields starting at the end of September through October.  The bolls are sharp when the cotton is ready to pick, many a hand has been shredded by the act of hand picking cotton. To separate the seeds from the cotton you need a gin which can be purchased as a hand powered unit or electric motor type, from there you have cotton fiber and lint covered seeds.  (a gin is pretty much a lot of circular saw blades rotating in opposite directions, the blades look like a plywood blade (lots of teeth). A linter (the machine that gets the last bits of cotton off the seeds is the same as the gin but with the blades nearly touching) these things have been known to eat arms of the operator in the old cotton mills.

If you are determined to grow cotton that far north, you will need a dedicated green house or two, you will most likely also need heaters for those buildings. Glass would be the glazing of choice for the cotton to grow well and you will need a bee hive for pollination  of the plants flowers.

If you are able to harvest cotton in early October when it is planted in May in the cotton belt, I might be able to grow early maturing day-neutral cotton where I live in Dayton, Ohio. The last spring frost usually hits no later than the first week of may here and the first Fall frost usually arrives by the second week of October. This gives me on average a 160 day frost-free growing season, but just to be safe, I would try starting the plants indoors in early April until daytime temperatures are above 70°F.

I have nevertheless found it difficult to find early-maturing, day-neutral, cotton seeds available in Ohio. This variety below looks like the most promising variety to grow where I live, but it is currently out of stock until December. It takes only ten days more to mature than many winter squash varieties:
http://www.southernexposure.com/red-foliated-white-cotton-1620-seeds-p-880.html posted 9 months ago
I haven't seen it yet, but someone suggested this video about growing and processing cotton

(I don't know if she has English subtitles up yet, but her other videos are amazing!)

j stein
Posts: 2
posted 4 months ago
Where can I buy cold tolerant cotton seed?  in Canada.

posted 1 month ago
Is there more to growing cotton than only the temperature (frost date)?
I never heard of cotton growing here in Western Europe. Maybe it's too wet? Or the soil isn't right?
Or maybe they never thought of it because the European countries all had colonies where they grew cotton ...

posted 1 month ago
The biggest problem growing it so far north is the days are too long.  Cotton seems to be quite hardy with moisture and temperature variation, but it needs shorter days to be able to set the bolls.

I'm thinking of trying it with some morning shade next year.  So it gets the sun at the heat of the day, but not so much light.

r ranson wrote:The biggest problem growing it so far north is the days are too long.  Cotton seems to be quite hardy with moisture and temperature variation, but it needs shorter days to be able to set the bolls.

I'm thinking of trying it with some morning shade next year.  So it gets the sun at the heat of the day, but not so much light.