What is this allium? I was told it was "wild garlic" but...

posted 3 years ago
A homesteader on my local facebook Homesteading group gave away a bunch of plants she called "wild garlic." But, when I look up "wild garlic" the plants I'm finding don't seem to look like what I have. It appears to spread by division, as there were a few growing in clumps, but the bulbs are all round...
106_8366.JPG
106_8367.JPG

posted 3 years ago
I was thinking it might be some type of leek! It looks a lot like my Elephant "Garlic," which is also technically a leek.

Perhaps these are Babington Leeks? http://www.incrediblevegetables.co.uk/shop/babingtons-leeks/babington-perennial-leek-bulbils/ Here's a piicute they post of the Babington Leeks they sell. 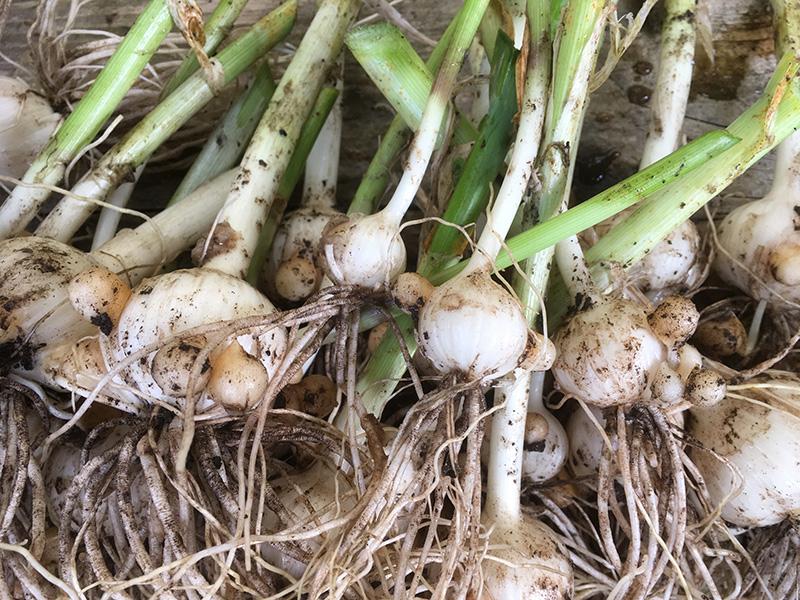 posted 3 years ago
It certainly could be a leek, but my guess is you may have a variety of garlic. It certainly doesn't look like the "wild garlic" that so often grows in lawns, especially here in the south, with their skinny round hollow green tops. The flat wide greens of the one in your picture I think puts it into a leek or a more traditional garlic family. I think it's garlic, with the bulb and a notably skinny neck turning into wide flat green parts. Here are two pics of alliums from my garden. The one on top is a type of leek, the one on the bottom is garlic. 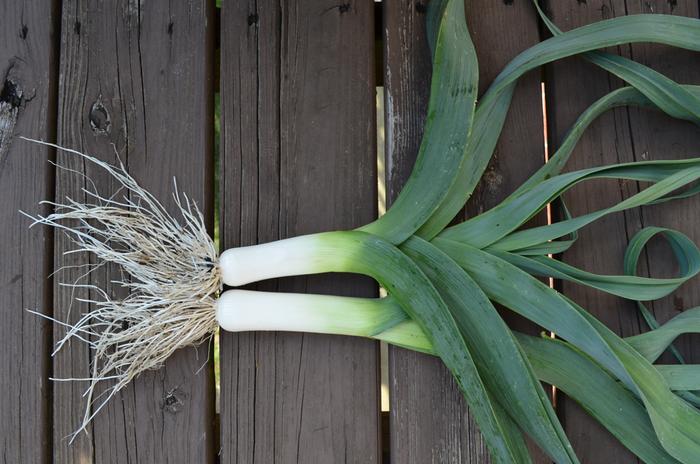 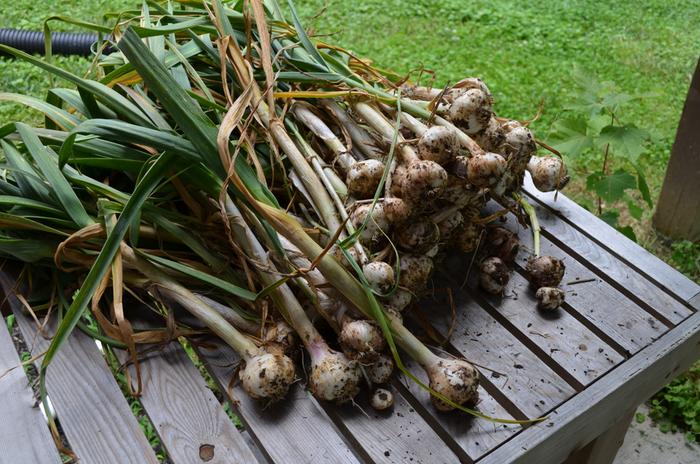 Joylynn Hardesty
master pollinator
Posts: 3455
Location: Officially Zone 7b, according to personal obsevations I live in 7a, SW Tennessee
1324
3
I like...

posted 3 years ago
I received an unnamed 'garlic" from someone's garden bed. It makes huge cloves, given enough time in the ground. Sometimes my plants look like yours when I pull them. At this stage the structure inside has rings like an onion, but the taste is emphatically garlic. When you have multiplied to enough plants, feel free to use them at this stage. It seasons perfectly.

The first time I first saw this, I replanted. The following season it had divided. So yours may simply be immature. As for the "wild" portion of the name, mine, 8 years later are popping up in places I never planted them. Natralized in my yard is how I would describe it. I wonder, do birds eat garlic bulbils? I've never observed it... but I wonder.

posted 3 years ago
I'm thinking this thing has got to be some sort of leek? It looks just like the elephant garlic (which is a type of leek) that my mother gave me.

Another interesting observation about this allium is that it LOVES growing in the shade. Not knowing where to plant it, and thinking it was ramps, I planted a bunch in our woods where it gets only dappled/filtered light. They're doing GREAT. The ones under my peach tree died. The ones in the garden bed (where other garlic are thriving) died. The ones I planted behind a wood debri pile (so mostly shaded) are hanging on, but not doing nearly as well as the ones in the woods.

posted 3 years ago
If you are lucky this could/should be perennial leek. Grows in clusters of 5 to 15 shoots in late august. Best propagated generative witch means cut flower heads.Its a winter hardy leek witch gives you middle finger tick leeks early April or March depending on the climate.

Anthony DiDonato
Posts: 24
posted 3 years ago
That looks a lot like a ramp if it had any had flowers that looked like the flowers of lily of the valley that's what they could be it depends on where they were found
Anthony DiDonato
Posts: 24
posted 3 years ago
Ramps are a shade dweller and like moist areas.
Bryant RedHawk
gardener

posted 3 years ago
I'd cut a leaf and do a smell test, if it is a garlic you'll know right away.

Chris Palmberg
Posts: 75
Location: NW KS/NE CO State Line
8
posted 3 years ago
When we lived in 4 Corners, Central Florida, there was a common landscaping plant that looked and smelled (even from the car) like wild onions.  It was planted heavily in the median at an intersection near our house.

A little research, and we discovered it was called "Society Garlic."  An allium, like garlic or onions, with tops that sub for green onions, and bulbs that are an extremely mild garlic.  The concept behind the name is that it was something that could be eaten by "society" ladies without creating offensive halitosis.

Ask me about my grandchickens!!!

posted 3 years ago
I took a bite of the leaves, and it's really mild compared to my elephant garlic (which it looks almost exactly like). I took pictures of both, but then my kids ran off with my camera, so when I find it, I'll post the pictures.

Anyway, the leaves taste a lot like garlic chives. A distinct garlic flavor, but pretty mild--it didn't make my eyes water like eating the elephant "garlic" leaves did.

I think you might be right! I went and looked up "perenial leek" and it looks a whole lot like mine. And, both perernial leeks and my plant had little baby plants coming out of them. I found a pretty informative site, here (http://living-mudflower.blogspot.com/2013/09/comparing-perennial-leeks-with-regular.html) about perenial leeks. It looks like they die back when it gets hot. Maybe the ones in my garden bed aren't actually dead, but will come back next year from their bulb?

Anthony DiDonato
Posts: 24
posted 3 years ago
Ramps are a wild leek that have a strong garlic smell but mild flavor
dirk maes
Posts: 112
Location: belgium
14
I like...

posted 3 years ago
Nicole
Perennial leek is a 'forgotten vegetable' in my own country Belgium, where it originates.
Thanks too the quality photo, i have been able to identify it .
It is a leek which is is resistant to much of the leek diseases .
Nick out the flower heads in April-May and they will produce shoots in the fall. They will grow during mild winters and spring. Its a hunger gap green so it will give fresh greens February till early April.
I have them for more then 20 years and there is no sign of degradation.
Too bee honest, its a real winner!

posted 3 years ago
Sorry .More info.
You have to dig them up early February-March,or early fall, depending on you're climate and replant them and in the same time select the best plants to propagate. There is just one baseline: the thickest plants do not  give the thickest offspring. It is a bit rare, i know, but  it is the way it is.

posted 3 years ago
Thank you, Dirk, for all the information! I'm really excited to have perennial leeks!

Nick Ryan
Posts: 14
Location: Granada, Spain
2
posted 2 years ago
Hi, I know it's a bit after the fact now, but the allium you're showing there looks exactly like the allium ampeloprasum that grows wild in Spain, across southern Europe and around much of the eastern Med. Funnily enough I joined these forums to ask a question about propagating them. Here in Southern Spain they have many names, particularly ajete or ajo porro or ajo puerro (garlic leek) and they appear in late autumn/early winter and flower early summer. The florets (?) - ie, the pre-flowering heads - are used in soups and salads. I love to use the bulbs and stems in spring, when they are really tender, in soups and omelettes. The question that I posted just now about them is whether the small bulblets under the skin of the bulbs and among the roots can be planted on as well as the seeds. Elephant garlic is another variety of ampeloprasum but has larger bulbs. Domesticated leeks come from ampeloprasum also. I think that's all pretty accurate.
Nicole Alderman
master steward

posted 2 years ago
When I got mine, I planted the little bulbs, as well as the big ones. From what I remember reading, the little bulbs tucked next to the big bulbs CAN be planted. They just take a little longer to reach maturity. There was a really neat article I'd read about Babington leeks and wild leeks and their propagation. It also went into how to tell the difference between babington leeks and perenial leeks (I'm pretty sure one makes flowers and the other doesn't). I'll see if I bookmarked it....


Here's a neat data table from the article. The whole article is really worth a read, as it goes into how to identify the different leeks by their bulbs/bulbils/bulbets/flower/etc. 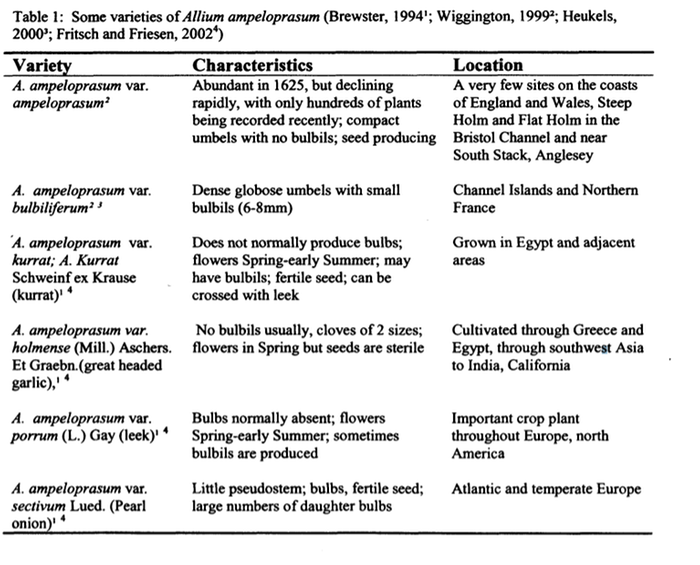 posted 2 years ago
Dr. Redhawk: "I'd cut a leaf and do a smell test, if it is a garlic you'll know right away."

This brings something to mind that may be useful. Pojar (NW plant ID book) and other sources I've read about NW edible plants suggest a smell test to avoid eating the native allium Death Camus. If it smells like an onion, its not death camus, a very toxic plant that looks to the untrained eye like another native, blue camas, which does smell like onion. I don't know of any dangerous native nw plants that smell like garlic, but of course my knowledge is not comprehensive.

330 pages on Babington leeks! I'm such a geek I'm actually gonna read it all! Thanks, that is awesome work.
Gwen Taylor
Posts: 1
posted 1 year ago
It's a ramp a cross between garlic and onion. They resemble a leak but are more garlicky smell. I have them on my grandmas property under trees and area stays moist from water running off mountain.