I think I have perennial potatoes

Despite harvesting all of them last fall, one of the beds volunteered so heartily that it looks like a deliberately planted bed.  Here's a pic with the deliberately planted bed diagonally in the foreground and the bed just behind it is volunteers.  I'm hoping they are purple because they tasted better.  I'm thinking they're purple because a tiny purple tuber could easily be mistaken for a rock and left in the ground.

If they are purple, I'm probably going to stop planting them on purpose and just let the volunteers do all the work from now on.
DSC04587s.jpg 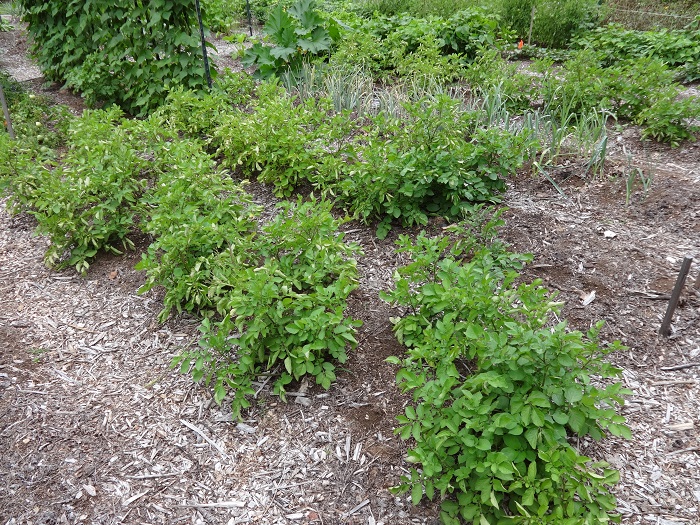 John Weiland
pollinator
Posts: 1823
Location: RRV of da Nort
358
posted 3 years ago
So my sister down the road from you living west of Eau Claire was claiming this was the first year she had volunteer beans.....BEANS!...after a Wisconsin winter.  I was skeptical, but she's growing with a lot of saved/adapted seed, so who knows.  That's pretty cool if you are getting volunteer potatoes.  Do you recall if they started to sprout through the soil at the same time that your planted stock emerged or was it sometime later?  Nice thing with spuds is you could just keep some behind in the root cellar....if the volunteers didn't come through in any given year, you could just plant that years as usual.  We are starting to see a LOT of volunteer tomatoes now that make it through to ripe in the fall.  And are thinking the same as you....how much effort should I put into the spring indoor seeding of transplants?

posted 3 years ago
Wow!   I was happy when I had a few volunteers this year in my temperate zone 7b.   Did you mulch your beds heavily for winter? I would think with heavy snow sitting on it for months they would rot.   Of course I assume any place above the mason dixon line is buried in snow all winter :)

I hope you'll follow up with the harvest - with volume and whether they produce average, smaller or bigger and better.  My bet is on better because my volunteer tomatoes are.

posted 3 years ago
I didn't keep track this year but last year the volunteers popped out of the ground within two days of the intentionally planted ones.  Mine usually have sprouts on them when I plant them.  I took that to be a good sign that I planted at the right time.

Volunteer beans would be a new one for me.  Tomatoes pop up all over the place, I think I have about 8 this year.  Usually they don't produce red fruit before Jack Frost nips them.  But I keep leaving them in the hopes of success.

With the Schlegel tomatoes I'm trying this year (Direct Seeded trial) hopefully they'll volunteer and we'll really be onto something.

Hi Susan, we mulch our beds a bit with probably an inch or two of chipped leaves with some grass clippings mixed in.  Not everywhere above the Mason Dixon line is snow covered all winter but we usually are from Thanksgiving till March.

Last year I tried to keep track of volunteer vs cultivated taters but it was a bit tricky.  I harvest a few weeks after the vines die down and they die so vigorously that it's hard to find them if I don't mark them.  So I could have been comparing robust plants to little ones.  And I harvested them at two different times.  The first 4 volunteers had double the weight per plant of the deliberately planted potatoes.  But they had more green potatoes and more grub damage.  The second batch of 4 volunteers had 8 good taters and 6 green ones.  My notes were poorer on that second batch but my summary was that volunteer ones were just as good and should be hilled.  Not sure if it matters but the deliberately planted ones were golf ball to 1/2 golf ball sized pieces.  This year I planted smaller full potatoes.

posted 3 years ago
Many years ago I started a garden in an old horse pen in North Carolina. It had been vacant for at least a few years. I found many small potatoes when I dug it up for the first time. They were very tasty & tender too. That's all I know about that. Except I'm back in tater country again!

posted 3 years ago
I have had potatoes and tomatoes volunteer for years for me. I have never tried growing beans, I will have to try it one of these days.

posted 3 years ago
Great news!  Keep that strain going.  Could be very useful for soil building as well as emergency food, if planted in odd corners of the garden.

Cristo Balete
Posts: 853
Location: In the woods, West Coast USA
144
posted 3 years ago
Some potatoes are like garlic, they have tiny bulbils and those will produce the next year.   What you're really lucky to have is no gophers eating them!!

posted 3 years ago
This year I planted 4 rows of potatoes and was feeling fine. Until all the volunteer potatoes started coming up in the bed where squash is this year. SO MANY!!! Potato 'pocolypse.  It looks like I put potatoes all along one side of our huge garden. Every year it seems I don't get them all at harvest and the next year little guys pop up. Which is cool because, y'know - free food and stuff. Next year will be ruthless culling of all volunteers, though, and potatoes will be planted in another bed far outside of my garden as I want to keep rotation up and keep working on the eradication of wire worms (we pulled this garden out of pasture land so wire worms haven't been a huge problem, but they have definitely made an appearance).

This year was also the first year that fennel reseeded and sprang babies up and there is just ever so much kale around this farm we jokingly call it kale acres.

When the world ends, I'll be in my garden, surrounded by kale and potatoes. And maybe that's not so bad.

Phil Gardener
pollinator
Posts: 336
Location: Near Philadelphia, PA
73
posted 3 years ago
After seeing springtime potato volunteers in my garden, I started fall planting potatoes a number of years ago.  Fingerlings seem to be the most reliable, and it keeps me from losing (or eating!) material stored inside over the winter.  It is amazing how early they come up, and they tend to mature early too.
William Schlegel
pollinator
Posts: 655
Location: Montana
234
I like...

Mike Jay wrote:Tomatoes pop up all over the place, I think I have about 8 this year.  Usually they don't produce red fruit before Jack Frost nips them.  But I keep leaving them in the hopes of success.

With the Schlegel tomatoes I'm trying this year (Direct Seeded trial) hopefully they'll volunteer and we'll really be onto something.

I wouldn't call the tomatoes I sent you Schlegel tomatoes Mike- they are all named varieties I just searched for the shortest season ones I could find! They might work better, it was volunteers from longer season plants that got me thinking about direct seeding tomatoes. Shorter season parents should work better as volunteers or as direct seeded! Though I have moved on a bit to trying to actually find some hybrids using Joseph Lofthouse's promiscuous pollination methodology. I feel like if our tomatoes can actually evolve in our gardens we may get the local adaptation we want. To me that means somewhat promiscuous tomatoes that are direct seeded year after year.


I grew some potatoes from true seed in 2017 and decided to just leave them in the ground to see if they would survive. A very few did. No true seed production yet though. I tried to direct seed a few potato seeds last year and didn't get anything.

Western Montana gardener and botanist in zone 6a according to 2012 zone update.
Gardening on lakebed sediments with 7 inch silty clay loam topsoil, 7 inch clay accumulation layer underneath, have added sand in places.