A type of nitrogen fixing corn that is native to Mexico that might be big thing in the coming years.

posted 3 years ago
This link is to the whole paper in downloadable PDF form. Plosbiology

posted 3 years ago
Joseph Lofthouse….are you getting seeds to add to your landraces?  :)

posted 3 years ago
The idea of 20' tall corn growing in terrible soil by fixing it's own nitrogen is pretty darned fantastic!

Now it just needs to be a short season, cold hardy perennial!

posted 3 years ago
So far corn growing to 20 feet sounds great but I think it would be better to have each stalk put off 6 ears of corn rather than the usual 2 or 3 ears.
I can see this research heading to such a point that we can grow more produce in less space than we are currently able, that would lessen the acreage needed for feed corn, people eating corn and fuel corn.
I can also see this research being utilized to create many other crops that used the part of the genome for nitrogen fixing mucus generating air roots.

posted 3 years ago
I would love to see six ears on each stalk, but if that happened 10 to 20 feet off the ground, that would be great for animal pressure.

Of course, you know what happens to sweet things in nature. Something comes along and thinks it's delicious. I could hope that the mucus would become a favourite of pollinators, but in all likelihood, if you pack that much sweetness into one place, something is going to come to eat it, and in numbers.

Especially, I think, if this new corn with sweet mucus-spewing air roots, or whatever plants are bred with this new innovation, is widely adopted in places where no such food abundance was possible.

Don't get me wrong. I would love to see these new air roots on heavy feeders like squash or beets, or anything that doesn't go veggie when too much nitrogen is present. But I would urge caution, and expect unintended consequences.

Greg Martin wrote:Joseph Lofthouse….are you getting seeds to add to your landraces?  :)

My collaboration network has checked our corns. We are already growing the mucus producing corns. Seems to be a heritage trait that The Conglomerate has eliminated in their corns. People like me, that are growing traditional corn, still have the trait in our landraces.

We haven't actually tested the mucus to see if it contains nitrogen. Test kits are commonly available in nursery stores, so we might do the testing one of these days.

In studying my corn with this trait in mind, there is also a pocket of moisture near the leaf nodes. I suspect that area might provide better conditions for the growth of the nitrogen fixing bacteria. The plants are extending root tips into that area.

posted 3 years ago
Fantastic Joseph!  Would be interesting to see if seeds from the plants expressing this trait perform well on poor soil.  Which of your landraces have this?

I wonder if anyone has tested the protein content of the corn and the amino acid mix.  Would be neat if this corn has complete protein, at least one might expect this corn to have higher protein content.

Greg Martin wrote:Fantastic Joseph!  Would be interesting to see if seeds from the plants expressing this trait perform well on poor soil.  Which of your landraces have this?

All of my landraces have some degree or other of this trait in them. I haven't been selecting specifically for this trait, but not against it either. They might be self-selecting to some degree, because I do not add fertilizers, composts, or mulches to my fields. The trait is more prevalent in  Harmony grain corn, Unity flour corn, and high carotene flint corn. They have a higher concentration of South American genetics in them, and are larger/taller plants than the sweet corn populations where the trait isn't so prevalent.

One reason for which this trait might be selected against, is that the knot of roots doesn't break apart easily, or break down easily, so the knot persists in the garden well into the next growing season, even with tilling.

Posts: 5732
Location: Cache Valley, zone 4b, Irrigated, 9" rain in badlands.
2319
posted 3 years ago
The other place where I think that nitrogen fixing bacteria might live. Especially in an arid climate like mine, is inside the leaves that surround the nodes. There are air-roots in this area, as well as moisture.
corn-air-roots-interior.jpg

posted 3 years ago
Just replying to follow. But this is incredible. Thanks for the link to the paper Dr Redhawk.

posted 3 years ago
So, if someone wants some nitrogen-fixing corn, buying some of Joseph's landraces is a great place to start!

Edit: Do you know which of your sweet corns has the most nodules? Or, can the flint, grain, or flour corn be eaten as sweet corn? I obviously don't know much about corn!


Nicole Alderman wrote:Do you know which of your sweet corns has the most nodules? Or, can the flint, grain, or flour corn be eaten as sweet corn? I obviously don't know much about corn!

Too funny!!! I was intending to pick my corns this year, and pay attention to this trait, and  select for the largest best developed air-roots. And I have already picked 3 of the 8 varieties without it even occurring to me in the field. There are so many selection criteria already!!! I still have one sweet corn to pick. It's got the highest percentage of South American genetics in it, so maybe I'll remember to pay attention.

posted 3 years ago
Joseph, if you do collect seeds from sweet corn with air roots and are interested in seeing how they do in a humid environment then I have that here in Maine!  My silver dimes are ready to ship!!!  Thank you again for the great stuff you're doing.  :)

Creighton Samuels
Posts: 543
34
3
posted 3 years ago
I was thinking of repurposing some of my large front yard into a three sisters corn spiral this spring.  But I'd love to try this cultivar, if actually available.

Don Tipping
Posts: 2
Location: SW Oregon
4
posted 3 years ago
This is an interesting discussion. Aerial roots on landrace corn with diverse genetics is common. We have at least a dozen strain of indigenous corn with this trait. Using the term Nitrogen fixing can be misleading. My colleague, and fellow plant breeder, Walter Goldstein of of the Mandaamin Institute in Wisconsin prefers the term “Nitrogen Efficient “ and has been doing large scale field trials with this trait crossed into modern field corns from the landrace Mexican strains. The mucus observations are correct, but little is understood about the precise mechanisms for transporting atmospheric Nitrogen into the soil in a meaningful way, although it’s thought to be an association with endophytic bacteria. It’s worth exploring Goldstein’s work in this regard.
I too admire the work of Joseph Lofthouse and think that much undiscovered benefit lie within growing diverse populations rather than uniform hybrid prima Donnas.
Check out the Mandaamin website. https://www.mandaamin.org/

For the Earth,
Don Tipping

posted 3 years ago
Joseph, I am interested and I am also in a dry climate.

i can also help with local corn, we have local varieties, and I can check if they have this charactericitic, if only I know how to check!

My goal is to feed animals first. I have imported organic corn, so it costs me 17 E for 25 kgs, much more than chemical gmo corn!

I am growing 4 varieties of corn in the same patch. Oaxacan green, Hopi Pink, Hopi Turqoise and Hopi Blue. First 3 from baker creek seeds and the hopi blue from native seeds search.

I read about Joseph Lofthouse's corn varieties and enjoyed how easy he made it sound to make a landrace. So I decided  to attempt to make an acclimatized variety to my area by open pollinating these 4 varieties.

It looks like this one plant so far is developing this trait and the fluid is oozing from the aerial roots. i'll try to attach a photo...
root1.jpg
root2.jpg 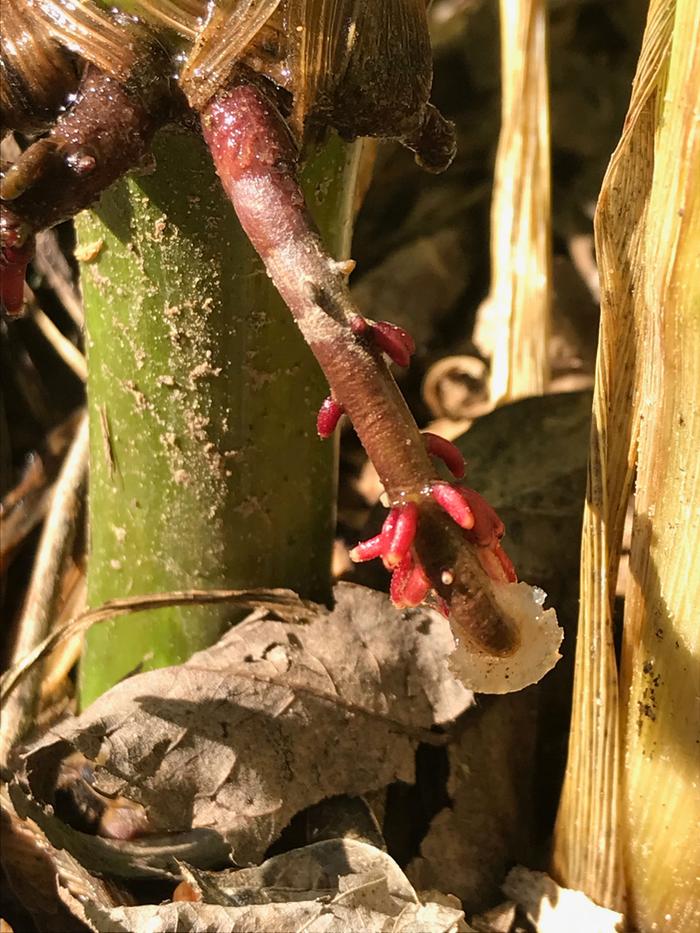 posted 2 years ago
Thank you Fish!  Lovely :)  Do you know which variety this one came from?  Or have you already done the crossing in a previous year and this is from the crossed pool?

Fish Farley
Posts: 28
Location: Zone 8b TEXAS
14
posted 2 years ago
Ha, I knew that was going to be asked. I don't know which one it is yet. Because when I sowed the corn I intermixed the green, blue, turquoise, and pink seeds into the same holes. I put about 5 seeds in each hole and then thinned it to about 3 mature plants. I'm guessing that it is the oaxacan green on the reason it is pretty much taller than all the others. And as far as I know the hopi corn plants can be relatively short. Also the tassels and ears are yellow/green, not red/purple/pink colored like many of the other plants.

I'm very curious how the ears will turn out. I've never grown corn and have never intentionally crossbred several colors. So it's all an experiment. I'm also not watering the corn at all. It's interplanted with beans and 3 different watermelon varieties that I am also open pollinating for future acclimatized seeds. Ledmon, Ali Baba and Bradford. I feel like that one can't lose. Very delicious and old varieties that can handle the heat in Texas.
Fish Farley
Posts: 28
Location: Zone 8b TEXAS
14
posted 2 years ago
It is the tall plant in center. They're about 2 1/2 months from seed.
plant.jpg 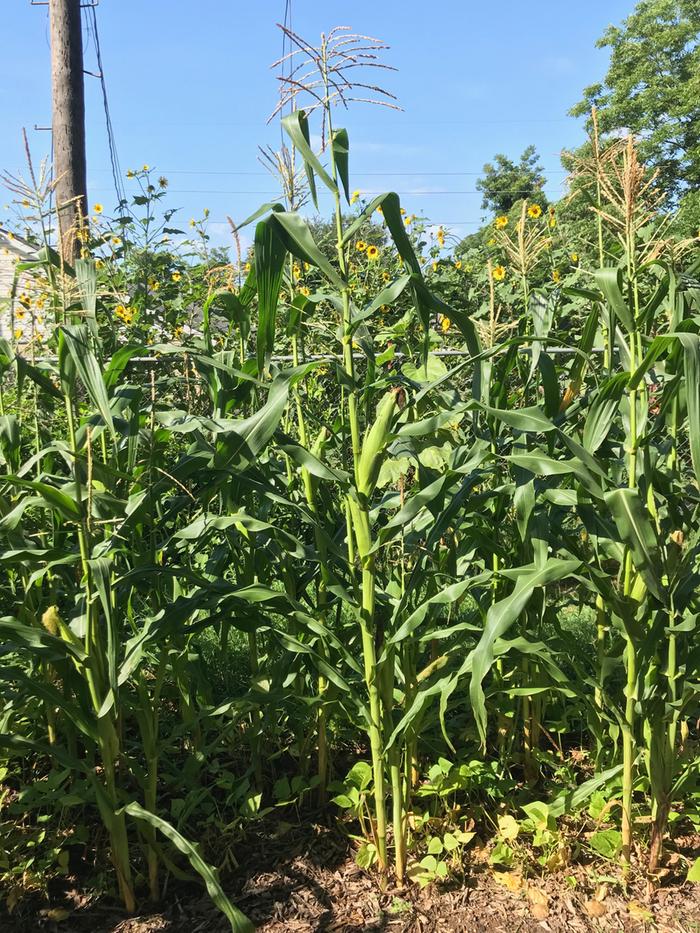 posted 2 years ago
I was in a Mayan village recently & saw aerial root corn growing in one of their milpa plots. I asked them about the aerial roots & they said that they had been selecting for them because the stalks do not tend to break as easily during heavy winds. The aerial roots can oftentimes serve as support limbs against the heavy winds.
When I touched the aerial root tips they were indeed quite mucousy!